In October 1807, Napoleon ordered what would become known as the "Emperor’s private service” from the Sèvres factory. Of the more than 230 pieces, this plate featuring one of the Louvre’s rooms will be auctioned soon. 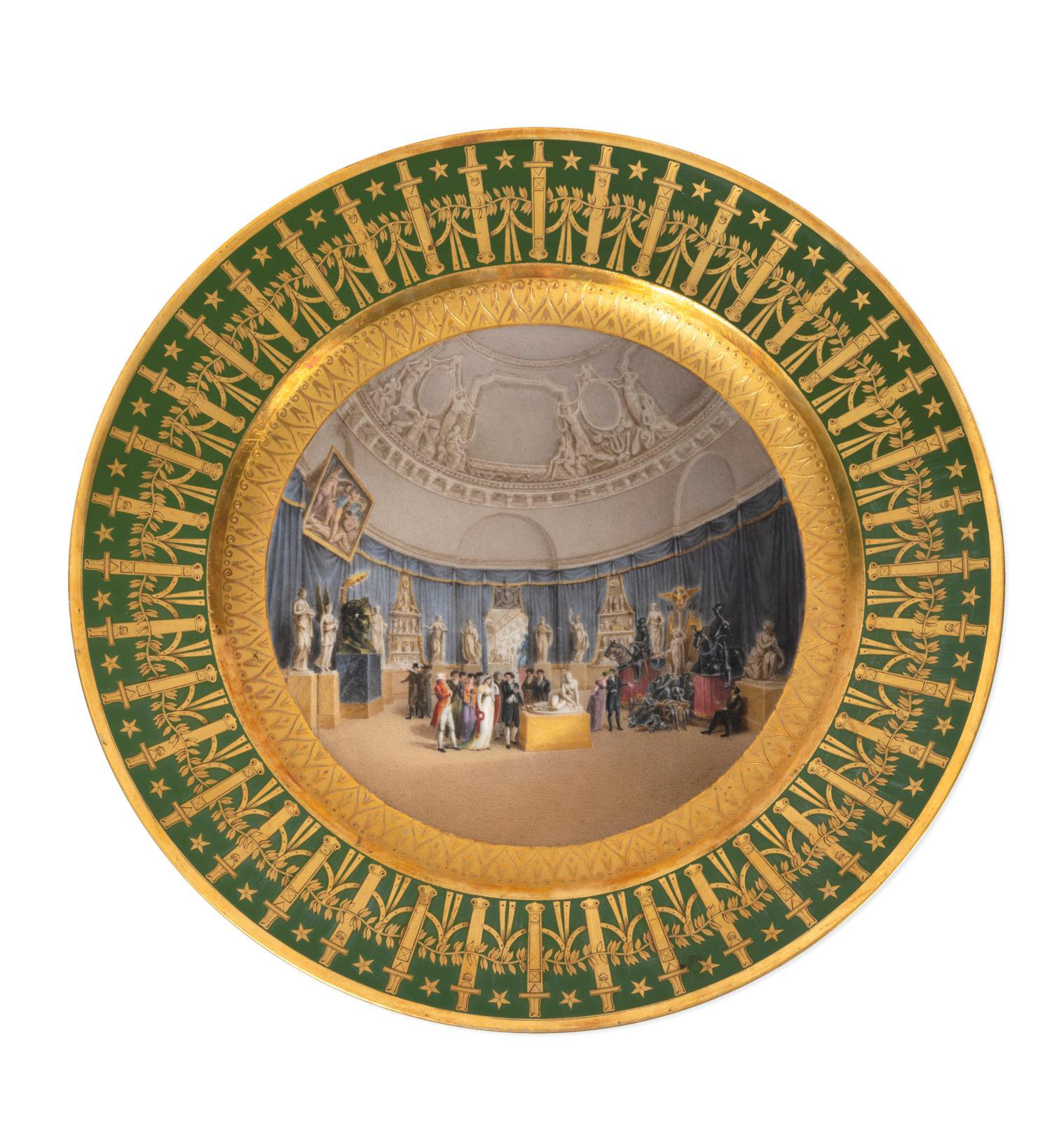 Manufacture impériale de Sèvres, 1808, hard porcelain dish, the rim decorated with a frieze of swords linked by a garland of laurel leaves and enriched by stars, the center adorned with a view painted by Jean-Claude Rumeau of Empress Josephine visiting the Victory Room at the Napoleon Museum, the bottom incised and painted in black with the "LL" monogram of Louis XVIII, diam. 23.5 cm/9.25 in.
Estimate: €200,000/300,000

Manufacture impériale de Sèvres, 1808, hard porcelain dish, the rim decorated with a frieze of swords linked by a garland of laurel leaves and enriched by stars, the center adorned with a view painted by Jean-Claude Rumeau of Empress Josephine visiting the Victory Room at the Napoleon Museum, the bottom incised and painted in black with the "LL" monogram of Louis XVIII, diam. 23.5 cm/9.25 in.
Estimate: €200,000/300,000

Napoleon thought big. Always keen to promote French arts and craftsmanship, he used them, in today’s parlance, as communication tools. Sèvres, which became a royal factory in 1759 and an imperial one in 1804, was indissociable from the sovereigns who funded it. From 1800 to 1847, its director was the brilliant, learned Alexandre Brongniart, son of the emperor’s architect Théodore Brongniart. He adapted to or even anticipated the ruler’s taste with new shapes, new colors, and hard porcelain as the main material. He created exceptional pieces, including some celebrating Napoleon’s campaigns and battlefield exploits. The "Emperor’s private service", from which our plate comes, is an example.

It depicts Empress Josephine visiting the Winged Victory, Nike of Samothrace Room in the Napoleon Museum, today’s Louvre, with Vivant Denon, its director, and possibly Talleyrand. The scene probably took place on October 14, 1807, the day the rotunda was opened. On the left, Lorenzo Bartolini’s colossal 1805 bronze bust of Napoleon is next to two ancient victories from Potsdam and Peter Paul Rubens’ 1614 painting The Triumph of Victory, now in Kassel, Germany. The plate also features works that had recently joined the collections: an odd pile of weapons, armor and ancient marbles such as The Family of Lycomedes and Woman Playing Osselets. Some were confiscated from the Church and aristocrats who had fled the Revolution, others plundered as war booty in Belgium, Italy, Prussia and Austria. After the Empire fell in 1815, nearly 5,000 pieces were returned to the countries whence they came.

"A Rarity on the Program"
Jean-Claude Rumeau (1777–1839), a painter of history, genre and interior scenes who trained with Jacques-Louis David and Jean-Baptiste Isabey, made our plate. He was associated with the Troubadour School, a group of artists who picturesquely depicted themes from the Middle Ages and the Renaissance. Active in Sèvres from 1807 to 1824, Rumeau reinterpreted the Good Knight, Merlin the Enchanter, Mary Stuart, Sleeping Beauty and Bluebeard. For the "Emperor’s private service", he illustrated two plates, including this one. The other, finished in 1809, features the Diana Room with ancient statues on display, the location of which is now unknown. Our plate was auctioned by Maurice Rheims at the Palais Galliera on March 7, 1967, and Yves de Cagny on June 13, 1973. "A rarity on the program in Room 10" wrote the Gazette de l'Hôtel Drouot at the time. It was presented with another plate from the same service, painted by Lebel in 1801, which depicts the military officers’ children’s school at Saint-Cyr, today property of the Napoleon Foundation. Both appeared in the "Napoleon" exhibition at the Grand Palais (June-December 1969). Ours has not budged since a French collector bought it for F74,270 (about €69,000 in today’s money). The plate served to illustrate an article by Gérald Schurr in the Gazette de l'Hôtel Drouot (October 17, 1975) about quality objects. On November 4, bidders, including, certainly, museum representatives, will vie with each other starting at €200,000/300,000. On July 6, two plates from the service appeared in a sale conducted by Fraysse & Associés. One, with a view of Rambouillet, was bought by an institution for €254,000. The other, showing the copper quadriga being removed from Saint Mark’s Basilica in December 1797 by Bonaparte, was acquired privately by mutual agreement by the Château de Fontainebleau for an undisclosed sum.

From Sèvres to Saint Helena
The prices may seem extravagant but at the time it was made, the service cost an astronomical F65,449. After giving Czar Alexander I the "Olympic service" featuring scenes from Greco-Roman mythology, in October 1807 Napoleon ordered another from the Sèvres Manufacture for his personal use. It was dubbed the "headquarters service" by his faithful valet Marchand when they left for Saint Helena, perhaps in reference to Napoleon’s field headquarters, some of which feature on the plates. The emperor chose 28 of the 72 subjects it includes. Brongniart and Vivant Denon selected the rest, which show other exploits, views of Paris, imperial residences, major institutions of the Empire and works in the provinces. Chemist Vauquelin created the green chrome tone, eight painters divided the artwork among themselves, and the Boullemier brothers gilded the friezes. Each plate cost F425. Production lasted from January 1808 to March 1810, just in time for the banquet at the Tuileries Palace celebrating Marie-Louise and Napoleon’s wedding on April 2.

Four years later, the 72 plates were sent back to Sèvres to have the symbols of the First Empire rubbed out and replaced by Louis XVIII’s monogram. In June 1815, Napoleon was allowed to take 60 plates with him to Saint Helena, occasionally giving them away to members of his retinue. What luxury for a man who drank Chambertin cut with chilled water and consumed his daily dinners in 10 to 20 minutes! "If we stay at the table longer," he said, "it is the beginning of the corruption of power."

Tableware: The Essential Ice Bucket
Not to be missed
Pre-sale