A fine discovery is up for sale with the Beaussant Lefèvre auction house, this panel illustrates a favorite theme of the founder of Neo-Impressionism: people at work. 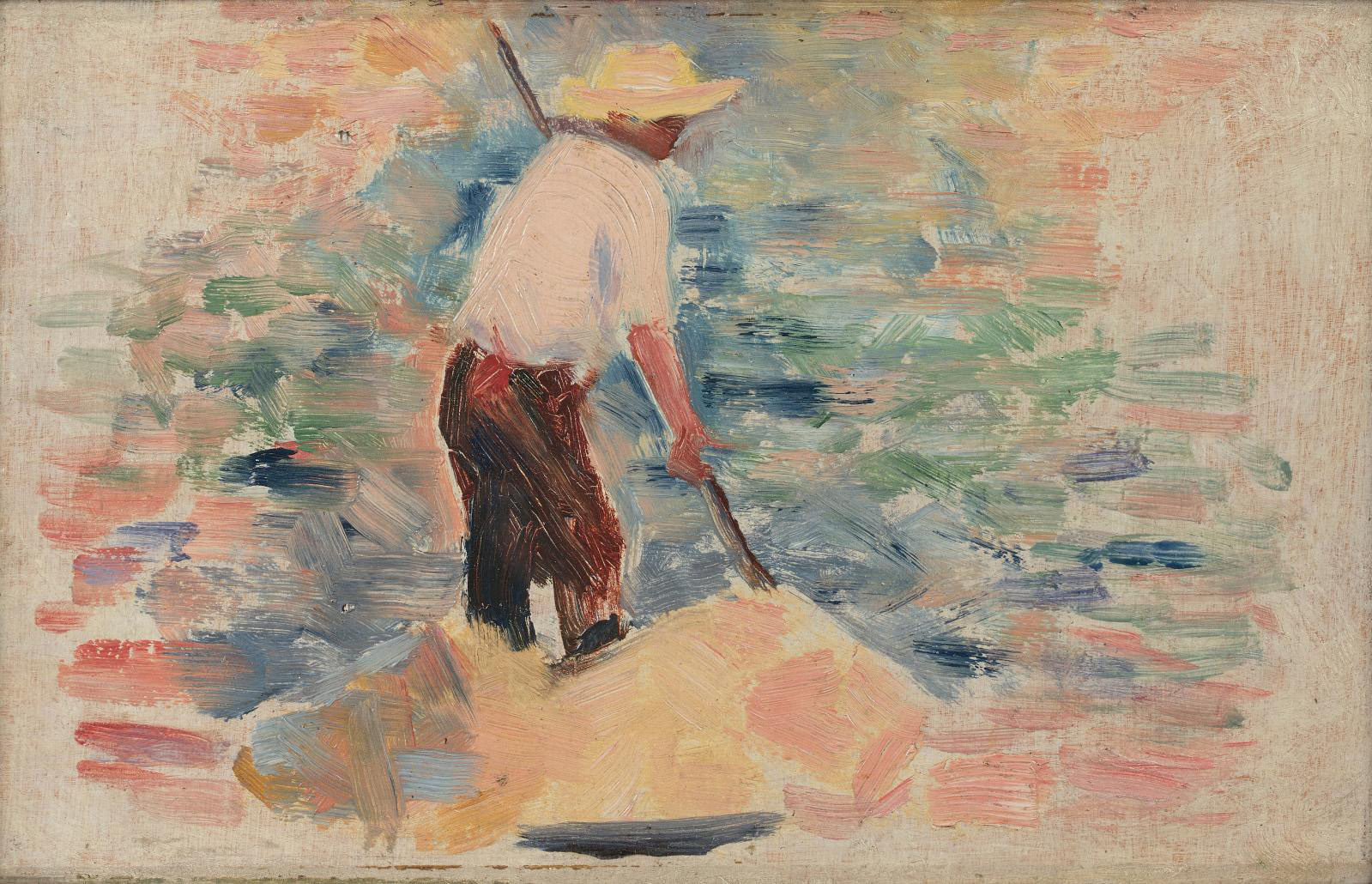 Long kept in a private collection, this painting should pique the interest of an international clientele. Rarity is expensive... A work in its own right, not a study for a larger painting, this panel by Georges Seurat shows one of the figures of working men and women he began producing in 1881 on wooden boards. He called them "little sketches", and stored them in a small paintbox. These small works feature stone breakers, mowers, gardeners, lumberjacks, diggers, haymakers and fishermen—as with the work here, Le Pêcheur (The Fisherman), also known as Le Balayeur (Sweeper). The way the man is holding his pole (known as a "lousse"), the two pointed piles beside him and the shallow water he is standing in suggest he is a salt-marsh worker. As always with the artist, the attitude is simplified, the movement suspended, and the figure shown in profile. The composition is simple and uncluttered. The salt worker is at the center of the work, and the light and darker colors are clearly opposed, from the salt cones to his hat. The palette is luminous and the pointillist treatment contrasts with the parts of the painting left blank. Here Seurat does not dwell on details or depict manual labor as such but venerates humble occupations and effort.

Charpentier Collection
In around 1883, the painter began to study the riverbanks and water that eventually became his favorite theme. Fishermen, bathers, and strollers populate the banks of the Seine in a complex play on line and meticulous stippling. These are the most famous works of an artist whose career was tragically short: only eight years passed between his first submission to the official Salon (1883) and his last paintings at the Salon des Indépendants, during which he contracted a fatal fever that killed him in a few days at 31. Born in Paris into a wealthy family, this shy man with insatiable curiosity had a single passion: painting. With seven large compositions (including Baignade, Asnières (Bathers at Asnières) Un dimanche à la Grande-Jatte (Sunday at La Grande-Jatte), Poseuses (Models) and Cirque (Circus)), he made a decisive contribution to the art of his time: the Divisionist method. The painting here belonged to the collections of A. J. Honig, Louis Vaumousse, and Albert Charpentier. This Parisian doctor and keen admirer of modern painting donated Claude Monet's La Seine à Vétheuil to the Louvre in 1937, and Edouard Manet's Anguille et rouget and Edgar Degas' La Classe de danse in 1951 and 1955. On March 30, 1954, 32 works from his collection were auctioned at the Charpentier Gallery, including works by Cézanne, Matisse, Marquet, Vuillard and Renoir, and a drawing by Seurat, Homme assis, du linge sur un cordeau (Seated Man with Washing on a Clothesline), which fetched FF1 M (€2,274,357 at today's value). A good omen for this salt worker, exhibited at the Paul Rosenberg Gallery on the Rue La Boétie in 1936, and at the Durand-Ruel Gallery, on the Avenue de Friedland, in 1934 and 1938.

Foujita on a Tapestry Background

Monet and Rothko: An Unprecedented Exhibition in Giverny
Newsfeed
See all news
UK’s Royal Albert Memorial Museum Returns Sacred Items to Siksika Nation
Moulin Rouge Windmill in Paris Becomes Airbnb Rental to Celebrate its 133rd Birthday
China: Discovery of the Oldest Portrait of Confucius
A “Pop District” is Coming to Pittsburgh
Not to be missed
Spotlight