A preparatory drawing from the Marquis of Lagoy’s fabulous collection reveals a little-known facet of the Antwerp master: he was also a vignette illustrator. This study is a concentration of his usual virtuosity. 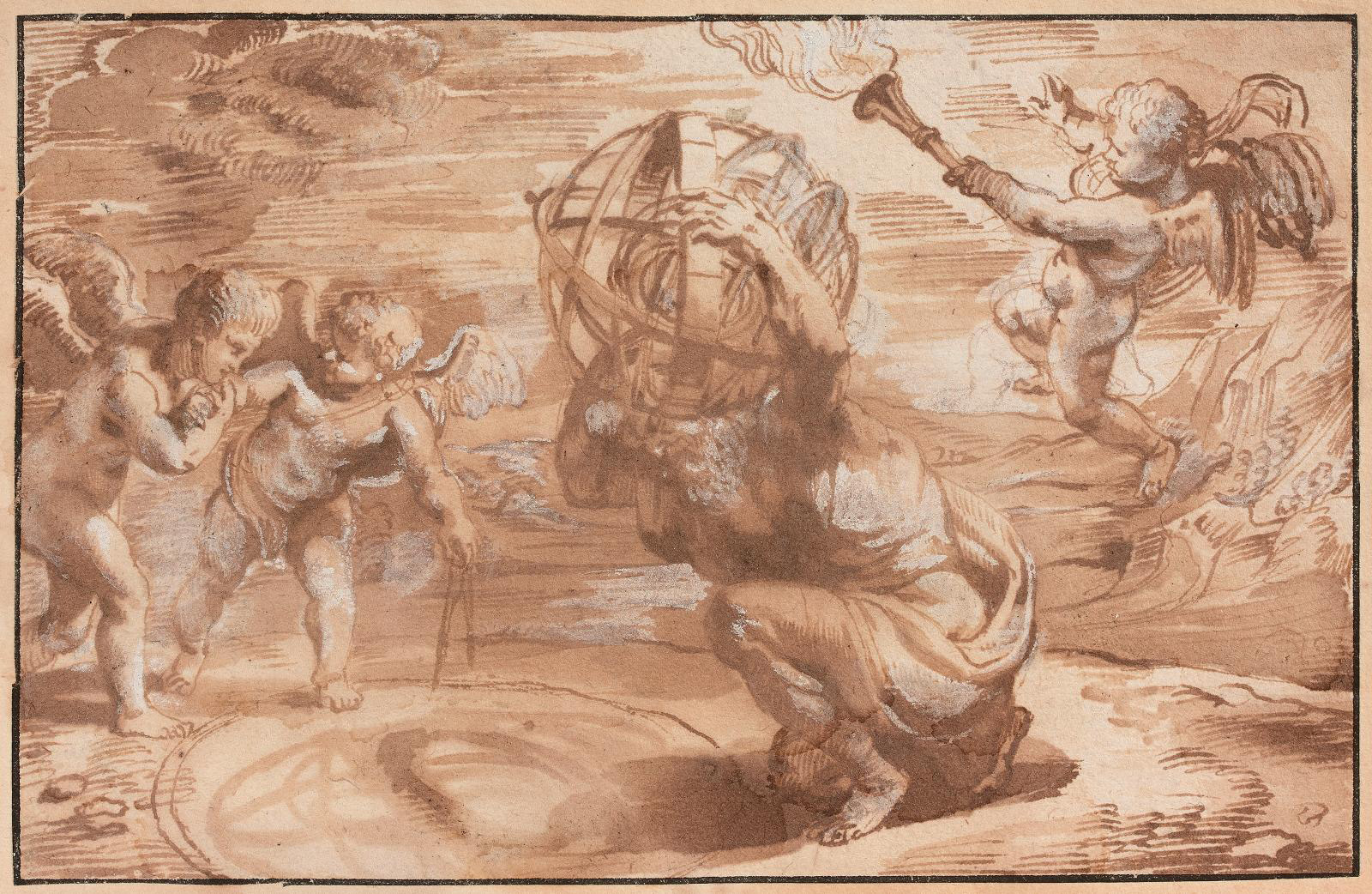 At first sight, the lively, whimsical scene may seem unfathomable: assisted by putti, a bearded man poses as Atlas, but on his back, the world is replaced by an armillary sphere. A fluttering putto holds a torch whose light projects the instrument’s shadow on the floor so that another can measure it with a compass and instruct a third. Everything becomes clear when one learns that this is a draft vignette for a scientific book by Franciscus Aguilonius (1566-1617), Opticorum libri sex. The creator of this playful scene in pen and brown ink, brown ink wash and white gouache highlights, grooved with a stylus, is Peter Paul Rubens.

This highly accomplished project began in 1613, when the Plantin press, headed by the famous Antwerp printers of the same name, commissioned the Flemish master to illustrate a work by Father Aguilonius, whose real name was François d’Aguilon. He joined the Jesuit order in 1582 and turned out to be a real genius: a physicist, theologian, architect and mathematician all rolled into one. He had a major influence on physics and became famous for his research on optics. Opticorum libri sex summarized his knowledge of the subject and, for the first time, posited the idea of stereographic projection.

The imposing 684-page book was just the first volume of this colossal work, the only one to be published in his lifetime. His publishers chose Rubens to design the frontispiece and six vignettes for the titles of the different sections. The frontispiece features mythological figures, while the headpieces depict a scientist performing various experiments assisted by putti. Rubens took inspiration from Otto Venius, his teacher, who in 1608 wrote Amorum emblemata, which was already enlivened by little cupids. Théodore Galle (1571-1633) engraved all these compositions but reversed the scene here in the final print. The work is all the more precious as only three other examples from the preparatory series are known: a draft frontispiece at the British Museum and two vignette drawings at Washington’s National Gallery. This illustration will be included in volume II of Rubens: the Drawings (1609-1621) by Ann-Mary Logan and Kristin Lohse Belkin, who have incidentally confirmed its authenticity.

Henri Lebasque at the Seaside
Newsfeed
See all news
French Culture Budget Increases by 7.5 Percent
€840M Collected for the Reconstruction of Notre-Dame
FIAC Announces its Artistic Program
1:54 Contemporary African Art Fair, Ready for a 9th Edition
Not to be missed
Spotlight
The Virtuosity of Flemish Manuscript Illuminators Radiates…
The art of the miniature reached such heights in 15 th -century…
Spotlight
Raden Saleh: A Dialogue Between East and West
Two cultures meet in the work of Raden Saleh, the Javanese painter…
Spotlight
A Table Commemorating the Liberation of France by the…
Mystery shrouds this unique, previously unknown table made in 1947…
Spotlight
A Treasure of Gold Coins Found in Brittany
In 2019, a couple and three stonemasons found a trove of coins dating…