This padlock is moving evidence of a highly prominent royal residence, unfortunately now destroyed. A small object with a big story. 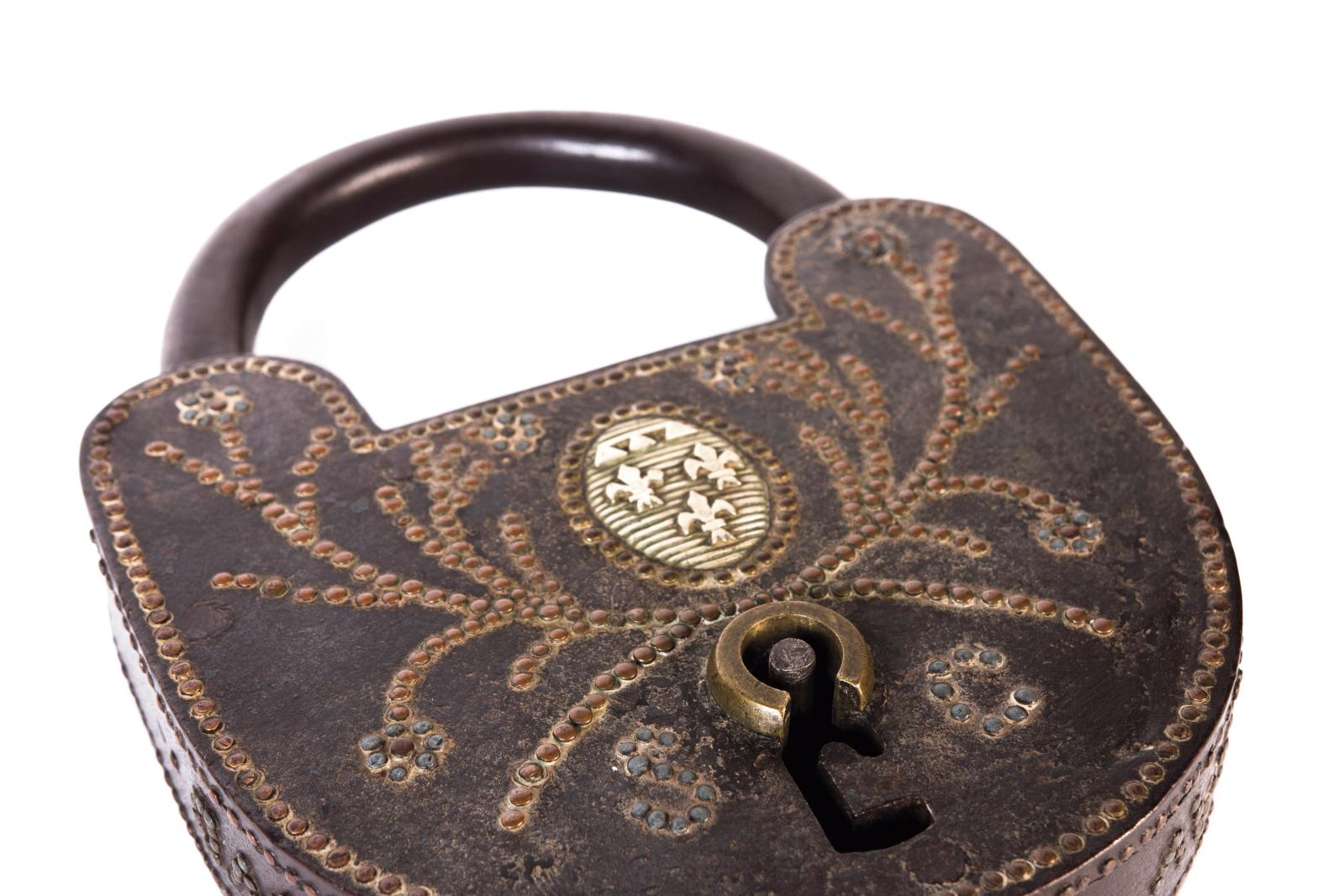 If ever the partisans calling for the reconstruction of the Château de Saint-Cloud (destroyed during the Franco-Prussian war of 1870) carried the day, work could begin on the strength of the padlock belonging to its main gate! For its studded decoration leaves no doubt as to its origin: this is a precious reminder of the glory days of this royal residence, the scene of many tales and twists until its tragic destruction during the siege of Paris in 1870, when it was used as the headquarters of the Prussian army. On the front, the brass and blued-steel nails delineate the arms of the Orléans family, which are surrounded by foliated patterns of stylized flowers; the back features a fleur-de-lys in a similar setting and "SC, Château de St Cloud, Grille" is written on the circumference. According to expert Pierre-François Dayot, this decoration is found on other locks—which rarely feature inscriptions—and especially on other objects with royal connections, like Marie-Antoinette's trunk, recently sold at Versailles, which bore the studded inscription "Chambre de la reine n°10" (sold for €43,750: Osenat auction house). This rare padlock and its key—providing further security—were bought by Raymond Jourdan-Barry (1891-1968) and have remained in the family collection generously expanded by his son Pierre, who died in 2016.

A Pampered Residence
We know that during the fatal fire of October 1, 1870, caused by shellfire, much of Saint-Cloud's furniture and artworks were saved. Empress Eugenie had anticipated the turn of events: seeing the Prussians advancing towards Paris, she had hidden away everything she considered most precious. The group of pieces belonging to the imperial couple was later sold at auction. On top of this, there are also all the items previously scattered, and those looted by the Prussians later... This means that objects from the Château de Saint-Cloud frequently turn up in the market and public collections, and can be authenticated through various inventories, paintings, engravings and even existing photographs. For example, the series of "Views of the most beautiful buildings in France" of c.1680—and a drawing by Adam Pérelle (1638-1695)—made it possible to identify the famous gate shown on the padlock. It was part of the main enclosure: the one closest to the castle (the furthest enclosure, belonging to the forecourt, had not one but two gates). The one here dates from the very origins of the dwelling in Saint-Cloud built by the Orléans family and remained there at least until the estate was sold in 1784 to Queen Marie-Antoinette, who made it her summer residence after various alterations. This gate and its indispensable padlock were thus central to the huge Saint-Cloud project launched by Monsieur, Philippe I, Duc d'Anjou and Duc d'Orléans, thanks to the generosity of his elder brother, Louis XIV, who gave him this "country house". The project begun in 1676 ended with his death in 1701. Architects Antoine Le Pautre and Jules Hardouin-Mansart, as well as painter Pierre Mignard, created a magnificent palace, the residence in turn of Philippe II d'Orléans (1674-1723), Regent of France, his son Louis (1703-1752), Duc de Chartres, and Louis-Philippe d'Orléans (1725-1785), who transferred it to Louis XVI for his charming wife. Ah, if only objects could talk...

One Collection, Three Preemptions
Not to be missed
Pre-sale