The Société des Amis du Louvre ends the year on a high note with the acquisition of Prud'hon's L'Âme brisant les liens qui l'attache à la terre: the artist's "last" and largest painting, classified as a National Treasure in May 2018. 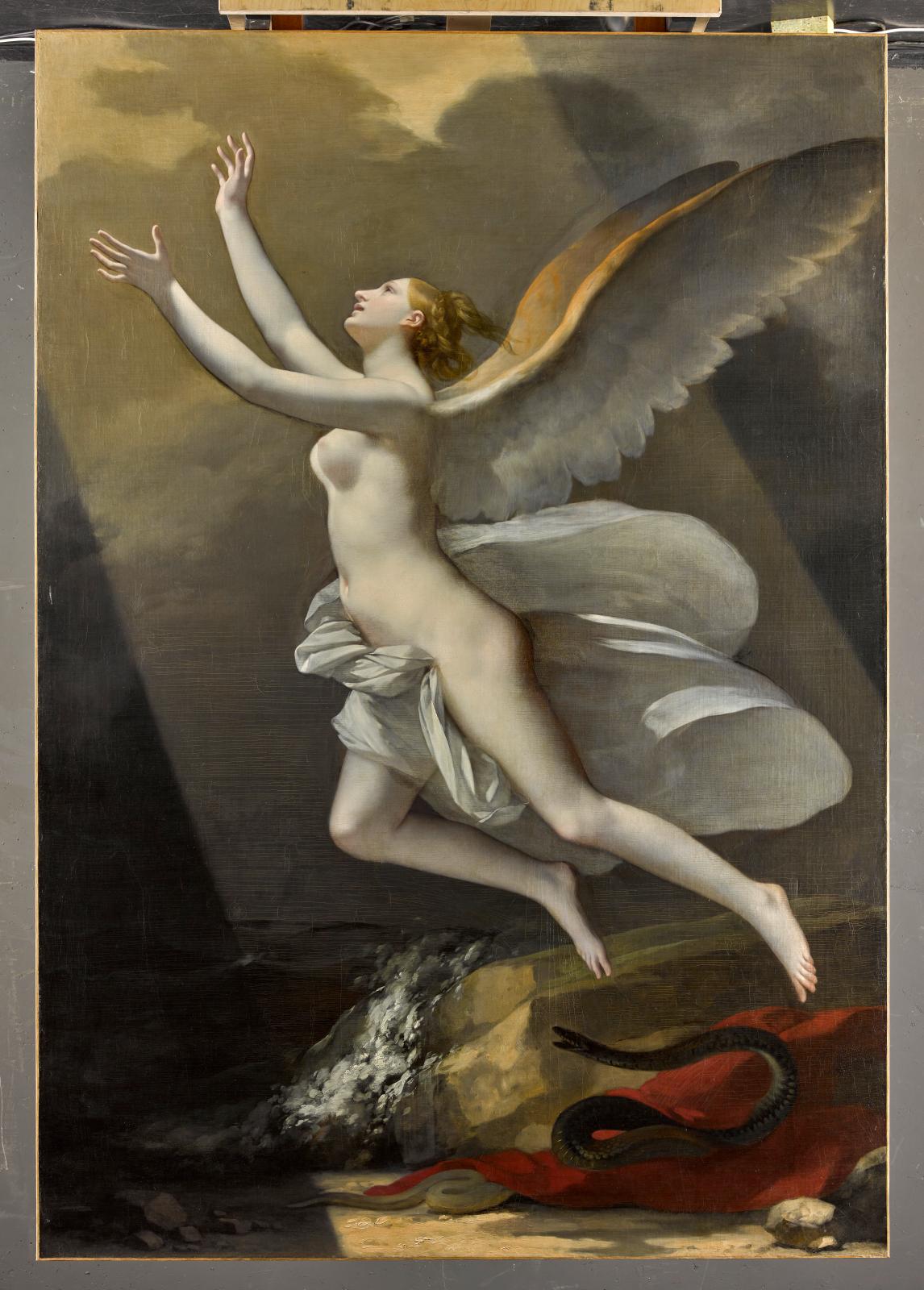 In a few weeks, L'Âme brisant les liens qui l'attache à la terre (The Soul breaking the bonds binding it to Earth) will join Delacroix within the red walls of the Denon wing, where the Louvre can now present all the major milestones in Prud'hon's career, to the great joy of the museum's Director of Paintings, Sébastien Allard: "We have been keeping an eye on this work for many years, especially Sylvain Laveissière, who had it restored at the time of the 1997-1998 retrospective, "Prud'hon ou le rêve du bonheur" ("Prud'hon; a dream of happiness"), at the Grand Palais and the Metropolitan Museum of Art." Listed at the painter's death in the studio of Charles-Pompée Le Boulanger de Boisfrémont, with whom he lived during his last months, and bought at his post-mortem sale by Pierre-Félix Trézel, one of his students, the work was subsequently owned by Eugène Devéria, then François Marcille, at whose home Delacroix saw it. "We see in Mr. Marcille's collection," wrote the artist in the Revue des Deux Mondes, "a very large painting , one of the poignant results of that time in his life, which, far from soothing his memories, brought their sorrows increasingly to mind, as we see (...) This beautiful soul, freed from its chains, rises languidly, a faint hope mingling with the cruel feelings of past grief in its lovely eyes. This painting is not finished. It was not meant to be. Undoubtedly, in working on this piece encapsulating his painful thoughts, he was totally unable to express all their bitterness and find relief."

A Noble Action
The son of an Orléans seed merchant, who married the daughter of the mayor of Étampes, François Marcille, a keen draughtsman, moved to Paris to spend time at the Louvre, copying works by Greuze or buying engravings of works by Prud'hon, who always occupied a central place in his life, and to whose critical success he considerably contributed. Henri de Chennevières left a colourful account of his home in Rue de Tournon, open to the curious and artists alike: "The clutter inside his house, where the day's purchases piled up randomly each evening, in no way detracted from the powerful impression created, and so it went on (...) We had lunch standing up; we sometimes ate dinner one by one, if there was no room at table for the new arrivals." Although he collected nearly 4,600 paintings, including thirty Chardins, forty Bouchers, eighteen Latours, fifteen Perronneaus and twenty-five Fragonards, Prud'hon was far more than a simple collector's passion for him. For in 1876, the "Marcilles", father and son, saved the painter's daughter from poverty by staging an exhibition at the École des Beaux-arts to provide her with an annuity for her old age. This noble action was reported in most newspapers at the time, and helped to make the painter's work popular again.

"How Can the Soul be Materialised?"
The painting's entry into the Louvre is important in several ways. The Director of the Paintings Department reminds us that "it is an unfinished painting in very good condition,, even if there are premature cracks, as always with the artist. But it is above all a very fine work, where he excels in the remarkable treatment of those pearly complexions that add to the image of the subject itself. How can a departing soul be materialised? Through a painting that is itself almost immaterial." The execution thus reflects the theme. In 1997, Sylvain Laveissière showed, with supporting documentation, that Prud'hon had conceived the idea of it before Constance Mayer's suicide two years earlier. But with the death of his companion, the theme took on an extremely personal and tragic aspect. Certainly, unlike the sketch for the Dream of Happiness (which the museum bought this summer through the action of Nicolas Joly), L'Âme brisant les liens qui l'attache à la terre is not directly related to their collaborative work, but provides proof of their attachment, says Louis-Antoine Prat, president of Les Amis du Louvre: "Whether or not he painted it after her death as a kind of catharsis, the composition reflects the darkness of Prud'hon's final two years. But even beyond its tragic context, it is a milestone in the history of early 19th century French art – as we are finding with the seemingly impossible task of deciding exactly where to hang it!" As Sébastien Allard explains: "It is a really interesting work, because it provides a link with Guido Reni, who had such an influence on French painting (many of his works are now in the Louvre) – but it could also fit very well in the Daru Room alongside Neoclassical masterpieces by David, Guérin and Girodet, or in the Mollien Room with great Romantic paintings by Delacroix, Géricault, Delaroche and Scheffer. This will be a truly tricky matter. " While Prud'hon's Christ on the Cross is in the Mollien Room, Justice and Divine Vengeance Pursuing Crime and The Abduction of Psyche are in the Daru Room. But whether or not it ends up near Ingres' La Grande Odalisque is not important: the Société des Amis du Louvre has achieved a small miracle just before Christmas, enabling L'Âme brisant les liens qui l'attache à la terre to join the two religious commissions Prud'hon painted in his twilight years for the French state: The Dead Christ and The Assumption. After being sold by François Marcille's descendants to Alain Le Gaillard through the Didier Aaron gallery, the work, "the highlight of the 1997 exhibition", and Louis-Antoine Prat's dream ever since, was acquired for the sum of €4 million.

A Splendid Acquisition for the Orléans Musée des Beaux-arts

High Bids for Prud'hon and Foujita
Newsfeed
See all news
French Culture Budget Increases by 7.5 Percent
€840M Collected for the Reconstruction of Notre-Dame
FIAC Announces its Artistic Program
1:54 Contemporary African Art Fair, Ready for a 9th Edition
Not to be missed
Analyses
Collecting Art: Morozov and the Russian Art Connoiss…
On display at the Louis Vuitton Foundation in Paris this fall, the Morozov…
Analyses
Great British Painter: Dame Laura Knight
From arguing for women to be included in life drawing sessions at…
Analyses
Recreating Cosquer Cave: An Underwater Archaeological…
Part of the paintings designed to adorn a replica of the Cosquer…
Analyses
In the Crosshairs: Luma Arles Cultural Center
There is nothing quite like the Arles cultural center, an offshoot…