Africanist-Cubist, Modern or Art Deco? Laurence Salmon's monograph, published by Norma, provides a chance to examine this free-spirited creator with a touch of the anarchic, who ignored the categories into which he has been relegated for too long. 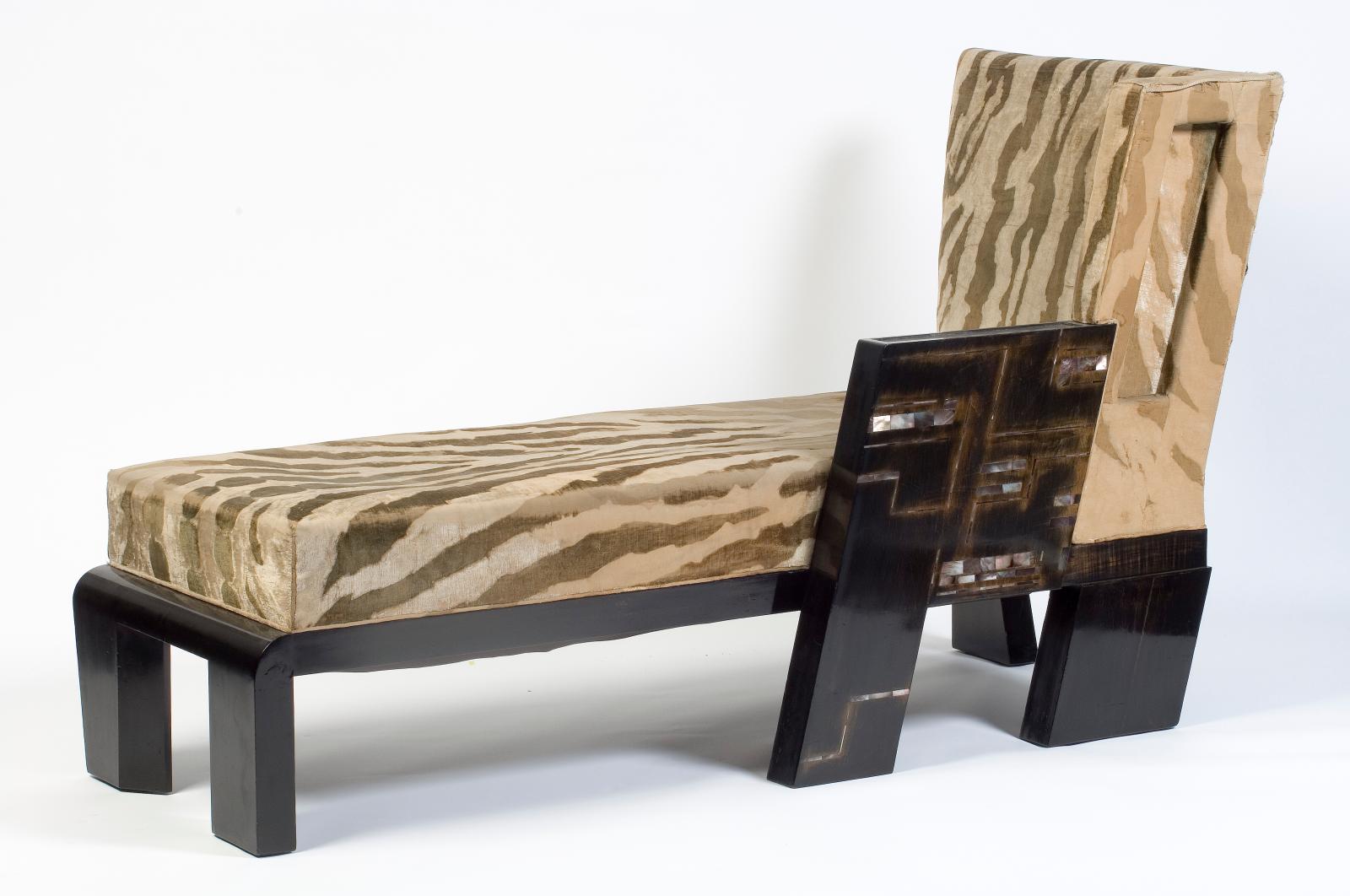 What a pleasure it is to leaf through the beautiful volume on Pierre Legrain recently published by Norma! The illustrations form a brilliant sequence of short visual paths showing the interiors of famous collectors. This book revives the great moments of Legrain's discovery, including François Mathey's "Les années 25" at the Musée des Arts Décoratifs in 1966. The leading market players of the time emerged: Félix Marcilhac, who exchanged a beautiful "African-style" ensemble with Andy Wharol for a portrait of the artist, or Bob Walker, whose finds made their way to Robin Symes' house in Manhattan.

A Folly of Forms
In 1917, Jacques Doucet invited Legrain to design some bindings for his library. "Be freely inspired by contemporary artists' vibrantly coloured mosaics, bold play with geometric forms and straight-lined bands," was his advice. So Legrain developed an abstract ornamental language of interlaced circles and squares and sinuous or broken lines, composing graphic "frontispieces" for the book covers. He used an astonishing variety of materials, including morocco, parchment, galuchat, metal, exotic woods, mother-of-pearl, eggshell, enamels and hardstones. This formal play with materials was echoed in the frames he created for Doucet's painting collection.

With dislocated, out-of-kilter effects and inversions of perspective, the frames played with the composition of works. For example, the window in Matisse's Poissons rouges had shutters. Marcel Duchamp and Francis Picabia encouraged these ironic formal comments. Picabia's La Décaveuse was pierced with aggressively pointed nails, while Cure-dents is embellished with mother-of-pearl buttons. Did Picabia influence Pierre Legrain with his Dada spirit?
In line with Doucet's wishes, Legrain's play of forms and precious materials is also present in his furniture. In Doucet's home, the simplicity of a pedestal table was belied by the areas of silvered lacquer and eggshell on the base, creating the impression of a huge piece of jewellery. The irregular tortoisehell and mother-of-pearl inlays on a chaise longue accentuated the illegibility of its angled construction with oblique lines – a camouflage further emphasised by the zebra patterned silk upholstery. The apparent geometric simplicity of Jeanne Tachard's sofa and Maurice Martin du Gard's desk was undermined by unexpected asymmetries.

Watchwords and classifications were not at all to Legrain's taste, and he refused to be regimented. For him, the simple "everyday language" and "Cubism" advocated by the critics he derided were unable to encapsulate the playful geometry that was all his own. He also mocked the Africanism as some wanted to label him with. Ngombe chairs may have inspired his own of chairs 1923, but his intense dynamic energy blithely transcended them. Meanwhile, he crossed his African stools brazenly with curule chairs and even ordinary objects like bricks, imitated in wood. He also parodied the machinism then in vogue with the heavy, ungainly forms of the Tachard chair, an ironic version of Breuer's beloved Campaign Chair.
Relegating functionalism to its niche, he argued in favour of the "objet d’art", whose chief characteristic seems to be the most apparent formal uselessness. Legrain continued his formal play, this harmony, in interior design where he was given carte blanche, as with Jeanne Tachard's, home where "all the furniture was designed in view of the predetermined location of the pieces, with each contributing to the atmosphere." He worked as an artist, not as an "upholsterer", whose "decorative anecdotes" he detested. As he said in the June 1925 issue of Vogue: "Only constructed things can exist. Only volumes endure. […]. The eye must retain nothing […]. The goal is achieved when no particular detail stands out." Jacques Doucet's studio posed a considerable challenge in terms of invisibility. How was it possible to harmoniously integrate Picasso's Les Demoiselles d’Avignon, Le Douanier Rousseau's La Charmeuse de serpents du, Matisse's Bocal de poissons rouge, a collection of Asian art, sculptures by Lipchitz, Zadkine and Modigliani, a few African objects and his modern furniture? Doucet and Legrain opted for a mosaic of forms and colours. Echoing to rich materials of the furniture, walls and floors, the frames both isolated the works and made them part of the space.

"In your home, the fragments are in tune, the pieces come together. The objects cease to be disparate, and the whole thing hangs together […] but your Byzantine style is neither immobile, nor a fantasy made of borrowed things, nor the work of an archaeologist. It is full of action and movement," as André Suarez wrote to him. It is a chameleon-like strategy that muffles the dialogue between the masterpieces and their surroundings. The book ends with a totally new chapter on Legrain's activity in the US, with César de Hauke of the Seligmann gallery acting as middleman. Laurence Salmon is clearly fascinated by the artist, whom she has been closely studying for nearly thirty years, as witness her trenchant analyses of his work. Does she see Legrain as a "pre-Post-Modernist"?