Père Lachaise Cemetery welcomes 3.5 million visitors each year to wander the graves of past and present celebrities. Few are aware of the revolution the cemetery provoked in funerary practice and commemorative art, innovations explored in this two-part article. 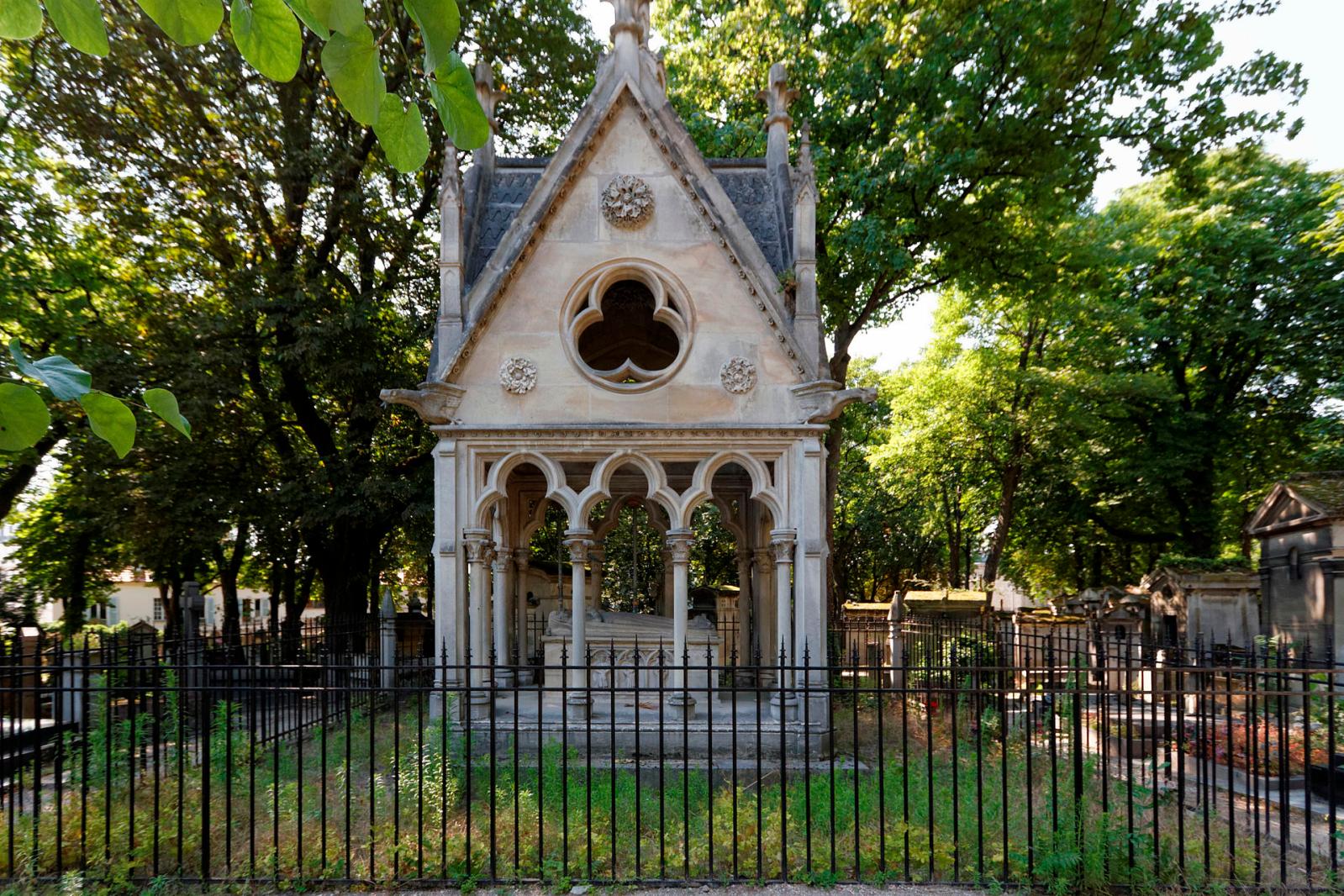 Père Lachaise is the world-famous resting place of countless luminaries of the arts, politics, and science. Few realize that the cemetery is of equal importance for the manner in which those figures were memorialized. At its creation in 1804, Père Lachaise radically altered Parisians’ relationships to the deceased. Most significantly, the cemetery offered the middle class its first opportunity to acquire permanent plots and to mark the graves of their families. Those commemorative practices would eventually render Père Lachaise an informal national necropolis, with monuments raised to mark the heights of human achievement and the depths of collective tragedy. Sited on the former country retreat of Louis XIV’s confessor “Father Lachaise,” the cemetery’s bucolic landscape was also the world’s first “garden cemetery.” Its park-like setting and elaborate funerary architecture would define cemetery design across Europe and the Americas to the present day.

Prior to the creation of Père Lachaise, a permanent burial place—generally within a Catholic church— was a privilege reserved for only the most elite Parisians. The rest of the population was consigned to the open pit, a rude patch of earth beside the church, and only for the time a cadaver required to decompose. Their bones were then collected and placed in anonymous ossuaries (a charnel house), like those still extant at Saint-Séverin in the Latin Quarter. In keeping with their rational interrogation of tradition, Enlightenment thinkers condemned urban cemeteries as a health danger and as lacking human dignity. Various inquiries and decrees attempted to address the situation across the eighteenth century, and starting in 1780 churchyard charnel houses were progressively emptied into the Paris Catacombs. The Revolution only exacerbated the problem with a sudden need to bury thousands of executed citizens, but it was Napoleon who finally provided the means to end urban burial.

The Monumental Vurial Plot
Among his first social reforms, Napoleon ordered the purchase of three tracts of land far beyond the city boundaries to receive its future dead, one of which was the estate of Père Lachaise. These new cemeteries wrested control of interment from the Catholic Church to offer every citizen the right to a dignified burial regardless of class or creed. As a secular graveyard administered by the municipality, Père Lachaise included a division for Jewish burials and was the eventual site of the first Muslim religious structure built in modern continental France. Although the practice of temporary inhumation continued at Père Lachaise until 1874, each body was deposited in an individual rather than collective grave, until it was moved to the ossuary. Those individuals willing to make a donation to a hospital or orphanage could acquire a permanent concession for themselves and their loved ones. Thus was born the family plot, and the desire to mark one’s permanent resting place with a tasteful marker.

The first tombstones were simple slabs, either fixed vertically or laid flat to cap a shallow masonry tomb. These were followed by Roman-style cenotaphs or broken columns, a nod to the Neoclassical style preferred by Napoleon and his court. Today the Chemin Denon, where composer Frederic Chopin is buried, offers a concentration of these early markers and best approximates the appearance of the graveyard circa 1820. A visitor might easily overlook the 1815 tomb of cloth-merchant Pierre Gareau on the terrace below Chopin’s grave. Nevertheless, the life-size female mourner installed by his family inspired an entirely new approach to funerary architecture by introducing sculpture. Gareau’s tomb asserted a post-revolutionary mercantile class’ desire for luxuries previously reserved for the aristocracy. That self-aggrandizement through art raised eyebrows for its troubling of social hierarchies, the first of many polemics provoked by the monuments of Père Lachaise.

The “Garden Cemetery”
Little is more difficult to transform in human culture than our treatment of the dead and Père Lachaise proved to be a particularly challenging innovation. Parisians initially balked at the cemetery’s distant location in a working-class neighborhood. As a consequence, Père Lachaise averaged less than two hundred burials per year over its first decade. In an attempt to increase the number of permanent concessions, Napoleon announced that he himself would be buried on the highest point of the cemetery, surrounded by the tombs of his generals. When that enticement failed, the city organized a series of celebrity re-interments. The purported remains of Molière and Lafontaine were moved to the cemetery in 1817. That was followed by a major publicity coup designed to resonate with the Romantic sensibility of the period. Violently separated in life, the star-crossed medieval lovers Héloïse and Abélard were reunited in death just beside the then-walled Jewish sector. They rest beneath a replica of the Neo-Gothic baldachin that Alexandre Lenoir (1761-1839) assembled for his Musée des Monuments Français from architectural fragments rescued during the anti-clerical vandalism of the Revolution.

Nestled in a verdant landscape, these celebrity graves exemplified the vision of the “garden cemetery.” In designing Père Lachaise, architect Alexandre Brongniart preserved the groves and winding paths of the original estate. The visitor’s immersion within nature was meant to inspire a suitably meditative state in which to contemplate imposing monuments to the moral examples of great citizens. The concept was rooted in the eighteenth-century jardin philosophique, which broke with the ordered geometries of formal French gardens. The organic plan of a “philosophical garden” staged a process of gradual discovery that was facilitated by one’s movement through a landscape dotted with picturesque follies. Certain jardin, like Rousseau’s island tomb at Ermenonville, had been funereal in nature, while others, like the Desert de Retz or the Parc Monceau, emphasized exotic marvels and artificial ruins. While the original idyllic landscape of Père Lachaise has long been eclipsed by nearly two million burials, it lives on in other significant nineteenth-century cemeteries such as Highgate (London), Mount Auburn (Boston), and Greenwood (Brooklyn).

The Birth of the Artistic Tomb
The birth of the “artistic tomb” was also key to the aesthetic of Père Lachaise, and the impetus to its becoming a site of national memory. An “artistic tomb” exceeded mere commemoration to aesthetically embody the spirit or legacy of the deceased. The first was the monument raised in 1813 after the state funeral for poet Jacques Delille. His sepulcher was set in a grove within the former vegetable garden of the estate, a fitting setting for an author and translator of georgic poetry. Delille’s tomb was quickly joined by those of other figures of the letters and the arts, establishing burial at Père Lachaise as a means of honoring contemporary intellectuals and artists. Perhaps the most elaborate example of an “artistic tomb” was raised by the fans of Alfred de Musset at his death in 1857. The monument bears a portrait bust of the poet and is inscribed with two of his texts. One imagines his own future tomb set in the shadow of a mournful willow tree, and the other promises that his passion for a beloved will transcend his death like the devotion of a cherished sister. The tomb literalizes these poems, with a willow tree planted behind the stela just beside the grave of de Musset’s sister, whose life-size likeness features a volume, presumably of her brother’s verse, laid upon her lap.

The common practice of erecting a tomb by public subscription to honor a celebrity’s achievement quickly rendered Père Lachaise a Who’s Who of eminent Parisians. From the 1830s forward, members of every social class bought plots to rest beside the illustrious dead. The combination of the permanent concession and increasingly exuberant funerary architecture marked interment at Père Lachaise as a sign of social status. It also rendered the cemetery a site of bitter ideological conflict. French society would be rocked by political turbulence over the entire nineteenth century, and the expressive impulse implicit to grave marking introduced those tensions to the aesthetics of funerary design as well as to day-to-day management of the graveyard. As a site of collective commemoration, Père Lachaise mediated the competing impulses of revolution and tradition that defined a modernizing nation. That history will be considered in Part II of this article.

In Zadkine's Studio
Not to be missed
Cultural Heritage