This collection of antique books from the library of the Ducs de Montmorency is largely given over to manuscripts, remarkable bookbinding skills and the French coat of arms. 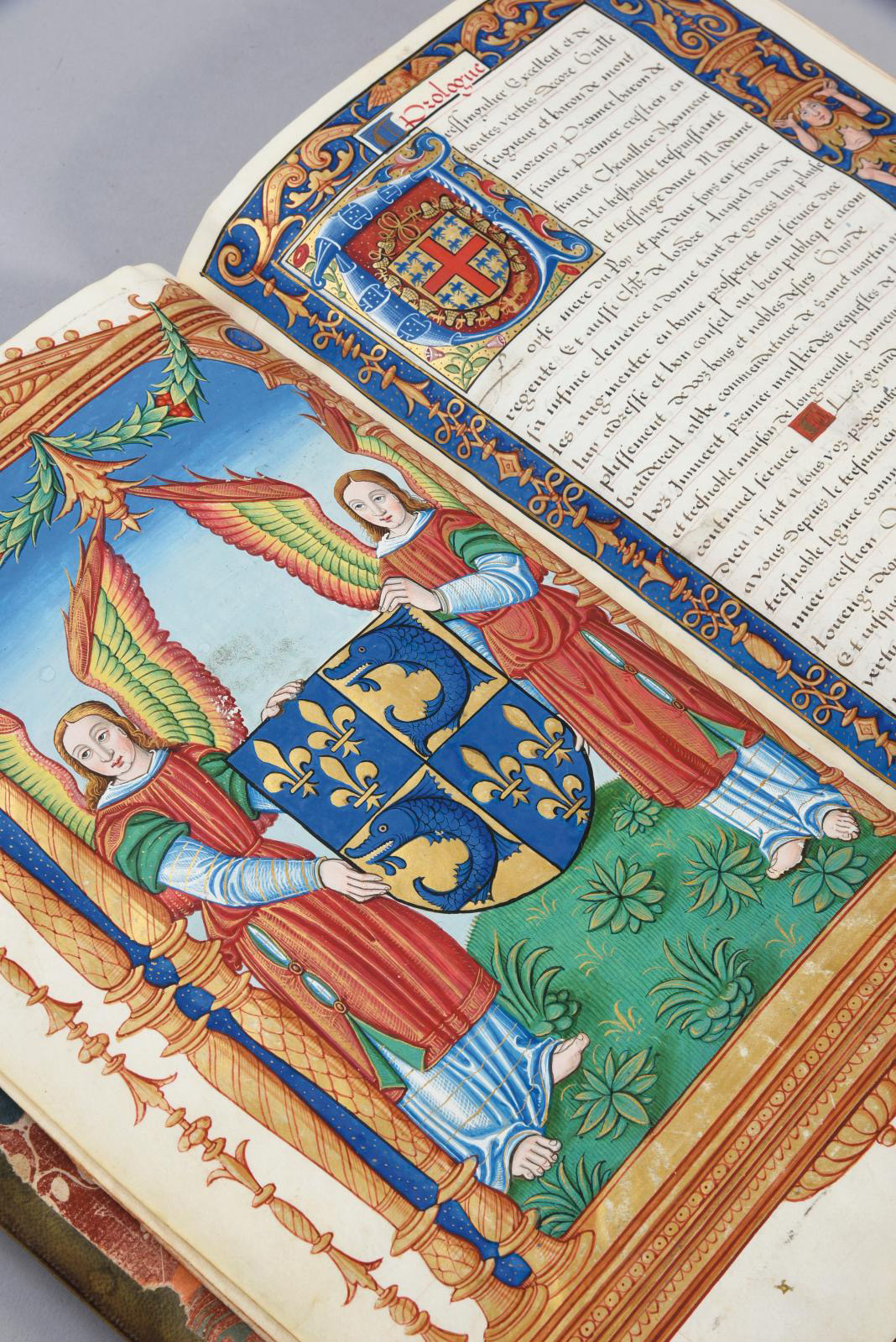 Assembled through an erudite family’s love of antique books, this library contains various treasures that have come from the collections of the Ducs de Montmorency and, through marriages and descendants, the Baron de Breteuil. The quality of the bindings rivals the beauty of the illustrations in the manuscripts; the rarity of the texts and the splendor of the arms that appear on them. There are only 74 lots, ranging from the 16th to the 18th centuries, but each one is a gem taking us through the history of France, where we cross paths with some of the figures who helped write it. Plenty to stir up the world of bibliophiles and public institutions, that’s for sure!

First of all, a tribute to some great ladies: those who remained in the shadows and were restored to their rightful place in the ostensibly male world of bibliophily by the literary critic Albert Cim, in Les Femmes et les livres (Women and Books; 1919). One of the first-rate women collectors he includes is the unobtrusive Armande du Plessis (1686-1744), prioress for life, of the order of Benedictine nuns known as the Présentation de Notre-Dame—and also the daughter of the Duc de Richelieu, the cardinal’s great-nephew and direct heir. The book bearing her coat of arms is a unique copy estimated at €10,000 to €12,000. It is a manuscript finely illuminated by the calligrapher Jean-Pierre Rousselet (with six large culs‑de-lampe depicting beautifully simple bouquets) detailing the ceremonial of the sisters of the Présentation from the day they joined the order to the day they died. Its full morocco binding is decorated with a rich lacework of crowns, cornucopias and suns. The nun rubbed shoulders with two royal mistresses on these scholarly shelves, notably Madame de Montespan (1640-1707), whose mind was set on salvation. Her coat of arms appears on a copy of the theological collection by Jean Desmarets de Saint-Sorlin (1595-1676) called Ouvrages de piété (Works of Piety: €1,500/2,000). As chance would have it, the poet and playwright was a protégé of Cardinal Richelieu before becoming a staunch believer who claimed to write at God’s dictation. The book has the Château d’Oiron library’s characteristic binding and is mentioned in the inventory drawn up in 1707 at the time of his death at the request of his legitimate son, the Marquis d’Antin. However, only 79 copies are listed, and this is one of them. The first 24 volumes of the review Le Mercure de France, which belonged to the Marquise de Pompadour and subsequently Président Crozat and the Baron de Breteuil (€6,000/8,000), are also for sale. Another gem is this remarkable copy in mosaic white calf with the arms in watercolor of a princesse de Bourbon-Parme, probably Caroline (1770‑1804), great-granddaughter of Louis XV. It is a title attributed to Jean-François de Lambert, Les Saisons... (€8,000/10,000). According to sale expert Mr. Del Moral, “The leather used, the motif represented and the pink tabis endpapers are also found in three bindings now in the Bibliothèque Nationale de France, and, more precisely one that is signed and features the initials of Marie-Josèphe de Saxe.” This means the binding can be attributed to the workshop of Louis-François Lemonnier, a member of a Parisian dynasty established in the early 17th century, who was admitted as master in 1737 and was famous for his very fine mosaic bindings.

Want to receive news and updates about auctions?
Sign up for our newsletter
The Royal Sun
After the ladies, we move on to dauphins, kings and cardinals. A touching tribute is paid to one of those young princes who died too young, Louis de France, Duc de Bourgogne (1751-1761), with a copy of a manual intended for his education as the future king. A 1758 Paris edition of Exposition d’une méthode raisonnée pour apprendre la langue latine is bound with his arms (€3,000/3,500). This “Latin primer” did not serve the young boy long, as he died on Easter night in 1761. His younger brother, the Duc de Berry, finally reigned as Louis XVI.

One of the most eagerly awaited books, certain to be hotly contested, is the Felsina Pittrice Vite de Pittori Bolognesi (Lives of the Bolognese Painters) by Carlo Cesare Malvasia (1616-1693), with an estimate of €15,000/20,000. Printed in Bologna in 1678, it is bound in red “sunburst” morocco: a remarkable decoration in itself, but the book also has a dedication to Louis XIV contained in both volumes. It is in Latin and means: “He joins and enhances these two suns and still governs them. Thus, he adorns his hair with a diadem. Thus he doubles the brightness of the day.” The binding could not be more in keeping with the text it encloses, as the Italian art historian dedicated his work to Louis XIV, who in return presented him with his own diamond-studded portrait.

After the king, comes the man who contributed to his education, Cardinal Mazarin, with a copy of the curious collection of Lettres panegyriques aux héros de la France par le sieur de Rangouze (Panegyric Letters to the Heroes of France by the Sieur de Rangouze: €4,000/6,000). Published in Paris in 1648, the collection of missives written by Pierre de Rangouze to leading figures of the kingdom seeking to obtain favors and money is bound in full morocco in “Duseuil” style and bears the coat of arms of Mazarin: an azure-colored shield featuring fasces in pale gold bound in silver, and a red band bearing three gold stars. It has a specific feature making it possible to date the period when the binding was made, i.e. the early 1650s: the arms are not shown under a cardinal’s but under a prince-bishop’s hat. Mazarin did not become prince-archbishop of Metz until 1652.


Libris et liberis
The next manuscript offers plentiful material for investigation. Although Erasmus’ Institutio Principis Christiani is famous, what lay behind its translation from Latin into French is less well-known. It turns out that the mission was initiated and carried out by Guy de Baudreuil (after 1449 - after 1531), abbot of the flourishing abbey of Saint-Martin-au-Bois. He commissioned a handwritten illuminated copy from the monks of his scriptorium and took the liberty of submitting it to Guillaume de Montmorency with the clear intention—indicated in the prologue—that the latter should pass it on to Louise de Savoie (1476-1531), mother of François I. The baron was part of the regent’s bodyguard and was the king’s Knight of Honor. This was a bold and clever ploy, as Louise de Savoie was one of those Renaissance women who attached great importance to education: her motto was Libris et liberis (“For books and for children”). Baudreuil had the arms of the Montmorency family depicted and, sure of his move, audaciously placed the arms of the Dauphin of France, François, Duc de Bretagne (1518-1536), in the frontispiece of the manuscript. Other information is given in the prologue, and the expert says that he thoroughly enjoyed “following the clues leading to the date this exquisite document was produced.” In it, Louise is described as “mother of the king and twice regent in France”, for she held this position on two occasions: firstly in 1515 during the famous Battle of Marignano, and secondly from August 12, 1524, to March 21, 1526. This means that the manuscript was certainly illuminated between 1526 and 1531 (the year of her death) by the circle of Étienne Colaud. It illustrates the master illuminator’s liking for bold colors like azure, green, red and gold, which is also evident from the details of the angels’ clothing. So this book may very well be a first edition: the first translation into French of one of the most famous treatises on education of the time. €40,000/50,000 is the estimate for this manuscript, rare in many respects and a real milestone in the history of bibliophily. The result could be even higher. All will be revealed at the auction on October 14 at Drouot!

The Kahn Library: Honouring Surrealism
Not to be missed
Pre-sale