Walking around Paris it is difficult to miss the dramatic chocolate sculptures showcased in the shop windows of Patrick Roger. These monumental works, which transcend edible creations, have earned him the nickname the “Rodin” of chocolate. An accomplished artist, Roger’s practice extends beyond chocolate. 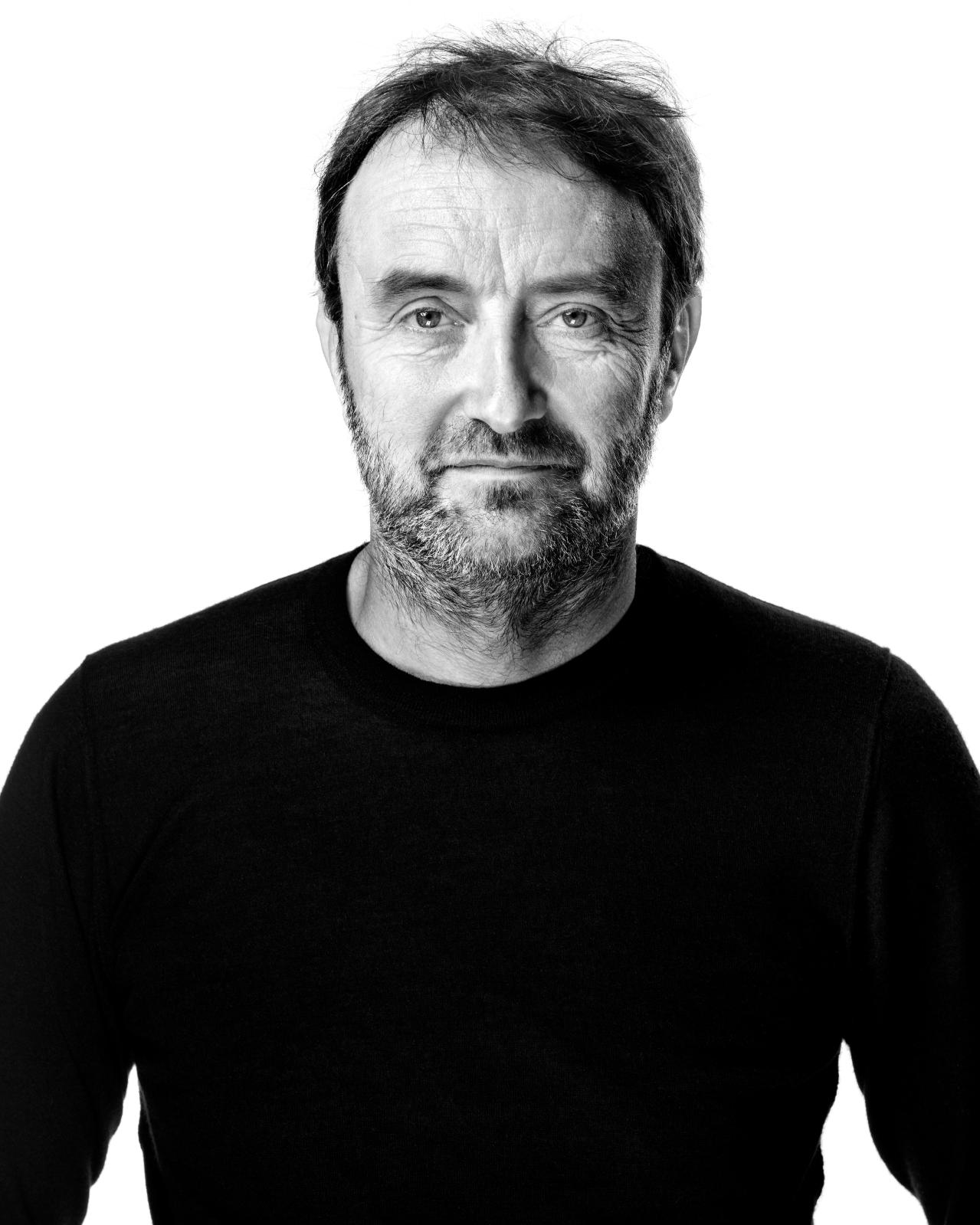 A master chocolatier and artist, Patrick Roger is perhaps most famous for these remarkable chocolate sculptures exhibited in his gallery-like stores and for his innovative, sophisticated approach to edible chocolates. Highly decorated, Roger has received numerous accolades for this work, including the Meilleur Ouvrier de France (MOF) in 2000, an honor only bestowed upon the country’s best craftsmen, and the illustrious distinction of the chevalier de la Légion d’honneur (Knight of the Legion of Honor) in 2018, among others. It was Harold, a human-sized sculpted manifestation of a crouching cacao farmer in chocolate that garnered him the prestigious MOF. Yet Roger’s artistic practice reaches beyond ephemeral sculptures to include an unexpected and expanding corpus of sculptures in durable materials, like bronze, aluminum and silver. Rooted in the materiality of chocolate these artworks fit naturally in his corpus. After all, it was chocolate’s malleability that captured Roger’s attention when he was a young apprentice with a pastry chef and chocolatier. And chocolate remains the primary material from which the sculptures are conceived and ultimately cast. While certain artworks evoke those of Giacometti, Picasso, Brancusi and of course Rodin, Roger is an autodidact, who developed an intuitive sculptural approach having little exposure to the world of art prior to his foray into the world of art. Subsequently, he has paid homage to these masters in works like the bronze sculpture Balzac, of 2015, a distinct nod to Rodin. Yet Roger’s oeuvre reflects a unique artistic vision, imprinted with his profound knowledge and appreciation of this ancient treat, first concocted by the ancient Mesoamericans.

The Studio
Nestled in the leafy Parisian suburb of Sceaux, which boasts its own château and gardens, is a rather unassuming white brick industrial building. Behind this façade is Roger’s workshop, buzzing with activity. Entering the building is a structured experience. The entryway is a darkened space lit with pockets of light, one of which illuminates a sport motorcycle. This sculpted Italian machine, built with precision and for speed, is emblematic of Roger. Two monumental swinging carbon fiber doors, a nod to the art of the motorcycle, mark the threshold between this space and the workshop. Behind these doors is the vast, light-filled space of the studio, where the potent smell of chocolate activates the senses. The layout, featuring a large central area flanked by two side ‘aisles’, is cathedral-like in its arrangement. Conventional walls are replaced, in part, by vast expanses of glass. These three distinct spaces are not only immaculate but meticulously organized, the antithesis of a stereotypical messy artist studio. Chocolate production takes place within the side aisle to the right, which is complete with traditional tools of the trade. The vast, pristine double-height central space is the place of creation. This is where ideas spring to life and sculptures take form. The aisle to the far left is a gallery-like space, housing a group of sculptures. Beyond the gallery, outside, stands an art sanctuary complete with a sculptural cemetery, an idea that sprang from a discussion between a father and his daughter, in which a comparison between Roger's teeth and alignment of megalithic menhirs, like those found in Carnac, Brittany, was evoked. In this garden menhirs are replaced by bronze sculptures situated in an arc, echoing the anatomy of Roger’s mouth. Here, sixteen sculptures represent a row of teeth of the upper jaw. Alongside the art-filled garden is a vegetable garden, where groves are set to bloom and carrots are expected soon. This physical and visual proximity to the natural world underscores the central role nature plays in Roger's work.

Back inside, grouped in the center of the workshop are industrial stainless steel worktables topped with dark granite, bringing to mind the design of his eponymous stores. It is here that two symbiotic worlds meet. Sitting on some tables are trays with edible artistic chocolates destined for the commercial enterprise and on the others are artworks of different sizes, forms and materials, not only chocolate, but bronze, aluminum, silver and gold. Roger, a fit man dressed in a spotless chef’s jacket with the distinct MOF collar, glides into the workshop. After introductions, he quickly scans the room and walks over to speak with a member of his staff. His relaxed demeanor belies his exacting, meticulous character. Roger is a stickler for precision. We walk among an array of oeuvres ranging from precious miniature sculptures in gold and silver, a collection of human feet some of which are cast in plaster and others in chocolate, two tall vases made from chocolate that appear to have been fixed using Kintsugi “golden joinery” (the Japanese art repairing broken pottery using gold) and a collection of abstract geometric sculptures that celebrate materiality, through both surface treatment and form. The artist’s hand is perceptible on the undulating surfaces of these sculptures that are at times polished, rough, crinkled, warped and seemingly raw. Roger explains that he is moving away from the figurative work, adopting a more abstract artistic language. This cross-section of works, while divergent in size, material and form, clearly expresses a coherent vision, which finds its roots in the complexity of chocolate. Roger is prolific; the production of such diversity necessitates the finesse, precision and speed of his beloved high-powered motorcycles.

A large biomorphic aluminum sculpture, featuring a cacao seed-like form, framed by protective twig-like elements that project into space, hangs on the back wall. The surface treatment is varied and complex - rough, smooth and modeled. While abstract, the sculpture is both a celebration of nature and a homage to Roger’s constituent material. Below, assistants are busy using rasps and files to smooth part of the chocolate surface of a massive solid box-like structure that stands approximately three feet tall and more than ten feet wide. Centrally placed on the top of this brown box is a large hole from which thick dark tubes of different thicknesses appear to emanate and articulate the surface. The smooth dark brown tubes could easily be mistaken for the roots of a missing tree. With a smile, Roger teasingly asks “What do you think it is?” Clearly, a root system for a tree is not the correct answer. This is where Roger steps in to tease out the concept behind this monumental sculpture. Entitled Milieu extérieur (External Environment), this box, with its distinct hole and articulated surface, expresses a liminal space, a space of transition and movement between interior and exterior. Roger rather cryptically says "There is only a cell barrier between the external and internal environment." Milieu extérieur is a multilayered environmental work, in both its scale and underlying message. Nature is again the focus. Here process also must be considered. Modeling the surface of works like Milieu extérieur generates chocolate filings and chocolate dust that are in turn collected, melted and reused that, rather poetically, underscores a natural, virtuous cycle underlying the sculpture’s meaning. Currently, at the foundry, this monumental work is in the process of being cast. Moving at the speed of a high-powered motorcycle Roger is currently at work on three large works entitled Sumo, The Apostles and Dendrologie (Dendrology). Sumo features an abstracted recreation of a dohyô, the fighting space of sumo wrestlers, within which about 12 wrestlers are situated. Having exhibited in Japan and with a new exhibition scheduled for October 2022 in Roppongi district of Tokyo, Sumo makes manifest Roger’s connection to the country. Forever pushing boundaries, Roger says that The Apostles will feature 13 rather than the traditional 12 apostles. Questions will have to wait until the work takes shape. Finally, Roger is revisiting and expanding an existing series called "Science du Vivant" (“Life Sciences”) through the creation of a new Dendrology sculpture. With Dendrology, the scientific study of trees, nature is again foregrounded, a rich subject central to the expanding Roger universe.

Worth reading
Sculpture, Volume II, featuring the Roger corpus since 2018, due out September 2022,

In Paris, the Mallorcan painter puts the finishing touches to his...