Parisian Artistic Life with a Touch of the Bosphorus

While Turkish collectors were the first to revive interest in artists from their country who came to Paris to spice up modern art, they are now facing more rivals. 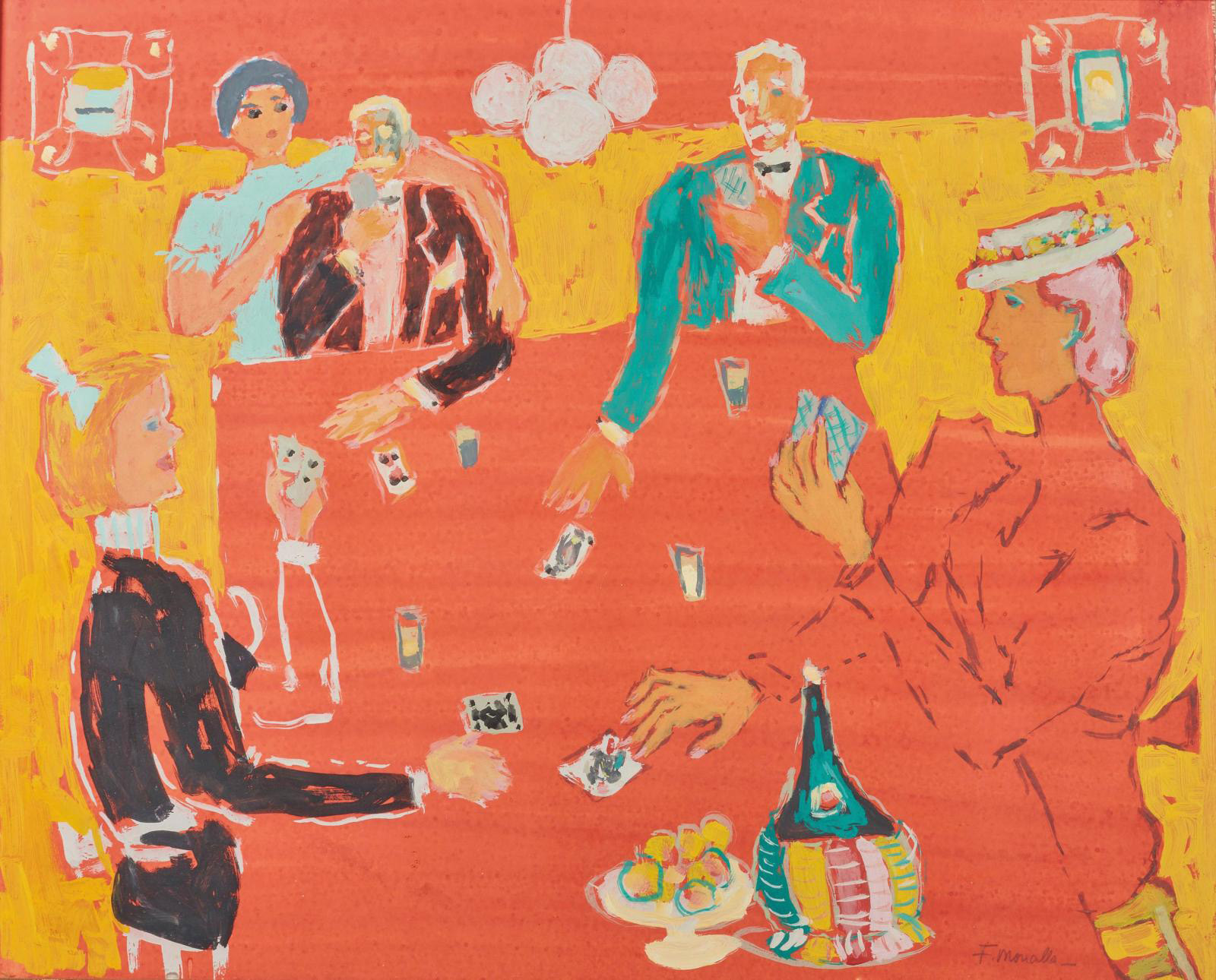 The School of Paris, in both its first and second forms, was a decided magnet for 20th-century cosmopolitanism, and a remedy for nationalism. Its exponents regularly turn up in the art market, and we keep discovering artists from other walks of life. This time, we focus on the generation contemporary with the birth of the new Turkish state, which arose in 1923 from the ruins of the Ottoman Empire. Many responded to the siren call of modernism, especially after the Second World War, gravitating around the founding figure of Fikret Moualla (1903-1967), who arrived at the very end of 1938.

Two recently published books, including the catalogue raisonné of Fikret Moualla's paintings by Marc Ottavi and Kerem Topuz, trace the careers of these artists, shedding light on their aesthetic quest, their desire for independence and their need to root themselves firmly in the century. An invitation to follow them through Paris's cobbled streets into the smoky silence of their studios.

The Eulogist of Streets and the Night
The sale of the Weil-Thenons' collection dispersion—1,380 lots all told—was a marathon that kept bidders breathless for three days (September 16, 18 and 21, 2020, Millon auction house). The couple owned no fewer than 20 works by Fikret Moualla. As true admirers of 20th-century art, whenever they liked painters they would buy literally dozens of their works. The highest bid, €35,100, went to a gouache entitled Femme et vase de fleurs (Woman and Vase of Flowers): a price in the high range of his works in the French market. Moualla encapsulated the qualities of the starving, alcoholic artist of Charles Aznavour's song La Bohème. He never painted on canvas, only hundreds, even thousands of gouaches on paper expressing—or positively shouting—his love of street scenes, anonymous people in everyday life, people of the circus and the night world. He often depicted celebrations, though he often lapsed into madness. As specialist Marc Ottavi tells us, "More than poverty, Moualla feared any form of authority, especially the court authorities, which sent him to a psychiatric asylum seven times." He was an oddball who drew on the blinding qualities of Expressionism to depict vibrant characters and never succumbed to the appeal of the abstraction dominating Paris at the time. It would not have suited an artist who used an intensely vigorous palette to produce real snapshots of society.

Avni, Nejad, Bitran and Others
Between 1939 and 1955, eleven artists in turn left their studios in the Bosphorus for those of Montparnasse. Like their colleagues from all over the world, they were drawn by their love of modernity. Most of them knew each other, having attended the classes of Frenchman Léopold-Lévy at the Fine Arts Academy in Istanbul. In the early days, all of them endured being equated with followers of Orientalism. The cliché persisted until they were finally recognized for their true worth, and critics acclaimed the vitality of this young scene, which was also aided by the efforts of avant-garde gallery owners.

Abstraction was the mode of expression of all these artists. We can also mention Selim Turan, Remzi Rasa, Mübin Ohon (an Expressionist influenced by his encounters with Poliakoff and Messagier), Hakki Anli, Albert Bitran and two women artists, Tiraje Dikmen and Fahrelnissa Zeid. On November 25, 2020, a group of works on paper by Zeid came up for sale with Thierry de Maigret. Kept in the same families since their acquisition, they sold for between a few hundred and 20,000 euros. The wife of an Iraqi prince, Fahrelnissa Zeid embodied 20th-century cosmopolitanism. She stood out for her highly personal visual language, like a new calligraphy interlocking mosaic forms in strong colors, which she developed in the Fifties.

At the end of the 1960s, Paris relinquished its role as a shining light of modernity to New York. Exhibitions of Turkish artists became rarer. Their paths separated, with some returning to their homeland, and others remaining, or choosing other countries: Poland for Nejad Devrim, Jordan for Fahrelnissa Zeid. It was in Turkey, in the last decade of the 20th century, that their importance was finally recognized, thanks to collectors, galleries and private museums. Today, interest stems from all over the world, and the publication of these two new books should open up new prospects for them.

11
Nine men and two women: the number of Turkish artists who came from 1939 to interact with French modernity.
Five questions for Marc Ottavi, co-author of the catalogue raisonné of Fikret Moualla's work


You are an expert in the French market. Why does Fikret Moualla fascinate you?
In 1990, French auctioneer Guy Loudmer tried to form a committee to determine what was authentically Moualla's work and eliminate the forgeries then rife. Mrs. Favre-Kleinmann, who had known the artist well, and Mr. Jaunatre participated, but their respective positions were resolutely irreconcilable. I learned a lot from these meetings, which increased my appreciation for his work. In 2000, it so happened that, with Mr. Chassaing at the gavel, I presented the Garrigou collection, containing nearly 100 gouaches by Moualla, at three studio sales in 1977-1978—most of them on paper, in excellent condition with still-fresh colors. In 2009, I participated in the publication by Kerem and Hifzi Topuz of a biography full of anecdotes and memories. Among other things, artist Youki Foujita gives a fascinating description of the artist and his work. It took ten years to gather the information and photographs and carry out other research for Volume I of the catalogue raisonné. That's a pretty reasonable time frame.

How would you describe Moualla's pictorial world?
Apart from a few unconvincing stabs at Cubism, Moualla's work was figurative. His themes were inspired by everyday life: markets, bars, still lifes, characters—a dozen subjects at most. He mainly produced drawings with color highlights at the beginning, then his work became more simplified and began to mix Expressionism and Tachism. He was a spontaneous, intuitive artist who reduced details to the essential, creating a visual shock through his refined synthetic vision.

His colors are truly striking. Was this what dictated his style?
From 1920 to 1926, Moualla studied at the Berlin Art School. Through his association with members of Der Blaue Reiter (The Blue Rider), he developed a palette of primary colors and a frontal approach to the subject, where perspective is almost absent. On a combination of simplified colors, he would use the tip of his brush to produce short, crosshatched strokes superimposed on each other, forming contours with a hazy form. He was a simple artist who skillfully mingled background, form, line and color in an unlikely but happy marriage.

He seemed to be endearing but unsociable: a quality that certainly hindered his official recognition.
Leading dealers were interested in Moualla—Marcel Bernheim, Dina Vierny, Renou and Poyet—but his complicated personality and erratic behavior shipwrecked every project. His inability to follow a commitment through obviously didn't help. (...) Once his limited circle of relations was exhausted, and having no commercial network, he was forced to sell his gouaches on café terraces, not in line with the Latin tradition but through necessity.

Things are quite different today: his price index is high and relatively stable. How did this come about? And is there now a readjustment between the Turkish and European markets?
After a significant drop, his prices have returned to the level of the 2000s. We still find small formats in the €2,000 range and fine drawings from €10,000 up. A few very successful large works have topped €30,000, but this doesn't often happen at present. Despite the weakness of the Turkish lira, hammer prices are very comparable between the two continents. Moualla's collectors are mainly from the Turkish diaspora. In Europe, all his subjects are popular, whereas in Turkey, demand for portraits and bar scenes is low, due to religious convictions.

A Lyrical Landscape by Zao Wou-Ki