Pablo Picasso and François Hugo, the Work of a Goldsmith

Far from being posthumous inventions, precious metal pieces were designed by Picasso with the help of a great modern goldsmith, François Hugo. Two series unveil this hidden side of the man from Málaga. 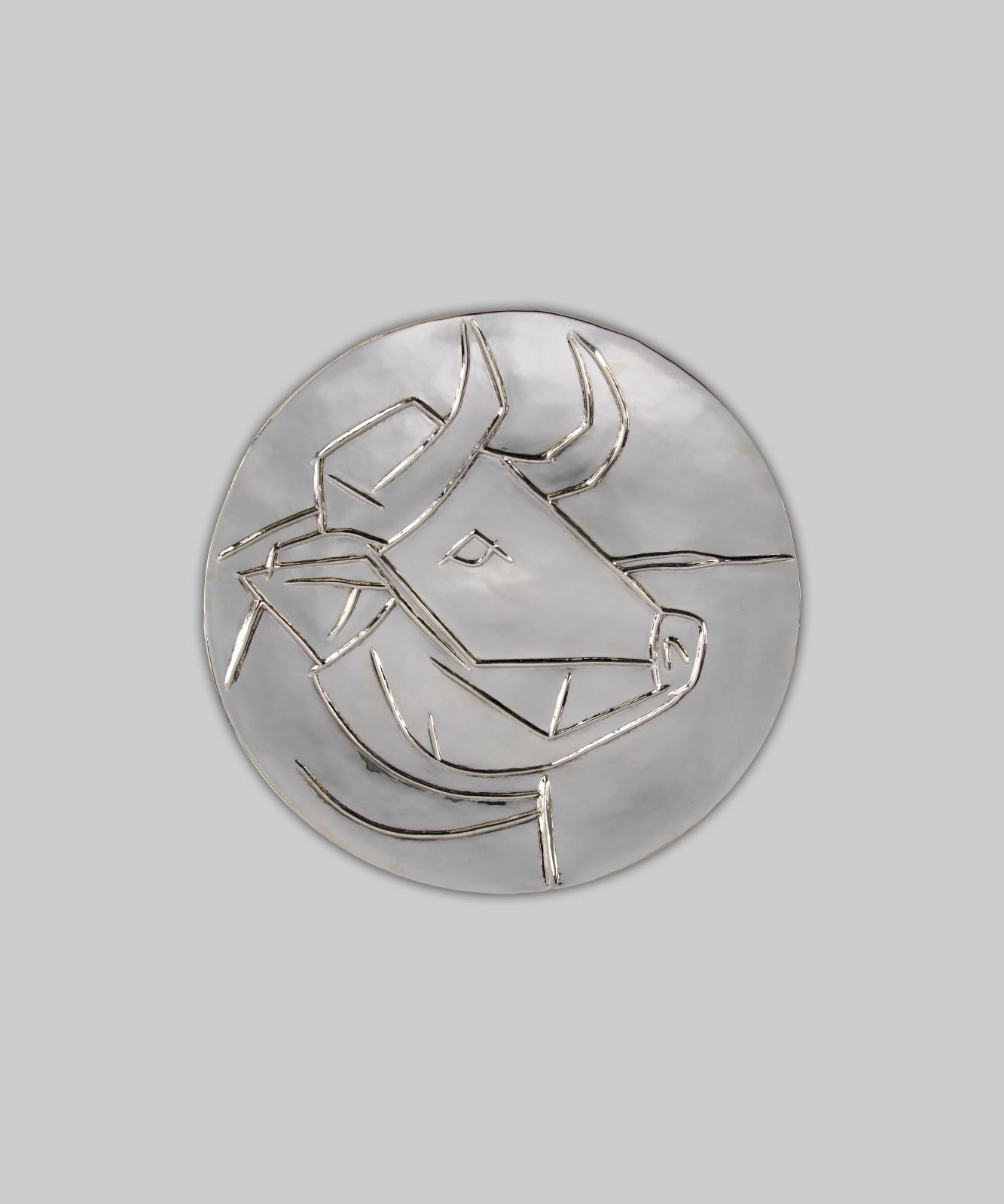 Painting, drawing, sculpture, but also engraving and ceramics… Pablo Picasso tried all media and mediums. Today, however, one side of his varied genius remains little known to the general public: artist’s jewelry, which he also tackled in the 1950s. Like his fruitful collaboration with the Ramié, in Vallauris, it was the result of a joint effort with a virtuoso in the field: François Hugo, great-grandson of the illustrious writer. The adventure began in May 1956 at Villa La Californie, Picasso’s studio in Cannes, during a visit by his friend, the art historian and collector Douglas Cooper… Twenty years later, in the preface to the catalog of the exhibition “Picasso: 19 plats en argent” (“Picasso: 19 Silver Plates”) held at Galerie Matignon in December 1977, the Briton evoked the first moments of this project, as they admired ceramics fresh out of the ovens of Madoura: “These objects gradually directed our thoughts and our conversation towards these opulent repoussé gold and silver platters made in the 16th and 17th centuries… Picasso told me bluntly that he had thought that his dishes would be splendid if they were made of silver, but that he did not know anyone who could handle this work.” Cooper then suggested François Hugo—one of the last great specialists of the repoussé technique. Picasso was all the more enthusiastic because he did not want to have his plates cast… Through his English friend, the meeting with Hugo took place the following September 25; a fruitful meeting, during which the artist gave “The Sleeper” plate to the goldsmith, as a model for a silver test piece. Two months later, in early December 1956, this first copy was completed and shown to its creator, delighted with the exceptional result.

Treasures Hidden Under the Sofa
But how does one render the subtlety of the Picasso touch? This was the real challenge… To accomplish this, François Hugo would follow a very precise process, which consisted first in working on a life-size biscuit matrix, made by Pablo Picasso and baked in the Vallauris ovens. Then, the goldsmith pounded a thin silver sheet until it completely filled all the hollow and modeled elements of the imprint, then the whole was chased. Needless to say, this traditional technique requires long hours and pounding the mallet hundreds of times. Besides this technical know-how, the genius of the goldsmith involved conveying in the metal, with the greatest fidelity, Picasso’s formal intentions, his very personal faces frequently tinged with humor. The result turned out to surpass Picasso’s expectations, who, for about ten years, would ask Hugo to make twenty-four plates, and each one in two or three copies… for his personal use only. For these precious pieces were not intended to be distributed, but created for the selfish pleasure of its author, as Douglas Cooper joked: “He hid them from view as if they represented for him some secret treasure. True, Picasso might on occasion fetch one or two from a dark corner or under the sofa… but he wasted no time before hiding them again.” For François Hugo, these dishes, which were made upon request by Picasso, deserved to be exhibited and circulated. Despite his insistent suggestions, he was regularly refused by Picasso, until the day in September 1967 when he finally agreed to authorize an edition of each of them, in a limited number of pieces that would bear the signature of both men. Twenty copies of each of the twenty-four dishes were then made, plus two artist, two author and six non-commercial copies. They include the master’s favorite themes a Bull, Fish, Jacqueline’s Profile, Flute Player and Riders.

Picasso, Sun Jeweler
These artifacts were sold to a small circle of collectors, as they were made; often, the goal of these wealthy aesthetes was to bring together a complete series, achieved patiently by the last owners of our set, from the South of France and now estimated at €700,000/1,000,000. But the fruitful collaboration between the two men did not stop there: passionate about this extraordinary project, Picasso decided in 1960 to have Hugo produce solid gold figurines. Last of all, they made medallions, whose limited edition was also launched in 1967, consisting of several series of twenty-four copies—since they reproduce the visuals of the silver plates exactly. These were also not cast but made using the repoussé-chasing technique. These extraordinary artist’s jewels also fascinated our southern collectors, who have managed to put together a complete set, also proposed in Cannes (estimate: €200,000/300,000)… It is extremely rare for such a series to be sold at auction; the last one, reuniting the twenty-four dishes, reappeared at Sotheby’s in London on October 13, 2021, at £1,467,000 (or €1,739,745). As for the gold medallions, a comprehensive collection of its twenty-four items (plus four others) was awarded HKD 4,900,000 (€589,553) by Sotheby’s Hong Kong on January 19, 2017…

François Hugo: Talent as a Legacy
The man skilled in the art came from a distinguished family: son of Georges Hugo and his second wife Charlotte Dorian, François (1899-1982) was, above all, the great-grandson of the superstar of French literature, Victor Hugo. With skills in many areas, the young man leaned toward artistic creation, and he tried his hand at carpentry, engraving and binding. But it was thanks to his sister-in-law Valentine Hugo, a painter and illustrator who was very much involved in avant-garde circles, that he met all the faces of the 1920s Paris scene. Among them were Jean Cocteau, Max Ernst and Pablo Picasso, but also fashion designers Coco Chanel and Elsa Schiaparelli, for whom he created buttons with surrealist accents. After the war, François Hugo continued to work for the top designers of haute couture, such as Christian Dior. Then came the reunion with Picasso when the silver plates were made, followed also by the even more complex fruit dishes in the same metal. After 1960, the artist’s jewel became one of his specialties: Max Ernst entrusted him with making his gold masks, Jean Arp, his cutout brooches and pendants, along with André Derain and Dorothea Tanning. This new type of jewelry remains the specialty of Ateliers Hugo in Aix-en-Provence, which was next run by Pierre, the son of François, who collaborated with Caesar, Rondinone and Arman among others, and is now run by Nicolas, his grandson.

From Agrigento to Rodin via Chiparus

The Parallel Universes of Di Maccio, Tatin and Caillaud
Newsfeed
See all news
Glasgow to Return Looted Antiquities to India
Record Set in Dutch Auction
World Record for French Artist Valentine Schlegel
Thai Artist and Activist Thanom Chapakdee Passes Away at 64
Not to be missed
Spotlight