The Outsider Art Fair has become a meeting place for European collectors and confirms the appeal of contemporary art for what has long been a niche sector. Drouot hosted a round table on the subject. 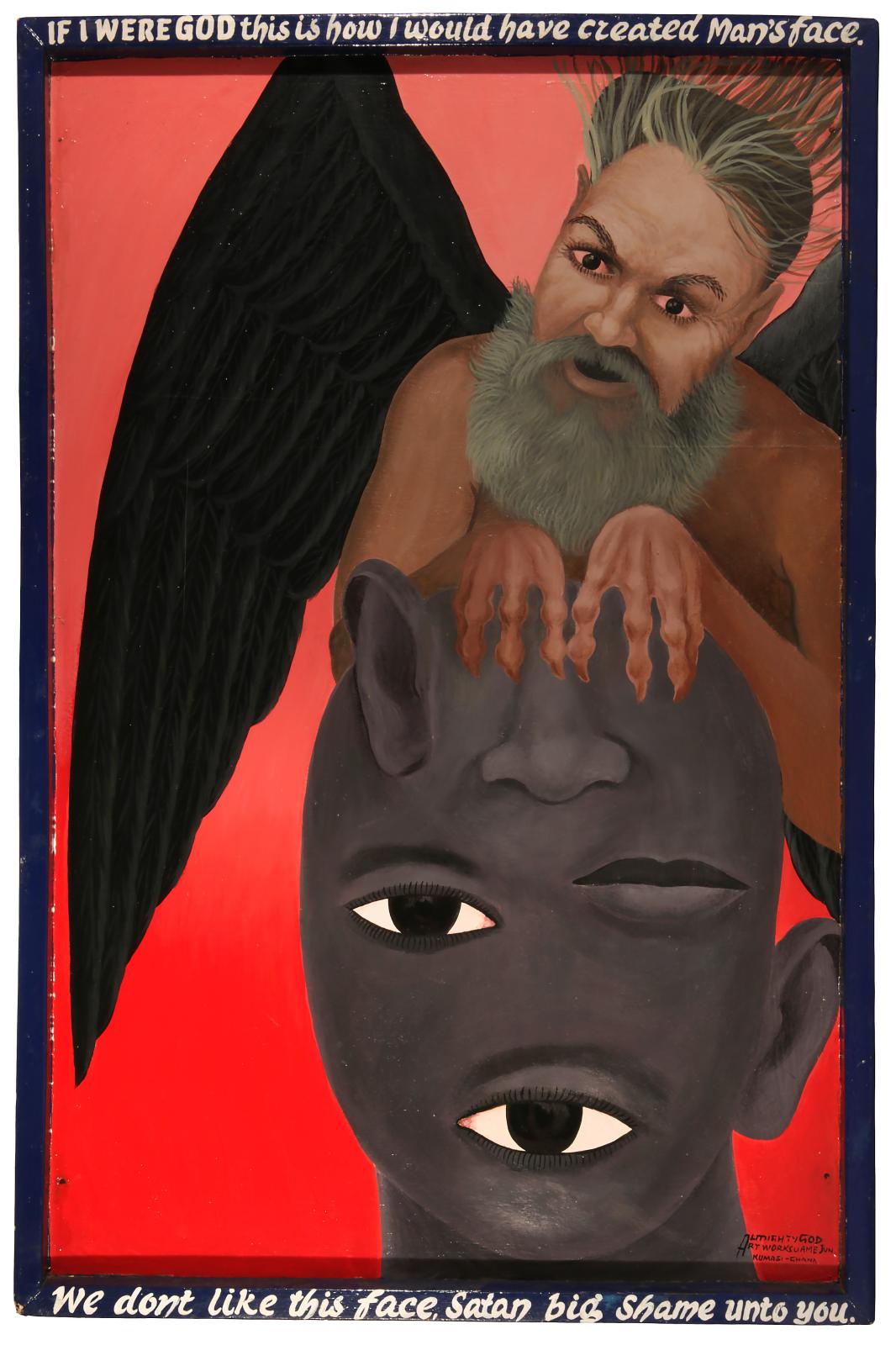 The choice of date—the FIAC fringe, when Paris gets in tune with the world of contemporary art—is not insignificant in the frenzy of major fairs around the world. The Outsider Art Fair has been in this niche since its creation in 2013 and is surfing on the media attention that art brut has received in the past 10 years, following the growing number of exhibitions in major institutions. Curators take their works and compare them with those of artists on the contemporary circuit without making any difference. The boundary between them is getting blurry. How they are seen is changing.

Floating Labels
Not all of the 40 or so galleries at the Outsider Art Fair (almost half of them French, five American, three Italian, one Indian) are exclusively dedicated to art brut: for example, newcomer James Barron Art (Kent), which incidentally sells works by Jean Arp, Anthony Caro, Mattia Bonetti or Jim Dine in the United States. Mohamed Ahmed Ibrahim is at Lawrie Shabibi (Dubai) after completing a residency at the Consortium art centre (Dijon) and founding the Khorfakkan Art Centre (Sharjah) in 1997. Abdelmalek Berhiss was represented by the 5 Contemporary gallery (Paris) until 2017, alongside Françoise Schein or Pedro Castro Ortega, and now exhibits with the new participant Siniya28 (Marrakech). The categories provide a framework and some people, such as Jean-Jacques Plaisance from the Yeux Fertiles gallery, question the importance of "creating limits to the definition of a new art brut artist. Which experts will decide? Which jury? In the United States it is linked to Folk Art. ‘Regulators’ will be needed to broaden Jean Dubuffet's classification." The works’ high visibility has consequences on "the art brut market, which has been growing steadily for the past 20 years, and even more briskly in the last three," says Philippe Eternod from the Galerie du marché (Lausanne). Take the case of an art brut "star" like Dan Miller, whose works are in MoMA's permanent collections in New York. "Prices have risen by more or less 60% over the past 10 years, and they will continue to rise, especially as this artist transcends labels," says Gaela Fernandez Florin of the Creative Growth Art Center (Oakland). A drawing costs approximately €7,000, but he’s recently started working on monumental formats. The large number of “transversal” shows featuring works of modern and contemporary art and art brut is beneficial. But everyone acknowledges that the prices are "light years away from contemporary art," as Arthur Borgnis puts it. "While some prices for museum-quality works by Adolf Wölfli, Henry Darger and William Edmondson have broken records [editor's note: $785,000 for Edmondson's Boxer in 2016], the art brut market remains relatively small." The price range is wide, from under €1,000 (which allows young people to start collecting) "up to over €250,000," says Becca Hoffman, the fair's director.

Discoveries and Specificities
The selection, starting with historical figures (Augustin Lesage with a 1938 oil on canvas at €45,000 or a 1919 painting by Charles Dellschau at €28,000 at Arthur Borgnis), is expanding to include many discoveries or "emerging" artists: Jerry Gretzinger or Tang Zipping at Arthur Brognis, Chris Corr-Barberis or Zina Hall at the Creative Growth Center of Art, Hervé Bohnert’s disturbing paintings at Jean-Pierre Ritsch-Fisch (Strasbourg), and Maurice, "who lived on the street, whom I discovered in late 2017," says Éric Gauthier from the Moineau écarlate gallery (Paris). Also worth seeing are "some drawings by Charles Schley, an orphan who was sectioned to the Sainte-Anne psychiatric hospital in Paris in 1929 and diagnosed with schizophrenia. Most of them are kept in the collection of the Museum of Art and History at the hospital and it seems to me that the ones I show have never been sold before." With her solo show by Ghanaian Kwame Akoto, Françoise Adamsbaum illustrates another way of promoting an artist. "I discovered Kwame Akoto 17 years ago thanks to Hervé di Rosa, who was travelling around the world, and we’ve been promoting him on the market for four or five years,” she says. “We started by bringing his works into museums; two of his works are in the exhibition Twenty Years of Collection Enrichment at the Musée du quai Branly – Jacques Chirac and the "Cabinets of Curiosities" of the Edouard and Hélène Leclerc collection in Landerneau. Now we’re presenting it to the general public. The works of this artist, who comes from the tradition of sign painting, are accessible between €1,000 and €12,000."
In this general light, the fair is opening up to more regional specificities, such as Morocco. "The world is looking for something original and true,” said Hadia Temli from Siniya28. “In Morocco, the market is still reluctant and collectors are more interested in artists from major art schools. But internationally, we’re pleased to see this movement take shape with more strength and confidence." Becca Hoffman is also very enthusiastic about the opening this year in Dubai with Lawrie Shabibi. Something else that’s new this year is the place given to women artists and collectors associated with art brut, who will be celebrated the night of Friday, 18 October, in an event entitled "Women Collecting Art Brut" (6-10 p.m.). The event will also feature a series of performances and a jury composed of leading figures from the world of culture will award a woman artist the Art Absolument for Outsider Art Prize (accompanied by a cash prize of €10,000). Finalist Latefa Noorzai, an immigrant from Afghanistan exhibiting at the Creative Growth Art Center (Oakland) booth, is worthy of attention.
The fair’s focus on Bruno Decharme's collection of photographs has encouraged gallery owners to present gems, as is the case of Cavin Morris (New York) with photographs by Miroslav Tichy. Les Douches la galerie offers "a selection of photographs by Vivian Maier, an artist unknown during her lifetime who left an unusual body of work comprising over 100,000 negatives and undeveloped rolls," says Constance Marchand. "We’ve represented her since 2013 and have already shown her work at three solo and five group exhibitions. We decided to join the OAF after a proposal from John Maloof, who discovered her in 2007." Now there’s something to pique the public’s interest!


Why did you choose photography for this carte blanche?
It was an opportunity to give an overview of the exhibition "Photo-Brut. Collection Bruno Decharme & compagnie", which was held this summer in Arles during the Rencontres de la photographie in partnership with the American Folk Art Museum, where it will be presented in 2020. Here, I’ve selected about 40 works to give an idea of what brut photography is, a first approach to an artistic world that few people have studied yet.

What is your definition of it?
The same as for other media, with the same psychological and sociological conditions, works produced by self-taught and mostly marginal creators outside the conventional artistic circuits, in asylums or the solitude of cities and the countryside. Some do more classical photography, while others use montage, collage, magazine photographs or photographs they’ve taken themselves. We know some of them, including Eugene Von Bruenchenhein and Miroslav Tichy.

Will there be a gallery specialising in photography at the fair?
No. Some galleries focus on photography, such as Lumière des roses (Montreuil), which exhibits Zorro (who stages himself with a whip), but they don’t have any other art brut artist to justify participating in the fair. The dealers present offer some episodically, but I’ve specified what I’ll present so that collectors can acquire works, such as Tichy at Cavin Morris, Birgit and anonymous erotic collages at the Galerie du marché. Prices between young creators and young photographers are quite comparable.
Worth knowing
Round table at Drouot on the art brut market
19 October with Mélanie Gerlis, journalist at the Financial Times,
collector Bruno Decharme, gallery owner Jean-Pierre Ritsch-Fisch and auctioneer Xavier Dominique (Ader).

The Outsider Art Fair: A Very Special Edition
Not to be missed
Fairs