Othoniel As Narcissus at the Petit Palais

The exhibition—an introductory journey through a wonderland of mythology, science and architecture—crowns the French artist, who recently entered the prestigious Académie des Beaux-Arts, with glass and gold. 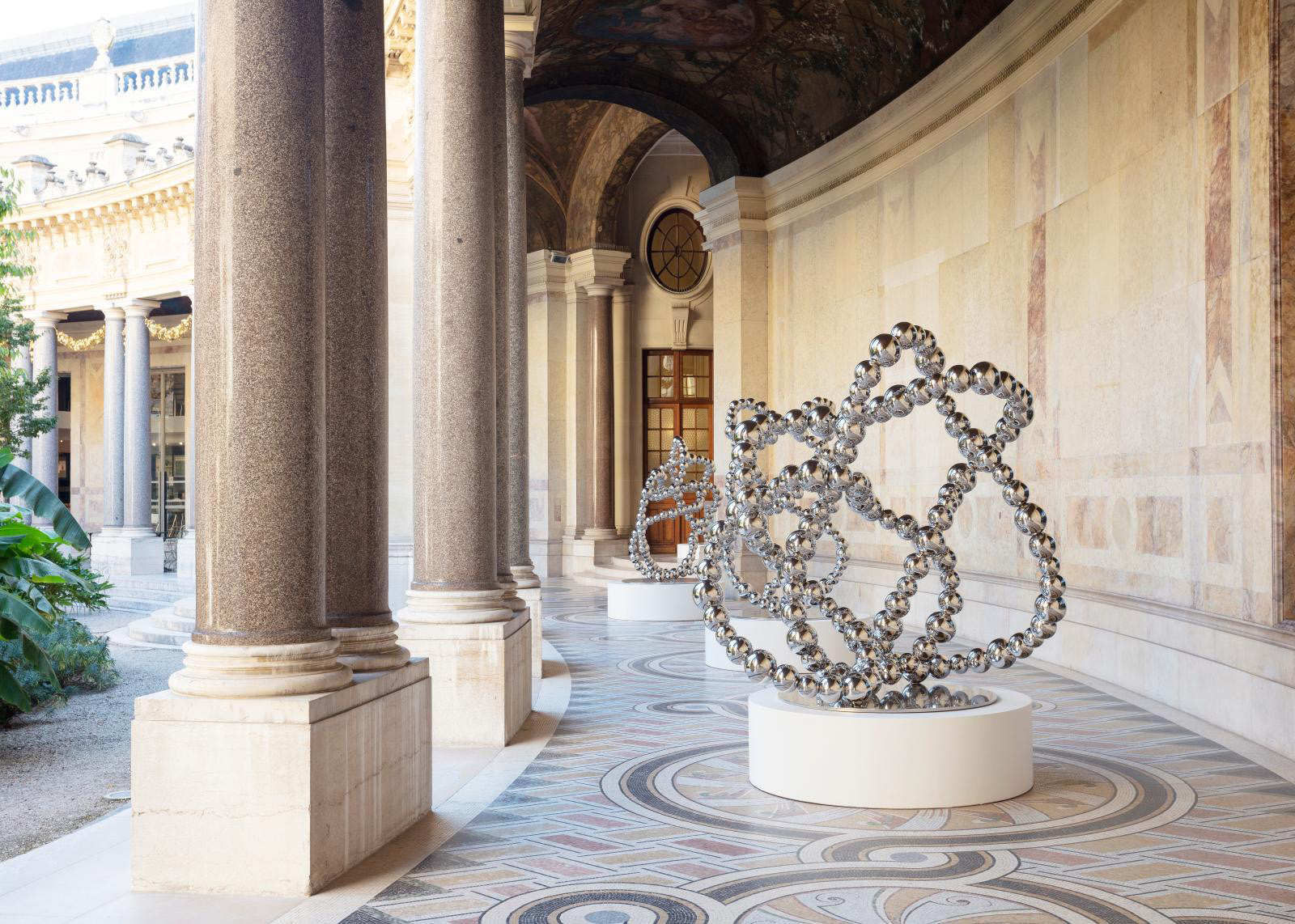 Christophe Leribault, the last director of the Petit Palais before becoming head of the musée d'Orsay, is curating this 70-work show in the building built in 1900—a first. Some of the pieces, made specifically for the exhibition, illustrate the last 10 years of Jean-Michel Othoniel’s creative output. Punctuated by various "passages" from the outside to the inside of the built environment, it evokes the ancient myth of Narcissus, reinterpreted here as "Theorem". Othoniel composes self-portraits in materials with which he is obsessed: beads, bricks, wreathes, a grotto, necklaces, knots and flowers in glass, stainless steel, mirrors, gold leaf and a thousand incandescent tones.

“I wanted to evoke the joyful Narcissus of childhood, who discovers himself, and whose image also reflects the world around him”, says Othoniel. At the base of architect Charles Girault’s Petit Palais staircase, he welcomes visitors with Blue River, a spectacular cascade of blown-glass bricks marking the transition from the real, disenchanted world to another, more magical, one that promises happiness. Under the porch, six knots with silver beads and mirrors reflect Paul Baudoüin's ceiling frescoes, visitors and the surrounding area. They guard the entrance to an exotic garden featuring trees draped in necklaces and pools adorned by golden lotus flowers. Hanging under the Carpeaux Rotunda, the glittering Crown of the Night, now a permanent work in the museum, seems to herald what is happening below-ground level, where, surrounded by glittering brick paintings whose forms recall Othoniel’s first love, minimalist art, the metal agora-grotto, which must be experienced, precedes a monumental lake of bluish glass. Above, a shimmering constellation of Wild Knots seems to float in the air. They are sensitive versions of the theory of reflections and knots propounded by Aubin Arroyo, a Mexican mathematician and friend of the artist.

Free and made accessible by explanatory panels, the show illustrates Othoniel’s ability to create works with bookish references, conceived in relation to the space. Having studied the art of gardens during the period of the Universal Exhibitions, the avid botanist turned this haven of peace into the Garden of Hesperides, where gold-leafed lotuses and sylvan jewel sculptures echo the peristyle’s garlands. On the lower level, the neo-Platonic Grotto of Narcissus evokes the sciences and the cosmos and brings East and West together. The bricks were blown in India. Those of the wall piece Precious Stonewalls sometimes have fiery highlights from which the spirit of the djinns, mythical Arabic creatures, seems to spring, while also alluding to the 1969 Stonewall riots in New York.

In keeping with historic continuity—the curator has deliberately located the end of the show near the medieval rooms—Othoniel, an artist of sometimes ambiguous and restless beauty, is a contemplative, cosmopolitan spirit, nurtured by travel and encounters, who uses fine crafts to create works of art that are the product of emotion and reason with several layers of reading. “More than those of the Louvre or the Gardens of Versailles,” he says, this exhibition assessment combining humanities and sciences, is a poetic invitation to l’Ailleurs (Elsewhere), with the scent of Baudelairian spleen where "everything is order and beauty, luxury, calm and pleasure".

César Rehabilitated?
Newsfeed
See all news
First Major Donatello Exhibition in Nearly 40 Years to Open in Florence
French PCF Deputy Fabien Roussel Opposes the Sale of a Zola Manuscript
The "Printemps de l'Art Déco" Announces its Dates and Program
Preemption: The Art Nouveau Bench by Eugène Gaillard for the MAD
Not to be missed
Exhibitions
Young Ingres at the Musée d'Orléans
How can the beauty of a figure be captured and expressed? How can…
Exhibitions
The Age of Louis XIV on Show at the Alexis Bordes…
With this hang, Alexis Bordes focuses on a few aspects of art from…
Exhibitions
Baselitz Retrospective at the Centre Pompidou
"I am rough, naïve and Gothic", said Georg Baselitz, born Hans-Georg…
Exhibitions
Light Space Time: The Legacy of Nicolas Schöf…
At Avignon’s Grenier du Sel, 14 living artists enter into dialogue…