The curator at the Château de Fontainebleau since 2016 has no shortage of plans, from restorations to exhibitions and promoting the legacy of François I. 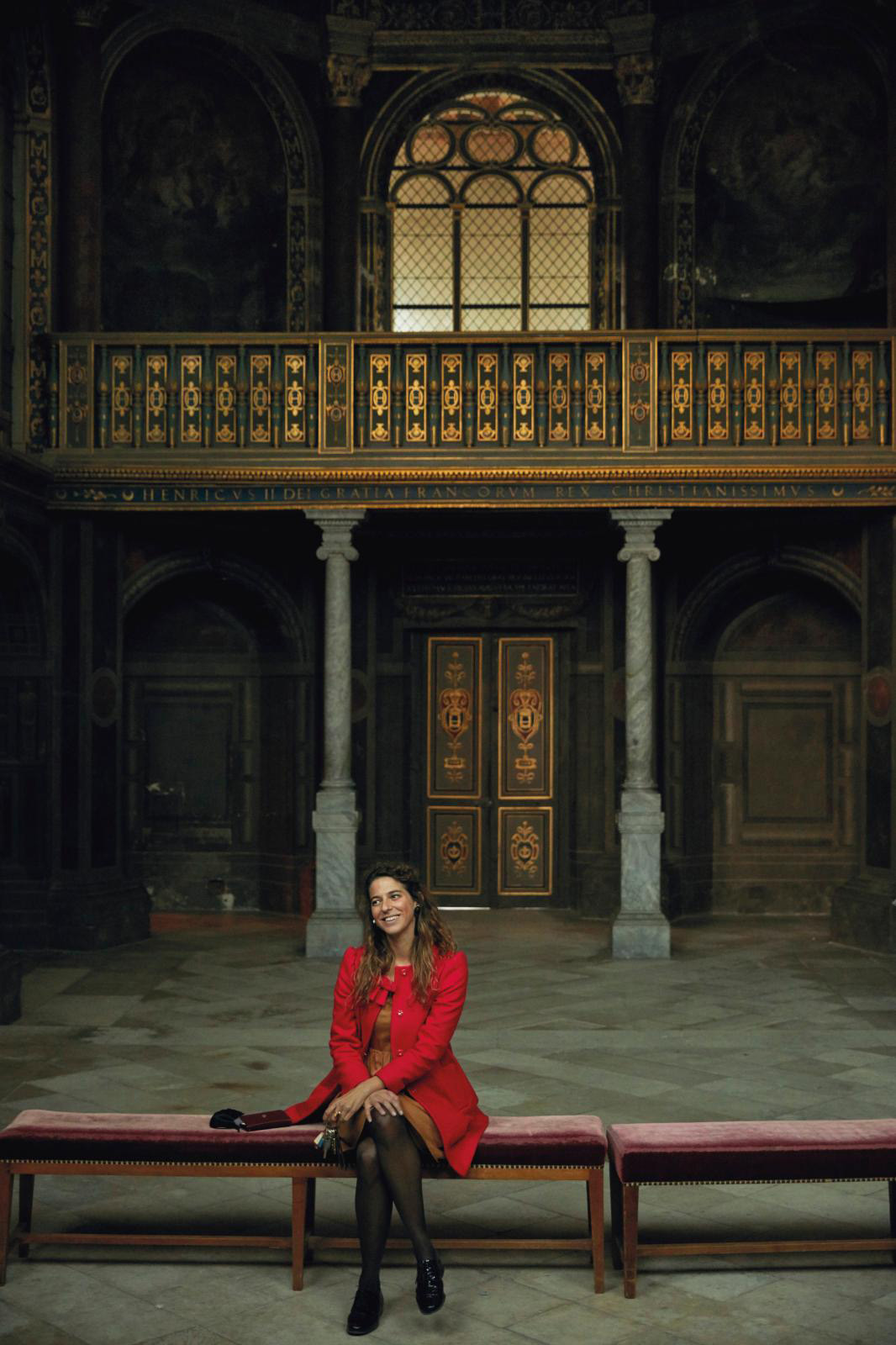 Oriane Beaufils, the painting curator at the Château de Fontainebleau, asserts her passion for Renaissance art while rooting the monument in modernity. Her goal is transmission, a priority for a woman who, during her training, gave art history lessons in prison, and teaches iconography at the École du Louvre today.

The Château de Fontainebleau is usually associated with Napoleon, but it’s a Renaissance monument. How do you intend to feature that aspect?
Fontainebleau’s grand Renaissance decorations are the main reason I dreamed of being here. They’re probably the ones that made its glory over the centuries. I’m fascinated by François I, one of the greatest sovereigns Europe ever had, a great intellectual surrounded by men and women of letters. Brantôme called him the "father and true restorer of arts and letters". French artist Nicolas Poussin said the decorations were a school for painters and, much later, André Malraux called them "the Sistine Chapel of mannerism". They were created by Italian artists called to the court by the French King, starting with Rosso Fiorentino and Primaticcio. Their work was then admired, adapted, transformed and restored at the dawn of the ethics of restoration. Now they’re in a state quite different from the original one in 1540–1550. Many have disappeared. Nevertheless, the world’s greatest art historians, from Erwin Panofsky to André Chastel, have never ceased to study them.

Want to receive news and updates about auctions?
Sign up for our newsletter
What is planned to safeguard and re-reading them?
The restoration of the Golden Gate, the first royal entrance to the palace, designed by Primaticcio in the 1540s, has just begun. This is the first time in 60 years that the Pandora's box of Renaissance decorations has been opened. Revisiting the restoration choices of the past, using new imaging and restoration technologies, and creating the conditions for an international dialog around them are exciting tasks and a captivating immersion into the heart of the matter. The goal is to restore the readability of erudite, sensual decoration to better understand what it shows and tells. At the same time, we’re going to clean and study the frescoes and stuccos in the François I Gallery, as we did in the bedroom of the Duchess of Etampes in 2020. The results will be presented to the public at an exhibition in 2025. Behind all these projects lies the idea of materially understanding these unique settings better in history. For example, the great Fontainebleau school painters were also great sculptors, which is often overlooked. This is of major heritage interest for the palace as well as the focus of my personal research.


You also co-curated the Rosa Bonheur exhibition, a subject very different from the Renaissance.
It’s a leap forward in time, but the Château de Fontainebleau has an important group of 17th and 18th-century animal paintings. Having worked for some time on this part of our collections, it was exciting to continue with Bonheur's paintings, which led me to see points of comparison: reflections on a painting technique adapted to the subject almost breed by breed, the idea of the animal portrait and the connections that could be made between this kind of painting and a society in which the relationship to animals was changing. Mechanization and industrialization were just starting, and Rosa Bonheur said something very powerful about animal plowing, comparable to what Millet did about that of humans. I’m not sure "feminist" is the right word to describe her. I think she wanted to be recognized above all as a painter. In this sense, some of her works, such as Labourage nivernais (Plowing in the Nivernais) or La Fenaison en Auvergne (Haymaking in Auvergne), are real feats, and her desire for rigor and perfection was crowned with success. Fontainebleau was important to Bonheur. She lunched in the ballroom with Napoleon III and went boating on the carp pond, but above all the palace was almost her first museum. Anna Klumpke's bequest of signature works and personal objects, and her request that Rosa Bonheur’s large paintings be displayed there, show that Fontainebleau is a place of remembrance for her and a curator of animal painting.

What is your next project?
When I arrived six years ago, the exceptional collection of paintings by Jean-Baptiste Oudry caught my eye. Most of them have been recessed in the paneling since the reign of Charles X or Louis-Philippe. Fontainebleau has more works by Oudry than any other museum. We have what was probably his life’s project: the monumental oil-on-canvas cartoons for "Royal Hunts", a nine-piece tapestry commissioned by Louis XV for the Château de Compiègne. Oudry not only made many preparatory drawings, oil sketches and cartoons, but also supervised the weaving of the tapestries in the two Gobelins workshops dedicated to the project from 1731 to about 1745. The cartoons are in Fontainebleau in what became the appartement des Chasses (Apartment of the Hunts) in the 1830s. we began restoring them two years ago. By autumn 2024, four will have been restored right here in a studio created expressly for that purpose, in collaboration with the C2RMF (editor’s note: Research and Restoration Center of the Museums of France) and the Louvre. The exhibition will display them alongside the tapestries thanks to a fruitful, renewed partnership with the Palazzo Pitti in Florence. We’ll explore the genesis of one of the 18th century’s greatest masterpieces, a thrilling prospect. It’s part of an overall context of dynamic research on Oudry that began with the PictOu project, a database dedicated to his painting technique, and the work that the Musée de la Chasse et de la Nature has carried out in Paris.


How do you view the curatorial profession?
It’s continuously changing. I’d like to give it a more festive touch, to explain the passion that drives us, even if that means being a bit provocative sometimes. The past is set apart as sacred. But as early as 1539, the first ambassadors to Fontainebleau left thinking the murals were ugly. In this respect, training the eyes of young people is very motivating: transmission remains an essential mission for me.
Worth Seeing
"Capturing the Soul. Rosa Bonheur and Animal Art", Château de Fontainebleau, Fontainebleau.
Until January 23, 2023.
www.chateaudefontainebleau.fr

Worth Knowing
In association with the Fondation du patrimoine,
the Château de Fontainebleau has launched a drive to raise €350,000 of the 650,000 necessary
to restore the Golden Gate (#UnGesteHistorique).

Light on the Secular Decoration of the Château d'Anet, Diane de Poitiers' Fief in Eure-et-Loir

The Palazzo Butera: A Place of Exchange
Not to be missed
Interviews