On the Road with André Becker’s Carriage Collection

The auction of André Becker’s carriage collection is a major event in a highly specialized market. 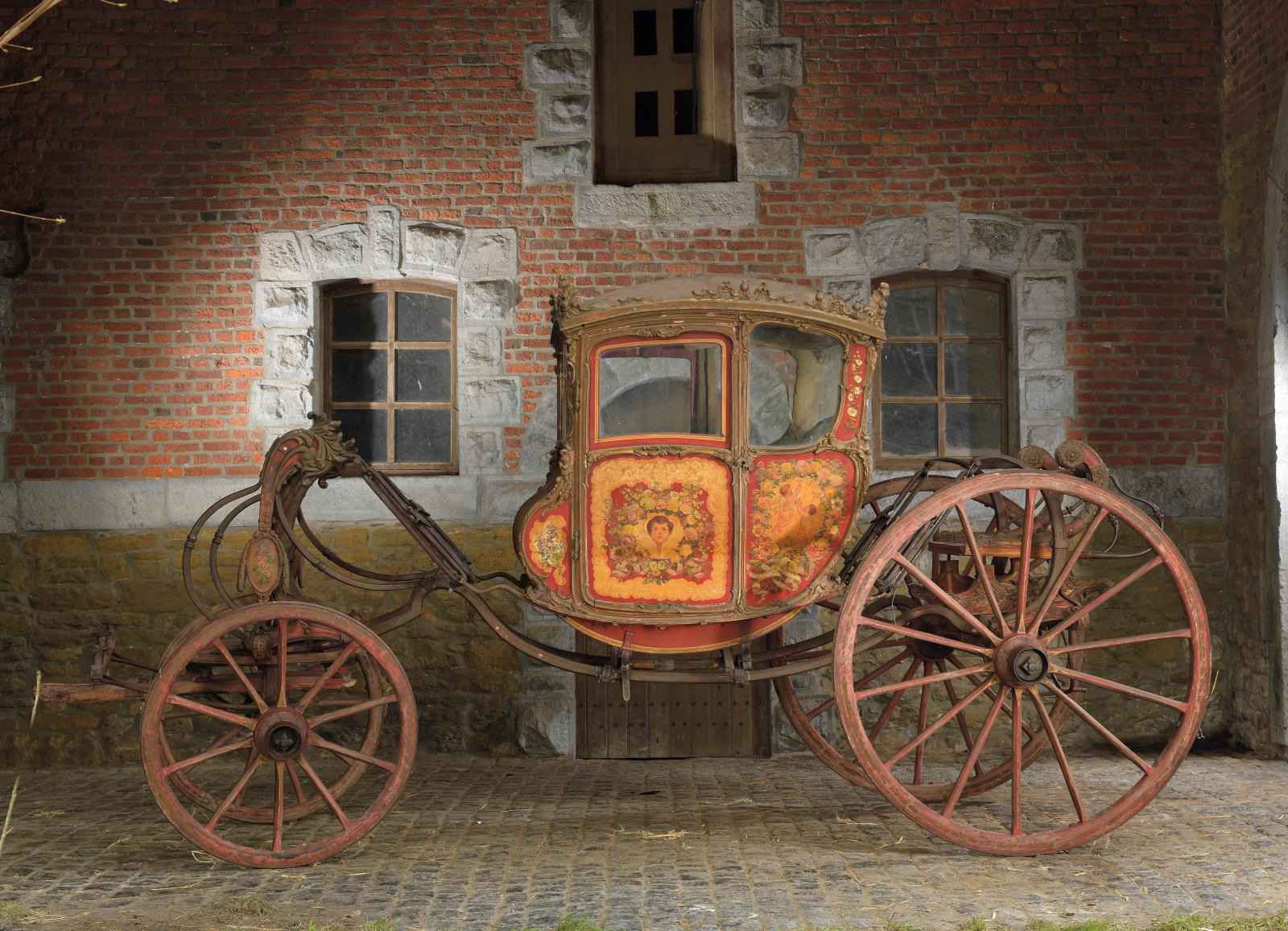 “A collection of this magnitude hasn’t appeared at auction in over 30 years. That’s exceptional,” says Patrice Biget, the expert of the sale led at Drouot by Benoît Derouineau of the Daguerre auction house in conjunction with Anhée, near Namur, Belgium, where the carriages are in storage. The collection will surely spark the excitement of enthusiasts worldwide and take us back to the historic and material sources of the horse-drawn vehicle, which combined technological progress with artistic achievement. the invention of the modern carriage is attributed to Frenchman Jean Le Pautre, who developed it in the 1660s in Paris with, among other things, the possibility of better steering. From gala carriages, like the ornately decorated 1848 grand berlin from Portugal (€20,000/30,000), to a road coach used for sports or leisure activities (a beautiful example is in the sale, estimated €40,000/50,000 and a two-wheeled gig (cabriolet) from c. 1830 (€800/1,000), horse-drawn vehicles have always been an art of living, a civilizing object combining social, cultural and political characteristics and an outdoor living room that accompanied the owner on their journeys through life.

A Low-Profile Collector
France, being a land of construction and innovation in this means of transportation, has prestigious collections. In the latter half of the 20th century, Dina Vierny (1919–2009), an inveterate collector and sculptor Aristide Maillol’s muse, and André Becker, a discrete industrialist from Coignières in the Yvelines, were major carriage collectors. Becker, who made a fortune from patenting the igloo tent, died last year at the age of 94. He had a passionate interest in military memorabilia and in the 1970s started collecting animal-drawn vehicles, buying a great deal and selling very little. He had the space to keep them and exhibited some of his treasures in his private horse-drawn carriage and transport museum. When Vierny died, Becker bought some of her pieces directly from her heirs, which can be found in the catalog, whether crank, spring, lever or foot-operated. After about 15 vintage sleds, the heart of the sale will feature over 100 rare horse-drawn carriages. It will also include accessories (spurs, muzzles, boots, coachman’s coats, etc.), approximately 50 lots of lanterns, some by master craftsmen, and about 50 lots of period documentation in this highly technical field.

The Ferrari and Rolls-Royces of Yesteryear
What did Becker look for? "He was interested not just in prestigious vehicles but especially in rare ones," says Mr. Piget. These included public coaches, like the c. 1880 40-seat “Hôtel de Ville Versailles” omnibus (€15,000/20,000)—probably, says Mr. Piget, one of the last in private hands: for safety reasons, by law they had to be destroyed after 10 years. The sale also includes service vehicles used by Parisian merchants, such as a rare two-wheel patache from the first quarter of the 19th century (€2,000/3,000) and a simple, dog-drawn ragman’s cart (€100/150).

The auction will combine prestige with rarity. Symbols of wealth, rank and power, many horse-drawn carriages were commissioned by great families. They were the equivalent of today’s Ferraris or Rolls-Royces. The large travel coupé long thought to have belonged to Chateaubriand was actually owned by the Count of Sales, Sardinia’s ambassador to Paris. In remarkable condition, it perfectly illustrates Becker’s two requirements: quality and distinction (€40,000/60,000). Its provenance and the fact that it was used by a historical figure add to its value. Family lore has it that Eugène Delacroix used the travel carriage with a brown lacquered boat body that could be completely closed in winter for the trips from Paris to Rome (€40,000/50,000).

The sale also includes a three-wheeled trirote built c. 1800 in Pavia, Italy, by Antonio Bottigella, the only known piece of its kind (€30,000/40,000). The auction’s 130 carriages are in working order. One of them, an Empire Period "bastardelle" travel coupé owned by a silk merchant in Lyon, where Boneberge built it c. 1805, is even a designated historic monument and, therefore, cannot leave France (€50,000/60,000).

Eighteenth-Century Gems
The estimated number of horse-drawn carriages in private hands in Europe is put at 10,000. Most date from the 18th and 19th centuries. Approximately 20 of the 500 to 600 carriages known in French public collections were built in the 17th century, says specialist Jean-Louis Libourel, honorary head curator of heritage and co-author of the auction catalog. The full history of carriages, he says, has yet to be written. In this niche market, Becker preferred vehicles built before 1850. The further back in time one goes, the rarer and more precious the pieces and information are.

An International Rare Book Fair: Beautiful Books on the Champ-de-Mars, in Paris
Newsfeed
See all news
Bonhams Opens Salesroom in Paris
Dutch Monument to Those Murdered by the Nazi Regime Opens – But Also Meets Opposition
Giant Violin Floats Down Venice’s Grand Canal
Picasso Exhibition to Finally Open in Toronto in Early October
Not to be missed
Spotlight
A Table Commemorating the Liberation of France by the…
Mystery shrouds this unique, previously unknown table made in 1947…
Spotlight
A Treasure of Gold Coins Found in Brittany
In 2019, a couple and three stonemasons found a trove of coins dating…
Spotlight
Binoche et Giquello Present a Giant Triceratops Called…
Thrusting out its emblematic skirted skull and sharp horns, this…
Spotlight
Indian Motorcycles’ Legendary Big Chief
Made for the road, Indian’s red-liveried, interwar, upscale Big…