The founder of the Dansk Møbelkunst gallery certainly helped the emergence of the Scandinavian design market. Specialising in 20th century furniture and Danish master cabinetmakers, he is now broadening his scope with a contemporary collection. 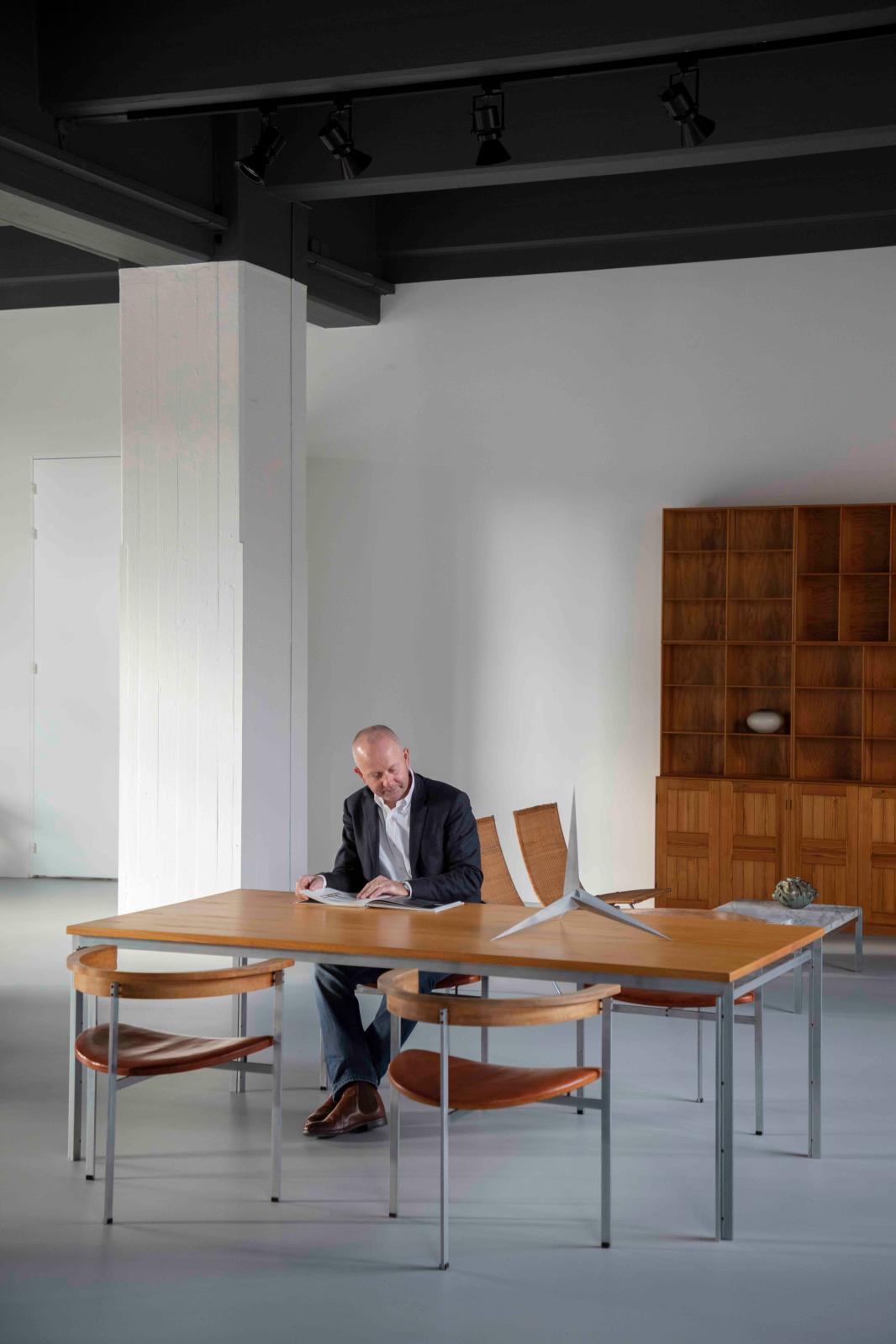 How did you start out in the business?
Thirty years ago, my passion led me to start collecting designer furniture and pieces produced in cabinetmakers' workshops, as I gradually discovered them in the Copenhagen flea markets. I opened a store in 1992. At the time, professionals and the general public were interested in the creations of young designers because it was almost impossible to get hold of historic pieces, which were rare and very expensive. As dealers, there were only two of us exploring this field in Copenhagen.

What were the first pieces you fell for?
The first lamp I bought was one of Poul Henningsen's Artichoke lamps, designed in 1958. My first piece of Danish furniture was a 45 Chair by Finn Juhl. Its organic form and ergonomics make it timeless. And Finn Juhl is a major figure, because he's the one who introduced design to Denmark.

In what way is the furniture you promote unique?
Modern Danish pieces were mostly made by cabinetmakers, and their quality was outstanding. Between 1927 and around 1996, Denmark's cabinetmakers learned to produce items with architects and designers, and the Royal Danish Academy of Fine Arts taught its students how to make furniture. It was a winning combination. But in the 1960s, many factories and production workshops in Copenhagen started to close down, though many of them had existed since the 1920s. The way in which they worked, where time was not a consideration, no longer fitted with current profitability imperatives.

When did the 20th century Danish furniture market makes its appearance?
When I started out, there was little interest in this type of furniture in Denmark. These pieces began to be distributed during the Fifties and Sixties, and then their prices shot up in the following decades, when the public was increasingly buying new furniture in kits, or turning to major Italian producers. The revival of interest fostered by the 20th century design and craft furniture market really dates from the 1990s, when first Japanese and then American collectors came to Denmark to look at the furniture, and started to buy it. Then the Europeans took over, particularly the Belgians, French and Swiss.

How did you build up a clientele?
Private buyers began to come to us, then professionals like interior designers. They were chiefly looking for high quality design and fine workmanship in this furniture. Art collectors also expressed a keen interest for pieces with historical value, but paradoxically, they weren't particularly influenced by big designer names or their importance in the history of design. Their main idea was to live comfortably with the furniture they bought.

How do you view your participation in art, antiques and design fairs?
The cartography of these events is changing. Their size varies, and we adapt accordingly. For instance, we have taken part in the FIAC in Paris, the BRAFA in Brussels, The Salon in New York and the PAD in Paris. Sometimes we have had a few surprises, like our first experience of Art Brussels, where we sold the entire contents of our stand the first day. Design Miami Basel is a highly significant event for us, as is the TEFAF, which we have attended regularly for the last seven years. We'll be exhibiting in the next editions of this fair in Maastricht and New York.

How has the trade changed?
It was a lot easier a few years ago. Interesting pieces are more difficult to find nowadays. Also, after a craze for Danish vintage furniture that lasted several years, the market is now slowing down, despite the latest records at auction achieved by museum pieces. I'm thinking particularly of the €319,000 achieved with Artcurial last October by one of Niels Vodder's 1938 Grasshopper chairs. There are only two of these around, and they come from Finn Juhl's house to boot.

Is that the only reason you decided to offer a contemporary furniture collection?
No: it also reflects our desire to establish contemporary creation in the Danish cabinetmaking tradition, and to offer a limited output of top-quality furniture and objects, produced by independent workshops which take account of this history and work closely with designers. To do this, I made contact with the Cypriot designer Michael Anastassiades, whose work in lighting I greatly admire, and the Danish designer Claus Bjerre from the world of industrial design.

What are the particular features of these pieces and how do they fit into the history of Danish furniture, as promoted by you?
Wood is the focus of this collection. Michael Anastassiades has created a table and a screen, each produced in editions of eighteen with two artist's proofs. There is also an edition of twenty-eight stools and two artist's proofs in Oregon pine, a variety used by Arne Jacobsen and Mogens Koch (...) Their look is simultaneously rustic, minimalist and sculptural, making them highly decorative as well. The chest created by Claus Bjerre is remarkable. It uses an experimental production and assembly method. This piece harking back to the Scandinavian marriage chest is made up of hundred and twenty pieces of pre-cut wood mixed together.

What other projects do you have?
We are really happy that this collection is proving a hit with our customers, particularly interior designers. So, we are working on producing new pieces with Danish designers, and hope to unveil them in the spring. Meanwhile, the Paris gallery we opened in 2002, which put us on the international map, is presenting an exhibition devoted to Finn Juhl from 28 March to 3 May 2019.

1992
Dansk Møbelkunst opens in Copenhagen.
2002
A gallery opens in the 6th arrondissement, Paris.
2018
Creation of a contemporary furniture collection.

Antique Dealer Laurence Vauclair and the Art of Entertaining

Hervé Van der Straeten and Alexandre Biaggi: A Pair of Aesthetes
Not to be missed
Interviews