Its iridescent shades have made opal a much-prized gem since classical antiquity. Though difficult to imitate, this stone inspired glassmakers to start producing magnificent opal crystal in the 19th century, before gradually shifting away from the specific features of its model. 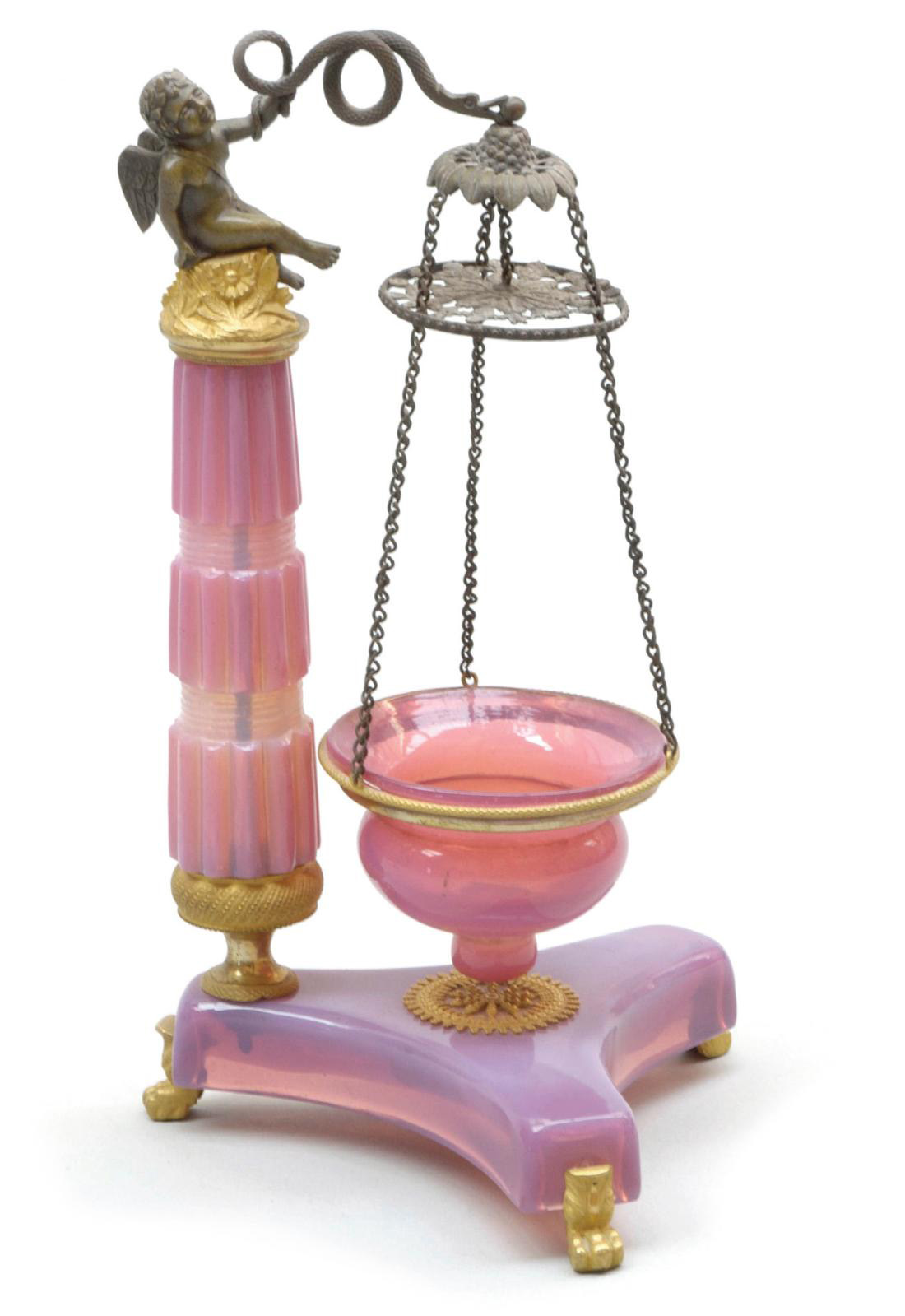 Opaline is a term that can be used to describe a wide variety of different types of materials. Especially because between the beginning and the end of the 19th century, the material evolved rapidly, shifting from crystal to glass, and from luxury to mass production. Before that, in the late 18th century, a few opal crystals with soapy shades had been obtained by adding tin oxides and charred bone, but the opaline that emerged in the 1810s looked more like the stone it sought to imitate. Luxurious decorative objects then sported opalescent and translucent shades of great delicacy. The iconic gorge-de-pigeon—an iridescent purplish-pink—was obtained by adding gold salts, but was not as rare as amber yellow, which disappeared after 1820 because of its technical difficulty. While the Baccarat and Saint-Louis crystal factories were certainly the most famous opaline producers, they were not alone. Until 1832, the Le Creusot crystal factory produced elegant heavy crystal pieces with sophisticated colors (including amber yellow), widely praised for their subtlety. Forms and uses were similar to those of the crystal industry and had a certain affinity with porcelain products, as seen in the gilt net and plant friezes: motifs achieved to perfection by Jean-Baptiste Desvignes, a gilder active in Paris from 1817 to 1826. The sober lines inspired by classical antiquity were sometimes set off by gilt-bronze mounts that enhanced the piece and its value alike.

A Profusion of Colors
From 1830 on, advances in chemistry led to a proliferation of colors, and opaline was a speaking illustration. Flax blue and lavender blue appeared around 1825-1830, followed a decade later by chrysoprase green (based on uranium), considered specific to Baccarat, as was ultramarine. Between 1840 and 1880, the multiplication of colors went hand in hand with a gradual decline in quality. The iridescence once so popular was now only a memory, as crystal was gradually dethroned by first half-crystal,  colored glass, then glass with a second layer of glass or enamel known as overlay. Apart from soap bubble opaline, translucency was no longer sought after, and color ranges became increasingly vivid, opaque and contrasting, portraying the specific features of a period and its innovations rather than a particular manufactory. This was also true for the painted decorations that appeared from 1835 onwards; in this field, no company could hold a candle to Jean-François Robert’s workshop (active from 1837 to 1855), which worked in all kinds of styles ranging from naturalistic to romantic scenes. Baccarat and Saint-Louis called on its services, and the success of these painted pieces inspired imitations. The fear of dubious copies led to the use of transfers: a satisfactory and economical solution that became highly popular. But the most remarkable innovations were only found in top-quality products. For example, the Bercy factory achieved the extraordinary feat of heat-assembling four different-colored opalines, as seen in some rare bowls. Soon the demand for opaline tableware became as high as for ordinary glass products at Baccarat, which then turned to mass production. This rapid industrialization and the equally rapid glassmakers of Bohemia satisfied the French craze for opaline with a wide range of mediocre glassware in bright colors at attractive prices. Bronze mounts were replaced by pomponne (a zinc and copper alloy resembling gold) or brass, and antique or fashionable pieces were copied. A novelty with a bright future emerged during these years: "rice paste" opaline, a semi-opaque non-reflective glass that could be colored, particularly in pink, yellow, blue and green.

Decadence
The factories of northern France, especially those in Portieux and Vallérysthal, specialized in the industrial production of blue, almond green and light brown domestic opalines, and met the demand for religious objects as well as the pharmaceutical and cosmetics industry’s requirements for opaline packaging (bottles, ointment jars and boxes), which were always white. Although opalines rarely featured their manufacturer’s mark, those stamped "SV" were produced between 1823 and 1908 by Schmidt Verreries. These products are mostly molded and often have seams or a round mark on the underside. The turn-mold blowing technique enabled the production of seamless pieces, due to the continuous rotation of the rod during the entire molding process. The quality did not improve miraculously, but the result was certainly more aesthetic. Unfortunately, despite everything, opalines declined into garish, mediocre products with crude decoration: a downfall that earned them the name of “market” opalines. The pineapple holders and night accessories fashionable under Napoleon III gave way to small baskets, hands holding trumpets and an improbable number of chicken-shaped butter dishes, sold in markets or used as lottery prizes until the 1930s. Art Deco attempted unsuccessfully to revive the material, particularly in lighting. After all these chromatic excesses, opaline has wisely returned to a delicate humility, perhaps while awaiting a contemporary rebirth.

WORTH SEEING
The collection of opalines from the Empire and Restoration periods at the Musée des Arts Décoratifs in Paris.

L'Escalier de Cristal: A Learned Study Traces the Renowned Parisian Establishment’s History
Newsfeed
See all news
We Are on Break for Our Annual Summer Hiatus - Back in August! Happy Summer
A Michelin Star for the Museum of Modern Art in Fontevraud
World Record for the French-Danish Painter Gerda Wegener
Canadian Indigenous Groups Ask Vatican to Return Cultural Artifacts
Not to be missed
Glossary

The 19th century certainly witnessed a notable dichotomy in the sphere...

The creation of the royal tapestry workshops under Louis XIV broke...