Oasis composer and lyricist Noel Gallagher wrote some of Britpop’s best songs with the group. This Gibson ES-355, his favorite guitar, was smashed during the fight with his brother that spelled the end of the legendary band. It has since been restored. 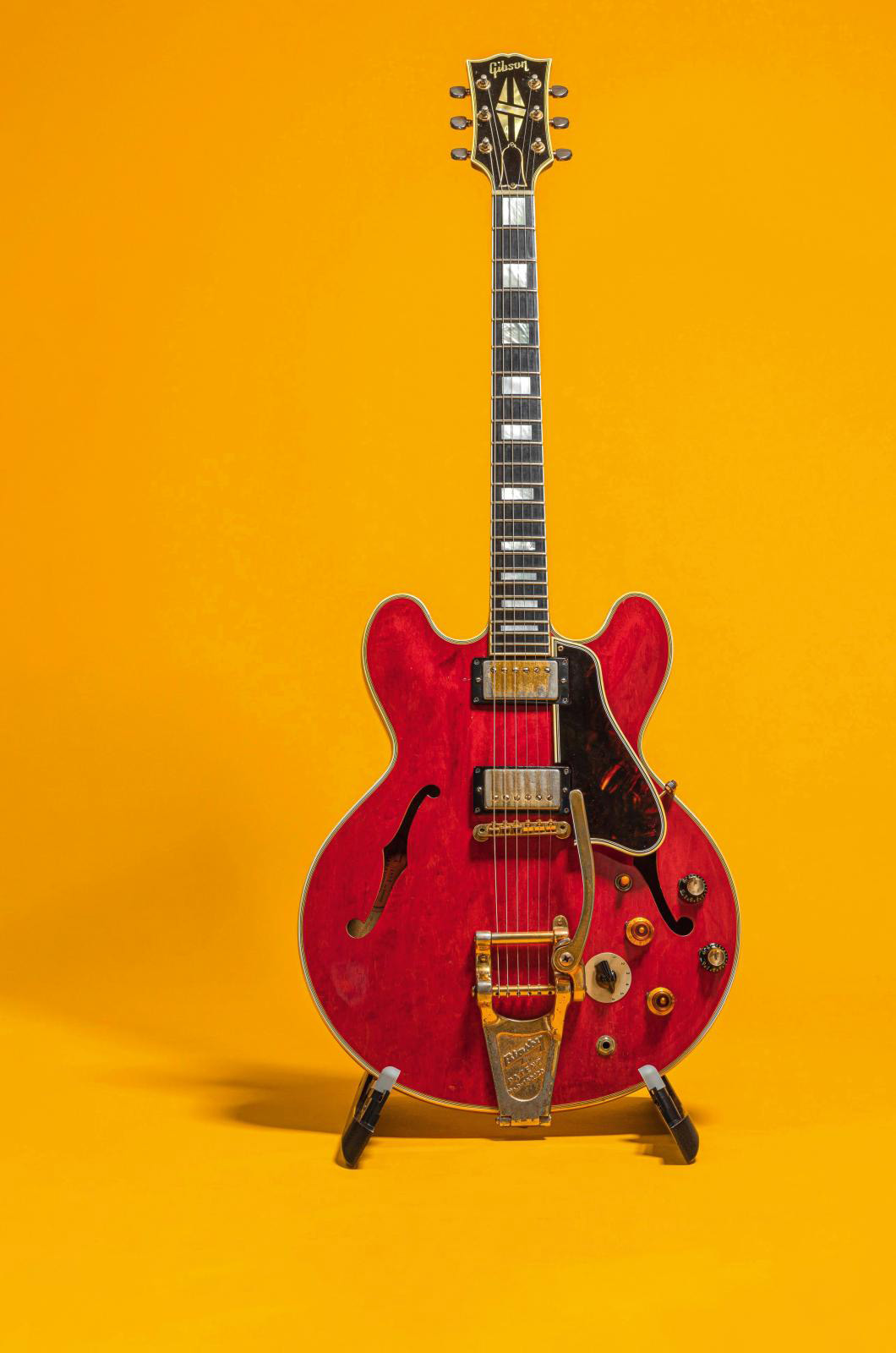 How did two brothers who could never stand one another manage to unite an entire country behind their music? Probably with the quality of their songs, which were written mainly by Noel and performed with pride and nonchalance by Liam. But the explanation is not just musical. The Gallaghers grew up in a dysfunctional, low-income family in Manchester. When they emerged as the new Beatles in the 1990s, they restored pride to a working-class just recovering from Thatcherism. Their outrageousness and destructive tendencies set them apart from other Britpop bands like Blur and Pulp, which had a less threatening appearance. Oasis is "the revenge of the rednecks", to use the title of Nico Prat and Benjamin Durand’s book about the band’s history. Their hits—Wonderwall, Don't Look Back In Anger, Rock 'n' Roll Star, Some Might Say—helped turn 1990s Great Britain into "Cool Britannia". "It’s with some sadness and great relief to tell you that I quit Oasis tonight. People will write and say what they like, but I simply could not go on working with Liam a day longer." The press release published by Noel the day after their fight at the Rock en Seine festival in Saint-Cloud, just outside of Paris, on August 26, 2009, signaled the end of the band. The blow-up, where blows are said to have been exchanged, had a collateral victim: Noel’s favorite guitar, his Gibson ES-355, smashed after being used as a projectile. "My 1960 355 is the best guitar I’ve ever played," he said. It appeared for the first time in the video of Stand By Me from the album Be Here Now (1997). The massive six-string guitar, identifiable by its two decorative gills, was prized by B.B. King, Eric Clapton, Johnny Marr and The Smiths. It was out of admiration for the latter that Noel and Bernard Butler, of the band Suede, bought the same one. In 2011, Noel entrusted the damaged instrument to Philippe Dubreuille, a London-based luthier who works for the biggest names in the field, including Iggy Pop, Ben Harper, Joe Perry (Aerosmith), Billy Gibbons (ZZ Top), Robert Smith (The Cure) and Andrew Innes (Primal Scream). The perfectly restored Gibson-355 now looks "vintage correct" and was used in High Flying Birds, Noel’s solo project. But each pick stroke reopens old wounds, so he has finally decided to sell it and close the book on Oasis. While the news will delight collectors, it will dampen the hopes of fans dreaming that the brothers will get back together. Liam is pursuing his own career, but has said several times in interviews that he hopes for a reunion one day. Who knows? Stranger things have happened in the history of rock.