Instead of spending time and money on organizing yet another temporary “all women” exhibition, museums should direct resources to achieving true equality in their collecting and display practices. 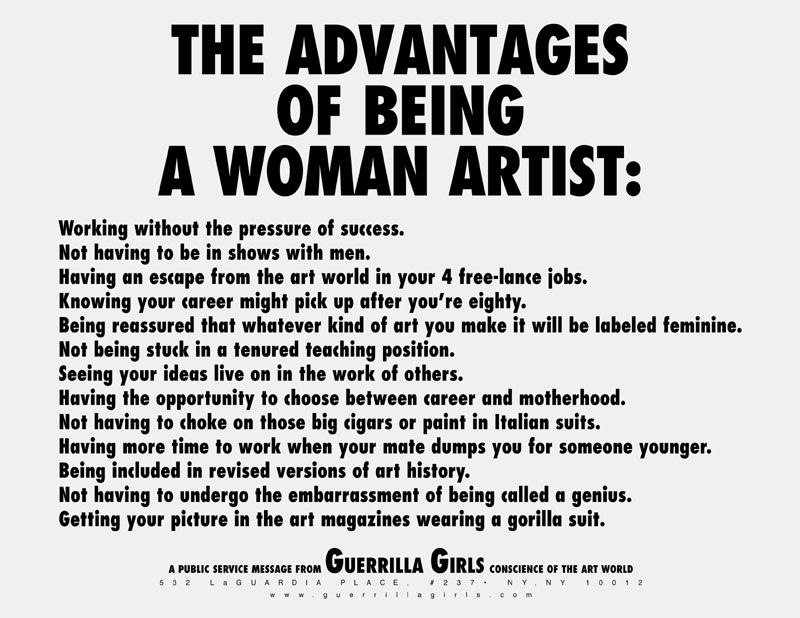 Guerrilla Girls, USA, established 1985, The Advantages of Being a Woman Artist.
Courtesy of the Cooper Hewitt, Smithsonian Design Museum

Guerrilla Girls, USA, established 1985, The Advantages of Being a Woman Artist.
Courtesy of the Cooper Hewitt, Smithsonian Design Museum

There was a time when the “all women” exhibition was radical and necessary. By foregrounding the artistic production of women, it made an important contribution to art history, introducing both specialists and the general public to artists previously excluded from the canon. For instance, the groundbreaking 1976 exhibition Women Artists: 1550-1950, which debuted at the Los Angeles County Museum of Art and traveled to three other institutions in the United States, showcased eighty-three artists from twelve countries, radically expanded scholarly understanding of American and European art. According to the curators Ann Sutherland Harris and Linda Nochlin, the exhibition’s goal was “to make more widely known the achievements of some fine artists whose neglect can in part be attributed to their sex and to learn more about why and how women artists first emerged as rare exceptions in the sixteenth century and gradually became more numerous until they were a largely accepted part of the cultural scene.” In this respect, the exhibition heeded the call of Nochlin’s 1971 essay “Why Have There Been No Great Women Artists?,” in which she urged a more rigorous self-examination of the field of art history in order to “pierce cultural-ideological limitations [and] to reveal biases and inadequacies not merely in regard to the question of women artists, but in the formulation of the crucial questions of the discipline as a whole.”

In the decades since that landmark exhibition, institutions have taken up the idea of “all women” exhibitions as a means of demonstrating that there have, in fact, been great women artists. While such shows might have value in bringing to the public’s attention the work of female artists who have been forgotten or previously unknown, more often than not, these exhibitions unwittingly contribute to the marginalization of female artists. They reduce the artwork’s value to its creator’s gender and separate it from broader histories of art. Rather than showcasing the innovative power and brilliance of works by female artists, these exhibitions diminish them to something along the lines of “and women were doing this too!”

A more successful approach to identity-centered displays and one that takes Nochlin’s call for self-examination seriously would include addressing various biases at the institutional level. The seminal 2011 “elles@centrepompidou” project offers an example of museums revisiting their collections to highlight works by women. For the project, the 4th- and 5th-floor permanent collection galleries were re-hung to display only works by women. Featuring art by well-known artists next to virtually unknown ones, “elles@centrepompidou” highlighted the omnipresence of women in the development of modern art, while also showcasing the sheer amount of remarkable works by female artists in the Center’s permanent collection. The re-hanging of the galleries also implicitly raised important questions about the museum’s usual display of its permanent collection and the reasons for which these works by women artists had been relegated to storage.

To argue against the “all women” shows is not to say that museums do not need to take active steps towards gender parity. We need more rigorous monographic exhibitions of women artists that clarify (for those still not clear) their centrality to the history of art. Such exhibitions stimulate purchases for permanent collections - an important expansion of institutional holdings and an investment into the future understanding of art. We also need more exhibitions that thoughtfully address histories of discrimination and exclusion in the art world and society more broadly. An example of the latter is the recent show “Women Painters, 1780-1830” at the Musée du Luxembourg in Paris which explicitly focused on the changes in social and cultural conditions that allowed women not only to make art at the time, but also to earn a living as artists. Most importantly, however, art institutions need to strive for a lasting commitment to equality, especially when it comes to building their permanent collections. A significant and persistent gender gap defies the rhetoric of inclusion embraced by institutions around the world. The 2019 Artnet investigation revealed that only 11 percent of all museum acquisitions in the United States over the past decade have been of work by women. This startling number demonstrates that the intermittent revisions to the canon, embodied in the “all women” exhibitions, do not promote lasting change.

In 1988, Guerilla Girls published a sardonic list of the Advantages of Being a Woman Artist. Among the “advantages” are “not having to be in shows with men” and “being included in revised versions of art history.” Isn’t it time for art institutions to finally stop marginalizing female artists under the pretense of celebrating them, or worse, “discovering” their existence? Instead, before planning the next “all women” show, institutions should take stock of their wider practices and reflect on their motivation: is this exhibition a part of a broader commitment to equality and a revision of ingrained practices, or is it a superficial checking of the proverbial inclusion box?

Paula Rego: Capturing Womanhood
Newsfeed
See all news
Whitney Gifts Warhol Research Archive to MoMA
England’s Culture Sector to Receive £850 Million Extra Funding
Success for Paris Internationale Latest Edition
Cécile Debray Takes Over from Laurent Le Bon at Paris’ Musée Picasso
Not to be missed
Opinion
The French Senate Takes Up the Issue of Restitution
Opinion
Moving Beyond the “All Women” Exhibition
Instead of spending time and money on organizing yet another temporary…
Opinion
Restitution: Amsterdam’s Example
In the Netherlands, the restitution by the Stedelijk Museum of a…
Opinion
Restitutions: France Is Still Putting Up Resistance