In Paris, the Mallorcan painter puts the finishing touches on his latest paintings in preparation for various exhibitions this fall. His studio is a rich cabinet of curiosities reflecting a many-faceted art. 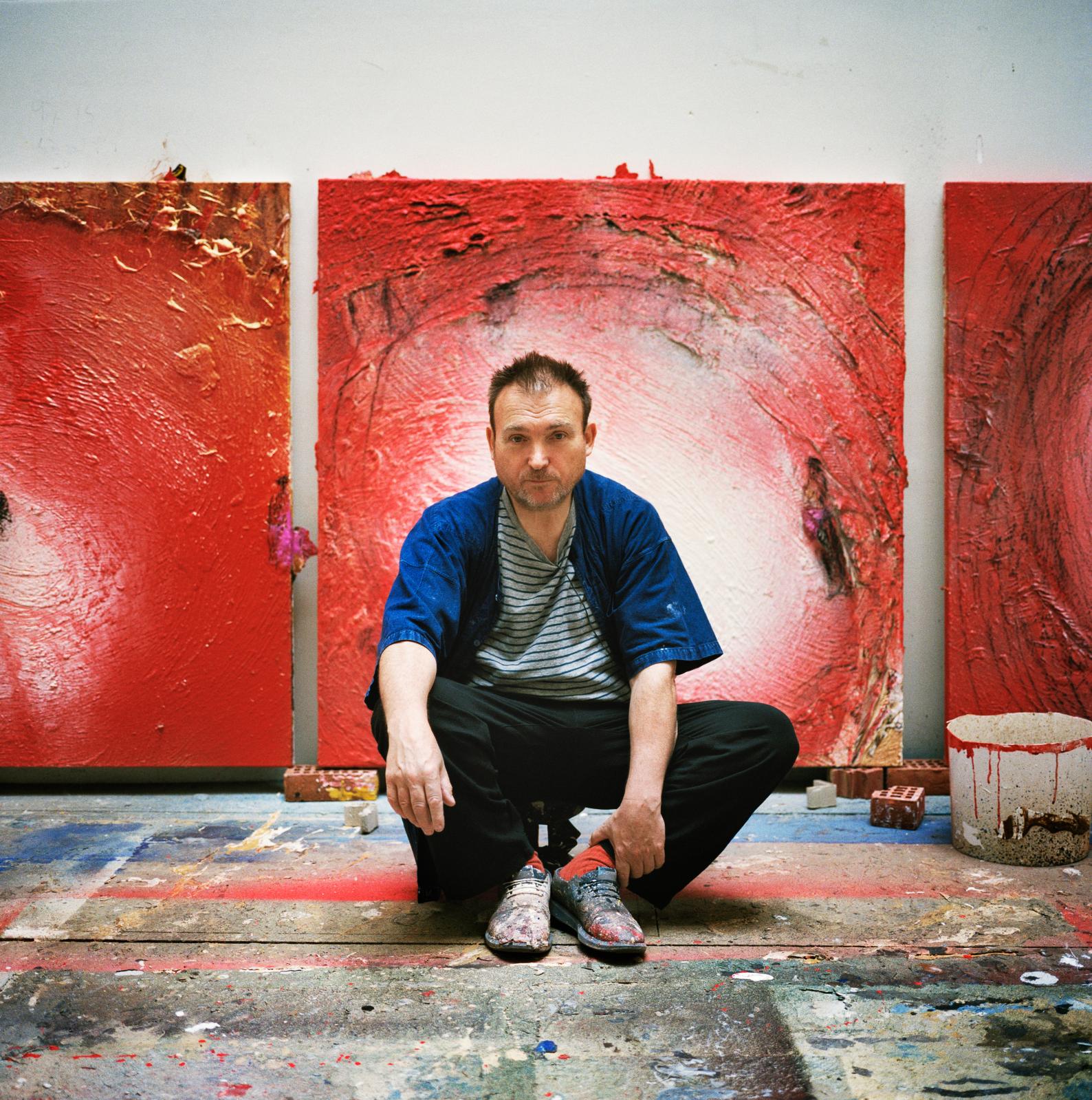 In the Marais, in central Paris, Miquel Barceló set up his artist-craftsman’s paraphernalia in the 1990s in a former textile factory, taking over every floor. “I’ve always had several studios in my life,” says the chatty artist, born 65 years ago in the little village of Felanitx to a painter mother and a farmer father. “When I moved to Paris in 1984, I set up on Rue du Faubourg-Saint-Antoine, home to the headquarters of Radio Nova. A few years later, I had places in the 5th and 7th arrondissements, then the Buttes-Chaumont. In Majorca, where I spend most of my time, I own two large studios. I have another one in my home in Mali, in the Dogon country, but unfortunately, I have not been able to get there since 2012.”

In this fine building overlooking a courtyard, the studio reveals the many faces of this protean artist. In one of the first rooms, engravings hanging next to each other on a wall immediately proclaim his obsessive love of bulls and bullfighting. “In Spain, I own some 20 bulls, as well as many other animals. For me, bullfighting does not go against the environmental cause, and that’s something my environmentalist friends don’t understand: no more bullfighting means no more bulls. There is a beauty in this art, towards which I feel very ambivalent.” In another room, neatly filed in a bookcase, travel journals full of watercolor sketches reveal the roaming artist. “Whether I’m in Paris, Greece, Thailand or Egypt, I practice this technique nearly every day,” he says. “These notebooks containing these quickly executed drawings, mingling human figures with animals and plants, make up an entire corpus. I paint my whole life here.”

Everywhere, the studio betrays a bulimic attitude to work. In this eccentric creative space, countless sketches, posters and paintings of all sizes, either finished or in progress, rub shoulders with a few sculptures and ceramics, utensils and artifacts of all kinds, as well as numerous buckets full of pigments, which have left traces on the walls and floor. In what could be a taxidermist’s backroom, full stuffed animals, the star of current Spanish art describes the range of tools lying on a table: “Here you have a gynecologist’s instruments; there the tools of dentists, shoemakers, butchers and mountaineers found in flea markets or on my travels, which I like to subvert. For Rimbaud, the 19th century belonged to the hand; this was rejected by the next. Today, we have joyfully inherited all these tools.” Further on, an eye-catching skeleton and gorilla masks in terracotta are exhibited high up, not far from a wall painted with ochre earth, where he has hung an elephant’s ear (a gift), a Dogon statuette and a monkey skull. Miquel Barceló’s highly physical world is made of earth and populated with spirits. The studio illustrates an entire universe teeming with figures: the immense naturalia of a continent straddling Africa and Europe, mingling Dogon cosmogony with the bullfighting tradition and the Mediterranean sea.

The Memory of Painting and Its History
In a large adjoining room, several recent paintings are waiting to go off to a solo show at the Thaddaeus Ropac Gallery in Pantin. Another, Grisaille with Swordfish, will be included in the exhibition “Les Choses” (“Things”) at the Musée du Louvre. Inspired by 17th-century Dutch still lifes and the tradition of the Spanish bodegón, these large pieces feature his favorite bestiary, as always. On sometimes teetering tables, rabbits, lobsters, octopuses, swordfish and eels intermingle with candlesticks, knives, melons and dripping bouquets of flowers, offering visitors a vision of amazing banquets. “My still lifes are definitely alive,” the artist points out with amusement: “they are only pretending to be still!” For some, this workaholic has used old canvases on which he has painted new shapes, revealing older traces through a subtle play on superimposition. Executed quickly, these pieces, which he nonetheless reworks several times, are highly constructed and full of references. For this erudite artist (who graduated from the School of Decorative Arts in Palma de Mallorca at 16) is passionately interested in poetry, literature and art history, which can be divined in his works. Here, Italian Renaissance master Francesco Napoletano makes an appearance between a donkey skull and a shrimp. Elsewhere, fish echo the ones he admired in Velasquez’s Christ in the House of Martha and Mary. “I also like my paintings to spawn ideas that I can divert, so that something unexpected comes out of it.” Some of his dense canvases, where “the material predestines and pre-delineates the figure,” sport a vibrant chromaticism. “For me, black and white is the pure thought embodied by drawing: the latter should not come after the thought, but before it. Whereas with color, what I transcribe in my paintings is the instant moment, the pleasure of it.”

In the Beginning Was the Cave
Here and there on the walls, handprints, faces and almost erased familiar bodies bear witness to his love of cave art. Leading to the upper floor, a ramp and a section of wall coated with plaster accentuate the impression: “This part of my studio can be seen as a preparatory study for my monumental ceramic project for the Sant Pere Chapel in the Cathedral of Palma de Mallorca between 2001 and 2006. For me, my works are often like caves, because they are never flat.” He’s said it: the decorated cave is another basic aspect of his body of work, inspiring his explorations of material and representation. “I love cave paintings like the ones in the Himalayan caves. I’m familiar with the ones in France, Italy and Spain and have seen the ones in Tibesti, in Chad. The Chauvet Cave is the greatest artistic discovery of this millennium! Its embellishments disrupt our vision of art and our relationship to time.” A reference that can also be seen in the gigantic ceiling decoration of room XX in the Palais des Nations in Geneva (2007-2008), where stalactites of colors seem to emerge from a dreamlike lunar world.

In a corner, on the floor, a small still life of fruit in grisaille evokes those of Cézanne. Elsewhere, a photo of the artist when younger is pinned above a portrait of Rembrandt. Inspired by cave art, but also by numerous inspirational figures (including Zurbarán, Goya and Miró for color, and Picasso and Jackson Pollock for the lyrical gesture and the struggle with the material), Barceló’s style reveals itself as syncretic, while profoundly unique. Highly regarded and celebrated, this performer, sculptor, ceramist, stage designer and figurative artist “whose images come from nothing” maintains a sensual, primary, even elemental relationship with painting. And his studio, like a three-dimensional self-portrait full of life, illustrates this speakingly.

"Francis Bacon: Man and Beast" at Royal Academy in London

When Édouard Manet Loved Dogs...
Not to be missed
Artist Studio