Mexico Has its Idols

Mexico is making a bid to dominate this impressive Pre-Columbian art catalogue involving several private collections, including the miniatures of Régine and Guy Dulon. The State of Guerrero tops the estimates with the €100,000/120,000 expected for a late pre-Classic standing figure from this area. It is a fine illustration... 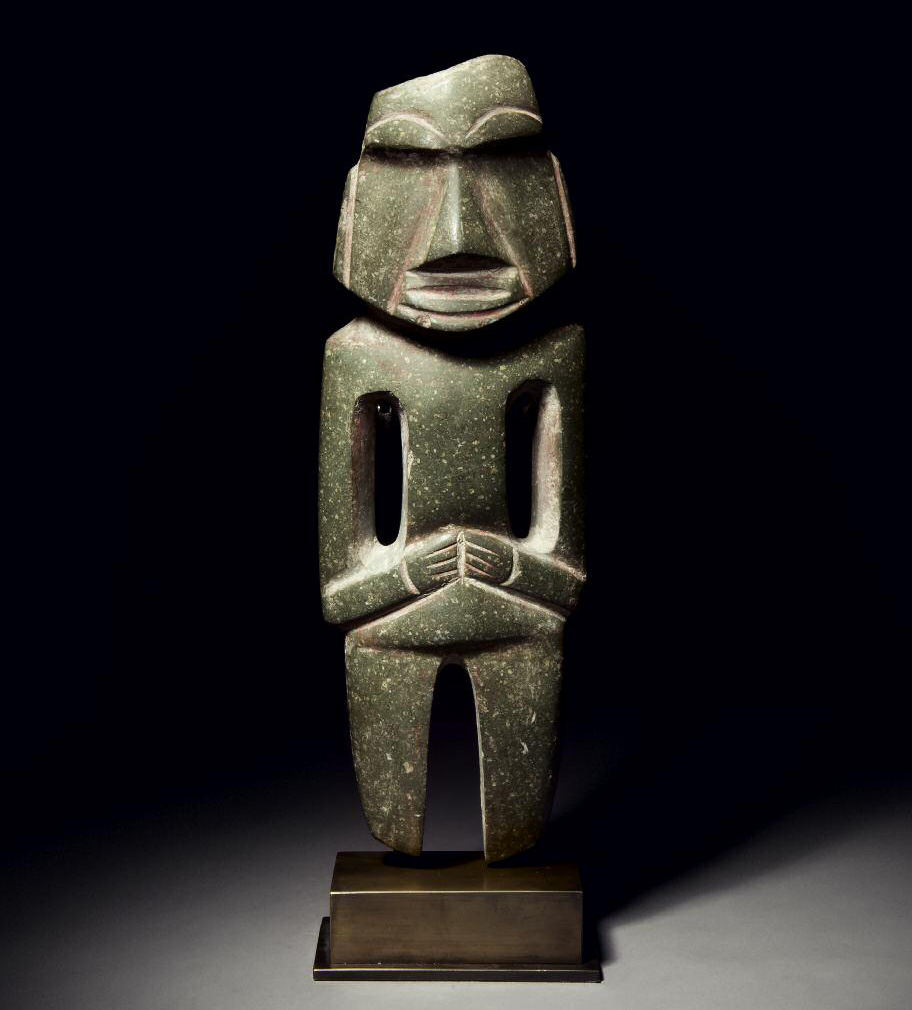 Mexico is making a bid to dominate this impressive Pre-Columbian art catalogue involving several private collections, including the miniatures of Régine and Guy Dulon. The State of Guerrero tops the estimates with the €100,000/120,000 expected for a late pre-Classic standing figure from this area. It is a fine illustration of the Mezcala culture's admirable lapidary tradition (much in the news since the sale of the Gérard Geiger collection), where the "Cycladic" physique is greatly in evidence. In 1948, Miguel Covarrubias gave a name to this style, which he was the first to define and classify into five main groups. This category, first called "local" and then simply "Mezcala", is characterised by asexual, anthropomorphic and highly stylised representations where the features are rendered with obliques and relief in the material. Art historian Carlo Gay carried out further work on dating these objects in the late 1970s, but the culture – which comes from a fairly inaccessible region – has not yet revealed all its mysteries. This piece stands out for its hands in light relief, crossed over its belly, with delicately incised fingers. The top of the skull was probably left unfinished for ritual reasons. It has the timeless beauty, very similar in terms of attitude and size (30 cm, making it one of the largest of its genre) of another Mezcala sculpture sold for €264,500 at Drouot on 20 March by the same auction house. The quasi-twin boasted an outstanding New York provenance, while this one belonged to Fred Feinsilber, a French collector of antique books and engravings – we remember the sale of his library at Sotheby's in 2006 – who began to focus on ethnic art in 1999. However, though announced as the star, this piece will undoubtedly be competing with compatriots from the west coast – like a ceramic seated wrestler in perfect condition from the Jalisco culture (€90 000/120,000) and a hardstone amphibian yoke (€40,000/50,000) belonging to the later Veracruz culture – and from other geographical regions. For example, Peru is proffering two impressive funerary masks: one in gold, silver, copper and turquoise (Lambayeque culture; around €25,000), the other in polychrome ceramic (Paracas culture; around €25,000). Meanwhile, Guatemala proposes a less friendly-looking representative in the shape of an old man from the Mayan culture, whose head in profile sports an expression as hard as the granite it is made of (around €25,000). A hacha that will need a gutsy bidder.