Mary Cassatt was not only a great artist, but also played a crucial role in the Franco-American dialogue and the promotion of French art across the Atlantic. 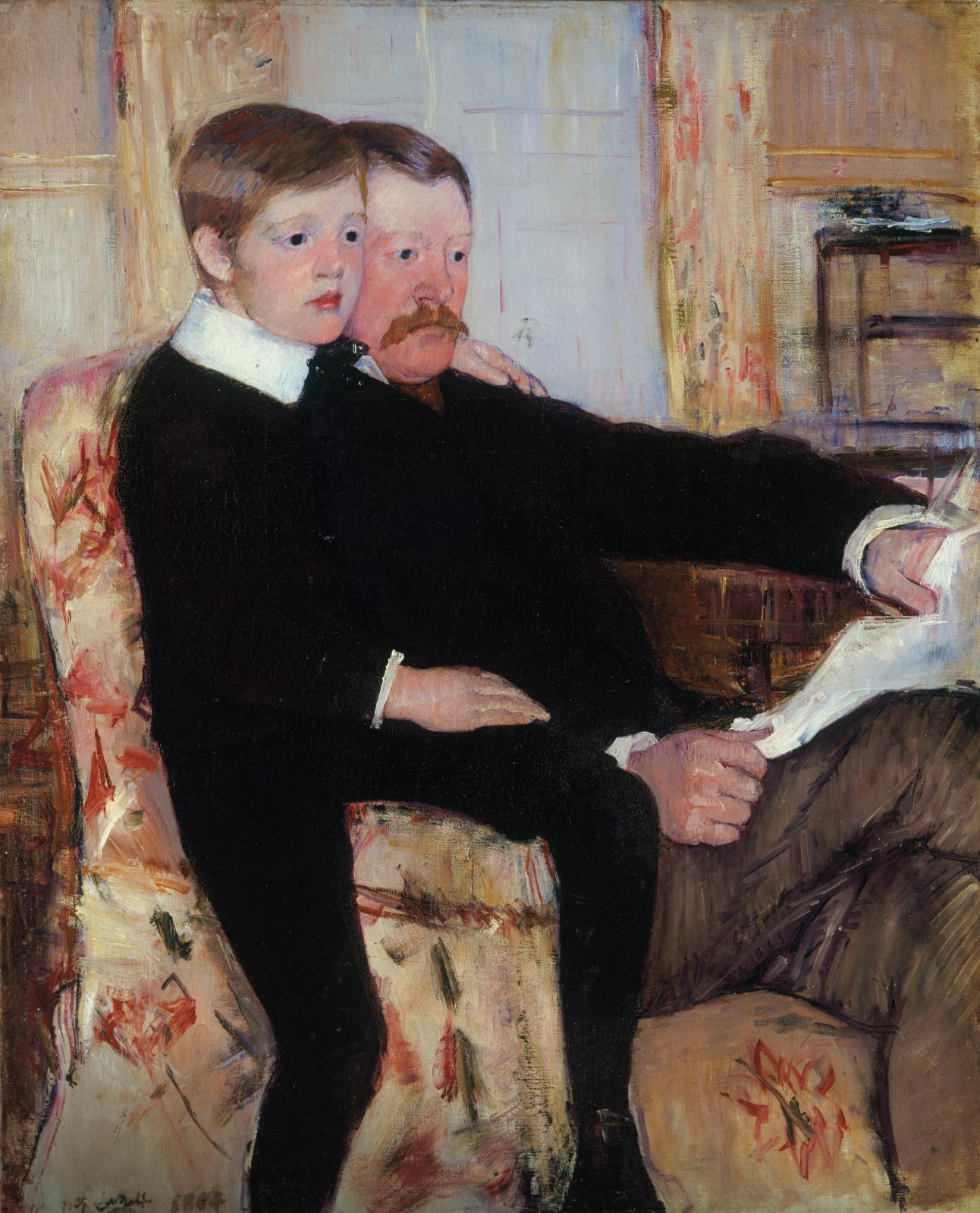 Though seeing and describing herself as fundamentally American, Cassatt spent most of her life in France. After arriving in Paris as an art student at 21, she remained in the capital – or the Château de Beaufresne in the Oise, which she bought in 1894 – to the end of her days, only returning to America for fairly brief trips. The main reason for this undoubtedly lay in her desire to devote herself to modern painting.

From Allegheny City to Paris
Mary Cassatt was born in 1844 to a rich family in Allegheny City (annexed to Pittsburgh 63 years later). Through her father, she was a descendant of French Huguenots who emigrated to first Holland, then America. Her parents, Robert Simpson Cassatt and Katherine Kelso, were respectively the founder of an investment company and the daughter of the chairman of the Bank of Pittsburgh. The young Cassatt attended the Academy of Fine Arts in Philadelphia, but decided to continue her training in Paris, where she studied with several masters including Jean-Léon Gérôme and Charles Chaplin. Though the capital was home to a large colony of American artists at the time, she was the only one to take an interest in the new style of painting, soon to be described as "Impressionist". And although she was already exhibiting at the Salon – where her works, imbued with the influence of Thomas Couture and Courbet, made an honourable showing –, she boldly jeopardised this promising start by joining the group of "independents". Her meeting with Degas in 1877 was decisive. She was profoundly marked by the art of the French master, whom she admired enormously, and who helped her through his support and friendship – which had a mean side to it, it is true, but was unfailing. He introduced her to the Impressionist group, and she threw herself into the great adventure, taking part in their exhibitions of 1879, 1880, 1881 and 1886. She met their dealer, Paul Durand-Ruel, who took her on as well. In 1881, he began to buy her works regularly: 400 in all. He defended and promoted her work in France and America alike, and she helped him in his strategy for disseminating Parisian painting across the Atlantic – first of all by introducing him to her circle.

Promoting French Painting
Cassatt's family was full of worthies: she was related to Colonel Thomas Scott, president of the Pennsylvania Railroad, and one of her own brothers, Alexander, occupied this position in 1899. The artist was thus well-known in American high society and had connections with its wealthiest art lovers, giving them advice and encouraging them to buy works by not only the "1830 painters" (the Barbizon artists who included Corot, Rousseau, Millet and Courbet, highly popular with Americans) but also the Impressionists, starting with Degas. In 1877, she got her great friend Louisine Elder – the future Mrs Havemeyer – to buy his "Répétition de ballet", a pastel soon lent to a New York exhibition. Likewise, she persuaded her brother Alexander to start a collection of Impressionist paintings, mainly by Degas and Monet. All these works were among the first by the group to be shown in the US. For the artist, this was not so much a commercial strategy (carried out in tandem with Durand-Ruel) as a mission that truly fired her: helping to provide her country with a first-rate artistic heritage. "All the pictures privately bought by rich Americans will eventually find their way into public collections and enrich the nation and the national taste," she wrote. And this was precisely the path taken by major collectors like the banker James Stillman and Louisine Havemeyer, who donated works to the New York Metropolitan Museum; the industrialist William T. Walters, founder of the Walters Art Museum in Baltimore; the architect and diplomat's wife Theodate Pope Riddle, who designed the Hill-Stead Museum in Farmington, and the Chicago property developer Potter Palmer (husband of her friend Bertha Honoré), who thanks to Cassatt built up an extraordinary collection of Impressionist paintings, now in the Art Institute.

Transatlantic Success
Cassatt's influence with these major figures was all the more pronounced in that she was a famous artist in her own country. When the print dealer Samuel Avery exhibited a large number of her pieces in Boston and New York in 1887, the press acclaimed her as the greatest female engraver of her times. In 1893, she was commissioned to produce a huge mural (now lost) based on the modern woman for the Women's Pavilion at the Chicago World's Fair. This illustrated another facet of her personality: her commitment to women's rights and suffrage. A figure with a very high media profile, she was finally hailed by her circle in 1905 as "the most important woman artist in the world"! In 1888, Paul Durand-Ruel opened a gallery in New York, and started up a weekly journal, "L’Art dans les deux mondes". Cassatt was given considerable coverage in the first issue. He laid on no fewer than 25 exhibitions of her work there, selling her pieces with great success: 26 to James Stillman, ten to Harris Whittemore (son of the steel magnate, who had been introduced to him by the artist), and several to Henry Osborne Havemeyer, the sugar king, who bought a spanking total of 150 Impressionist paintings from the Paris dealer. Nor did Durand-Ruel restrict himself to New Yok: with his three sons, he staged genuine exhibition campaigns in Pittsburgh, Philadelphia, Omaha, Boston, Cincinnati, Worcester and other cities. When we consider that Durand-Ruel and his ally Cassatt battled to get Americans to buy not only modern masterpieces but Old Masters as well (like El Greco's celebrated "View of Toledo", now in the Metropolitan), we can appreciate the extent of their action and its cultural consequences for a country still in its youth at the turn of the 20th century.

Earth and Peace: Georgia O'Keeffe in Paris
Not to be missed
Analyses