Light on the Secular Decoration of the Château d'Anet, Diane de Poitiers' Fief in Eure-et-Loir

A series of recent studies have identified the creators of two aspects of major decorative works dedicated to the story of Diane de Poitiers: the hangings and the secular stained-glass work on the first floor in the château of Henri II's mistress. 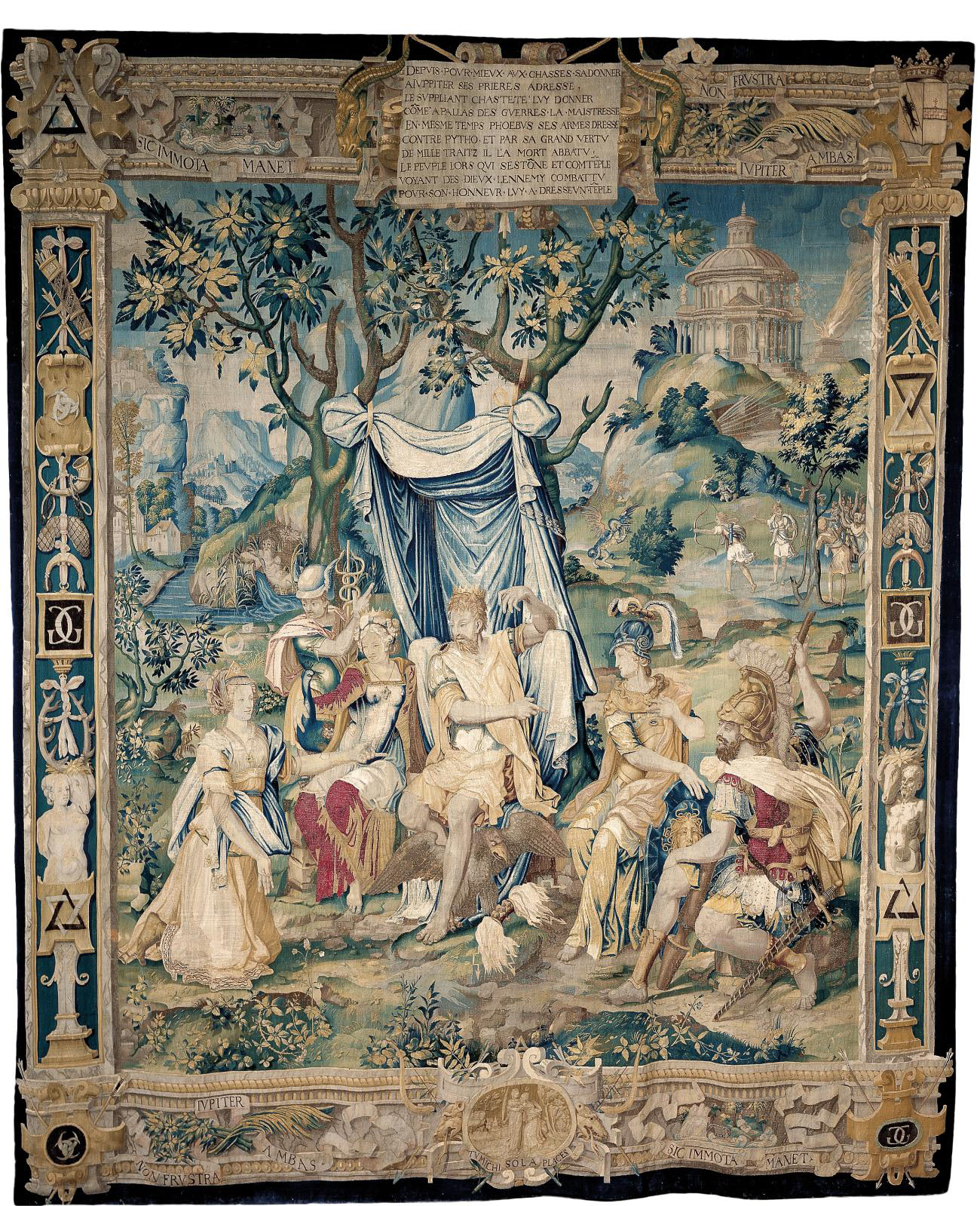 Designed for the Château d'Anet, probably at the request of the young king Henri II and very likely in 1547, the hangings illustrating "The Story of Diana" are one of the most outstanding sets of 16th-century French tapestries. Diane de Poitiers (1500-1566) is the main character. "The borders feature her initials, arms and mottos and, above all, she is objectively portrayed. Her features are easily recognizable in La Chasteté de Diane (Diana's Chastity) and La Mort de Britomartis (The Drowning of Britomartis): the goddess's face closely resembles the mistress', as seen in portraits now in the Musée Condé in Chantilly," says Dominique Cordellier. The curator at the Louvre Museum, along with art historians Cécile Scailliérez and Luisa Capodieci, French Renaissance literature specialist Paul-Victor Desarbres and stained glass expert Françoise Gatouillat, have written a fascinating investigation into the creators of the tapestries and glasswork in the hall and bedroom on the first floor of the Château d'Anet (Eure-et-Loir). They challenged a great many identifications and interpretations, which resulted in a clearer understanding of a sophisticated iconographic program and have provided convincing attributions to the artists Charles Carmoy, Primaticcio and Jacques de Vintimille.

In the sources, there is no mention of the designers, draftsmen and weavers of the ten known tapestries—of which two were rediscovered and bought in 2007 by the Musée National de la Renaissance in Écouen, three are now in the United States, one is considered lost, and four were destroyed in a fire in 1997. Although Antoine Caron, Jean Cousin le Père, Étienne Delaune, Luca Penni and even Philibert de l'Orme were credited in turn with the creation of the cartoons, Cécile Scailliérez and Dominique Cordellier provide decisive proof that they were in fact by Charles Carmoy: an artist now virtually forgotten, but famous in his time. Carmoy was one of the best-paid collaborators of Rosso Fiorentino and Primaticcio on the royal building sites, and was mentioned by François Rabelais, unlike his Italian colleagues. Brother of the sculptor François Carmoy, originally from Orléans, he was employed at Fontainebleau from 1537 to 1541, then in Paris in 1548 by Cardinal du Bellay. In 1549, he was commissioned to produce paintings for the Vincennes chapel keystones by Philibert de l'Orme, before being appointed painter to Diane de Poitiers in 1550-1551. Dominique Cordellier now attributes to him the large cartoons of the "History of Diana" hangings, a series of three drawings devoted to the antique goddess (one is now in the Louvre Museum; the other two are in the Rennes Musée des Beaux-arts), the models for a series of prints on the same theme by Étienne Delaune, and a group of drawings and a series of engravings of Horapollon's Hieroglyphics.

Primaticcio in Charge of the Story
Dominique Cordellier's research into Primaticcio and his possible collaborations with Philibert de l'Orme has pinpointed the crucial role played by the Bolognese artist in the design of the secular stained glass in Anet. "Over the past 15 years, the Château d'Anet has provided a rare opportunity to study 16th-century civil stained-glass. This is despite the fact that nothing remains in situ of the stained-glass windows from Diane de Poitiers' time except some small fragments, most of which were reassembled between 1860 and 1875—not in their original location, but in the library window on the ground floor of the left wing." In grisaille, some were painted with white enamel, applied on the outside, by the glassmaker and painter Nicolas Beaurain. He is mentioned in the contract signed on January 10, 1548, in Philibert de l'Orme's presence for "all the first-floor windows". In the first volume of L'Architecture, de l'Orme specifies that the stained-glass windows of the "chasteau d'Annet [...] were the first using white enamel seen in France."

The 1548 contract does not specify any names for the models and "estimates". The lengthy research work involved a meticulous examination of the full-size patterns for the stained-glass windows and their comparison with fragments of glass, a huge number of Mannerist drawings as well as various historical and documentary leads, which enabled Dominique Cordellier to recognize Primaticcio as the formal designer and overseer of the window, with assistance from another painter, whom he identified as Charles Carmoy. To the former, he attributes two patterns—Hippolytus accused by Phaedra Before Theseus (Louvre) and Apollo and Mercury Enamored of Chiona (the Hermitage, St Petersburg)—thanks to a perfectly identical detail on a fragment of stained glass, as well as "twenty-five sections identified with certainty, listed in the order of reconstruction of the various casement windows of the king's apartment in the château's left wing, starting with those in the hall, of which there were six, each of which must have contained four subjects," says the Louvre curator. He bases this on the iconography, style, technique (extremely translucent ink and wash), dimensions, subject indications, numbering in a series and/or the name of the master glassmaker, like Jean Allardin.

Cordellier attributes to Charles Carmoy some sections in the Croisée de Daphné (Casement Window of Daphne), with their stiff, derivative style. The painter from Orléans transcribed the full-size stained-glass window patterns from Primaticcio's small patterns, not yet found. "In the stained-glass windows at Anet, the presence of Diana [...] was central, and the episodes from the Diana myth illustrated there, sometimes famous, sometimes lesser-known, were very different from the ones chosen on the same theme by Jacques de Vintimille for the hangings, for the same château. [...] Designed by Primaticcio and Carmoy, painters who successfully combined their talents, the two series—one in grisaille, the other in full color —, far from repeating each other (apart from the massacre of Niobe's children), seem to complement each other.

Jacques de Vintimille: Poet of the Inscriptions
Jacques de Vintimille is the third artist whom Paul-Victor Desarbres' research has rescued from oblivion. The name of the scholar who "devised" the tapestries— meaning that he "decided on the iconographic program and composed the rhyming ten-line poems in French of his cartouches, and the secondary maxims in Latin"—is here "incontestably identified". Desarbres also demonstrates that this poet at the court of Henri II, before becoming counselor to the Burgundy parliament in 1549, wrote the quatrains and mottos in the civil windows on the first floor as well.

"While in the mythological stories drawn by Primaticcio and Charles Carmoy the goddess appears sometimes as a lunar benefactor and sometimes as a capricious punisher, in the surrounds, the duchess appears in an allusive, enigmatic way," with a wealth of colors, figures, deltas and emblems, says Luisa Capodieci, who provides a scholarly reading of the tapestry borders and the stained-glass windows. "In these glasswork fables dominated by the two luminaries [the Sun and the Moon], a new presence makes an appearance: Catherine de' Medici": the King's wife. Nevertheless, "linked by the tapestry threads and joined by fire in the stained-glass windows," Diana and her royal Phoebus crossed over the threshold of history, entering the eternal dimension of myth as protagonists in connecting the celestial and terrestrial worlds.

Oriane Beaufils: Anchoring the Château de Fontainebleau in Modernity
Not to be missed
Cultural Heritage