Les Invalides: A Temple for Souls and Bodies

The Hôtel des Invalides was founded in Paris three hundred and fifty years ago. We look back at the history of a unique architectural complex. 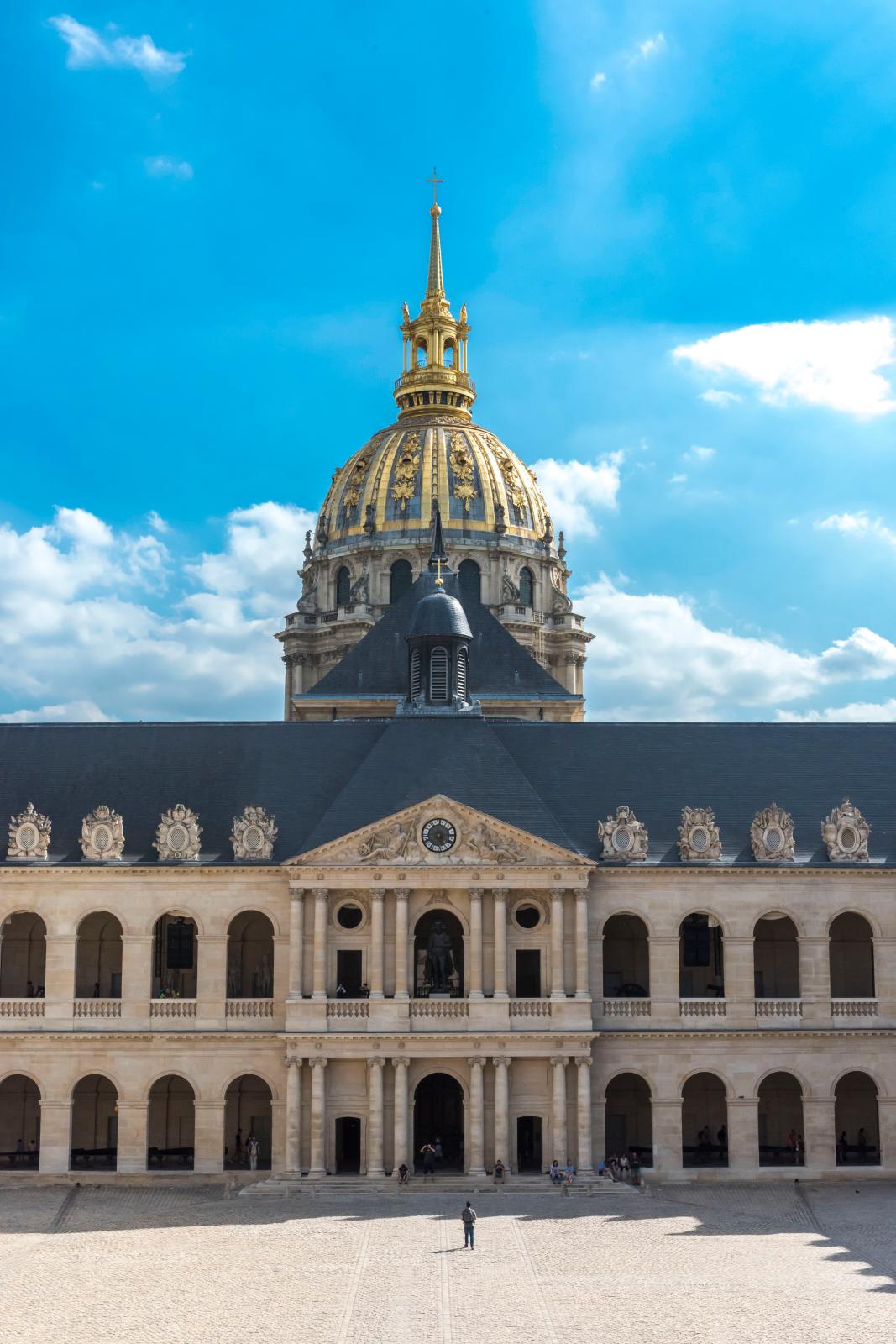 In the 17th century, Paris was full of demobilised wounded soldiers without resources, who hung around the streets and increased insecurity in the city. At that time, there was nowhere to house them. Through the order of February 1670, King Louis XIV decided to build a place to receive all the officers and soldiers, "both crippled and old", who had served France worthily. Three and a half centuries after the Sun King's founding act, the Hôtel des Invalides is celebrating the event throughout 2020. To accommodate the new building, Louis XIV bought a plot of land on the banks of the Seine near Paris, and entrusted the Marquis de Louvois with the project. Work began in 1671 with the construction of the plain, monumental north facade: a fine illustration of French classical style in the early part of Louis XIV's reign. Behind it, a porch led to a large central courtyard (about 100 x 64 metres), whose soberly decorated buildings were arranged around a quadrangle, similar to the layout of convents. In this monastic atmosphere, the soldiers attended reviews, parades and salutes to the emblems in a highly regulated manner, but they were also supposed to pray and reflect on their own salvation.

Completion in Barely Three Years
In October 1674, the building was ready to take in its first residents, most of whom were survivors of the Thirty Years' War. They were accommodated in rooms on the first floor overlooking the paved main courtyard, and ate in four large refectories with murals illustrating Louis XIV's great battles. The comfort and hygiene provided to the wounded soldiers - especially access to running water – was a stark contrast with the prevailing insalubrity in the city. In the spring of 1676, the young architect Jules Hardouin-Mansart's project was judged "very fine". Its royal chapel, consisting of a single nave surmounted by a dome, was inaugurated by Louis XIV in 1706. In 1715, at the end of his life, the king considered the building the most useful of his reign, because "it is only fair that soldiers, unable to work because of their long service and their age [...], should enjoy an honourable retirement."

Hospital, Museum and Necropolis
From the outset, the building was far more than a hospital: there was a hospice, a barracks, a convent and even a manufacturing centre for a time, which produced shoes, tapestries and illuminated books. It was not spared by the French Revolution: on 14 July 1789, an angry mob broke in and stole guns and cannons to storm the Bastille. Under the Consulate and the Empire, Les Invalides enjoyed the protection of Napoleon I. When King Louis-Philippe organised the return of the Emperor's body in 1840, its role as a military necropolis was finally established. In 1862, an imposing red quartzite tomb designed by the architect Louis Visconti was built under the dome to house the ashes of Napoleon I, contained in six coffins fitting into one another: the first in tin, the second in mahogany, the third and fourth in lead, the fifth in ebony and the sixth in oak. The building was designed for 2,000 soldiers, but sometimes accommodated up to 6,000. After the 1870 war, however, it became less important as a hospital and more prominent in terms of heritage. The governor of the Invalides then decided to create a museum, which became the Army Museum in 1905. In the late 19th century, the building housed the senior military authorities.

Restoration Campaigns
At the end of the First World War, the infirmary received a new influx of seriously wounded soldiers. The building became a venue for patriotic events and numerous ceremonies, and the situation continued during the inter-war period when the remains of the top military leaders were laid in the governors' vault. In 1967, the Museum of the Order of the Liberation was created. Major campaigns to restore the monument were undertaken in the late 20th century, when the main courtyard was refurbished and the dome was gilded. Entirely renovated in 2010, the Army Museum now takes up the areas formerly occupied by the soldiers. Covering nearly 30,000 m2, it contains one of the world's richest collections of military history.

Exceptional Collections
Since the founding of the complex, the Institution Nationale des Invalides has maintained its original purpose as a hospital and care home, but its initial mission has changed over the centuries with the arrival of a public no longer limited to soldiers. A military hospital and necropolis, the site is also a place for the nation to honour those who have died in service, victims of terrorist attacks or major figures who have died. Today, General Alexandre d'Andoque de Sériège, director of the Army Museum, celebrates the admirable alliance between a masterpiece of classical architecture and some remarkable collections.