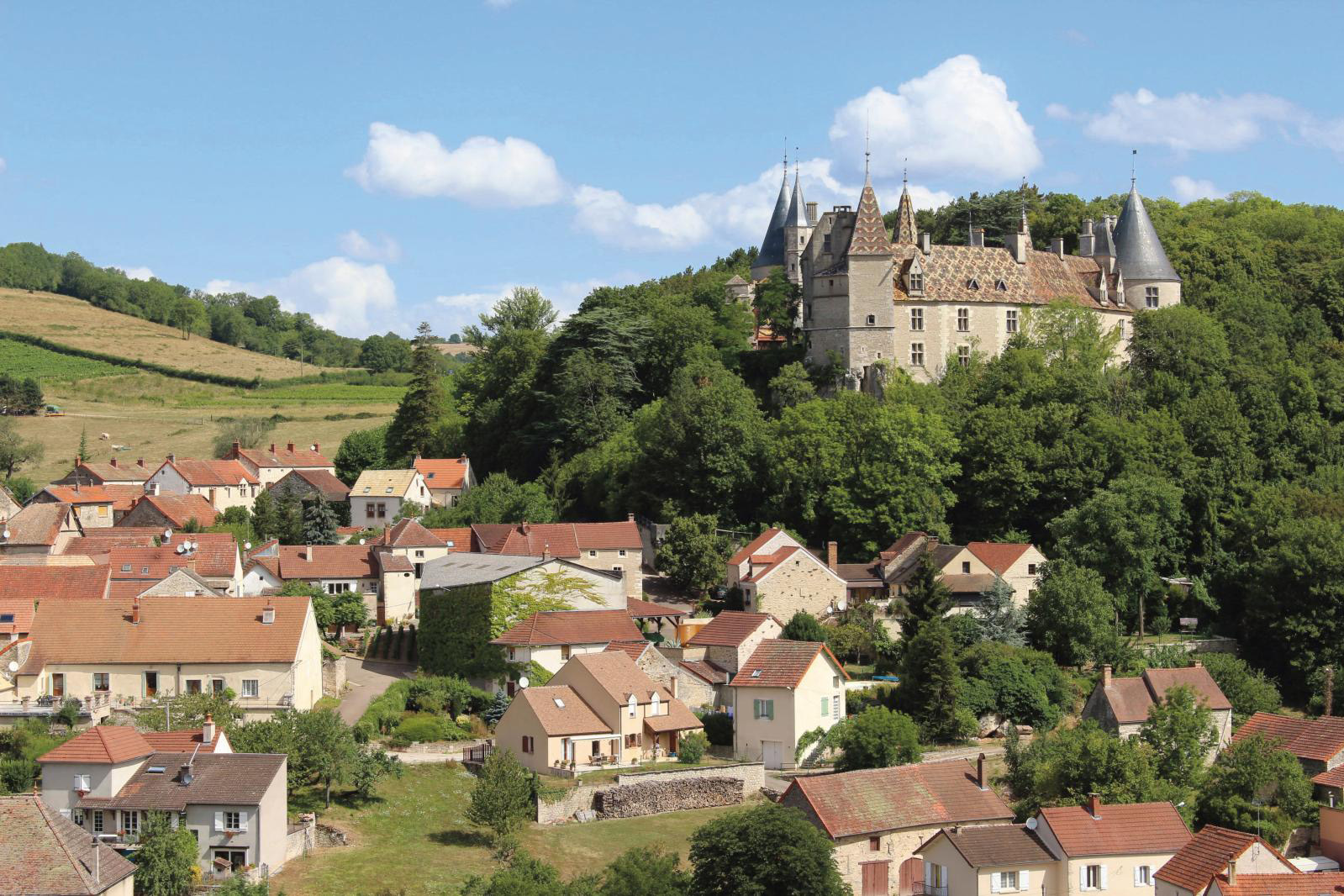 The main building of La Rochepot Castle, overlooking the village

The main building of La Rochepot Castle, overlooking the village

Vineyards are nearby and cows graze the surrounding pastures. The village stands in the shadow of its proud sentinel perched on a craggy site watching for the return of traditionally numerous visitors starting at Easter and culminating with the Hospices de Beaune wine auction on the third Sunday of November. That changed on October 5, 2018: tipped off by Europol, gendarmes arrested the owner under suspicion of corruption and money laundering. Wanted in his home country of Ukraine, he thought he could escape justice by taking refuge in this historical site. Since then, La Rochepot has been under lock and key, sinking into a deep state of sleep. It will take much more than a kiss to awaken the deteriorating castle and restore its glory.

La Rochepot has witnessed a succession of Dukes of Burgundy, a cardinal, a Revolution, a president’s wife and a colonel. In the 14th century, Burgundy was a prosperous duchy ruled by powerful allies from Flanders. A building defending "the tin road" between the Seine and the Saône rivers stands on the site, which has been occupied since Gallo-Roman times. After returning from the crusades, Régnier Pot (c.1362-1432), a knight, adviser to the Duke of Burgundy and chamberlain to the King of France, bought the property, added fortifications, completed the tower and gave the castle its name. But the site really owes its early splendor to his grandson, Philippe (1428-1493). When Charles the Bold died in 1477, the great seneschal of Burgundy, whose tomb flanked by mourners is now the pride of the Louvre's sculpture department, sided with the French king. He became Louis XI’s advisor and won fame for his oratorical skills.

Deemed "the most accomplished knight of his time," Philippe transformed the castle. He built the entrance fortifications with false braies (thick low walls), defenses to protect the curtain wall, an impressive barbican between the drawbridges and the main building in the enclosure. He also had the chapel restored and made taller, and the Beaune, Marlot and Colombier towers built. Yet Philippe died without descendants. Climbing up a complicated family tree, the nearest heir was found to be Anne de Montmorency (1493-1567). Later, Cardinal de Retz (1613-1679) owned the property for a very short time: riddled with debts, he had to sell it at auction. Then a string of owners bought, sold, improved and updated La Rochepot until the French Revolution, when its heartbeat stopped. The proud symbol of feudalism was vandalized and plundered for building materials. The noble edifice laid dormant for the first time.

A Skyline Is Reborn
By 1810, all that remained of La Rochepot were the main building’s façade, the Beaune Tower and parts of the Marlot and Colombier Towers. Surprisingly, this is when the castle attracted interest. The Romantic era was dawning, and with it the idealization of a glorious medieval past. Passing through on his way to Switzerland in 1830, Alexandre Dumas described La Rochepot as "nothing but ruins, sadness and solitude". Three years earlier, an odd traveler had stopped under its arches: Charles X's famous giraffe, a gift from the Ottoman Viceroy of Egypt, Muhammad Ali to the French king, which walked to Paris from Marseilles in 1827.

During the first half of the 19th century, passionate amateur archeologists founded local learned societies. Renovation projects were drawn up but due to a lack of funds did not come to fruition until 1893, when President Sadi Carnot's wife, whose family hailed from a neighboring village, gave the property as a gift to their 28-year-old eldest son, Captain Lazare-Hippolyte-Sadi Carnot (1865-1948), an army officer and future colonel interested in local history, especially the golden age of the Duchy of Burgundy. In 1897 he asked Charles Suisse, head architect of French National Historic Monuments in Dijon and the region of Savoy, to carry out a painstaking, nearly 10-year restoration. The family archives show that he made 92 trips to Le Rochepot and wrote countless letters informing the owner about the colossal project’s progression.

The outcome was a veritable resurrection based on drawings of similar medieval buildings in the area. The castle’s skyline was restored to its original appearance and the 236.2 foot/72-meter-deep well cleared. The towers were shored up and roofed, the gatehouse, barbican, chapel, west curtain wall and stables reconstructed. Lastly, the main building was brought back to life. Many architectural and decorative features were found in the rubble, others carved on site. The owner and the architect’s shared romantic vision of the Middle Ages guided the work: Suisse designed the roof ornaments, gargoyles, enameled floor tiles, fireplaces and murals. In the 1920s, the edifice regained its original character, both castle and pleasure residence. On April 1, 1961, Pierre Sadi Carnot, the colonel’s son, opened the proud building up to the public. Visitors would walk through the gatehouse before entering the courtyard to explore historically accurate restorations and 21st-century improvements. Until 2018, La Rochepot was one of Burgundy’s most popular landmarks, drawing over 25,000 visitors a year.

An Uncertain Future
Long ago, the danger came from the East: Visigoths, Burgundians, etc. In the 21st century, who could have imagined that it would come from a Ukrainian arms trafficker passing himself off as the manager of a Luxembourg investors’ group? This is the man to whom Sylvie Carnot, Pierre Sadi’s daughter, sold the property in 2015. Locked up, neither maintained nor heated, the castle became rundown. The ongoing criminal investigation has uncovered a tangled international web of embezzlement, a faked death, pro-Russian separatism and organized crime. Appeals slowed everything down and Covid further complicated matters, which are at a standstill. An auction of unlisted furniture, and perhaps of the building itself, is under consideration. Acquisition by the department or region would be welcome, but the most important thing is that the future owner reopen the site to the public so that its stones can tell its long story.