Founded during the Bourbon Restoration in France, L’Escalier de Cristal (The Crystal Staircase) made and sold furniture and luxury items. A landmark book about the famous firm is bound to become a reference in the history of the decorative arts. 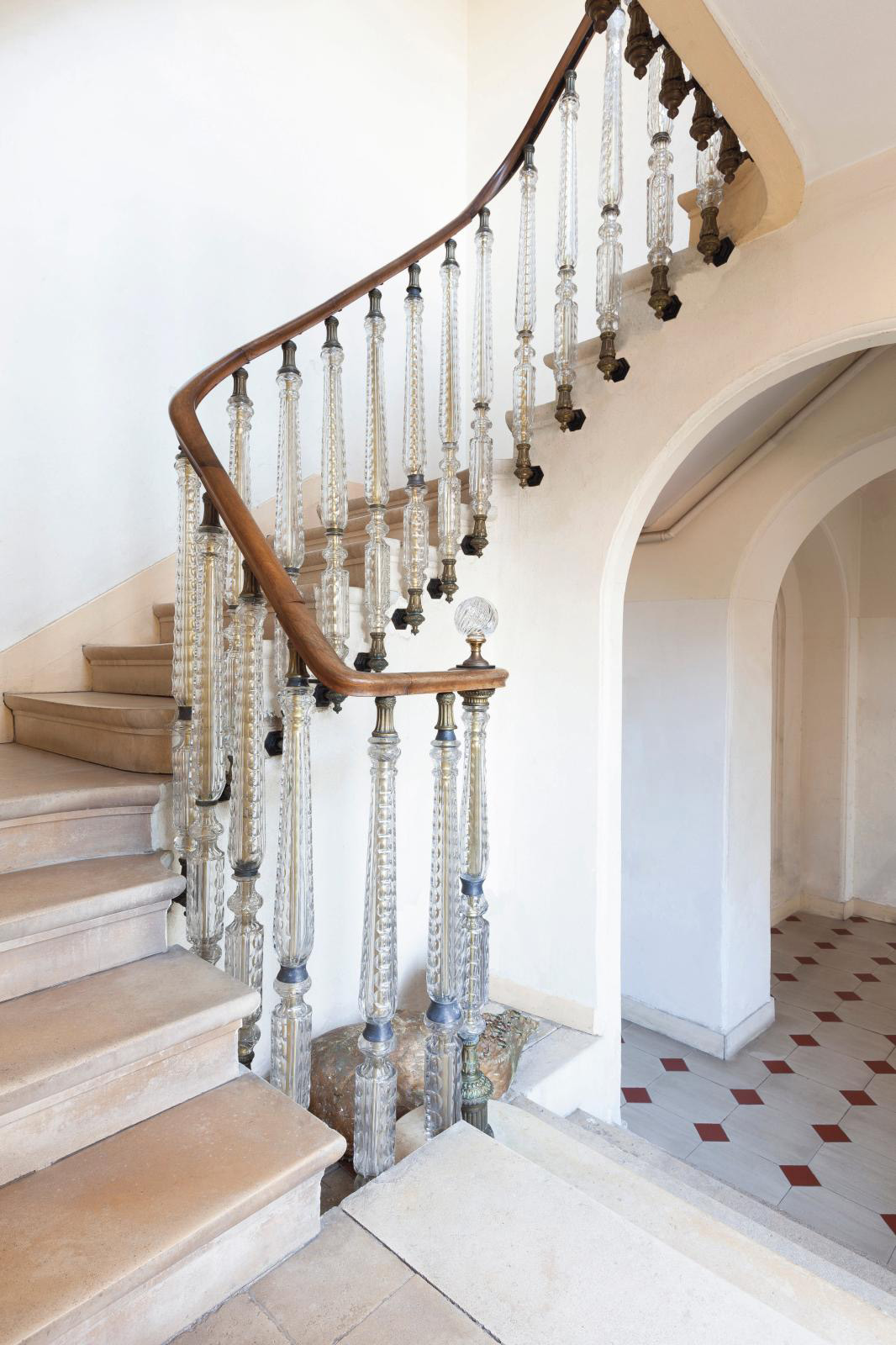 The name appeared in sales catalogs in the late 1960s, first in France, then abroad. In the next two decades, works bearing the "Escalier de Cristal" mark appeared increasingly often, especially at Art Nouveau sales. Many pieces are associated with Émile Gallé (1846-1904), another famous name whose prices took off in the 1970s and 1980s. Others—decorative objects and tableware—exemplify Japanese-style ceramics.

The company displayed its name on its products in different ways. “Escalier de Cristal” was etched on glass or bronze frames and bases, stenciled in paint and printed on ceramic. Its name and address also appeared on variably sized round or rectangular labels, which were not always used for commercial purposes. Sometimes they were affixed to hide the maker’s name, whether an artist or another workshop. One example is a large ornamental faience dish by Gallé, which the Musée d'Orsay acquired at Christie's Geneva in 1982.

In the late 1980s, as evidence of the degree of perfection achieved by its pieces increased—one of the most spectacular was a Louis Comfort Tiffany vase displayed at the 1900 Paris Universal Exhibition alongside the no less impressive La Nuit (The Night) vase, acquired from Sir Valentine Robert Duff Abdy by the Musée d'Orsay in 1980—Escalier de Cristal furniture appeared at auctions. Their outstanding craftsmanship prompted Denise Ledoux-Lebard to include the company in her 1989 reference work Le Mobilier français du XIXe siècle. 1795-1889. Dictionnaire des ébénistes et des menuisiers (French Furniture of the 19th Century. 1795 to 1889. Dictionary of Cabinetmakers and Joiners) (published by Éditions de l'Amateur). Marked "Escalier de Cristal Paris" with an iron stamp, most of the pieces are either accurate copies in the Louis XV, Louis XVI and Empire styles or “modern” adaptations of them.

Triumph at the “Exposition des produits de l'industrie” (“Exhibition of Products of Industry”)
Japanese-inspired pieces popular with the company’s most prestigious customers were scarce on the art market at the time. They, and the ties with Gallé (editor’s note: to which Philippe Thiébaut devoted a 1985 exhibition at the Musée du Luxembourg) as well as the impact of the famous “Rousseau” service (the focus of an exhibition-dossier at the Musée d'Orsay three years later) on the “Grands oiseaux” (“Large Birds”) by the Escalier de Cristal, prompted me to delve more deeply into the matter. Research led to the publication in 1989 of an article, “Contribution à une histoire du mobilier japonisant : les créations de l'Escalier de Cristal”, (“Contribution to a History of Japanese Furniture: The Creations of L'Escalier de Cristal”) in Revue de l'art (no. 85, pages 76-83).

This study, even if it retraced the history of the store, only took into consideration the period that began in 1872, when the shop moved from the Palais-Royal to the opera district at 6 rue Scribe and 1 rue Auber, the jewel of Haussmannian urbanism. The decision was made by Émile Augustin Pannier (1828-1892), whose intuition was hailed in the December 7, 1872 issue of L'Illustration: “The owners of the magnificent, world-famous Escalier de Cristal stores left the old palace and the gallery where they had reigned for so long to establish themselves in the very heart of the new, elegant, lively Paris, just a stone's throw from Garnier's splendid monument” (editor’s note: the Opera Garnier).

In 1813, Mme. Désarnaud (born Marie-Jeanne-Rosalie Charpentier in 1775) re-used the famous staircase’s crystal balusters at her store at 163 galerie de Valois, perpetuating the memory of a company whose exact name was “À l'escalier de cristal” in the early 19th century. Two years after it closed, the staircase was dismounted again and reassembled at a house in Croissy-sur-Seine owned by the Assistance Publique-Hôpitaux de Paris.

L'Escalier de Cristal triumphed at the 1819 “Exposition des produits de l'industrie” (“Exhibition of Products of Industry”), where it won a gold medal. The stars of the show were assuredly the pieces of furniture now displayed in the Louvre: a crystal, verre églomisé and gilded bronze table and armchair commissioned by the queen of Spain but acquired after her death by the Duchesse de Berry, who was already one of Mme. Désarnaud’s customers. Anne Dion-Tenenbaum’s study of this masterpiece, which was published in the catalog of the October-November 1991 Grand Palais exhibition (“Un âge d'or des arts décoratifs. 1814-1848”, “A Golden Age of Decorative Arts, 1814-1848"), definitively shed light on the company’s beginnings.

Fruitful Family Alliances
Annick and Didier Masseau’s lavish book covers the entire history of L'Escalier de Cristal from its founding in 1809 to its closing in 1923. The well-researched and documented text answers many questions collectors and dealers might have about an output that is highly diverse both typologically and technically. The 18th-century specialist and historian Professor Didier Masseau mined the family archives in his possession. Indeed, he is the great-great-grandson of Émile Pannier, who understood that if L’Escalier du Cristal was to shine as brightly as it did during the Restoration period, it had to leave the Palais-Royal, which had fallen into a state of dormancy, for the heart of the new, cosmopolitan Paris. Annick Masseau, Pierre Verlet’s former student at the École du Louvre and president of the société des Amis du palais de Compiègne (Society of the Friends of the Palace of Compiègne), wrote about how the 18th century was revisited by the 19th, permeating the productions of L'Escalier de Cristal from the 1840s when its director was Pierre Isidore Lahoche (1805-1882), whose daughter Célina married Émile Pannier.

One of the most interesting things about the book is that it penetrates a world where family alliances could have repercussions in business. There is no doubt that L’Escalier de Cristal, specializing in ceramics, glassware and bronze furnishings, was able to develop its furniture branch in the 1890s thanks to the marriage between Georges Pannier, Émile’s oldest son, and Julie Damon, who inherited the Krieger-Damon company founded in the Saint-Antoine faubourg (neighborhood) in the 18th century. That is how the Pannier brothers started making Japanese-inspired furniture designed by Édouard Lièvre (1828-1886), the sale of which, along with the reproduction rights, took place at Drouot on February 27, 1890. This reaped a significant profit for L'Escalier de Cristal, which made six copies of a Japanese-style cabinet, one of its most emblematic pieces of furniture. One was acquired by Grand Duke Vladimir, Nicholas II’s uncle (now in the Hermitage Museum).

Indispensable Notebooks
How do we know that six copies were made and a member of Russia’s imperial family acquired one for 6,500 gold francs? The answer is found in a notebook of Georges’ brother Henry Pannier (1855-1935)—surely one of the most precious sources for shedding light on the fine crafts industry in Paris during the last third of the 19th century. All the items and furniture for sale at L'Escalier de Cristal when the Panniers directed it were recorded in the three notebooks that have come down to us. They feature drawings accompanied by information—often in the form of abbreviations—about measurements, materials, craftsmen, buyers and the prices they paid. The documents are fully reproduced in an appendix to the book, which is required reading for anyone wanting to authoritatively identify objects made by L'Escalier de Cristal and to take a more in-depth look into interior design based on the great 18th-century tradition of a quest for exoticism.