Long hidden away in a __TexteRechercheEnGrasBretonTexteRechercheEnGras__ collection, this major painting by the Czech artist will soon change hands. A link between two periods, the enigmatic landscape recalls the intense spirituality that guided his search for form. 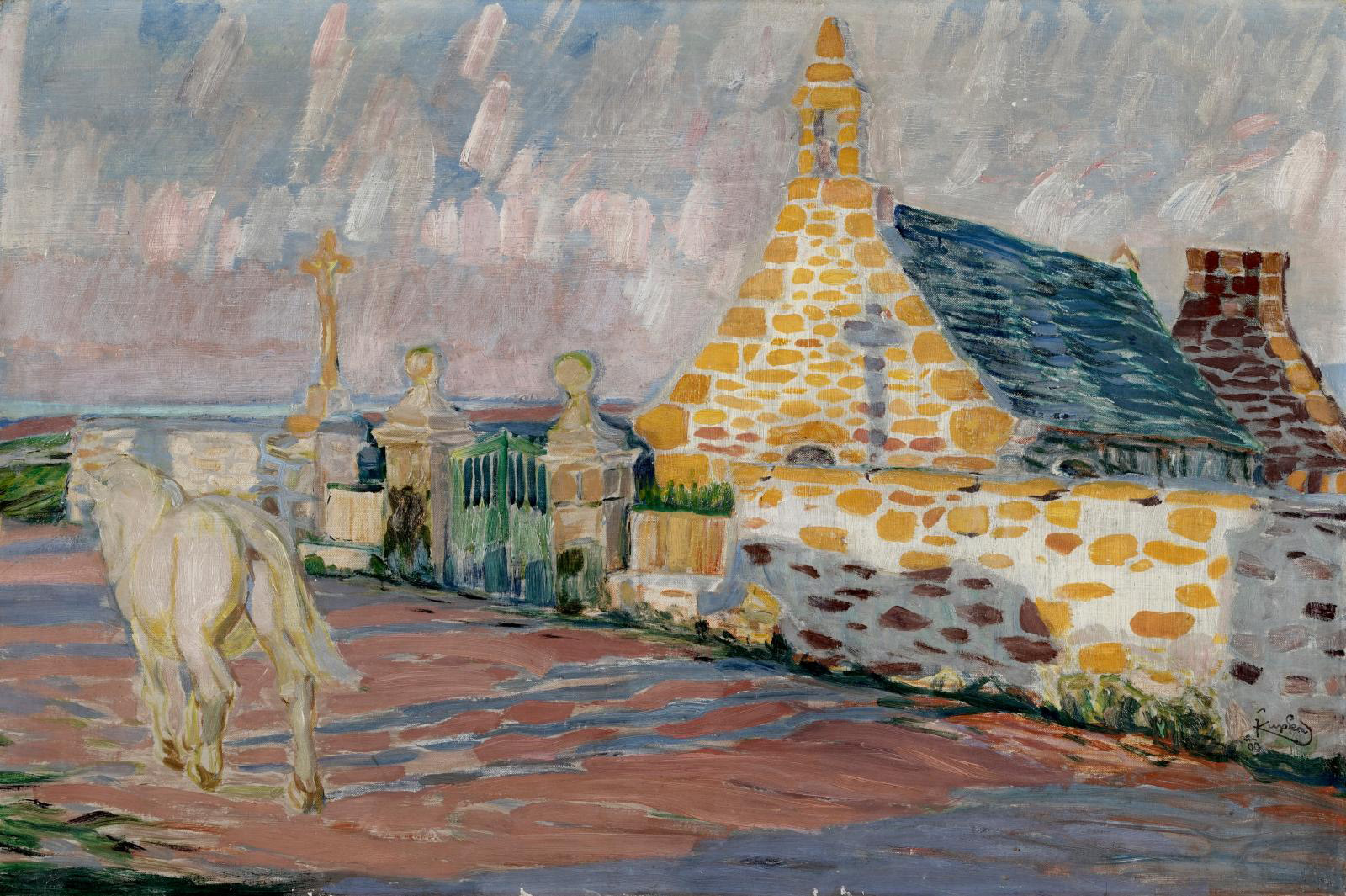 Frantisek Kupka was a leading abstract art pioneer, the precocious inventor of musical forms and rhythms. The two paintings from the “Amorpha” series that he exhibited at the 1912 Salon d’Automne were his first non-figurative works shown in France. That year, he and Marcel Duchamp joined the Section d’or, an avant-garde group for which poet Guillaume Apollinaire coined the term orphisme (Orphism). Before then, the young Czech painter, who had been living in Paris since 1896, explored many other artistic languages. To make a living, Kupka did illustrations for books and the satirical press, including L’Assiette au beurre (The Butter Dish) starting in 1901. Meanwhile, he pursued his personal work, still marked by the Symbolist spirit of his early days while experimenting with Impressionism, Fauvism and Expressionism.

A Key Work Between Figurative and Abstract Art
Kupka had already produced several masterpieces during his early period. Le Cheval blanc, la chapelle Sainte-Anne devant la mer, Trégastel (The White Horse, Saint Ann’s Chapel before the Sea, Trégastel), a 1909 oil on canvas, assuredly belongs to this first body of work. Its diagonal composition is astonishing: the horse gallops past a Breton chapel lit by the sun setting over the pale sea in the background. The scene’s strangeness is heightened by long shadows: of the horse bumping up against the low wall at a right angle and of the wayside cross on the chapel’s gable.

The colors are equally complex: shades of yellow, pink, blue and green, which Kupka often used during this period. They also turn up in the contemporary Grand nu, plans par couleurs (Planes by Colors, Large Nude), today in New York’s Guggenheim Museum. Like that work, ours is still figurative but already deconstructed by broken brushstrokes—a link between two different periods. “For Kupka, 1909 was a year of transition from his Symbolist inspiration to abstract art,” says expert Michel Maket. A year later, Le Ruban bleu (The Blue Ribbon, musée de Saint-Étienne) featured floating diamonds and rectangles. At the same time, the female model for Plans par couleurs (Planes by Colors, musée national d’Art moderne, Paris), turned into a kaleidoscopic vision.

Myths and Legends of the Celtic Province
In 1896 Kupka discovered Brittany, a haven where the young illustrator could relax far from bustling Montmartre. In 1900 he returned, staying at the Hôtel de la plage in Trégastel, the starting point for trips to the heart of the Pink Granite Coast of the Côtes d'Armor in northern Brittany and its mineral landscapes. “Here,” he said, “You also experience moments when man observes all this stoically.” Impressive boulders appear in his first masterpiece: La Vague (The Wave) from 1902 (now in the Ostrava Gallery of Fine Arts, Czech Republic), where a fascinated girl squatting gazes out at a greenish wave crashing on the reefs. In an enigmatic painting called Epona-ballade, les joies (Epona-Ride, the Joys, Prague National Gallery), two nude women ride an immaculate horse and a bay pony on a Breton beach. Placed under the protection of the Celtic goddess of equidae, this highly erotic scene is the prelude to ours, with the robust white stallion streaking across it. A leitmotif in Kupka’s early work, the horse, says Mr. Maket, “can be found in both Breton and Slavic legends; it symbolizes movement, life, freedom and sensuality.” Behind the creature driven by a primitive energy, the Trégastel chapel seems to embody harmony and the sacred, two concepts at the basis of Kupka’s work.

Czech Artists in Brittany
Kupka was not the only Czech painter in Brittany’s thrall; some of his compatriots had already arrived in the late 19th century when the Celtic province became a capital of modern art on the same footing as Paris and one of their favorite destinations. This surprising adventure was the focus of a summer 2018 exhibition at the Musée départemental breton de Quimper (Breton Departmental Museum of Quimper), “Czech Artists in Brittany, from Art Nouveau to Surrealism”, which traveled the following year to the Kinsky Palace in Prague. As early as the 1860s, painter Jaroslav Cermak spent his summers on the peninsula. Alfons Mucha could also be found there: his muse and client, actress Sarah Bernhardt, must have introduced him to the province. She is said to have invited Mucha to her incredible house on Belle-Ile-en-Mer. The Quimper show was also an opportunity to see the work of Jan Zrzavy, who lived on the coast for about 10 years. Two women of character, Vera Jicinska and Surrealist artist Toyen, completed this small community from Central Europe, but Kupka’s art stands out for its deep spirituality.