Kamel Mennour, Still Ahead of the Game

For 20 years, the Parisian has pursued a single goal: making his contemporary art gallery the best while making occasional forays into Old Masters. 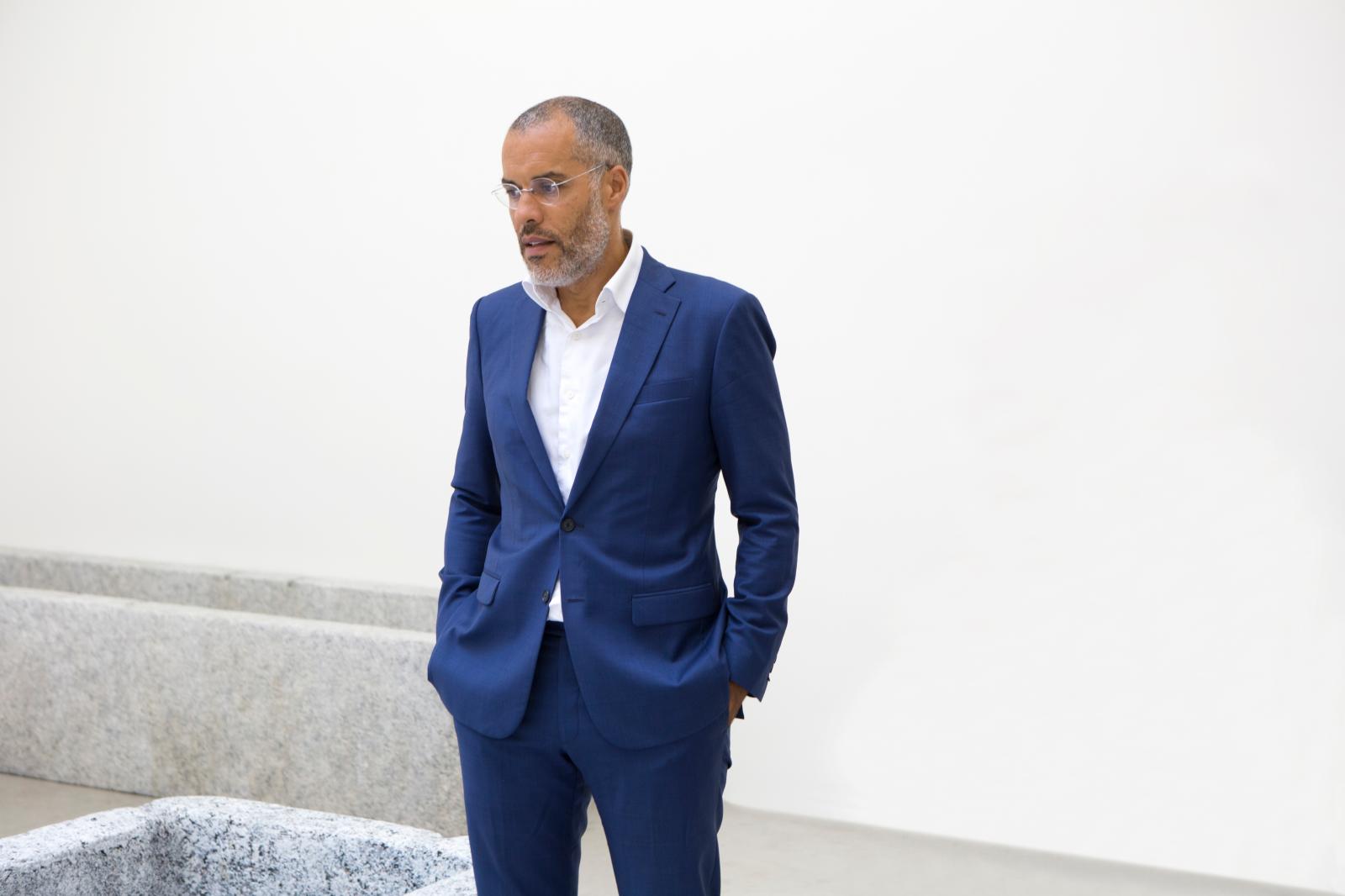 What does this anniversary mean to you and how will you celebrate it?
It’s a sign of success as well as an opportunity to take stock. Gallimard will publish a book in which people will talk about Kamel Mennour’s 20 years in Paris, and Hatje Cantz will publish a book of pictures. I don’t want to give everything away.

In 2012, you described your gallery as a network between rising stars and well-known artists. Is that still the case?
We have quite the coherent stable of artists. The choice of the “Indian Summer” show (editor’s note: presented last month on rue Saint-André-des-Arts) was to show our artists who are between 27 and 40 years old, like Camille Henrot, Latifa Echakhch, Neïl Beloufa, etc. We’re also interested in established talents, like Lee Ufan and Anish Kapoor, and increasingly in artists who have passed, because soon we’re going to work with a new estate. I’d like the gallery to present a survey of a certain history of art, either by focusing on an artist or by placing works by two artists side by side, like we did last June with the dialogue between Caravaggio and Buren. The gallery will move in that direction.

Why display the Turquin cabinet's Caravaggio opposite an original work by Buren?
It was a combination of circumstances. I was approached with a proposal for a project, a bit different from what was eventually done because it wasn’t about displaying the painting at the gallery at first. I immediately thought of Buren: I wanted an artist who could dialogue with the site’s history and architecture. Then he had to be convinced and work in a hurry. Turquin was brave to make an incursion into a field he didn’t know at all. As for me, I enjoyed myself: I invited collectors, my son’s high school class, etc. That’s also what galleries do: organise conferences and comparisons. It takes vitality.

People reacted rather strongly.
That’s the point. Abroad, everybody was stunned. I’d like to know what the microcosm of old art in France thought of it. Two completely different worlds were side by side for a few days. Perhaps my job is also to break down the walls between categories. I got many proposals after that presentation, such as participating in the Biennale Paris, but I turned them down. I would’ve felt like an intruder. I remember the Biennale des Antiquaires in its heyday: it was a beacon. It’s a shame that French antique dealers rip each other apart. At FIAC, the French dealers stood together even when things were bad.

Should we expect your gallery to make other forays into Old Masters?
A gallery must remain vibrant, even if it means swimming against the tide. I’ve already worked with Christie’s and the Kraemer gallery, which asked me to have old and contemporary pieces dialogue with each other. We’ve shown photography and somewhat more modern contemporary art throughout our history. Now we want to navigate other waters. Art is desire, celestial food. When I need inspiration, I go to the Louvre to see The Death of Sardanapalus. I can spend three hours looking at a work like The Night Watch at the Rijksmuseum.

How did your first participation in fine art fairs like TEFAF go?
Very well! We went to TEFAF Maastricht and TEFAF New York and we plan to return. In New York, we did a solo show of Bertrand Lavier’s work. The fair chose one of his works for its banners on Fifth Avenue—just imagine how proud I was! We met all the collectors and the MET and MoMA trustees. I especially like this event’s intimate dimension. In Maastricht, our booth was structured around mineral material, with very precious pieces from Jean Arp to Alicja Kwade. The fair wants to open the spectrum to newer art: there were a dozen contemporary art gallerists.

You were also in Lebanon for the Beirut Art Fair, a first for the gallery.
One of my directors, who is Lebanese, already knew some collectors there, like Tony Salamé, who set up a foundation in Beirut with whom we work a lot. Many Lebanese people live in New York, Paris, and London...

What does FIAC mean to you nowadays?
We opened in 1999 and had the opportunity to participate in the fair the following year. At the time, FIAC was in its deathbed. I remember that Beaux-Arts magazine titled "Is the fair dead?" Since 2003, I’ve been a member of the "reconstruction committee". We started from scratch. Today, FIAC is an essential event. It’s made Paris a desirable city again. Some even prefer it to Frieze, especially with the threat of Brexit.

Are you afraid of the United Kingdom leaving the European Union, like your colleague David Zwirner, who has moved to Paris?
Yes, but we’re keeping our space in London and will try to stay the course. Zwirner is a great gallery owner. This is very good news for Paris, a strong sign. I feel very kindly towards my colleagues. It takes several people to be able to shine.

Which artist was the hardest to convince?
Buren! I met him at a dinner party in 2006. He’d never heard of me. I met him by chance a little later, on a plane. I took a chance and said, "If I were you, I’d go to a young man like me. You don't have to prove anything anymore, you're the boss." Two weeks later, he called me. He had just left Marian Goodman, and everyone was after him: Lambert, Perrotin, Templon, Ropac. Art is a bit like football: it’s normal for a great player to want to join a great team.

Is the estate war inevitable?
In any case, I feel like I'm excavating things, which is not necessarily lucrative: Gina Pane doesn't really bring us any money. The last work of hers we sold, Sentimental Action, was for MoMA. So, it's more a matter of positioning.

When you opened your space in the 8th arrondissement of Paris, you called it a wasteland. Any regrets?
No. Now all the galleries want to move there! I know that the Hauser and Wirth Gallery is looking there, and Zwirner was thinking of moving there before signing with Lambert. Ten years ago, it was a real choice. Some people take the plane to go to their branch in Shanghai. I take the metro to cross the Seine. I like this proximity. I'm a kind of used-book seller! I very quickly decided not to open abroad, except in London, which is only two hours from Paris. I wanted to stay focused on my city.

You’re not participating in the Paris Gallery Weekend. Do you want to go it alone?
No, I can be collegial: I’m a member of the Comité Professionnel des Galeries d'Art (Art Gallery Committee). And when I’m excited about a project, I don't hesitate to get involved, as in the charity sale at the Necker Hospital ("Heroes for Imagine", ed.). But the Paris Gallery Weekend has no vision, no real intention. We should’ve done this 15 years ago, when the one in Berlin was launched. It’s not enough to reproduce a pattern; you need to invent things.

Do you go to auction houses?
I’ll tell you an anecdote: I often invite the classes of my five children to see the exhibitions at the gallery. It just so happens that Alexandre Giquello did the same thing at Drouot, and since my daughter is in his daughter’s class, I went with them. I hadn’t been there in 15 years. In a small room, I spotted a beautiful snake skeleton and asked my employee to bid for it by phone. I should do this more often.

1999
Opened a gallery on rue Mazarine, then in 2007 in a private mansion on rue Saint-André-des-Arts

Fabrizio Moretti, the Most British of Florentine Dealers
Not to be missed
Interviews