Known as “La Belle Juliette”, Jeanne-Françoise Julie Adelaïde Récamier (1777-1849) boasted not just beauty, but great literary and artistic talent, and political spirit. Her salon was a cornerstone of intellectual circles from the start of the French Consulate right through until the last days of the July Monarchy. 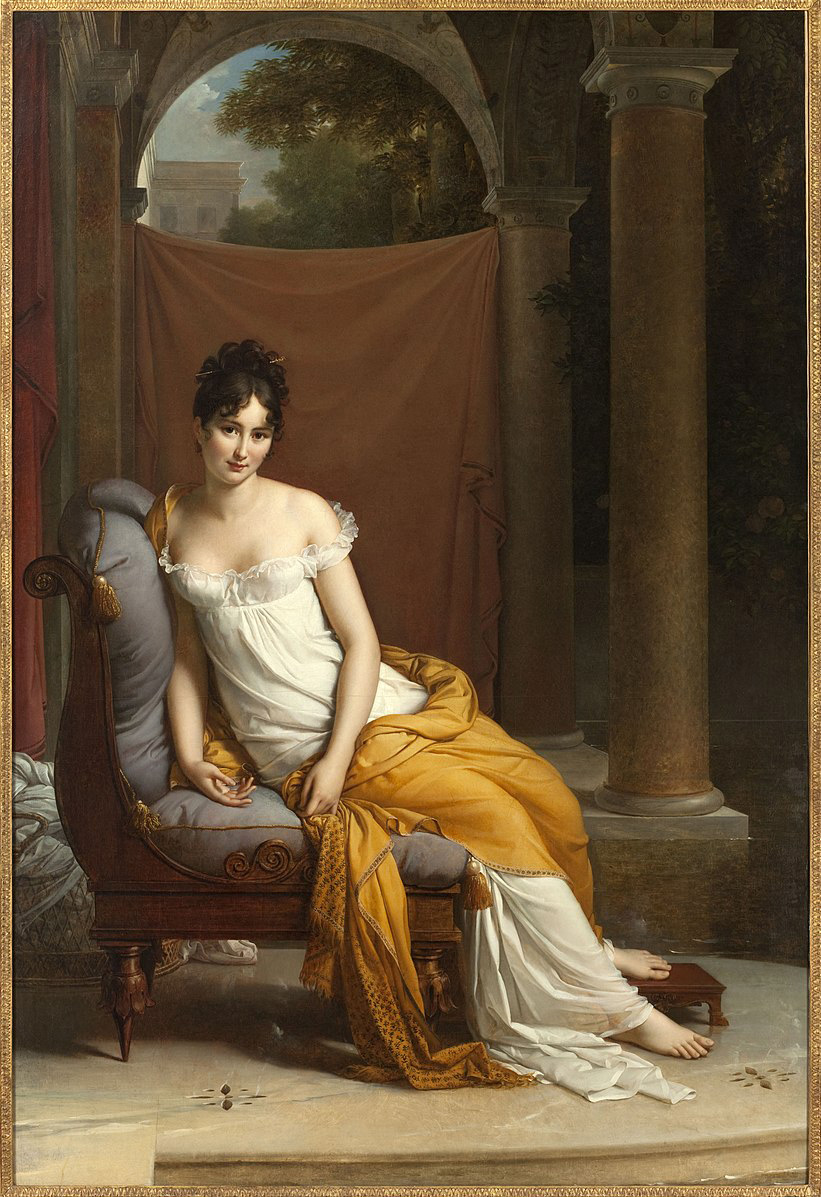 At the age of 15, she married Jacques Récamier, an affluent banker more than 30 years her senior. Just before their marriage, he wrote to a friend: “I am not in love with her, but I feel for her a genuine and tender attachment, which convinces me that this interesting creature will be a partner.” Their marriage was never consummated. In fact, Jacques Récamier was rumored to be her true father, who married to make her his heir. After all, he admitted to having felt more romantic feelings for his mother-in-law than for his wife. All this didn’t prevent the beautiful Juliette from receiving a wide array of admirers.

Regardless of her place in the bourgeoisie, as an 18th-century woman, Récamier clearly had to work to cultivate a particular image of herself in order to achieve the status she reached—as evidenced by an exhibition in her hometown of Lyon a decade ago. “Juliette Récamier: Muse and Patron” at the Museum of Fine Arts addressed the construction of this image, in which she married beauty and intelligence, without ever losing the virtue of purity. Her favorite item of jewelry was not diamonds, so à la mode at the time, but pearls: symbols of incorruptibility and innocence; love and fertility. Positioning herself thus, on the fine line between sensuality and chastity, she drew the attention of figures such as Lucien Bonaparte, the younger, more vehemently revolutionary brother of Napoleon I, and Prince Augustus of Prussia, whose marriage offer she spurned. The writers who frequented her salon included François-René de Chateaubriand (1768-1848), whose character Léonie she inspired, and the writer, philosopher and Academician Pierre-Simon Ballanche, who penned her as his Antigone.

When the letters of this early celebrity appeared at auction on May 27, 1895, then, it is no wonder that the room was packed. Half a century after her death, it was not Juliette Récamier’s salon, but the Hôtel Drouot, that drew the big names. Victor Henri Rochefort, vaudeville writer, politician and “the prince of press controversy” (a violent critic of the Empire, and sympathizer of the Communards, he also wrote on the Panama scandals and the Dreyfus affair) attended, buying letters from General Moreau and the Count of Neipperg to Récamier. However, he wouldn’t raise a Monsieur Champion’s bid of 160 Francs (roughly $1,000 today) for a letter from Napoleon III to Chateaubriand. We can only speculate what artist François Gérard wrote in his 24 letters to Juliette, for they were bought by the painter’s heir for 105 Francs (or around $650 today). Academic artist Jacques-Louis David had begun a portrait of Récamier, but abandoned it upon hearing that Gérard had been commissioned to paint her before he had. In it she sits on her favorite style of chaise longue, backed on both ends, which would come to be named after her. It’s a testament to the wide extent of her influence, and Juliette and the Récamier chaise longue would be immortalized almost two centuries later in René Magritte’s Perspective: Madame Récamier by David. But its title remains a reflection of the fact that for a woman like Juliette, her status was and would be defined by the men who surrounded her.