The controversy over altering the Louvre’s Greek and Roman Bronze Rooms erupted at the end of a building project that occupied an entire wing of the museum. La Gazette talked about the overall program with its president, Jean-Luc Martinez, and architect Michel Goutal. 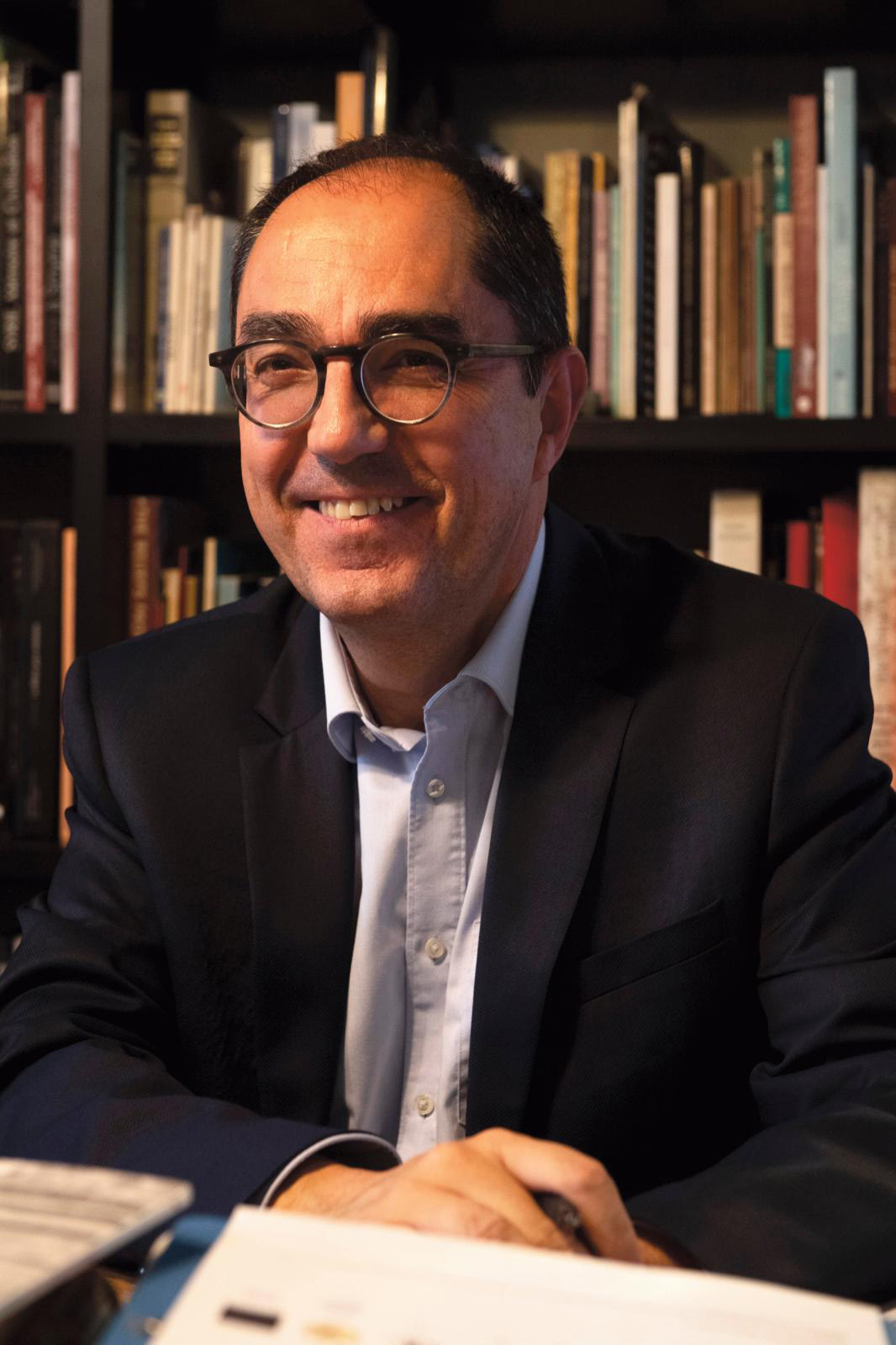 What’s Your View on the Controversy?
As you know, Cy Twombly’s ceiling hasn’t been touched. In fact, we had made it clear to him from the start that the museography might change. It was inevitable: the project implemented today was formalized in 2008, two years before the unveiling of the ceiling. All the questions were asked, the rooms were public, and today the Louvre stands accused of lacking transparency. This creates a very bad image of museums, which are already under fire for being out of touch with society.

Could You Talk About the Project’s Significance?
The Grand Louvre program is still unfinished. It focuses on the fundamental issue of the entrance and the layout of the three wings. To the south, the Denon Wing has hardly been touched as such, and today its galleries have the oldest displays. The largest Etruscan collection outside Italy is crammed into just three rooms that no longer meet conservation standards. The Roman collection, which accounts for 80 to 90% of the sculptures, is also one of the largest outside Italy. The idea of repurposing the room already arose in 1997. On the second floor, the Henri II Room has been allotted to silverware, the former jewelry room turned into the glass room, and the terracottas have been moved to a place near the Campana Gallery. The rearrangement of the Grecian art collections was finished in 2010, when Henri Loyrette [editor’s note: the previous director of the Louvre] dedicated the salle des Sept-Cheminées (Room of the Seven Fireplaces) to the Etruscan and Italic art collections. In the 19th century, it was converted into a gallery for large paintings with a glass roof designed by Duban; the windows were blocked up to emphasize the zenithal lighting and allow for the paintings to be hung from floor to ceiling. The 16th-century wainscoting in the king’s bedchamber was removed and reinstalled in the Egyptian antiquities department’s “museum of sovereigns”. In the Bronze Room, which was also part of the king’s apartments, the walls aren’t in Burgundy stone, as some people claim. They were faced with an imitation stone cladding. These apartments had seven or eight different layouts throughout history.

What Meaning Can Be Attributed To Them?
In the 19th century, nobody thought about a “visitor’s route”. The museum was made for enlightened art lovers who knew the places and works. The idea of a visitor’s route came about in the 1930s when Verne and Ferran [editor's note: architect Albert Ferran and Henri Verne, director from 1926 to 1939, who was already considering a "Grand Louvre" open to the general public] chose to close doors, obliging people to walk in a specific direction. This was notably the case with the king's apartments: hence the idea of re-establishing circulation flows while turning the spaces over to the Etruscan collections. In 1997, the desire to restore coherence to the spaces was already expressed, even though the interior layout of the rooms’ display cases had just been redone. But Loyrette said a project at the Louvre could take 25 years to complete, and he was right. A display can change considerably in the space of a generation.

“The 20th century wanted to mineralize everything,” said Michel Goutal, head architect of historic monuments. How do you plan to restore the palace’s forgotten history?
The other issue underlying Michel Goutal's project involves the lack of historical interest in the king's apartments. The Louvre is a royal palace without a king, but we no longer know how it functioned. The original idea when the museum opened in 1793, the year after the monarchy was abolished, was to let the people see the royal apartments. In the 20th century, all these doors were closed off to channel visitors into a predetermined route. Small storerooms with inadequate conservation conditions were built between the doors. The Grand Louvre failed to take into account the function of these rooms, which we can open again today. The so-called "Glass Room," redesigned by Percier and Fontaine, is the Louvre’s nexus. The king would leave his apartments through this large room and walk across the Apollo Gallery to reach the Salon Carré. Reopening this access, we rediscovered an enfilade of rooms with a large reception hall where the king could host balls. Our project aims to improve circulation in the heart of the palace, display the collections better and coherently restore the dismantled royal apartments.

What Are the Pending Major Works?
We’re wrapping up the restoration of the gallery façade overlooking the river. To the north, work on structurally reinforcing the Rohan Wing and restoring the rue de Rivoli façades will begin. The gates are being restored to close the site [editor’s note: from the Concorde to Saint-Germain l’Auxerrois] when security requires it. We’re planning to restore the Carrousel Arch of Triumph.

Has the Covid Pandemic Delayed these Projects?
For the new Etruscan and italic rooms we talked about, the closing of the museum has actually let us finish the work ahead of schedule. They should be open in June. For other projects, such as mending the roofs on rue de Rivoli and the west wing of the Cour Carrée, Covid has compelled us to postpone some of the work until after 2024. The maintenance costs [editor's note: €60M a year], borne by the museum, are significant.

The Louvre is a museum that in the 20th century was built within the former royal palace. By reopening doors and windows, the soon-to-be visible rearrangement of the Etruscan collections aims to restore the perspectives of these different periods. Since it is impossible to recreate the original appearance, it will essentially restore the 19th-century decors and tones. Not surprisingly, the dispute focuses on the Bronze Room because its new appearance contrasts so starkly with the 1930s beige windows, stucco-covered walls imitating ashlar masonry and limestone floor under a lowered white ceiling (on which Twombly's blue sky was painted) framed by an oversized cornice.

“The 20th century,” said the head architect of the Monuments Historiques (national heritage site) Michel Goutal, “wanted to mineralize everything," when logic would dictate, in his eyes, that an upstairs royal apartment should have bold colors and a wooden floor. Designed by Pierre Lescot in the mid-16th century, the Henri II Wing’s “upper” room stretches out over 5381.9 ft2 (500 m2). In 1819, Pierre Fontaine had a triumphal arch built at either end to turn the space into an assembly room. the restoration involves reopening the central window overlooking the Napoleon courtyard and restoring the other windows’ alignment. The walls are repainted in a dark terracotta color tinged with carmine and ochre to provide a connection with the neighboring rooms. It gives out onto the Henri II Room, where the 16th-century ceiling was decorated with Braque’s birds in 1953 and the wainscoting was restored. The work brought to light a 49.2 foot or 15 m secret corridor built for the king in 1558, which visitors can now see. This is followed by the enormous 2798.6 ft2 (260 m2) Salle des Sept-Cheminées, which combines several former rooms with 22.11 ft or 7 meter high ceilings. Its 1851 "Duban" chocolate and ebony-toned decoration was restored. When the vault in what used to be the king's room was cleaned, we found astonishing green vegetal decoration from the 1850s. The windows Duban blocked up have been reopened, as well as the passage on the left-hand (east) side, towards the Campana Gallery, which runs parallel to the one leading to the Museum of Charles X. Eight rooms of antiquities have been kept as they were in the 1820s.

On the opposite (west) side, an opening was made to the room known as the "Jewel Room" or "Glass Room", which, in 1655, connected the king's pavilion with the Petite Galerie. In the 1820s, Fontaine referred back to the original decoration, installing the blue Turquin marble fireplace from Marie-Antoinette's antechamber at Versailles. The restoration aims to reestablish the polychromy based on a copy of this mantelpiece (still at Versailles), the restored wainscoting and windows by Jacob Desmalter, and the mahogany tint of the doors. The room, which will feature a history of the royal apartments, overlooks the Apollo Gallery leading to the Salon Carré, of which the Duban décor was cleaned, before the grand Napoleon staircase and the Winged Victory of Samothrace.

ICOM: A Shared Definition Brings Down the Temperature in the World of Museums
Not to be missed
Interviews