Jean-Henri Riesener’s Luxury in the Turn of a Key 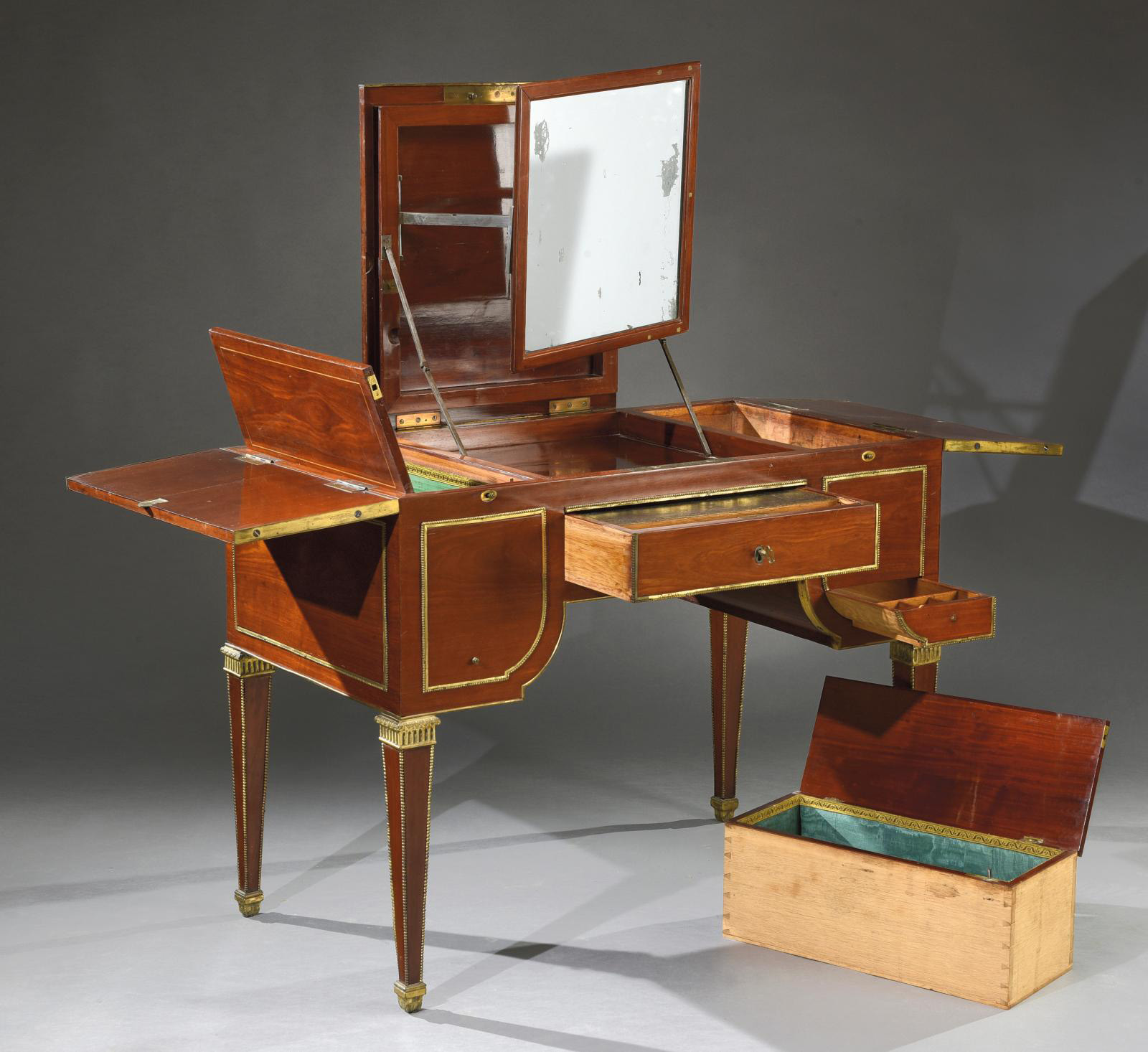 In the 1750s, the most notable among them was Jean-François Oeben (1721-1763), who first crafted a “Burgundy-style” table for Louis XV’s handicapped grandson, whose title, the Duke of Burgundy, gave this type of mechanical furniture its name. Next, he made the famous roll-top desk for Louis XV at Versailles. It took Oeben and his apprentice Jean-Henri Riesener nine years from 1760 to 1769 to make the piece. The challenge was to perfect a complex opening system with a single turn of the key. Putting their heads together, they carried out many experiments, developing the completely invisible, non-manual, automatic system at a cost of over 10,000 livres. It was Riesener who found the solution with a set of weights and counterweights. The student had surpassed the teacher. Before his death in 1763, Oeben naturally chose Riesener to take over his Arsenal workshop.

In 1768 Riesener was admitted to the guild and could start putting his own stamp on his furniture. His reputation grew and when Louis XVI acceded to the throne in 1774 he succeeded the king’s cabinetmaker Gilles Joubert. Over a 10-year period, Riesener delivered 938,000 livres worth of furniture to the Garde-Meuble de la Couronne (the organization that managed the French royal household). While Madame de Pompadour adored Oeben’s mechanical tables, Marie-Antoinette loved his combination dressing tables.

Ingenious Mechanisms
This piece has three flaps on the top that open up to reveal compartments for toiletry bottles and accessories on the sides. One of the front drawers can serve as a writing desk. It bears a resemblance to two “country” models at Versailles: one in Marie-Antoinette’s ground-floor petit appartement (small apartment) on the marble courtyard, for which it was delivered in 1784, the other at the Petit Trianon. The marquetry on these dressing tables is more restrained, but their English-inspired mahogany veneer and discrete bronzes highlighting pure lines are no less elegant.

Larger cases and, especially, a much more complex mirror mechanism, set ours apart from these two examples. This one is not just affixed to the flap but held by a metal mechanism with two sliding crossbars supporting a rack plate to adjust the mirror’s height. This improvement sprang from the ingenuity of Riesener, who designed and made his own furniture, but it was also made possible by setting up his workshop along the same lines as Oeben, "the King's cabinetmaker-mechanic", did before him. Being far from the guild system allowed him to have an iron forge (for locks, compasses, secret mechanisms, etc.) and a furnace for the bronzes in his workshop. This is an exceptional piece of furniture by an outstanding craftsman.

Riesener: A Remarkable Stamp and Collection