Curated by Eleanor Nairne, “Jean Dubuffet: Brutal Beauty” harmoniously compliments the site of the Barbican Gallery, in London. Brutalist architecture and Dubuffet’s Art Brut go hand in hand, creating a world of materiality and delight for the audience to enjoy. 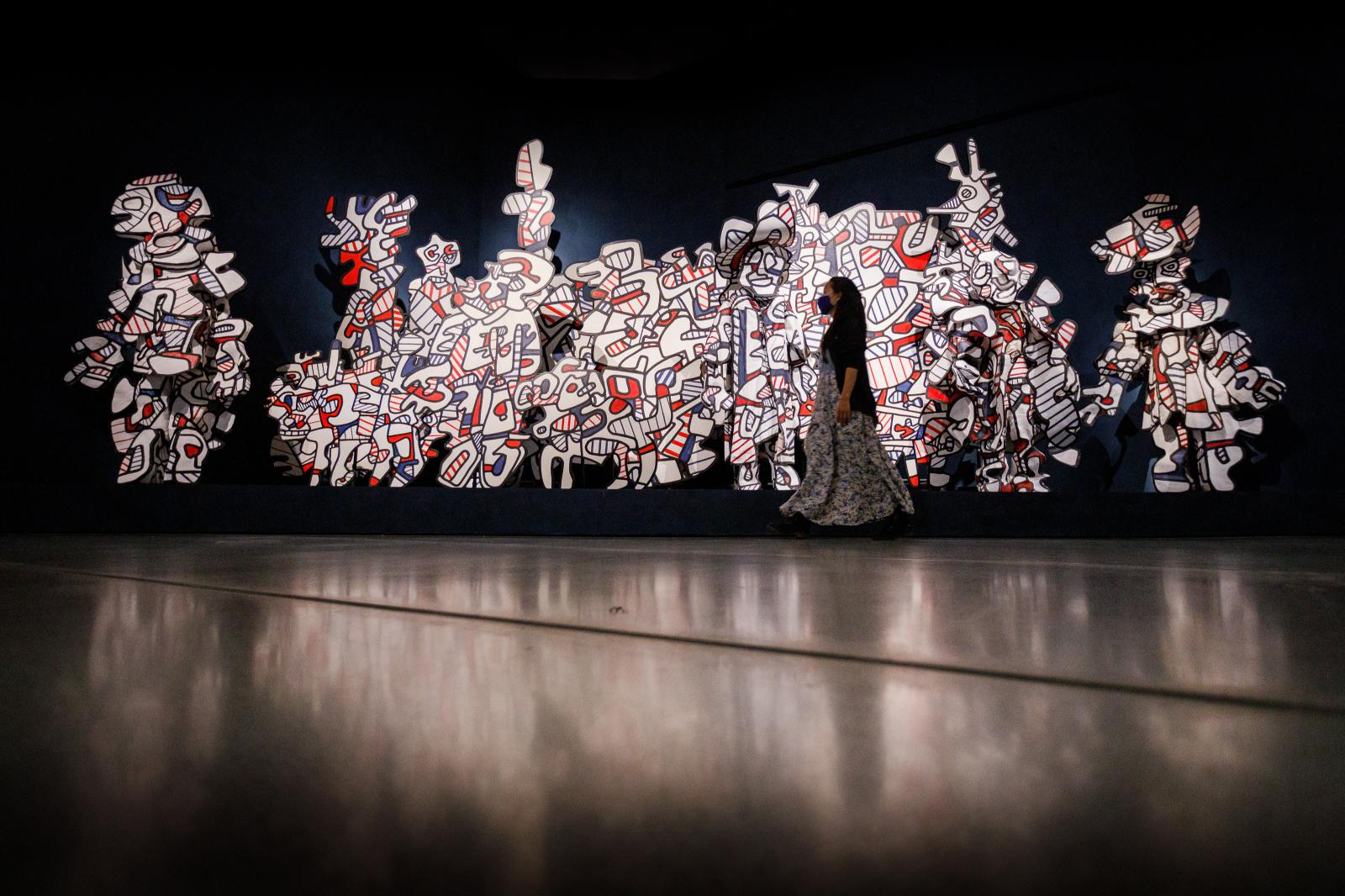 After three lockdowns in the UK, museums are finally open again, and an exhibition of Dubuffet (1901-85) is attuned to our sensibilities, with the artist’s “aim for an art that is directly plugged into our current life”. Tired of being separated at home in our zoom cells, this assault on material and its tangibility is so exciting and invigorating to situate ourselves in. Capturing the lifetime of an artist whose oeuvre spans 40 years, the Barbican Gallery has put together a colossal selection of 150 works, thoughtfully laid out in 15 themed rooms.

With so much of Dubuffet’s career to revel in, I was especially drawn to his Female Bodies and Landscape paintings, which play fleshy tricks on the eye. In the Female Bodies series, started in April 1950, he opposed the classical tradition of the female nude. Creating instead a fleshy flattening of form, like a body flayed, leaving behind only the skin in his painted works. Mixing a thick paste from zinc oxide and viscous varnish, using a putty knife to apply it to the canvas, he crafted, what he called, “textures calling to mind human flesh”. The material mixture repelled oil paint so the combination of media on the surface created marbles of unforeseen colors. This fleshy treatment of human form translates in his landscapes, which he described as a journey to “the country of the formless”. Inspired by his trips to the Sahara desert, he crafted an arid atmosphere in these works. Globule-like forms made from a thick putty are coated onto the canvas. They are painted sculptures, pulsating, carved in high impasto. While flat, the works on paper resemble automatic scribbles: crystallizations of nature, in which fractal forms emerge from his density of line.

Going from the raw to the refined: I was immediately struck by the jewel-like quality of the butterfly wings in his first experiments with assemblage from 1953. The collaged butterfly wings are iridescent, when you go in close, the surface dances before your eyes. Like biological specimens caught beneath glass, their life has gone but their delicacy and color remain breathtaking, heightened by the artist’s staining of the background and his touches of watercolor. Building on these previous fleshy and exquisite aesthetics, L’Extravagante (The Extravagant One), July 1954, the poster image for the exhibition, is haunting, its succulent and wet paints, industrial mixed with oil, blur and warp into each other, a horrific yet empathetic creature stares back at me. This is mirrored by the small grotesque sculpture, Personnage aux jeux de stress (Character with Rhinestone Eyes) 1954, which hums with metallic tones showing Dubuffet’s innovative manipulation of materials, using the remnants of a burnt car.

The most refreshing and memorable aspects of the exhibition are actually the works of his Art Brut collection, ‘outsider’ artists, whose art seems timeless and distanced from any sense of the academic tradition. Dubuffet came up with the term ‘Art Brut’, following his trip to Switzerland where he visited the art collections of psychiatric hospitals, co-founding the Compagnie de l’Art Brut in 1948. He said, “I realized that millions of possibilities of expression were available outside of the accepted cultural avenues”.

These artists were stimuli for Dubuffet and interspersed between his own paintings and sculptures here, we can visualize how he was inspired by these unorthodox artworks. I was delighted to discover artists such as Aloïse Corbaz, Fleury Joseph Crépin, and, in particular, Gaston Chaissac’s oyster shells painted with faces and dysmorphic bodies in Indian ink. The upstairs gallery is intimate in scale and meant to recall the experimental basement of the René Drouin gallery in Paris, which Dubuffet turned into a ‘Foyer’ for his exhibitions. The downstairs gallery is much larger and encapsulates the moment when Dubuffet’s collection returns to him in 1962, from the home of the collector Alfonso Ossorio on Long Island. The pieces are delicately placed and I was immersed in the world of the artist’s visual sphere—experiencing his fascination for the mystical, symbolism and the absurd. This was another chance to discover new artists including Sylvain Lecocq, Madge Gill and Augustin Lesage. This curatorial immersion into ‘outsider’ art effectively mirrors Dubuffet’s own practice of world-making for himself and his audience.

Dubuffet’s late and two most commercially successful series are downstairs. The Paris Circus, in which he captured the new consumer society of Paris and its capitalist spectacle in the post-war boom. Strange anthropomorphic figures with white faces and bald heads populate the garish, bright colors of Dubuffet’s modern life. In Restaurant Rougeot 1, 1961, he imagines a busy cafe in red tones, the fleshy colors capturing the bustle of consumption. La Main dans le sac, 1961 (Caught in the Act), at first glance, seems to be a harmonious jigsaw of color, but as you move closer, the streets emerge with Dubuffet’s alien-like characters dotted around the bottom half of the painting, some standing and talking, some driving vehicles, hybrids of cars, planes and submarines. This busywork feels like a birds-eye view of the artist’s staged city, the figures living in his spectacle of sin, not dissimilar to a Hieronymus Bosch painting.

Dubuffet’s garden of sculptures, Coucou Bazar, takes my breath away. The sculptures or “practicables” (theatrical props) were produced in a former munitions factory, and comprised 175 freestanding elements. Standing in the same space as his painted l’hourloupe works, in their characteristic red, white and blue, these become a “living painting”, in the artist’s own words. Unfortunately, the pieces are now too fragile to be performed, so their static placement on the navy stage in the center resembles as close to the first performance of 1973 as possible. The jigsaw of the cartoon-like figures demonstrates the enjoyment he had in his practice: playing with materials and texture in the most delightful way.

Dubuffet’s creative practice was borne out of the crisis of World War II, as we emerge from our crisis of today, his paintings and sculptures are a reminder of the power of creativity to rebuild society. The exhibition is restorative and a delightful distraction to the unstable realities we are living.

The Power of Art Brut

"Œuvres Choisies": An Imaginary Menagerie and More
Newsfeed
See all news
Seena Hodges Named Walker Art Center’s First African American Chair
NFTs Debut at Art Basel – With Some Success
Marie Antoinette’s Diamond Bracelets Are Heading to Market
An Encouraging First Half-Year for Italian Auction Houses
Not to be missed
Exhibitions
The Hôtel Drouot Reopens for the Season with the “Oeuvres…
The opening of the Drouot season is marked by "Oeuvres Choisies",…
Exhibitions
The New Woman Behind the Camera
Now at the Metropolitan Museum in New York and then on to the National…
Exhibitions
Gardens at Giverny, from Monet to Bonnard
Composed, like a huge bouquet of about a hundred paintings, drawings,…
Exhibitions
The Giacomettis, a Family of Creators
We all know that Alberto Giacometti was talented, but what do we…