The interior designer is publishing a book in French and English presenting some thirty projects, mostly for houses of collectors, for whom he has become the go-to man. 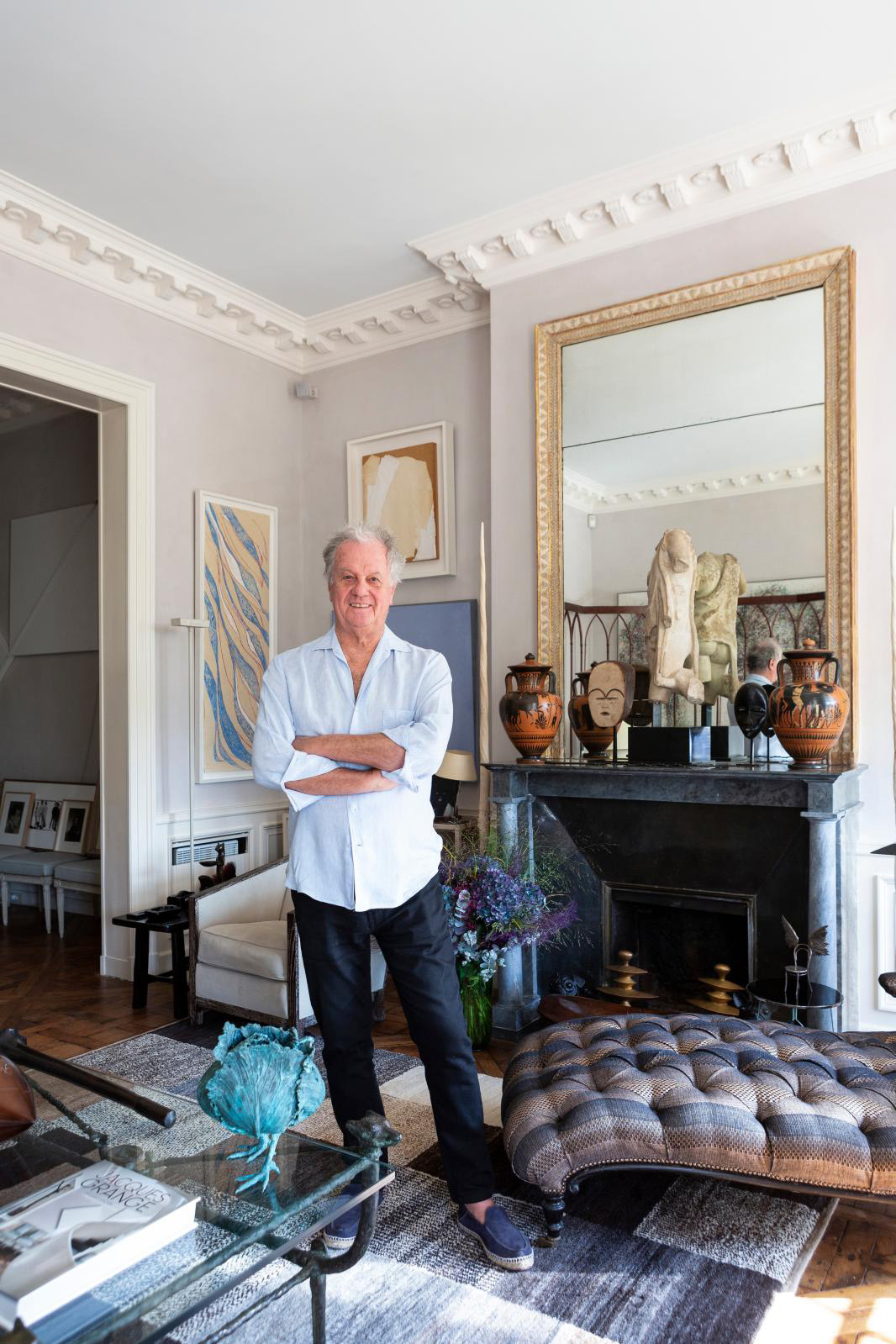 His life has been marked by the many encounters that established his career and the objects that nurtured his taste. Interior designer Henri Samuel, patron Marie Laure de Noailles, designer Yves Saint Laurent, philanthropist Ronald Lauder, and the collectors Terry de Gunzburg and François Pinault, as arbiters of style and refined collectors—not to mention those whose names he discreetly withholds, all shaped his eye for design. "There is no great interior designer without a great client"... Throughout the pages of his new book, we can see exactly what he means. His interiors are like harmonious conversations between art lovers. Their luxury is subtle, their eclecticism studied, their comfort cultivated. And the setting always gives works of art and signed pieces of furniture their due. There are no superfluous gestures; no "wow" effect. Modestly, he says he does "contemporary classic". But this apparent simplicity is carefully referenced. A true delight for the initiated.

How did your vocation come about?
I dropped out of school in tenth grade, as I had very bad grades. I was only good at drawing. Every Thursday, I attended the workshop for under-15s at the Musée des Arts Décoratifs (Museum of Decorative Arts). My mother made inquiries and it was suggested I attend the École Boulle in Paris. After a year's preparation, I passed the competitive entrance exam and stayed there for four years. Then I went on to Camondo (a design and architecture school attached to the Musée des Arts Décoratifs in Paris—Ed.).

What did you study?
At the École Boulle, we studied art history in the morning and had workshops in the afternoon. After a year, we specialized in one field. I chose tapestry and I graduated first, with a vocational training certificate as a tapestry-maker! That's why I know how to make beautiful sofas, like the ones at Decour! At Camondo, we learned interior design, but I only stayed one year. I had a friend, Michel-Yves Bolloré, the brother of Vincent (a French businessman and millionaire—Ed.), who lived in a private mansion decorated by Henri Samuel. It was my first eyeopener in terms of aesthetics. I dreamed of doing an internship with him. Mme Bolloré put in a word, and that's how I came to work for Henri Samuel in 1965.

You then discovered the grandiose decorative arts...
At the time, Henri Samuel was overseeing the restoration of the Grand Trianon, the Château d'Armainvilliers for Baron Edmond de Rothschild and the apartment of the entrepreneur Marcel Bleustein-Blanchet. I was the errand boy who carried the packages, collected the orders and had to go to see Diego Giacometti, who was in charge of the library at the latter's home, to tell him that "Mr. Samuel is getting impatient..." I was learning on the job.

With Henri Samuel you also learned eclecticism?
Yes, and especially a keen interest in contemporary artists like Diego Giacometti, Philippe Hiquily and Guy de Rougemont, with whom I later had working on the Montparnasse tower.

You then joined the antique dealer Didier Aaron?
When Henri Samuel closed, I knocked on a few doors and Didier Aaron hired me. That was in 1968. I was working in the interior design office of his partner, Alain Demachy, but he soon pushed me forward when he saw I was going down well. My first big client was Princess Ashraf, the Shah's twin sister.

And then you met Yves Saint Laurent and Pierre Bergé...
I was friends with Yves before working for him. One day, he called me. He had purchased a studio in Avenue de Breteuil and wanted me to do "something light and airy, like in an Antonioni movie...". I designed the apartment in a modernist spirit, which he liked a lot. He then started Deauville with Victor Grandpierre, Christian Dior's interior designer, who had done his fashion house. But it didn't work. Grandpierre didn't understand Yves' Proustian dream, the Water Lilies, the Viscontian side. He wanted the doors and the chandeliers to be like in the film The Innocent. So gradually I took over. We followed that with Marrakesh and later on Tangier. It was the adventure of a lifetime.

They shared their love of beautiful objects and charming things with you...
Yves adored cheap stuff! He would say, "it's the only real thing!" This frustrated Pierre a bit. He liked to go to Le Village Suisse and the Louvre des Antiquaires in Paris.

Did you go to Drouot, too?
Yes. I remember the Jacques Doucet sale in 1972. I managed to buy two chairs by Paul Iribe from Edmonde-Charles Roux (a French woman of letters—Ed.). She had chosen me to design her apartment in Rue des Saints-Pères and I introduced her to Art Deco. I was proud to be in the room. Saint Laurent was there, though I didn't yet know him.

Who was buying Art Deco at the time?
People like Andy Warhol, Yves Saint Laurent, Hélène Rochas and Pierre Hebey. I was the little one following behind, trying to pick up the crumbs. And I persuaded Edmonde Charles-Roux, Micheline Maus and Françoise Lafon to adopt this taste.

A taste passed on to you by Marie-Laure de Noailles?
Absolutely. My second aesthetic shock was Marie-Laure's mansion designed by Jean-Michel Frank: the parchment drawing-room, the bronze doors, the mica fireplace, the tiny room where we had lunch, hung with paintings by Géricault and Watteau where we ate, and the small straw-decorated room he used as a studio.

How did you meet him?
François-Marie Banier (a photographer and writer—Ed.) and I lived on the Rue Servandoni and our neighbor was the poet Théo Léger, who knew Marie-Laure. We longed to be invited to her house. The mansion in Place des États-Unis was our Holy Grail. Léger gave us a piece of advice: Marie-Laure painted and was exhibiting in Rue des Beaux-Arts. All we had to do was go to the preview and charm her. Which we did. I then saw her a lot until her death in 1970. In the Villa Noailles in Hyères, I discovered Chareau, Jourdain, Eileen Gray and Robert Mallet-Stevens' metal desk, which I wanted to buy many years later at a New York sale. That's how I met Ronald Lauder. He wanted it too, and he got it! But he wanted to meet the man who had fought him for it at auction. We got together, and I did the interior design for his homes.

At the same time, another woman formed your taste: Madeleine Castaing...
I met her for the first time in 1968, at the Biennale des Antiquaires et des Décorateurs in Paris, where she had made a pavilion on the water. With Henri Samuel, I had learned the great French tradition of classicism. With her, it was 19th-century English and Russian furniture, poetry, patina and "reinvented" pieces. She was a magician. She used to get up late and receive people in her store in the afternoon. I bought a lot from her for the Albertine Room in Yves Saint Laurent's house in Deauville, for instance.

How was your apartment decorated?
There was a sofa by Chareau that I exchanged with Madeleine Castaing for a piece of 19th-century furniture; a François-Xavier Lalanne table I bought from Karl Lagerfeld, and the Cocodoll bed Alexandre Iolas gave me after his exhibition on the Lalannes.

Did Alexandre Iolas also play a part in your career?
I met the Lalannes through him! And he introduced me to my great client Pauline Karpidas, saying, "In Paris, you dress at Saint Laurent and have your apartment designed by Jacques Grange."

Closer to home, another person expanded your horizons: Pierre Passebon...
Of course! He made me love Noll, Royère and Gio Ponti. His curiosity stimulated my creativity, and he had a good eye. For example, he discovered the ceramist Bela Silva, who is now found with leading collectors like Terry de Gunzburg.

Terry de Gunzburg, François Pinault and the Americans we find in your book obliged you to make your peace with contemporary art. Is this a more complicated exercise?
It was a pleasure, not an obligation! It's true that interior design takes second place to a beautiful painting, but dreaming up a living room with paintings by Francis Bacon, Cy Twombly and Richard Prince—well, there are worse things in life, right? I am extremely lucky to have these clients. Most of them have become friends, and now I am working for their children!

The Bourse de Commerce, Piazza Pinault in Paris
Not to be missed
Interviews