Hervé Van der Straeten designed a collection for antique dealer Alexandre Biaggi – a match made in heaven for two people with a love of decorative arts. 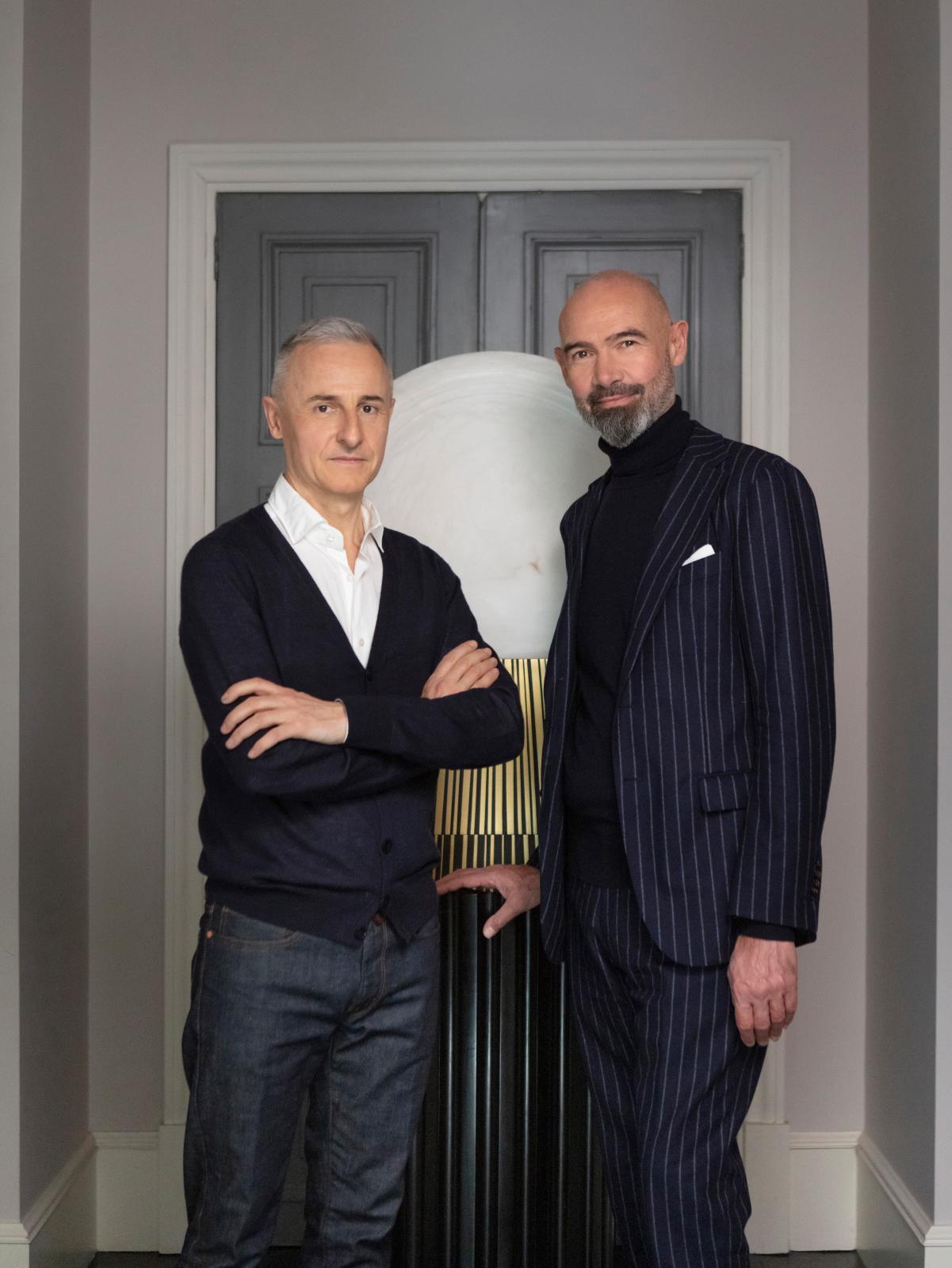 Hervé designs furniture, lighting fixtures and mirrors that are resolutely contemporary yet draw on references to historic styles. Alexandre is one of the most famous antique dealers in Paris, focusing on 20th-century decorative arts. So when he asked Hervé to design some pieces that would be sold exclusively in his gallery, the outcome was bound to be interesting, sophisticated and timeless – in a nutshell, future classics.

How did your working relationship start?
HvdS: We’ve been friends for a long time. This is a way of celebrating a 20-year relationship.
AB: In 2000, I asked Hervé to design some designs for me. It was the first time I’d ever done that. I saw his creations through my antique dealer’s eye and found that he had a sense of materials reminiscent of luxury in the 1930s-1940s and a modern way of talking about design. I was excited about the combination of both.

Was that also because it fit in with what you sold?
AB: For me it was in keeping with my profession. I like to discover things and I love design. Sure it’s exciting to find original pieces by Robsjohn-Gibbings, but working with living designers is much more enjoyable. It was also a challenge: few antique dealers made copies of original pieces 20 years ago. Nowadays everybody does it because there’s a dearth of merchandise.

But Hervé is influenced by 20th-century decorative arts, your specialty.
AB: Yes, of course. It’s natural for design to feed on the memory of styles. There’s a consistency with Hervé’s pieces, in the luxurious materials, the rarity, just as there is with a console by Frank or Dupré-Lafon.

Don't you also feel a bit like being a designer?
AB: No. I’m not involved in the design. I might make a remark or a suggestion, but I completely respect the piece. Twenty years ago, we started out with low-key things. For this anniversary, Hervé designed new, more sculptural pieces, like the spectacular Labyrinth console.

You’re both perfectionists. Does that cause any tension?
HvdS: Obsessive personalities get on very well with each other. Alexandre has an eye for details I wouldn’t necessarily have thought of. He has more of an expert’s eye, which is new for me because I’ve only had myself to rely on.

Your status as a designer is unique. You have your own workshops and gallery. Why did you make that choice?
HvdS: I started out by designing jewelry in metal and bronze, rather precious things, so moving towards more precision and luxury with furniture was in my DNA. Having my own gallery was a guarantee of freedom. But I’m also at Ralph Pucci’s in New York and every year I have a show at Karsten Greve’s in Saint-Moritz.

Did the market have any trouble accepting that "originality"?
HvdS: A little. It took a few years for things to get rolling, one show at a time. By 2004 we had outgrown the workshop. The pieces were being finished in the gallery, which, by the way, amused customers quite a bit. So I bought a place to have more room. Around 30 artisans work there today.

That’s a huge investment.
HvdS: It certainly is.

You made design luxurious.
AB: Hervé has a special place in design. He makes furniture-sculptures, some of which are one-off pieces. He has an artistic and cultured view of furniture.

You sold a pair of wardrobes for €600,000. Your niche isn’t luxury; it’s ultra luxury.
HvdS: I’m painstakingly rigorous with what I deliver. That’s how I keep my customers coming back. They’re people who can afford anything and want to be surprised. They look forward to new creations. At the show of my latest collection, the two cabinets with antique Chinese lacquer panels sold right away.
AB: My customers are like that. It’s not luxury they’re after, but rarity. Hervé’s wardrobes are one of a kind. They’re utterly refined, which has a price of course. But as an antique dealer who follows auctions, sometimes I see his pieces come up for sale. They’re more expensive than in his shop.
HvdS: One of my mirrors recently fetched €110,000 at an auction in London.

Can anything affordable still be found in your shop?
HvdS: A €1,000 candlestick!

What about you, Alexandre?
AB: The pieces by Hervé that I offer aren’t numbered but they’re signed AB-HV and can be found nowhere else but in the shop. The idea is to offer my customers exclusive, luxurious items and the possibility of requesting a different patina, like in haute couture.

Are you going to collaborate with other designers?
AB: I already have on several occasions, with Patrick Naggar, Patrice Dangel and Mauro Fabbro, and I have a project with architect Pierre Saalburg. As far as my activity as an antique dealer is concerned, I’m opening up my historical horizons even more. This morning I bought a magnificent 18th-century Italian chandelier. But this work with Hervé pushes me forward, outside the bounds of my taste. Otherwise, I’d still be with Jean-Michel Frank.

It’s a way of keeping up with the times.
HvdS: No, of being a mover in one’s times.
AB: Of simply being alive.

The Kugels: A Taste for the Beautiful
Newsfeed
See all news
Louvre Museum Opens Le Studio in October, A Place Dedicated to Exchange
UNESCO Announced the Return of the Gilgamesh Tablet to Iraq This Thursday
"Œuvres Choisies" Exhibition Ushers In the New Auction Season at Drouot
RER C Train Will Transport You to the Paris City Museums
Not to be missed
Interviews
Anne-Sophie Leclerc: A Focus on Prehistory
Anne-Sophie Leclerc leads an institution where she has worked since…
Interviews
Nazy Vassegh: Reinventing the Traditional Art Fair with…
We spoke to Nazy Vassegh in advance of the opening of the inaugural…
Interviews
Fabienne Grasser-Fulchéri: Working for a Collection Dedicated…
Labeled an art center of national interest in 2020, the Espace de…
Interviews
Camille Morineau: Promoting Women Artists of the 20th…
Curating the groundbreaking “elles@centrepompidou” in 2009-11, featuring…