Henri Loyrette: A Passion for Degas

The man who was once director of the Musée d’Orsay then president and director of the Louvre is also one of the most eminent Edgar Degas specialists. The curator of the exhibition on the artist's connections with the Paris Opera, as part of its 350th anniversary, he talks to us about the reasons for this choice. 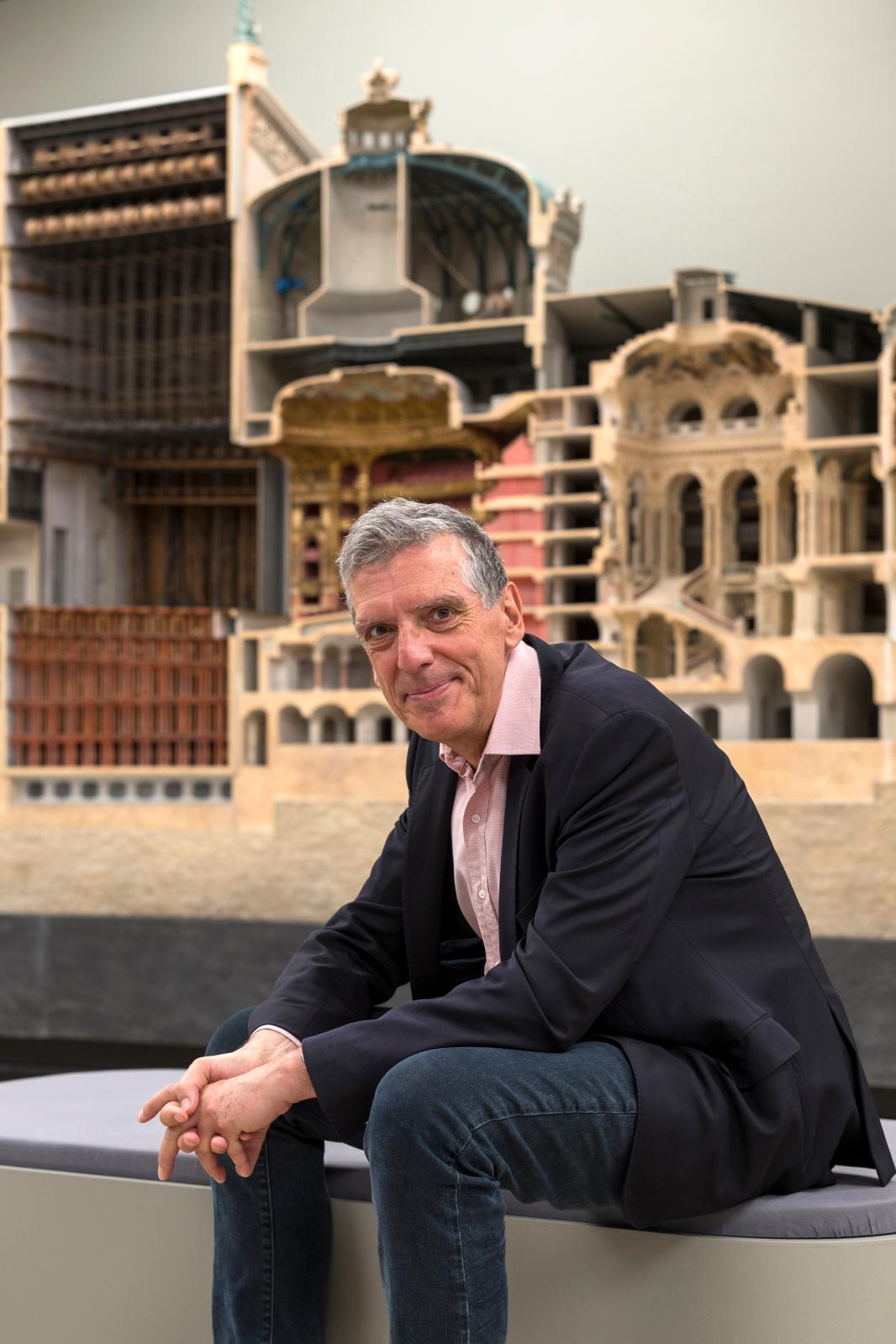 Many exhibitions have highlighted Degas' fascination with the dance world. However, none have focused on the more general aspect of the Opera. What did it represent for the artist?
It was his absolute focus, from his early pieces to the last works he produced, in around 1900. But exhibitions have always focused on the "painter of dancers" because those works were the ones that made him successful in his lifetime. So the role played by the Paris Opera as a whole was soon forgotten. Yet Degas was extremely familiar with that world. He was firstly a frequent visitor at the Rue Le Peletier studio, until it burned down in 1873, then at the Palais Garnier, inaugurated in 1875. In his work he explored the various areas – the stage, the boxes, the balcony, the studio and the rehearsal rooms – and studied the people who used them: ballerinas, musicians, singers and regular audience members prowling about backstage. All in all, his scenes at the Opera make up over 40% of his output. The first piece was exhibited at the Salon of 1868. It shows a prima ballerina of the time, Eugénie Fiocre, in a scene from the ballet La Source, by Léon Minkus and Léo Delibes. And this world continued to inspire him throughout his career, unlike other themes – portraits, racecourse scenes and landscapes – which he treated more sporadically.

Did Degas have a passion for opera as a musical genre?
Yes, totally. He was raised in a music-loving environment. His father Auguste, a Neopolitan banker, loved painting, and music even more, particularly old music, including Gluck: a taste he passed on to his son. In his Paris apartment in Rue de Mondovi, near the Tuileries, he held a musical salon, which Edgar attended. These evenings brought together amateurs and professionals like the Spanish tenor Lorenzo Pagans and Désiré Dihau, a bassoonist at the Opera. We can imagine that Edgar was introduced to this early on by his father. At any rate, his paintings prove his presence from the late 1860s. In the early 1870s, he managed to slip behind the scenes by following friends who were pillars of the establishment, including the librettist Ludovic Halévy. Later on he obtained a "three-day" subscription (for Mondays, Wednesdays and Fridays), which allowed him privileged access to the highly exclusive dance studio. But that came later, in 1885, when he was already the "painter of dancers". In fact, for Degas, the Opera simultaneously represented a musical genre he loved, a venue he visited frequently and a creative inspiration.

And it nourished his thinking…
It wasn't only a theme, it was also a toolbox and a laboratory for him. The Opera enabled him to find solutions to matters preoccupying him, like perspective, composition, lighting, movement and format. He was always seeking the most appropriate technique in a constant to-and-fro process between substance and form. This was where he produced his first monotype with his friend Ludovic Lepic, an engraver and costume designer, and where he developed his use of pastel, an ideal medium for expressing the fleeting, volatile nature of performances. He also created fans in experiments with painting on silk. Not to mention the Petite danseuse de 14 ans. In 1881, she revolutionised sculpture, as a figure in wax dressed in real clothes with real hair on her head. His explorations nourished the whole of his work.

"In his work he explored the various areas – the stage, the boxes, the balcony, the studio and the rehearsal rooms – and studied the people who used them: ballerinas, musicians, singers and regular audience members prowling about backstage. All in all, his scenes at the Opera make up over 40% of his output."

How did he work in practical terms?
Degas never painted from life, unlike his Impressionist friends. He worked in his studio from memory and using his imagination. And he got his dancer and musician models to pose, to build up graphic documentation. Because in his view, art was "falsity". This was also why the Opera was fundamental for him – because there was a connection between his artistic beliefs and this artificial world consisting of "distance and greasepaint", as he described it. His works only had the appearance of reality. He also gave them very generic titles: "ballet scene", "dance class", "rehearsal in the studio", and did not attempt to represent the premises precisely as they were. This is illustrated, for instance, in L’Orchestre de l’Opéra. Executed in 1870, this painting is a portrait of his friend Désiré Dihau. Here Degas breaks with the traditional layout of the orchestra in the pit, surrounding his friends with authentic musicians like the flautist Altès and the cellist Pilet, and mingling them with painters he knew. Likewise, his pictures never referred to specific shows, with rare exceptions, like Le Ballet de "Robert le Diable" or the portrait of Eugénie Fiocre. Here again, in this case nothing indicates that it is a ballet scene, apart from the little pink slippers laid on the floor. From the 1880s, his work became increasingly free and open. Degas depicted areas recalled from memory or freely interpreted. With the nimbleness of an opera sceneshifter, he played about with them, adding a staircase or creating hidden recesses.

What kind of audience member was he?
Thanks to archive material we have a lot of information about the shows he saw when he was a "three-day" viewer between 1885 and 1892. During this period, Degas went to the Opera one hundred and seventy-seven times; fifty-four the first year. Subsequently, his average quickly fell to around ten a year, and by 1892 his name no longer appeared in the registers. His initial enthusiasm clearly waned. This loss of interest could also be explained by the changing repertory. Degas remained attached to French grand opera. He loved Auber, Meyerbeer and Reyer, a close friend (he saw his Sigurd no fewer than thirty-seven times). But during the 1890s, a real change came over the Opera, with a new generation of composers, a new style of stage production, and Wagner reigning supreme. Degas didn't like him. This was possibly less a matter of taste than an intense anti-Germanism due to the trauma of the 1870 war, in which he had participated. In any case, as far as he was concerned the pictorial and musical avant-gardes did not sit well together.

But though he moved away from the Opera, he still went on painting its dancers.
He behaved as though he had stored up enough memories, and no longer needed fresh supplies. He still worked in his studio, drawing on his graphic documentation and memory. So the subjects tended to become confused; he painted dancers who were nudes and nudes who were dancers, and we don't know which theme they belong to. He executed synthetic pieces in charcoal on large tracing paper, as well as extraordinary paintings and pastels, which he called "colour orgies", where the stage completely disappears and the dancers are seen in extravagant landscapes. All these works are amazingly modern. Renoir said: "If Degas had stopped working in the 1880s, he would still have been a marvellous painter, but never the immense artist he finally became." I share his view.

Flavin Judd: A Duty of Memory

Quentin Bajac: From MoMA to the Jeu de Paume, the Image in All Its Forms
Newsfeed
See all news
Secrets of Rembrandt’s "The Night Watch" Revealed Its Secrets
The Obelisk in the Place de la Concorde in Paris Undergoing Restoration
Influential Critic and Essayist Greg Tate Has Died Aged 64
Boston College’s McMullen Museum Receives Gift of 30 Artworks
Not to be missed
Interviews