H is for Hardstone

Pliny the Elder attributed its invention to the Greeks. Fifteen hundred years later, the popularity of hardstone marquetry extends beyond architecture into the realm of furniture and the decorative arts. But the technique itself, which is costly and laborious, never changed. 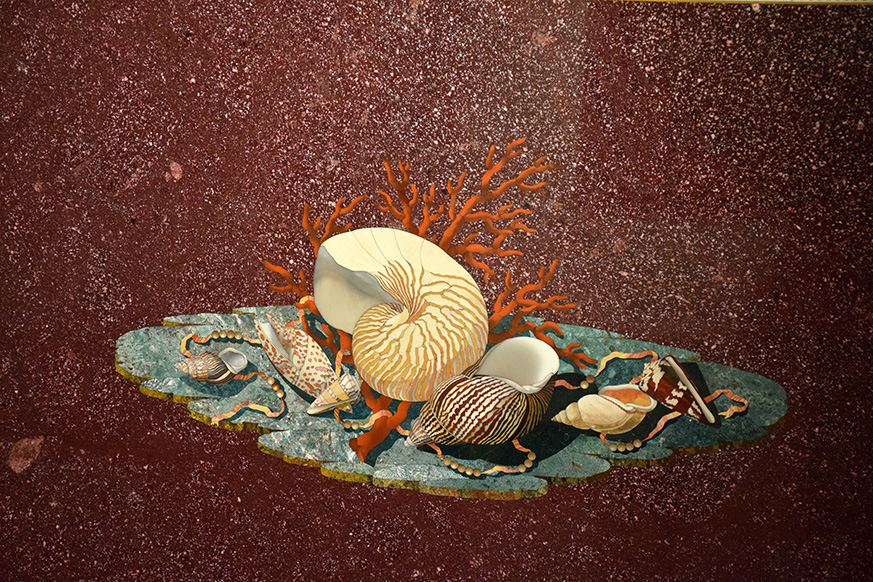 The chromatic richness of stones has always aroused wonder. The development of tools to work them opened the way to the exploitation of this mineral palette introduced during antiquity with opus sectile: a decorative technique consisting of juxtaposing different pieces of marble. Rediscovered with Roman archaeological revelations of the late 16th century, this delicate art embellished the finest Roman interiors and tabletops. The Farnese Table is probably the most outstanding prototype. The countless geometric variations that characterize Roman production during the second half of the 16th century testify to the variety of motifs imagined by the architects, or drawn from a re-emerging ancient vocabulary. This highly identifiable Roman style was produced by numerous workshops, which did not sign their output.

Many of these tables were considered as exquisite as hardstone vases. In addition, the rarity of these stones made such furniture eminently appropriate for royal and aristocratic collections. The very complexity of the technique, which has remained unchanged to the present day, only added to its extraordinary value.

Firstly, the model designed was transferred to tracing paper. Then stones, with shades and patterns corresponding to the desired effects for each design, were sliced into thin sheets three or four millimeters thick. The cutting tool used, rather like a wooden bow, had a taut wire covered in abrasive substance. Once cut, the sheets were glued to a slate support to strengthen them. Then the elements on the tracing paper were applied, and the bow was used again to cut out the desired forms. The resulting puzzle was then assembled with rosin or beeswax. Finally, the design was once again traced and reproduced on the marble base. Each motif was hollowed out so those hardstone elements could be slotted in. These were glued on the back, while the front was carefully polished with agate and emery paper, and then waxed.

In the late 16th century, Florentine work took a different direction, replacing marble with gemstones and abandoning geometry for an adaptation to contemporary painting. It soon became known as "Florentine mosaic". The mineral art aroused a passion in Cosimo I and above all Ferdinand I that led to the creation of the Opificio delle pietre dure in 1588. These workshops entirely dedicated to commesso – the name given to this "painting in stones" – aimed to use the polychromy of minerals to rival painting and, like it, to treat a wide range of subjects from portraits to landscapes, including biblical subjects. In the 17th century, Tuscan taste preferred fruit-laden branches and multicolored birds, before moving on to vedute and historical scenes in the 18th century. The Medicis dazzled European courts with these works, which coveted these priceless works - offered as diplomatic gifts. Workshops were founded by European monarchs to lure craftsmen away, like Rudolph of Habsburg (1552-1612) in Prague, and Charles III (1716-1788) in Naples (where neoclassicism reigned supreme) and then in Madrid, where the Buen Retiro workshops produced virtuosic trompe-l’œil pieces.

France succumbed to the art under Louis XIV (1638-1715). The Gobelins workshop welcomed several Italian craftsmen, including the Megliorini brothers. The king, who possessed Europe's richest collection of hardstone vases (with a thousand pieces), developed a passion for these inlaid panels, intended for ceremonial furniture. In 1680, however, his majesty tired of them and the workshop closed its doors in 1715. At the major sales of the royal furnishings in 1741 and 1752, marchands merciers treated the hardstone panels in the same way as those embellished with Boulle marquetry. The panels were cut up and reused, eventually undergoing a glorious rebirth with the arrival of the Neoclassical taste. Florence continued to lead the way, and the Opificio constantly supplied appreciative art lovers. In the 18th and 19th centuries, commesso began to appear on jewelry boxes. Later, it was imitated in a cheaper version using scagliola, glass or colored wax. By the end of the 19th century it had run its course; the Opificio stopped producing it and devoted itself to restoring the finest pieces of pietre dure, which it continues to do today. It also houses an important museum dedicated to this art.

Worth seeing: The marble and hardstone floral tabletop created in Florence in 1668, now in the Musée du Louvre's collections and currently on loan to Louvre-Lens.

S as in Sulphide
Newsfeed
See all news
The Enigmatic Jacobus Vrel: Vermeer’s True Inspiration? Explored in Forthcoming Book and Exhibition
Conservative Donor Appointed Chair of London’s National Gallery
Academy Museum of Motion Pictures to Open in LA
Painting Created Outside Minneapolis Courthouse During Verdict of George Floyd Trial Up for Auction
Not to be missed
Glossary
M is for Mother-of-Pearl
In the sixth century, its iridescent nuances were already enlivening…
Glossary
A is for Azulejos
Unlike what might be commonly thought, azulejos take their name…
Glossary
M for Marbling
In the 12 th century, the Japanese art of "ink floating on water"…
Glossary
B for Bottle
Among all the existing containers, the cylindrical shape with its…