A 2007 painting by German artist Günther Förg, extremely rare in the French market, should set off fireworks. 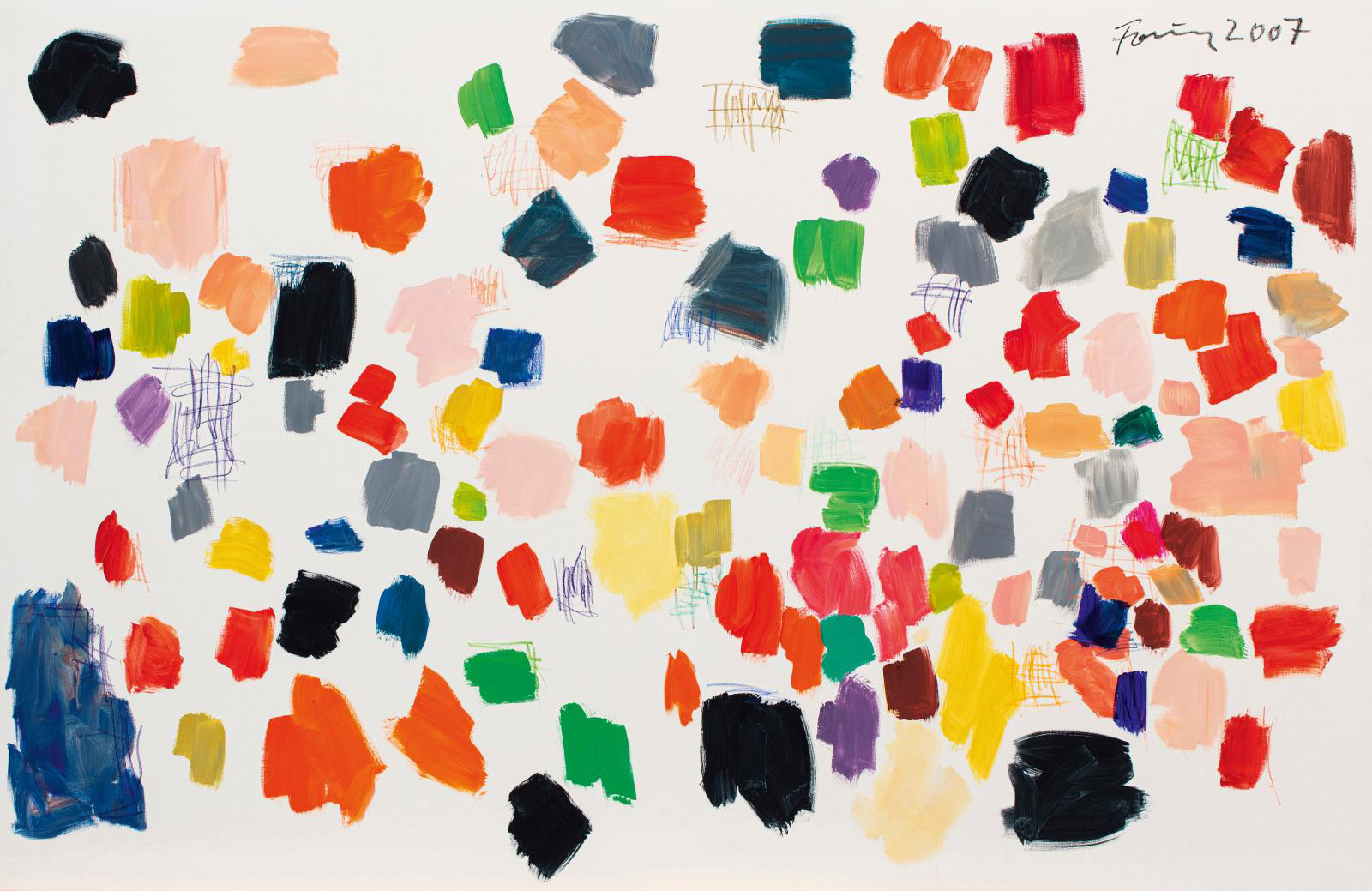 This 2007 acrylic and chalk on canvas by Günther Förg (1953-2013) features simple spots of color freely spread out across the canvas. Major works of his are rare in the French market; the first ranks 22nd in his Artnet rankings. Needless to say, this composition will most likely be closely watched. When he made it, Förg was starting his last series, the Spot Paintings. He has been considered one of the foremost German artists of the post-war generation for nearly 30 years. As a very young man, he developed an experimental, provocative approach combining abstraction and expressionism, seeking ideas in architecture while opening up to photography and sculpture. He strongly opposed figurative painting, then predominant in Germany. After his first canvases in the 1970s—black monochromes on which he added a layer of translucent grey—he enriched his palette early in the following decade, following in the wake of the color field paintings by his American counterparts, notably Mark Rothko and Barnett Newman, but without sharing their metaphysical aspirations. In the catalog of the exhibition that the San Francisco Museum of Modern Art devoted to his work in 1989, Paul Schimmel wrote: “Work with this language (abstraction), which in the 20th century was described as spiritual, religious, symbolic, deeply universal and mythical, does not seem to be part of Förg’s reality… There is no other meaning than the thing itself.” Orderly geometric shapes govern his work, which is often described as minimalist. In the early 2000s he changed course: moving away from a certain rigor, his strokes became freer. Förg softened forms and gave birth to almost organic patterns, a constellation of colorful, sharp strokes. His discovery of photographs of Francis Bacon's London studio affirmed his artistic process. Indeed, Bacon used to rub his brushes on walls and doors to clean them. This practice echoes his own method of calculating the value of a color by dabbing the pigment on his brush on a surface of paper or fabric. The dynamism and a certain sensuality of his works seduce, they are hung in the most important international institutions in contemporary art, from the MOCA in Los Angeles to the Tate Britain in London and the MOMA in New York. In which sky will this one shine? The answer is bound to be colorful on December 2nd.

Print the article
Newsfeed
See all news
Soissons' Cathedral of Saint-Gervais-et-Saint-Protais Gets Its Rose Window Back by the End of the Year
Ancient Egyptian Road, Buried for Centuries, Uncovered in Lavish Ceremony
The Mystery Behind This Chinese Painting, About to Go Under the Hammer
Finalists of MAXXI Bulgari Prize Announced
Not to be missed
Spotlight
An Invitation to the Ball with Magnificent Evening…
A wardrobe in exceptional condition takes us back to the splendors…
Spotlight
Eugène Gaillard, Samuel Bing and Émile Gérard:…
The destiny of three men converged on this iconic piece of Art Nouveau…
Spotlight
First Appearance at Auction of a "Saint Peter"…
A splendid find—a Ribera in fine condition, signed, dated and with…
Spotlight
The Romantic Treasures of the Pierre Collin L…
Some 300 books form the collection of Romantic illustrated books…