No sign of any Cimabues hiding in any kitchens in 2021—though the year is still young—but instead, two little Late Gothic works never yet seen at auction, attributed to Bartoldo di Fredi and Michele Giambono, in boxes from the beginning of the last century. 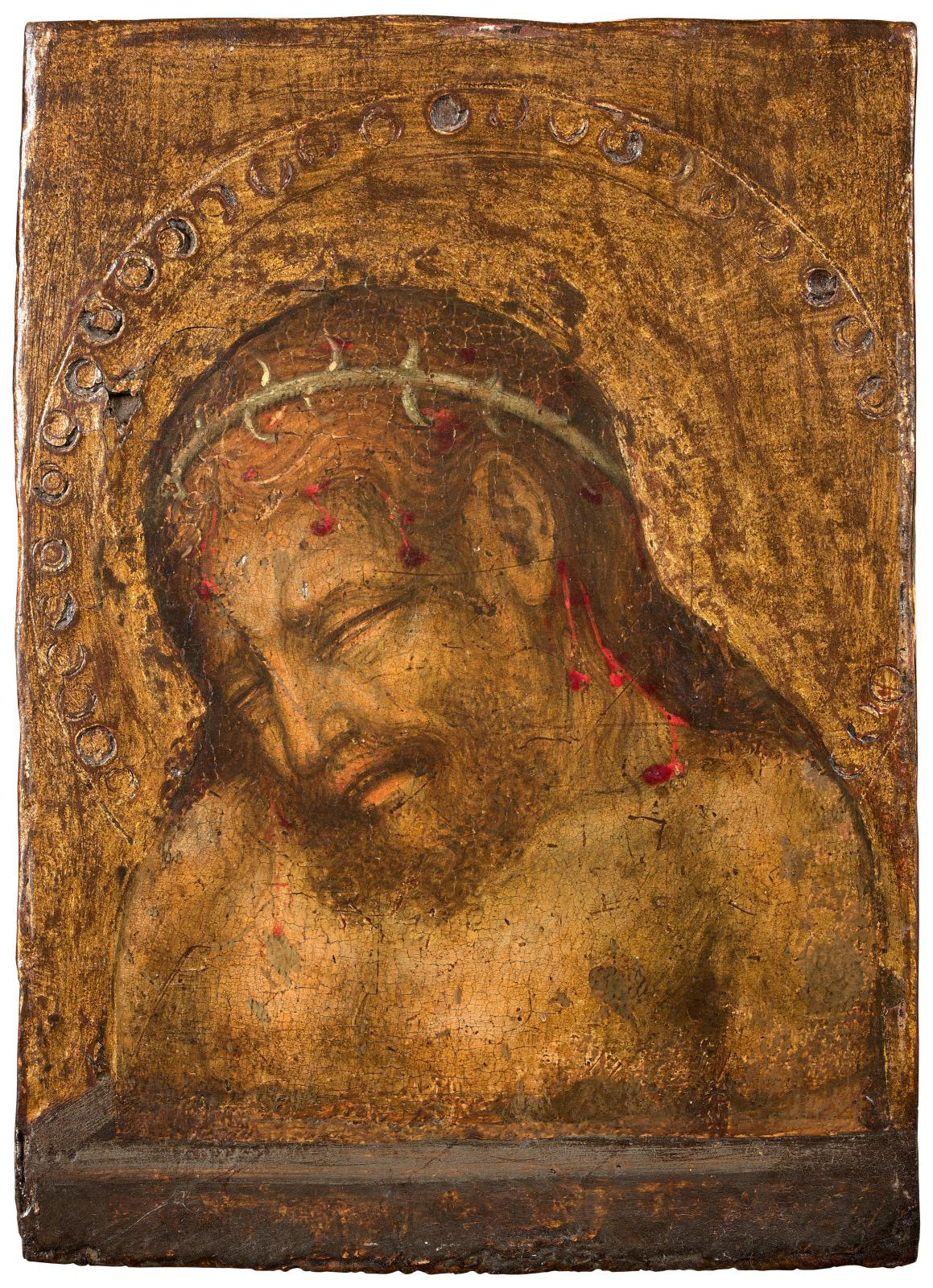 The two Late Gothic panels from Poitiers will never reveal their full stories, which remain well-kept secrets. A receipt indicates that the works were bought from "E. Vinot" in 1936. On the back of Saint Anthony the Abbot, the inscription followed by the date 1881 and the unidentifiable red wax seal might one day yield more information, but as with the Cimabue – sold in a public auction in France at 24 M€ – we are reduced to mere theorizing. In which minor chapel, warehouse or attic did they languish for an age before being cut up for more appealing presentation by suppliers eager to meet the craze for these Gothic works? Were they acquired in situ as souvenirs of the Grand Tour, or brought back by dealers from one of their trips around Italy? And when precisely? Not all Late Gothic works came from the sale of Cardinal Fesch's collection! There is every reason to believe they were transformed and scattered in the late 18th or early 19th century when these artists began to attract the attention of pioneers led by Lanzi, Artaud de Montor, Von Rumhor and Séroux d'Agincourt, followed by Cacault and Fesch, and later Campana. Their collection encouraged a host of dealers, mostly Florentine and Roman, to go and plumb the collections of churches in the Italian provinces, where the local clergy were only too happy to sell these outmoded Gothic pictures for a song.

Provenances of Long Date
Within a few decades, this taste was no longer restricted to an elite of impassioned scholars and took on a whole new dimension. Italian dealers and artists were overwhelmed by demand. But the two works from Poitiers speak volumes in terms of how far they go back. Because of its trapezoidal shape with a multifoiled ogival arch, Saint Anthony the Abbot is very probably part of the intermediate register (between the main panels and the pinnacles) of a Sienese altarpiece by Bartolo di Fredi: the trefoil-shaped awl used to emphasize the edges of the arch is identical to one he used with several other paintings. The Turquin auction house suggests a comparison with two other works made in the 1380s for the Church of San Francesco in Montalcino: the Griffi-Cacciati altarpiece commissioned for St. Peter's Chapel (now divided between the Museo Comunale in Lucignano and the Pinacoteca in Siena) and the polyptych of The Coronation of the Virgin from the Chapel of the Annunciation, whose central part is now in the Museo Civico e Diocesano d'Arte Sacra in Montalcino, while various other panels are in the Los Angeles County Museum of Art, the Vatican Museums, the Polesden Lacey museum in England, and Warsaw. Art historians have long been working to identify another altarpiece by Bartolo di Fredi: a St. Stephen is now in the Victoria and Albert Museum, a St. Lucy in the Ashmolean in Oxford, and a St. Catherine in Altenburg. The Poitiers panel should open up new scope for research, and we can only hope that its companions will gradually turn up in the coming years. Already, the subject suggests that it comes from an altarpiece intended for a hospital foundation. Might it consist of another altarpiece commissioned by the Cacciati family, who had links with the Hospital of the Misericordia in Montalcino, as suggested by Turquin?

The Man of Sorrows is perhaps less mysterious. The expert sees similarities in this fragment of a devotional panel—cut on all four sides—with two works by Michele Giambono now in the Emo Capodilista collection in Padua and the Metropolitan Museum of Art. The Christ is characterized by the same expression of suffering, the same wounds and the same crown. The Metropolitan's panel, by far the most refined, shows him down to the waist with his arms stretched out by his sides, showing his stigmata, while a miniature St. Francis is positioned on his left. It is tempting to conjecture that if the Poitiers Christ had been accompanied by a saint, the latter would have been cut away to create two works. The Musée du Petit Palais in Avignon, for example, has a 13th-century head of Christ whose left arm, along with St. John, is now in the Museu Nacional de Belas Artes in Rio de Janeiro. Nothing is impossible.

Dedicated Research
These two panels, cut up and thus reinvented, were mounted in early 20th century boxes lined with green and purple velvet, labeled with French notices: a process that certainly took place in two stages, and perhaps at an interval of several decades. These very old-fashioned and now rare boxes evoke names like Nélie Jacquemart and Isabella Stewart Gardner, and particularly the novel En route by Joris-Karl Huysmans, in which the protagonist, Durtal, comes to his faith through this mystical style of painting, and where he imagines an ideal church decorated with "paintings by Fra Angelico, Memling, Grünewald, Gerard David, Rogier van der Weyden, Bouts and others." There are also resonances with Swan's Way, in which Proust talks about Giotto, Angelico and Benozzo Gozzoli—for, within their showcases, these panels 14th and 15th-century panels embody a lost time...