Late 2020 proved a fertile period for the Musée d’Art Hyacinthe-Rigaud, when the collection dedicated to the Neo-Impressionist took on several new additions: preemptions illustrating not only his great art but also his immense devotion to Gauguin. 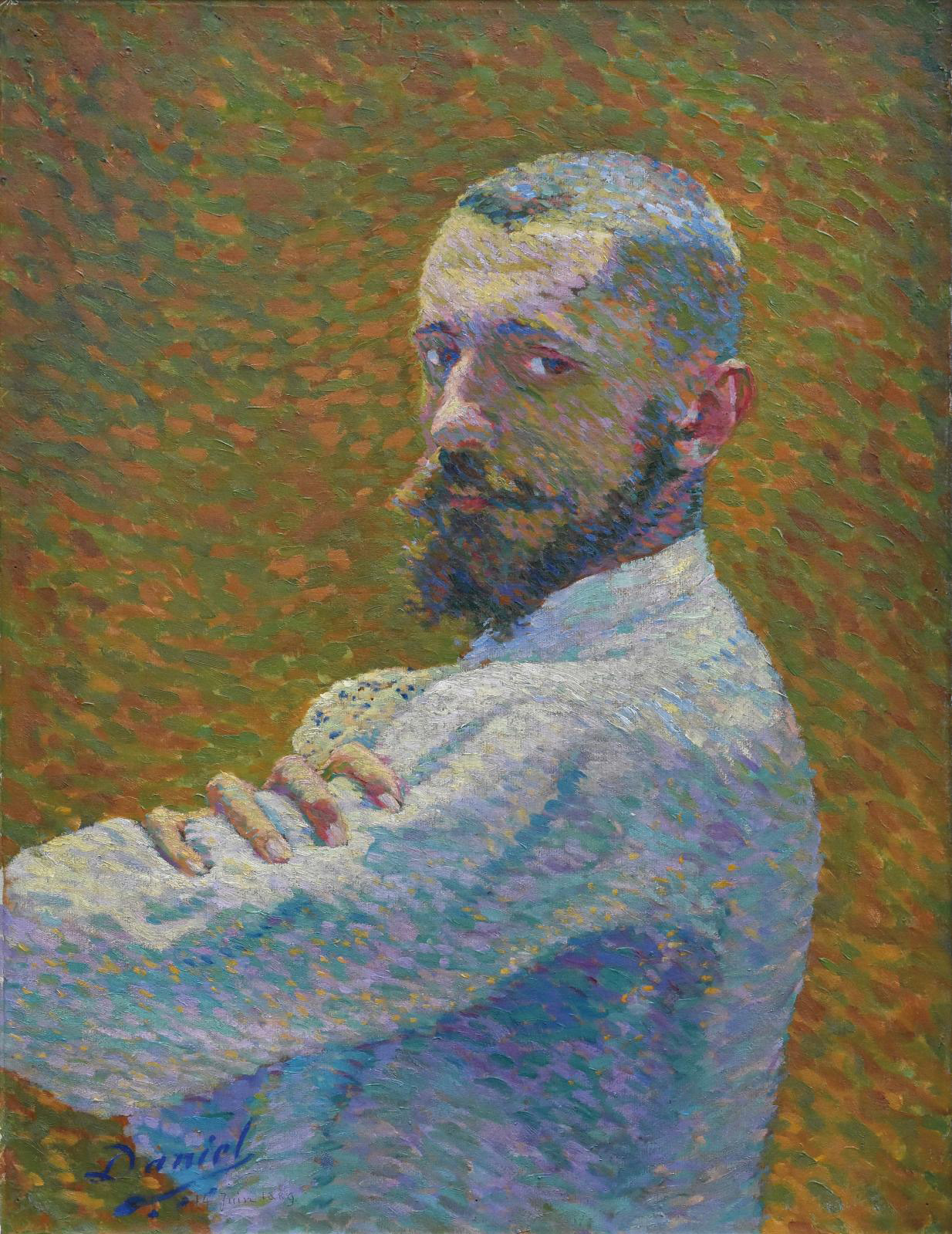 On December 3, several key pieces evoking the life and work of George-Daniel de Monfreid (1856-1929), the painter and champion of modern art, left the Gironde region to join the Musée Hyacinthe-Rigaud in Perpignan (Southern France). That day, the Jean Dit Cazaux & Associés auction house of Bordeaux sold the collection that had hitherto remained in the family of the Neo-Impressionist painter and his son Henry (1879-1974), a writer famous for his adventures in the Red Sea. Using the preemption mechanism, the Perpignan institution thus acquired three exceptional lots: the 1889 painting Autoportrait à la veste blanche (Self-Portrait with White Jacket) for €90,376; the twenty-six woodcuts he produced for Noa Noa (Paul Gauguin's journal during his first trip to Tahiti), for €25,280, and ninety-five notebooks well-filled by Monfreid from 1896 to 1929: a mine of information on both the artist and the artistic milieu of his time (€11,502).

A methodical acquisition policy
Distinctly active during this sluggish year, the Roussillon museum had already exercised its right of preemption a few weeks before. On October 25, 2020, again in Bordeaux (this time with the Bordeaux Quinconces auction house), it had bought another work by a "local boy", the great Hyacinthe Rigaud: the magnificent Portrait de femme ou présumé de Charlotte de Fleury de La Jonchère (Portrait of a Woman, Presumed to be Charlotte de Fleury de La Jonchère), for €123,000. The painter of Kings of France, born in Perpignan on July 18, 1659, has always been central to the collections of the museum named after him, and the focus of its purchases—an acquisition policy ramped up when the museum reopened in June 2017. With this in view, the city had already bought three new Rigauds: portraits of Monsieur Antoine Rousseau and his wife, and the portrait of Gaspard Rigaud, the painter's brother, one of the masterpieces of the redesigned circuit. But in this respect, 2020 was an outstanding vintage. As we learn from Pascale Picard, the museum's director, "the City of Perpignan invested no less than €270,000 in buying artworks last year—with a grant from the Heritage Fund for the Monfreid acquisitions." In any event, this is a significant budget item, and one the new municipal council, elected last July, aims to maintain.

Monfreid: guardian of Gauguin's memory
As luck would have it, the pieces that resurfaced in Bordeaux unexpectedly swelled the collection dedicated to George-Daniel de Monfreid. "For our part, we were very keen to develop the section dedicated to him through new acquisitions," says Pascale Picard. This large-scale project is justified by the artist's key role in the history of modern art. Born in New York on March 14, 1856, the future painter grew up in southern France between Catalonia and Languedoc: a region whose unfiltered light marked him for life. Fascinated by drawing, he entered the Académie Julian in Paris in 1876. Then, eleven years later, his meeting with Paul Gauguin dramatically changed his life and art. In 1889, Gauguin suggested he participate in the hang of dissident artists at the Café Volpini, just across the street from the Universal Exhibition. The paintings he contributed included Autoportrait à la veste blanche, a historical piece vibrant with the divisionist technique then being explored by its creator. And when Gauguin left for Tahiti in 1891, he asked Monfreid to be his agent and manage his affairs in France, including selling his paintings. One of Monfreid's few customers was the prominent aesthete Gustave Fayet, who with his help assembled the first—and most extraordinary—collection of works by the master of Pont-Aven. Throughout his life, the artist, the executor of his friend's will, loyally protected the memory of the man now far away in the Marquesas. Moreover, he entrusted nobody else with the famous woodcuts for Noa Noa, when this seminal manuscript was published by Crès in 1924. Monfreid's devotion is encapsulated in a major painting now in the Perpignan museum: the 1925 Hommage à Gauguin. Behind Monfreid and his wife Annette, placed in the foreground, can be seen a self-portrait of the theorist of synthetism, next to one of his enigmatic Tahitian sculptures.

A tribute to a champion of modernism
In 1903, George-Daniel de Monfreid moved permanently to Corneilla-de-Conflent, in the Pyrénées-Orientales, and was a catalyst in the spread of modern art in the Roussillon region. At the heart of a circle of regional artists who included Aristide Maillol and Etienne Terrus, he was a key figure whom young artists staying in the region would not miss visiting for the world. One was Henri Matisse in 1905, who came as a neighbor from Collioure—home of the burgeoning Fauvism—and to whom he showed Gauguin's sculptures. The artist deserves real recognition from all these points of view, and while the Palais des Archevêques in Narbonne honored him in 2016 with his first monograph exhibition, the Hyacinthe-Rigaud Museum has scheduled a new retrospective for 2022. It will include the recently pre-empted works, because, as Pascale Picard says, "the museum's management is very keen to shore up all its acquisitions with annual exhibition projects."

Jeanne Paquin and Georges Barbier: A Remarkable Duo
Newsfeed
See all news
The YBCA 10: Racial Equality and Climate Justice Fellowships
Corona-Proof Hug: World Press Photo 2021
David Zwirner Heads to Hollywood
Black Cultural Archives Resign Following Controversial UK Racism Report
Not to be missed
Market Trends
Art Market Overview: The Consecration of Claire Tabouret…
Claire Tabouret (b.1981) has just become the art market’s highest-priced…
Market Trends
Van Gogh: An Auction Rollercoaster
The auction of this view of Montmartre was beset by a series of…
Market Trends
NFTs: What Are People Really Buying?
p rices for NFTs have skyrocketed in recent weeks, but huge misunderstandings…
Market Trends
The Art Market by UBS and Art Basel: 2020 Could Have…
A big drop, it's true, but not a collapse. The art market seems…