This term, covering both the material and the technique, applies to the denticle-covered skins of stingrays and sharks. Initially used as an abrasive, galuchat (or shagreen) amazed the West when it arrived from Japan, covering highly refined objects. 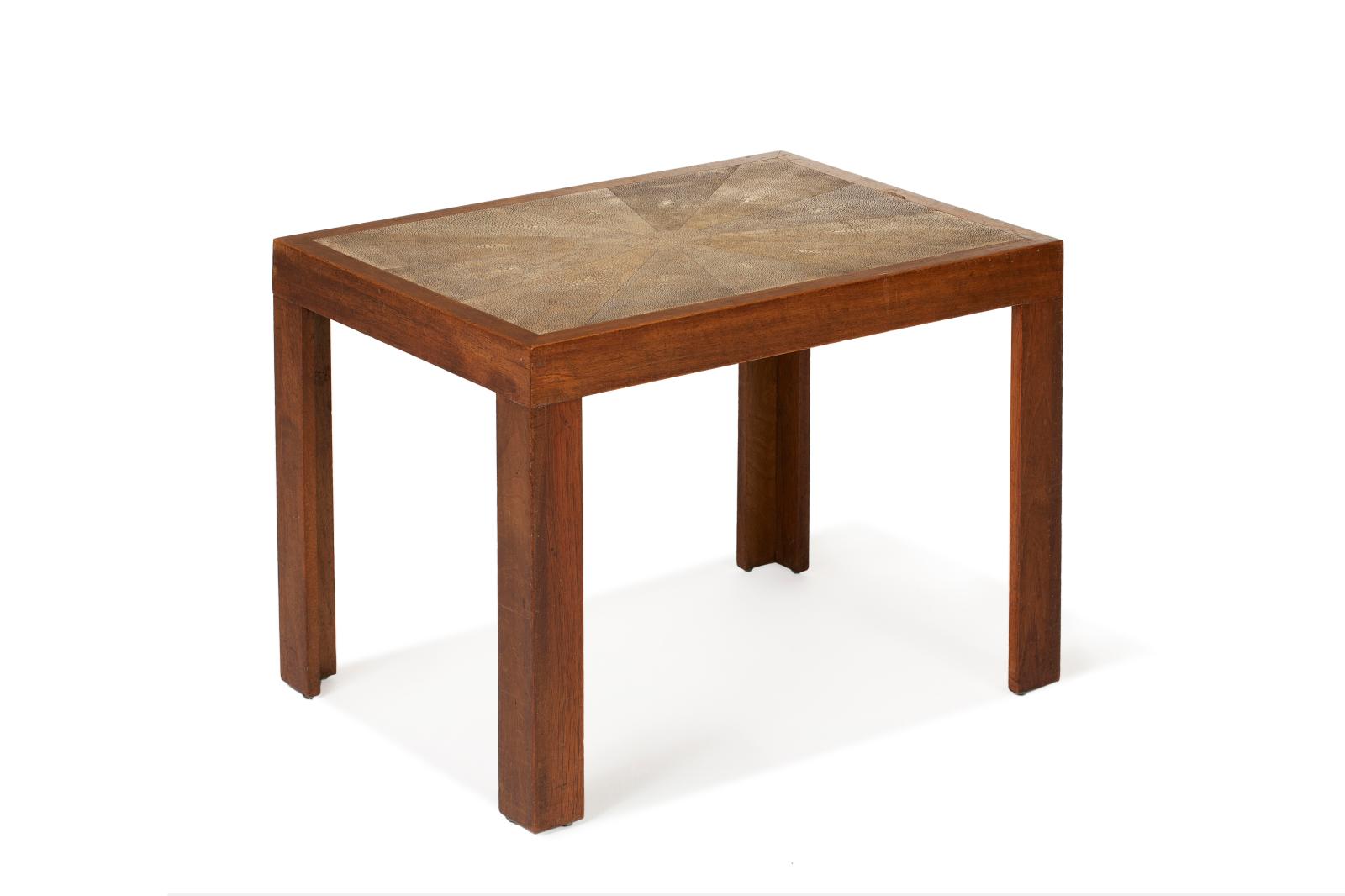 The art of galuchat first appeared in China and was developed in Japan during the 8th century. Through Portuguese merchants, Europe discovered it in the 16th century, inlaid in lacquered furniture especially created for its elite classes. While uncompromising Japanese customers selected skins for the beautiful natural layout of the denticles, the same-nuri technique employed with items for export made use of rejected skins. In both cases, the skin was softened in lukewarm water, then dried and sanded. However, same-nuri required the skin to decompose completely after sanding to recover the denticles, which were then sprinkled onto fresh lacquer, covering the surfaces of furniture designed for export and imitating the nashiji lacquer technique far more cheaply. Only very few same-nuri reached Europe, making galuchat a highly desirable luxury. For a long time, variations in the skin's collagen content influenced the dye used with shark and ray leathers, which can be told apart by the form of the denticles.

Jean-Claude Galluchat's Invention in the 18th Century
Jean-Claude Galluchat (1689-1774) ran a "boutique de gaisnier" (sheath shop) near the Bastille. In around 1748, he invented a tanning and dyeing process making it easier to cover small objects with the skin, which he finished off with a vernis Martin to give them the brilliance of magnificent Japanese lacquers. The technique (which dropped an "L" from the craftsman's name) ensured his posterity and brought him lucrative royal favours: La Pompadour could not get enough of it, and Marie-Antoinette was wild about it. However, there are no works signed by this craftsman and no objects were attributed to him.

Art Deco Revival
Galuchat went out of fashion for a time, but its pedigree was naturally restored by Art Deco. Clément Rousseau (1872-1950) and Paul Iribe (1883-1935) explored this delicate art, blending modern techniques with the Japanese style. With elegant lines, fine cutting with a diamond-coated wheel and refined dyes, the skin was used to cover entire pieces of furniture. This material, imitated since the late 19th century by varnishes and printed papers and leathers, is now often replaced by convincing resins much admired in high-end furniture.

H is for Hardstone

6 Questions for Maxime Flatry
Newsfeed
See all news
Preemption: A Historic Model of the Holy Sepulchre Goes to the Louvre
A New Website for Contemporary Art Centers in France
Art Nouveau in the Spotlight at the Next BRAFA
Egyptian Archaeologists Demand the Return of the Rosetta Stone
Not to be missed
Glossary