Dutch art historian and collector Frits Lugt died fifty years ago. The Fondation Custodia he created in Paris houses one of the most extensive collections of drawings, prints and artist's letters in private hands. An institution that is more active than ever. 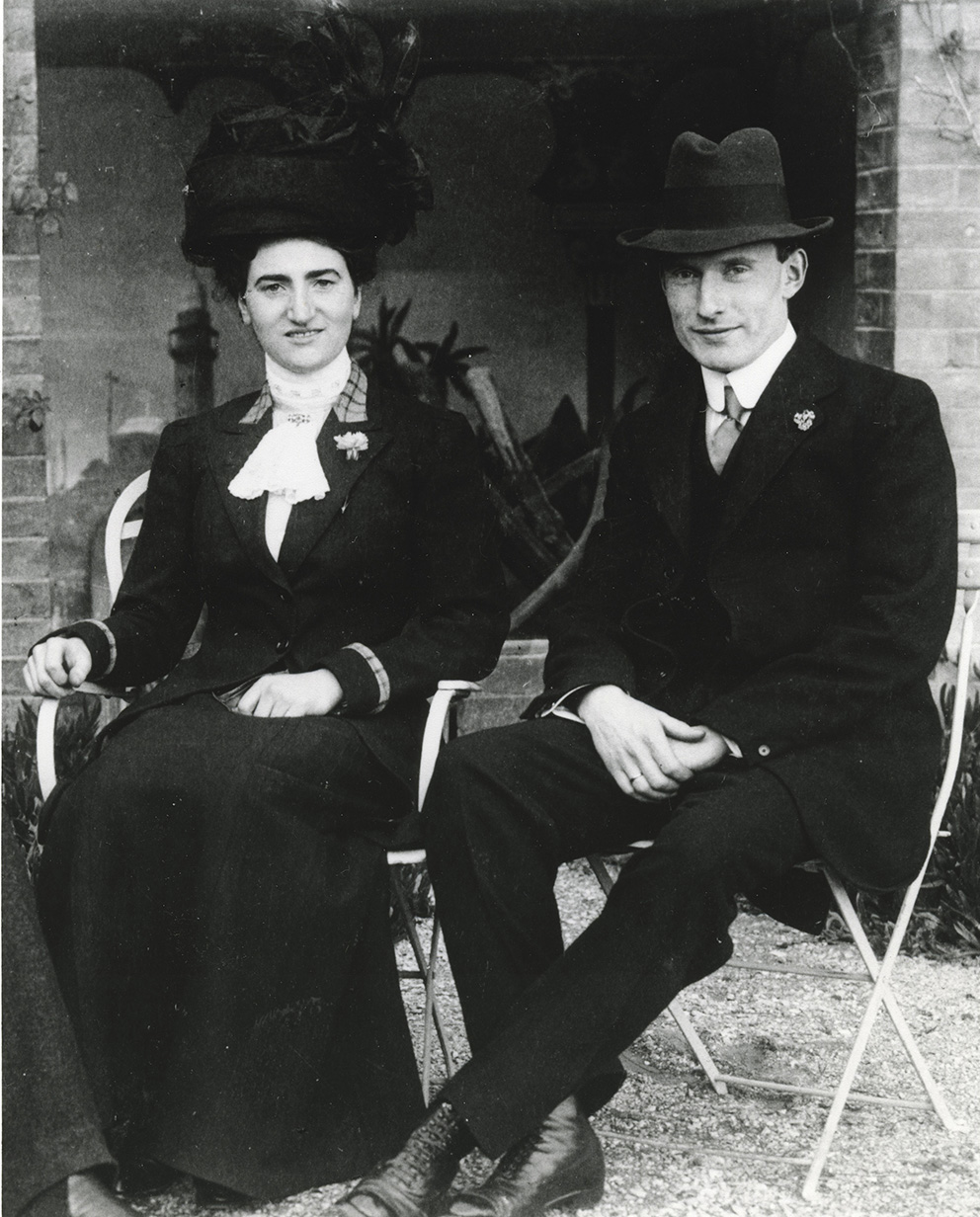 On July 15, 1970, by a sad stroke of fate, Frits Lugt had a heart attack and collapsed in Place de la Concorde, Paris. It was Rembrandt's birthday: a painter this Dutchman adored. The young Frits caught the collector's bug very early on. While most children collect key rings, beans or marbles, Lugt Junior showed admirable singularity from the age of 8, proudly hanging a sign on his bedroom door that said "The museum is open if the director is at home."  Promising! The boy listed all his treasures in a tiny notebook, where each trophy was described and numbered: a stone from the Saint-Merri cloister, seashells, a ball, a souvenir of the Battle of Waterloo. Already, we see a powerful drive to classify and list. He was 14 in 1898 when he visited the Rembrandt exhibition staged at the Stedelijk Museum in Amsterdam to celebrate Queen Wilhelmine's coronation. He was blown away! Eager to see the master's drawings and etchings over and over again, the boy haunted the Rijksmuseum every Wednesday and Saturday. A year later, he wrote a biography of Rembrandt, skillfully sketching the illustrations himself.

Close to Creators
Fortunately, Frits had loving and imaginative parents. Conscious of their son's originality, they allowed him to leave school in the eighth grade. The teenager was hired by the auction house Frederik Muller & Cie. And this was how he learned: on the job—for the self-taught Lugt had no academic training. At the age of 26, he became a partner, but his independent spirit soon drove him to leave. In 1910, he was smart enough to wed a future heiress, Jacoba Klever, nicknamed To: the only daughter of one of the shareholders of Steenkolen Handels Vereniging, now SHV Holdings, a huge gas distribution company. His wife shared his love of art and collecting, a small miracle. Her father, impressed by his son-in-law's flair, lent him money, enabling him to buy artworks he then sold. The happy couple had five children, plus a few thousand drawings and prints. A drawing on a sheet was what moved this art lover more than anything. Gazing at a sketch or a preparatory study made him feel as close to the creator's thoughts as it was possible to be. Hand in hand, To and Frits Lugt traveled all over Europe, exploring museums and auction houses. If anyone asked their daughter Irene "What does your daddy do?" she would answer: "I can't describe it; anyway, he's never there." In the 1920s and 1930s, he collected a swathe of Old Master drawings at reasonable prices.

An Ardent Esthete
Lugt had a sharp eye and considerable determination. He found twenty-one drawings by Rembrandt, fourteen studies by Rubens, and almost as many marvels by Van Dyck. The esthete did not confine himself to the Flemish and Dutch Schools, but also hunted down French and Italian drawings dating from the 15th to the 18th centuries. He loved illustrious masters and unknown artists alike. But if a piece by Watteau was already expensive, he was prepared to spend huge sums, especially if the work had passed through the hands of a well-known connoisseur. He kept his finds in large, tooled leather albums, as in bygone times, watching over his precious collections with the same feverish devotion. Nothing in his appearance suggested his ardor. A handsome, austere man, his taste was not for good food, but books on philosophy and religion. He always avoided buying one particular picture by Rembrandt: Le Lit à la française (The French-style Bed). An erotic scene—sex? Shock, horror!

An Extraordinary Visual Memory
In the satchel he carried around, Lugt always had one or two works he could bargain with, just in case…  "He even managed to barter with museums in Bremen, Munich and Vienna," says Ger Luijten, the Fondation Custodia's brilliant director. "It was unheard of! He was hyper-organized, and possessed a phenomenal visual memory." The provenance of works and their journeys through the ages fascinated him. He wrote a major study, Les marques de collections des dessins et d'estampes: an inventory of the stamps affixed by owners to graphic works as a sign of possession and pride. What a goldmine! The book was published in 1921, followed by a supplement in 1956. Meanwhile, his huge Répertoire des catalogues de ventes, a list of sales catalogs begun in 1925, occupied him until the end of his life. "Frits Lugt is the most frequently cited art historian in the world," says Ger Luijten admiringly. Our hero also sought out Indian miniatures, believing them to have inspired Rembrandt. And the Dutch master spawned another new passion, this time for artists' correspondence, after Lugt discovered two authentic letters from him in an auction (and paid a colossal sum for them).

Open to the Public
How can collectors prevent their life's work from being sold off piecemeal by their descendants? During the Second World War, when Lugt and his family moved to the US, the Dutchman learned about the endowment funds set up by Frick, Barnes, Pierpont Morgan and other billionaire collectors. After the war, To and Frits Lugt-Klever duly decided to create a foundation in Paris. Tough luck for their heirs! But why France, not the Netherlands? "As their house in The Hague had been occupied and damaged by the Germans, they didn't have the heart to go back there," says ger Luitjen. "Lugt was a Francophile who knew Paris well, having worked there when he was compiling the catalogue raisonné of Dutch and Flemish drawings of the Louvre, the Bibliothèque Nationale and the École des Beaux-arts." To house their institution, the couple bought two private mansions in Rue de Lille, separated by a courtyard: the Hôtels Turgot and Lévis-Mirepoix. While they lived not far away in Place du Palais-Bourbon, their collection was comfortably ensconced in an 18th-century residence sporting antique furniture and Chinese porcelain. As the walls looked somewhat bare, this gave Frits the perfect excuse to go and hunt for paintings. No large allegorical frescoes for him: he preferred landscapes, genre scenes, church interiors and still lifes—intimacy, in short. He had a liking for atypical subjects in an artist's output. For instance, French painter Nicolas de Largillière, famous for his portraits, is represented by an unexpected trompe-l'oeil with bunches of grapes.

Their foundation, created in 1947, was named Custodia: the Latin word for "protection". There is nothing antiquated here. Successive directors have been keen to keep the collection alive by adding to it. Frits Lugt assembled several hundred letters from artists, but the collection now contains a spanking 60,000, including illustrated documents signed by Degas, Gauguin and Manet. He had avoided 19th-century artists, probably because he felt they were too close: these gaps are now being filled. The library with its 130,000 volumes is a haven for researchers. The famous "collectors' stamps" have been put online. Long known to only a few, this independent museum is now reaching out to a wide public under the leadership of Ger Luitjen, a warm and engaging figure who comes from the Rijksmuseum. Temporary exhibitions are regularly laid on; the next one, entitled "Sur le motif. Peindre en plein air, 1780-1870" ("From life. Outdoor painting, 1780-1870"), is a breath of fresh air planned for the fall of 2021. To and Frits Lugt can sleep soundly: they have not been betrayed.

The Curtain Rises on a Drawing by Paul Cézanne
Newsfeed
See all news
Paris: Open House at the Père Lachaise Workshops
Preemption: Romanelli's "Justice" Is Heading the Musée du Grand Siècle
A Diamond Cross Pendant Fetches €673,100 at Drouot
London: Will the "Portrait of Omai" Enter the Collection of the National Portrait Gallery?
Not to be missed
Analyses