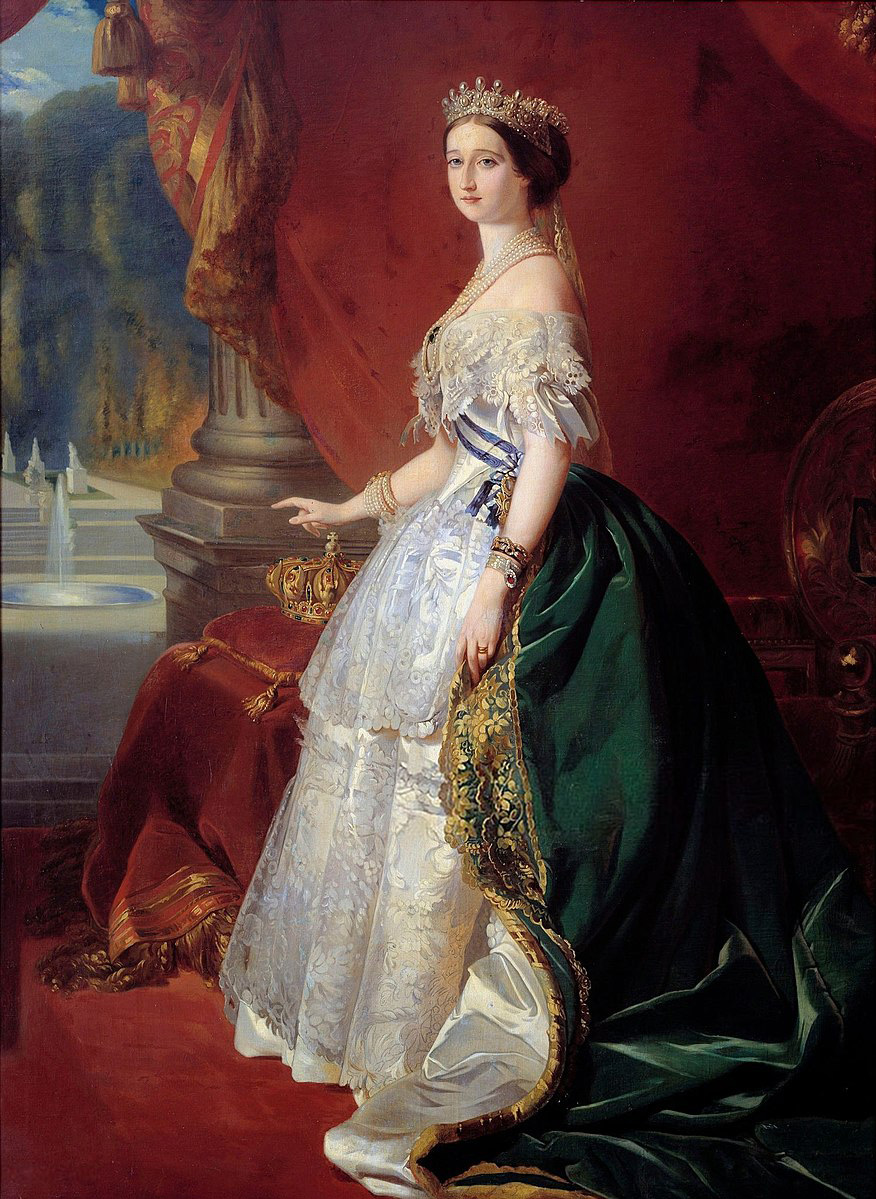 Eugénie, a legendary beauty and accomplished sportswoman, fluent in French, Spanish and English, soon silenced her detractors. She became a celebrity influencer and a trendsetting fashionista of her day who strategically deployed her patronage to advance her reputation at home and abroad.

Eugénie & Marie-Antoinette: From Royal to Imperial Elegance
A staunch and practicing Catholic, deeply inspired by her faith, Eugénie became an extraordinary patroness of charities that benefited women, promoted female education and engaged in social reforms. At the same time, she decided to revive Queen Marie-Antoinette’s artistic legacy. Why did Eugénie, a proto-feminist, turn to Marie-Antoinette as a model for her patronage of the arts? Following the execution of Marie-Antoinette in 1793, her former brothers-in-law, Louis XVIII (1814-1824) and Charles X (1824-1830) explicitly conceived projects, like the Chapelle Expiatoire (Expiatory Chapel, 1815-26) dedicated to Louis XVI and Marie-Antoinette, to salvage the former king and queen’s reputations. During the 1850s, art critics and novelists, including Alexander Dumas and the Goncourt Brothers, argued that Marie-Antoinette best personified French taste and fashionability. Consequently, Eugénie’s fascination for the queen drew from this contemporary trend. In 1854 Eugénie commissioned the talented portrait painter Frans Xaver Winterhalter to depict her dressed in 18th-century costume. Presented in a canary yellow dress over a crinoline skirt, the painting was a personal indulgence, displayed for her intimate circle, but the commission revealed Eugénie’s cultural politics: to align the queen’s taste in art and collecting with her own patronage.

Eugénie not only purchased memorabilia that belonged to the queen, such as a scrapbook of fabrics from her wardrobes and snuff boxes, she conspicuously deployed 18th-century paintings and decorative arts at the Imperial châteaux. Napoleon III and Eugénie reigned from the Tuileries Palace and regularly visited the chateaux at Saint-Cloud Compiegne, and Fontainebleau. At each residence, Eugénie redecorated her private apartments evoking the rococo period. She modernized the preexisting royal decors with contemporary upholstered furniture created by the great craft factories (Les Gobelins, Beauvais) and the finest cabinetmakers (the Maison Fourdinois). Eugénie not only contributed to the revival of 18th-century arts, but accounts and photographs of her interiors are recognized today as a Louis XVI-Empress style and became so influential that her eclectic mix of antiques and ostentatious furniture became the model for luxury hotel design during the Belle Epoque (c.1880-1914).

Displaying Opulence: Eugénie’s Jewelry
Eugénie turned again to Winterhalter, already a recognized talent, for her official portrait. Depicting the Empress in an opulent ceremonial gown, Winterhalter captured Eugénie's enchanting beauty and intimated that her sartorial ostentation would become a key attribute of Second Empire fashion. The portrait highlights her affection for extravagant jewelry. Napoleon III granted Eugénie access to the Crown Jewels, and offered her lavish broaches, necklaces and earrings so that his wife’s neckline displayed the affluence of the Empire. Eugénie did not hesitate to dismantle jewels to create new pieces suited to her dresses, with a pronounced preference for emeralds, diamonds and pearls. In this portrait, she wears pearl necklaces inherited from the Crown Jewels, but assorted to match the diadem in her hair with pearls and diamonds re-assembled by Alexandre Gabriel Lemonier, now at the Louvre. Winterhalter strategically placed Eugénie's right hand over her Imperial Crown, where golden eagles provide the structure for a display of emeralds and diamonds. Eugenie, like Marie-Antoinette, appreciated diamonds, as captured in Francois Kramer’s Great Bow for Eugénie’s Corsage, worn in 1855 and 1864, is an excellent example of how she conceived of dressing and jewelry as a decorative ensemble.

Worth & Vuitton: The Beginning of Haute Couture
During her seventeen-year reign, Eugénie famously changed clothes at least twice a day and insisted that her guests never wear the same dress twice. Consequently, when she commissioned Frederick Worth to exclusively design her day dresses, coats and gowns, as well as costumes for her lavish masquerade balls, she effectively helped launch his career. Eugénie and Worth first adapted sumptuous taffetas, tulles, and silks to wide skirted crinolines, later refining the look to create a bustle. Worth’s costumes created an instantly recognizable silhouette that circulated in the fashion press spreading Eugénie’s taste and reputation at home and abroad.

When Eugénie toured France as a representative of the Empire, or when, for example, she undertook her voyage to Egypt to inaugurate the Suez Canal in 1869, she employed the young artisan malletier, Louis Vuitton to provide his newly designed flat trunks for her extensive wardrobe. Vuitton’s trunks easily accommodated her many looks, his innovative craftsmanship enabling the artisan to become a successful entrepreneur at precisely the moment when travel across Europe was becoming more accessible.

Art Collecting
While the 1860s is often considered a prelude to Impressionism and modern painting, Eugénie’s art collecting focused on contemporary paintings that she acquired from the Salons in Paris. The empress often purchased religious subjects that she then donated to institutions affiliated with her charities. Eugénie constituted a private collection of paintings, sculptures, photographs, pastels and drawings. She was particularly admirative of the work of the painter Rosa Bonheur (1822-1899). Bonheur’s animal subjects appealed to the Empress who rewarded the artist with a nomination to the Legion of Honor, the first woman to receive such recognition.

Exile 1870-1920
In 1870, when Napoleon III capitulated to the Prussians marking the end of the Franco-Prussian war, Eugénie was forced to precipitously flee France.  Welcomed to England by her friend Queen Victoria (1819-1901), Eugénie promoted the Bonapartist cause from her home at Camden Place, Chislehurst and, after 1885, from Farnborough Abbey. Eugénie founded the Abbey, which is still active today, as a site for a family mausoleum. The French architect Hippolyte Destailleur (1822-1893) was awarded the commission for a neo-Gothic chapel in 1881. Forsaking her love of costume and adopting a widow’s black attire after the death of the Emperor in 1873, yet she did not allow her widowhood to constrain her lifestyle.

Profiting from the sale of some of her gems, Eugenie became an inveterate traveler endorsing modern modes of transportation, including bicycles, cars, steamships and planes. She purchased a yacht, the Thistle, and sailed to Scandinavia, Elba, and Turkey, each time packing her jewels and dresses in Louis Vuitton trunks. Thanks to her savvy financial management, she acquired a villa in Cape Martin on the French Rivera where she developed a garden and entertained such luminaries as Tsar Nicholas I, Coco Chanel, Auguste Rodin and the young Jean Cocteau. At the end of her life, she consecrated her energies to aiding soldiers from World War I, welcoming them to Farnborough, recalling her lifetime dedication to charitable causes.

Elizabeth II and the Opening of the Royal Collections
Newsfeed
See all news
Prado: A New Frame for "Mercury and Argos" by Velasquez
Narbonne: Thieves Loot the Archeological Site of Villa of La Nautique
Film Screening: "Frida Viva la vida" at the Palais Galliera in Paris
Hauser & Wirth to Open Second Branch in Los Angeles
Not to be missed
Analyses