François Pannier, a Forerunner of the Himalayan Art Market

François Pannier has endeavored to build a Himalayan art market since the 1970s, when it was non-existent. He has just made two donations, one to a museum in Cannes, the other to Confluences in Lyon. 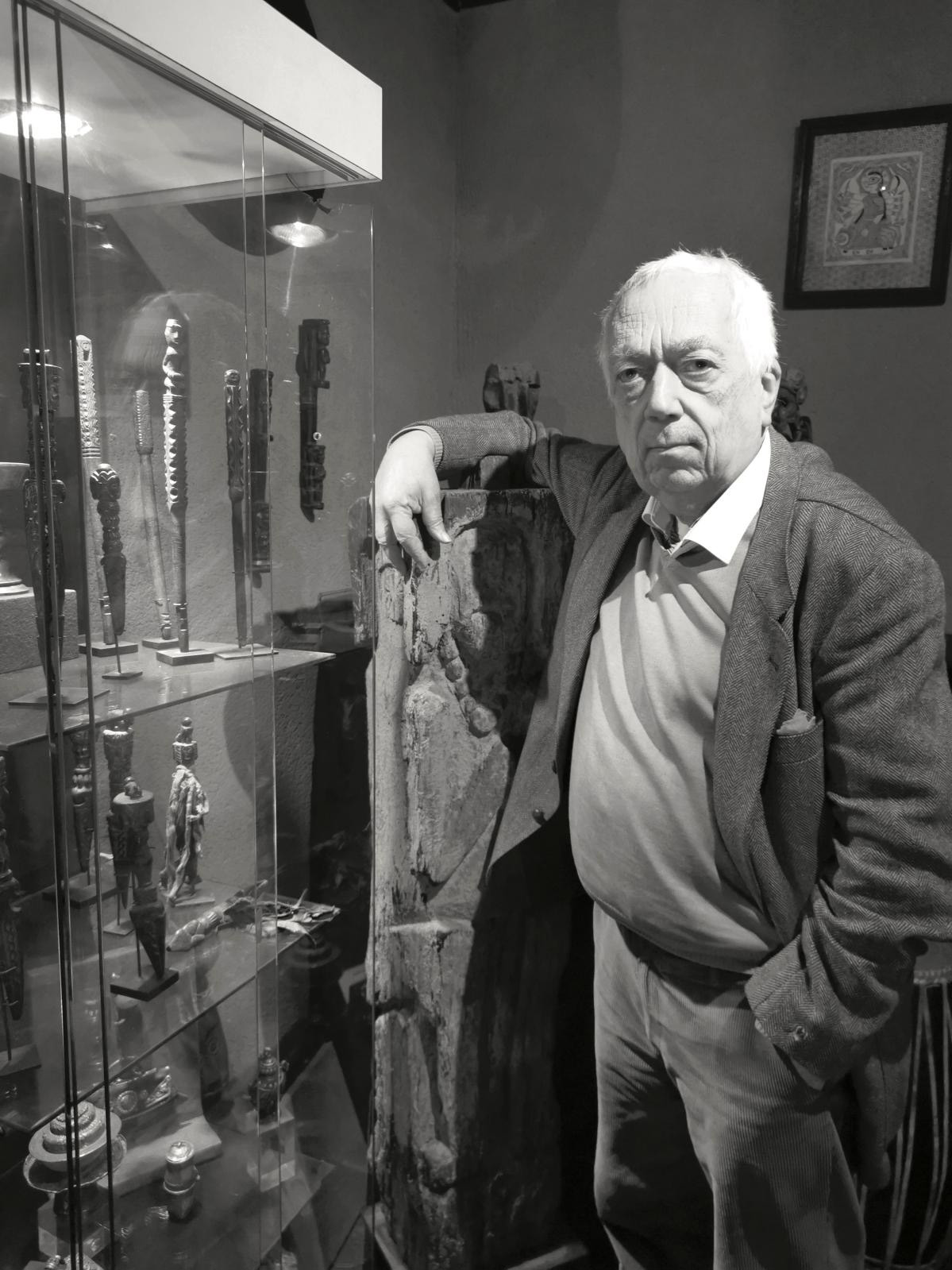 Where does your passion for Asian art come from?
It started at least 65 years ago—I’m 77! The family context had much to do with it, between one of my uncles’ libraries at my grandmother’s house in Touraine, where I spent every summer reading Arnould Galopin’s novels about adventures in Indian temples whose statues had huge rubies for eyes, the musée de l’Homme and the musée Guimet in Paris, where I went so often I wore grooves in the floors—my parents lived nearby next to place du Trocadéro—and my father’s big travel books with pictures of New Caledonia. Plus, a friend of mine’s grandfather was in Beijing during the Boxer Rebellion (editor’s note: a Chinese nationalist uprising led by the eponymous sect) and met Pierre Loti (editor’s note: writer and French naval officer). I was steeped in a context that fostered this fascination with Asia. I bought my first Chinese objects when I was about 14 or 15.

Your prior life was a far cry from art.
I started out as an accountant and a personnel manager. When I was about 37, I realized that it was time for a change because I couldn’t stand that life anymore. Since 1973 I’d already traveled quite a bit to India (Ladakh, Rajasthan, Benares, Khajurâho) and Nepal and worked for two years at the Île du démon gallery on rue Bonaparte, in Paris, which occasionally exhibited Himalayan art. Then I opened my first gallery next to the Bateau-Lavoir in Montmartre, at a time when this kind of art was unknown. Nepal opened up in the 1960s–1970s, when Barjavel published The Roads to Katmandu (1969) and the Dalai Lama left Tibet for Northern India. That’s when you could start finding things.

How did you break into unchartered territory?
It was a tough nut to crack. I spent two to three months in Nepal immersing myself in the country and its culture, and the first information came from local dealers who didn’t know what they were talking about. There was a lack of information about the objects. That led me to publish Lettres du toit du monde (Letters from the Top of the World), which focused on the discoveries we made. At first, we didn’t know what the impact would be. The first issue was about ghurras (butter-churn holders carved in wood). Later, in his book Divine support (Divine Support) collector Paul de Smedt wrote that he didn’t know what the first ghurras he had acquired at Sablons in Brussels were for. He bought them for their beauty. The dealer didn’t know anything about their purpose either. He learned the name and function from the director of the Rietberg Museum in Zurich, who showed him the relevant Letter.

How do you carry out your research?
My strength in reading and understanding objects comes from the fact that I do serious research on Egyptian, Mesopotamian, classical, Asian and Oceanic civilizations, which helps build bridges and gives me a Eurasian view of how cultures spread. For example, there’s a certain kind of mask with very Greek-looking features from Himachal Pradesh in Eastern Bhutan. It was by reading a book about Greek Dionysia by Françoise Frontisi-Ducroux, a Hellenist who was then deputy director of the Collège de France, that the connection with present-day festivals in Indra Jatra, Nepal, became obvious to me. I made the link in one of my letters, which had an impact that reached all the way to the Los Angeles County Museum of Art Collection, whose curator Pratapaditya Pal published it in India in his journal Marg.

What about the market’s evolution?
From 1975 to 1990, when demand for masks and tribal objects grew, often under the impetus of the hippies, dealers were out and about collecting in the mountains, especially the Katmandu Valley. Peddlers canvassed the area at a time when dramatic changes were already underway, with the loss of traditions that made the objects obsolete. A great abundance of masks, in particular, flooded the market. The best and the worst were all lumped together. A beautiful mask that fetched 20,000 francs on the Paris market in 1981 (editor’s note: about €7,700 today) could sell for €30,000 20 years later. Prices for the many ordinary objects didn’t rise, they even stagnated, but beautiful artifacts, which have often passed through major collections, went up in value, which, while not reaching the levels of African pieces, might now fetch tens of thousands of euros. Shamans’ daggers, phurbus, are now highly prized both for their iconographic richness and rather wide price range—€100/200 to €25,000 for an outstanding piece. Some collectors own a hundred of them!

Could you tell us something about the donations you’ve made?
Since I’m at the end of my career, I’m getting my estate organized. That’s why I’ve made several donations to institutions and museums. Two, involving shamanism, have already been made. I gave the Musée des explorations du monde in Cannes 80 items that will be the subject of a 2022 show, and about 30 to Confluences in Lyon. Moreover, under the aegis of the Institut de France, Dr. Philippe Charlier has set up a foundation called Anthropologie–Archéologie–Biologie that includes a shamanism museum to which I’m giving part of the Himalayan collection and my archives and libraries. I’m creating a research grant in the framework of the same foundation. Lastly, David C. Andolfatto, who worked at Unesco on protecting monuments in Nepal after the 2015 earthquake and wrote his Ph.D. thesis about a kingdom in Western Nepal, suggested that I make a donation to that country. At first, I found the idea a bit crazy, but it’s important to shine a light on the populations of mountain ethnic groups, who are looked down upon by the caste-based Newar society, with objects that enjoy international recognition. Given the complexity of the situation in Nepal, things are moving slowly, and although I agree with the idea, the right conditions haven’t come together yet.

BRAFA: More Appealing Than Ever
Newsfeed
See all news
Thai Artist and Activist Thanom Chapakdee Passes Away at 64
Much Anticipated Francis Bacon Painting Fetches £43M in London
New Director of Copenhagen Contemporary (CC) Announced
Climate Activists Glue Themselves to Paintings
Not to be missed
Interviews