This former flea market dealer is a fervent champion of 20th-century architects' furniture. Forty years after he discovered Jean Prouvé's pieces, his enthusiasm is as burning as ever. We look back at a success story that led to the rehabilitation of a whole area of design. 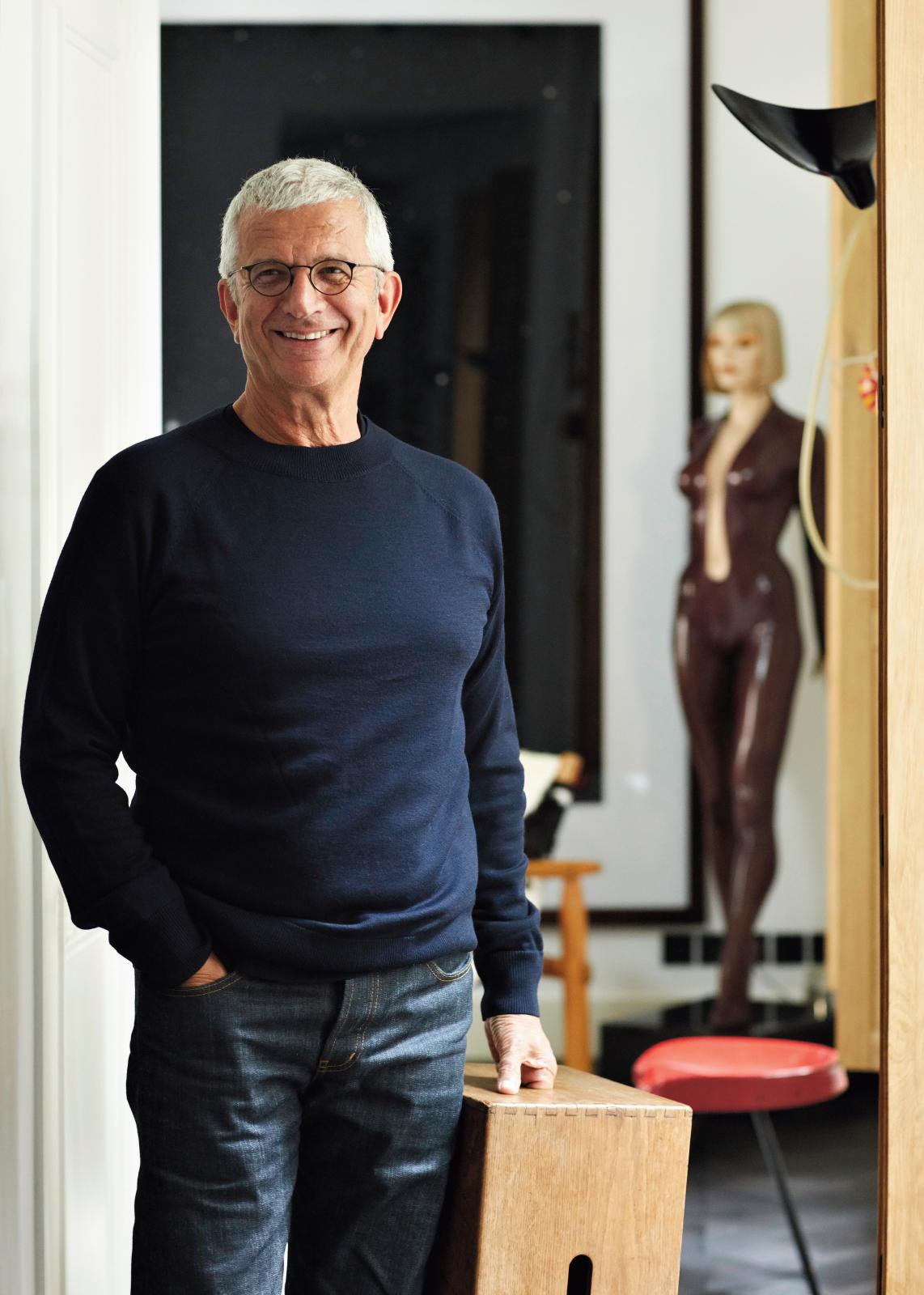 You honed your skills as a dealer at the Saint-Ouen flea market in the late 1970s. Do you still visit it?
The spirit of the flea market has changed a lot, but I still like going there. At that time, decorated stands didn't exist: you stuck the object on the ground and that was the sole attraction. By 10 in the morning, it was all over! Many major Art Deco dealers learned the ropes there. This was in the early days, when 20th-century aesthetics were only just starting to be appreciated. You could find objects nobody wanted: magnificent pieces by Chareau, Rateau, Printz—and Gallé, too, whose work was eagerly collected by the Japanese. So it was a marvelous period for discoveries. Today, the market has gone the other way: designers create collector's items right from the word go; there's no longer the stage of "it's now worthless".

You suggest that no more pioneering is necessary in the design market...
No: in spite of this, many things are not considered at their true value. There's a real disenchantment with everything designed in the 1980s. The same goes for post-modern furniture, like Michael Graves's. Take Philippe Starck's design: not many are interested in it. Why? Because he is associated with the mail-order firm Les Trois Suisses and mass production. And yet he is one of the great designers of the late 20th century. He created extraordinary ambiances perfectly in tune with their times. To benefit from a revival, it's not enough to have been forgotten: there's also the aspect of reflecting a way of thinking. This is what explains the success of architects' furniture: it is underpinned by a philosophy that's all about improving living conditions through furniture and architecture. I've learned a great deal from these worlds. Perriand was close to artists; she would collaborate with Léger. The same went for Prouvé, who asked painters like Bernard Quentin (who died in June) to work on the chromatic range of his buildings.

Is it true that you bought your first pieces by Jean Prouvé for a song?
I firstly bought furniture by Jean-Michel Frank, which you could find at the Emmaüs charity store—when the cabinetmaker had furnished the mansions of leading families in the 16th arrondissement. Talk about a far cry! Then I got bolder and took a chance on Jean Prouvé. And, for instance, I couldn't understand why Sonia Delaunay's work was wildly acclaimed when the furniture she had designed with Perriand for the Tunisian pavilion at the Cité Universitaire was being chucked out. I was lucky enough to pick up pieces of this quality for around ten francs. I couldn't afford anything else anyway! I also liked the idea of being out of the ordinary. When I moved to Saint-Germain in 1982, passers-by asked me if I was opening a second-hand office furniture shop—while I felt I was being incredibly modern.

The design market is often described as opaque. What do you think?
No—why? Well, it's true that we don't know all the origins. In design, I think there is above all a discrepancy between the way people perceive objects, like a "simple school chair" by Jean Prouvé, and their price, which reflects their historical value. Regarding fakes, there are certainly a few around, but no more than in other spheres. I was able to buy the archives of the Steph Simon Gallery, which championed Charlotte Perriand in the 1950s; this means we can provide guarantees to our customers.

Why did you take part in the Nomad show in St. Moritz for the first time?
I felt that Switzerland was a promising destination because many of our collectors have houses there. And as Charlotte Perriand was passionate about skiing, she furnished her chalet herself, so we thought we would dedicate a stand to her, mixing furniture and drawings. These show that she had a real project involving the organization of space in her home.

“Many things are not considered at their true value. There's a real disenchantment with everything designed in the 1980s. The same goes for post-modern furniture, like Michael Graves's.”

How far has the cancellation of fairs impacted your business?
The consequences are regrettable, even though we have managed to maintain links with our customers, and sales, by sending out newsletters. Fairs provided a terrific opening for the gallery. It started with the Biennale des Antiquaires, which has always been my dream and continued with the PAD, which fostered a sense of modernity and helped many dealers like me. After that, Design Miami took us into the world of contemporary art, enabling us to situate our work more broadly. Nonetheless, we hope not to go back to this trend for escalation, which risks reducing the offer in the long run.

What accounts for the success of Perriand's furniture with collectors, especially those keen on contemporary art?
Charlotte Perriand imbued the world of furniture with a new sensuality, with a focus on the pleasure aspect. Take this table "à gorge": its sloping, streamlined legs open up a perspective. The gouged line on the top is like a streak of light giving sophistication to a rustic base. Later, instead of simply designing a top as a rectangle, she invented a "free" shape based on her observation of nature. She also found endless technical solutions, one of many being sliding doors designed to avoid the piece being disfigured when open. Lastly, Perriand's furniture does not compete with art, because it doesn't capture all the attention. There is a real humility in her work.

Does her work still need promoting? It seems a bit like a two-tier market...
Yes, and it's definitely because she's a woman. The exhibition at the Vuitton Foundation showed that she had to carve out a place for herself in a man's world. Recognition came gradually, through our work and her daughter Pernette. She is now firmly established as one of the great 20th-century designers. But because a large number of her pieces were produced, it's possible to buy an original at a very reasonable price. It won't be one-of-a-kind, but it will be authentic. The most sought-after are those made for private commissions: exceptionally fine tables, desks and bookcases.

Who has the most robust price index out of Perriand, Jeanneret, Prouvé and Le Corbusier?
For a long time the market focused on Prouvé's furniture and with some pieces it was sometimes unclear whether Perriand or Prouvé was the designer, but they are now on the same level. Le Corbusier remains a small market because not many of his pieces were produced. With Pierre Jeanneret, prices are well below theirs, but he is popular throughout the world, and his armchairs have become iconic over the past few years.

It's been said you are planning to open a sculpture park…
I have always loved sculpture, especially Takis's work, which I have been collecting for thirty years, thanks to my friend Bob Calle, Sophie Calle's father. I've bought some large open-air pieces I'd like to exhibit. This goes hand in hand with my love of French gardens, like Vaux-le-Vicomte and Versailles, because they reflect a real philosophical concern in this relationship between nature and culture: aspects that also interest me in design. Just placing a sculpture in a landscape transforms it profoundly.

The Downtown gallery
in five key dates
1980-1982
Opening in Rue de Provence, in the Drouot neighborhood, followed by a move to 18 Rue de Seine.
1987
Jean Prouvé "Furniture 1924-1953" exhibition
2004
The gallery negotiates exclusive rights for Ron Arad's furniture in France
2007
Purchase of the Steph Simon Archives
2019
Publication of a book on collectors' interiors: Living with Charlotte Perriand.
Downtown Gallery, Paris VIe, is on Instagram

The Victorious Return of a Young Roman Prince

A "Type Plots" Bookcase by Perriand in Saint-Lô

Antique Dealer Laurence Vauclair and the Art of Entertaining
Newsfeed
See all news
Is Battersea Power Station Now a Playground for the Super Rich?
Colorado Artists Unite to Advocate for Missing and Murdered Indigenous People
Tourist Denied A With Meeting Pope Francis Smashes 2 Antique Statues
Digital Illustrator, Grzegorz Rutkowski, is Bigger Than Picasso on AI Platforms
Not to be missed
Interviews