François Chladiuk, in the Footsteps of the Lakota

François Chladiuk has had a passionate interest in the Far West since childhood. He has put together one of the most comprehensive collections of Native American artifacts and Wild West Show memorabilia, now on display at the musée des Confluences in Lyon. 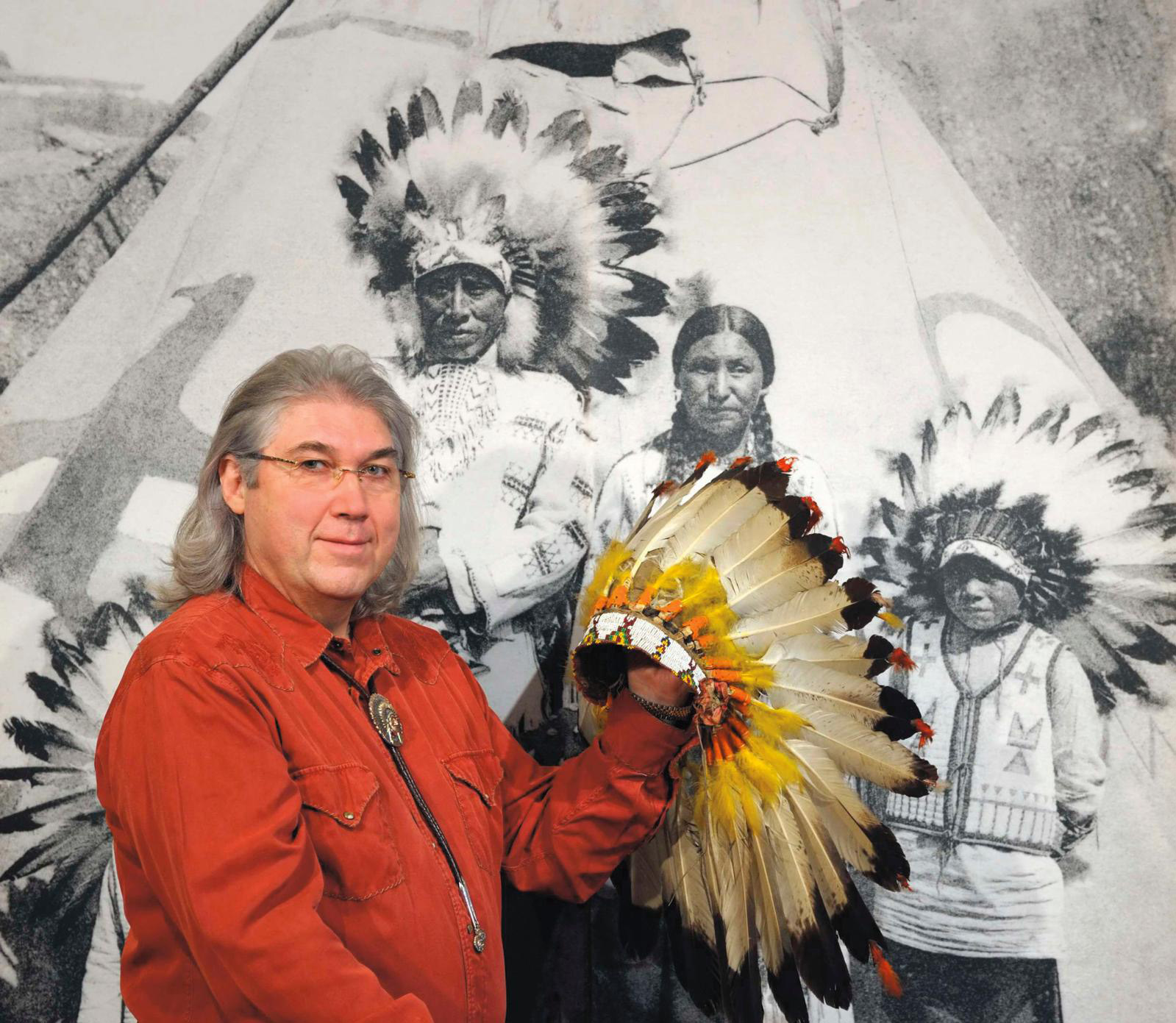 How did your interest in Native American and their culture come about?
As a little boy, I watched TV Westerns like Bonanza and played cowboys and Indians. And I’m still doing that it, so to speak. My passion for the American West has driven me since I was very young.

How long have you been a collector?
Since always! I think you’re born one. I come from a working-class family that never collected anything. I’ve always wanted to collect genuine items. I like old objects and the historical dimension. I started my Far West collection with an 1873 Winchester rife, a beautiful gun that embodies everything I loved about Westerns. It’s the 'Gun that Won the West,' a legendary rifle that’s not as deadly as modern ones.

At first, I mostly bought objects with cowboys and Native Americans on them, especially tobacco jars and desk sets. Then I gradually started looking for Buffalo Bill’s Wild West Show memorabilia. The European market is well supplied because the shows toured Europe often between the 1880s and 1935.

How did you put together the outstanding collection of Lakota costumes and artifacts currently on display at the “Sur la piste des Sioux” (“On the Trail of the Sioux”) show at the musée des Confluences in Lyon?
In 2004, an antique dealer in Brussels got in touch to show me eight metal trunks filled with Native American artifacts. Opening the first one took my breath away. I saw about 30 pairs of moccasins that I immediately recognized as genuine pieces from the 1920s-1930s. But I remained stone-faced and didn’t take anything out of the trunks because otherwise, he would have raised the price. I bought them largely sight unseen. And I didn't even know what a fabulous story I was going to discover inside.

What did you find?
At home the next day, I finally unpacked everything and found amazing clothes, ornaments, accessories, and musical instruments: 158 objects in all. First, I tried to find out whether they really were period pieces. Seeing that the glass beads were old quickly reassured me. The objects were in good condition and the colors were still very bright. I also found a 1956 diary with some Native American names written down inside. The owner, a man by the name of Auguste Hermans, was the objects’ first purchaser. He bought them from about 15 Native Americans at the 1935 Brussels International Exposition.

So I started looking for pictures of the exhibition, especially by placing classified ads, to see if a connection could be made with the items. I managed to acquire a number of them and, cross-referencing with my own photo collection, could identify 34 pieces and the names of the Lakota Sioux families who were in Brussels in 1935: Littlemoon, Little Boy, Little Elk, Spotted Owl, and others. The first photo we found is of the Littlemoon family. I was in seventh heaven when I identified the first item, an embroidered beaded vest worn by Al Littlemoon, then a little boy.

That's how the Littlemoon family came into your life. When and how did you track them down?
At one point, the story got bigger than the collection and became even more beautiful: I met some members of the Littlemoon family. After showing the collection for the first time at the Royal Museums of Art and History of Belgium at an exhibition called “Les Indiens à Bruxelles” (“The Indians in Brussels”), in 2006 I went to the United States to make a documentary for “Reporters”, a program on RTL – a Belgian-Luxembourg television channel. I started looking for the families of the Native Americans identified in the pictures from 1935. The trail led to the Pine Ridge Reservation in South Dakota, and after a few adventures, I managed to find the Littlemoons. First, I met Moses, then Walter, Joe and Rose’s last surviving sons. Moses died a year later, but Walter and I are close; we’ve become real friends.

Your meeting with the Littlemoons took you far. What’s happened since then?
Journalist Thomas Misrachi contacted me after the documentary aired on RTL. His grandfather, Claude Misrachi, had become friends with Al Littlemoon, Joe and Rose’s eldest child, who gave him a pair of moccasins. Claude told me that he wanted to give them back to the Littlemoon family. Walter was very moved by this, but he asked me to keep them so that they could be exhibited with the rest of my collection. Acquiring pieces like these, being able to trace their provenance and authenticate them with help from a direct descendant, is a collector’s dream come true!

I wanted a book to tell the whole tale. A beautiful book, because I consider the story behind the collection to be more important than the collection itself. Steve Friesen, who was head of the Buffalo Bill Museum and Gravesite in Colorado, agreed to write it with me. It took us five years! We submitted it to the University of Oklahoma Press, the best publisher in this field. It came out in 2017 as Lakota Performers in Europe: Their Culture and the Artifacts They Left Behind. The next year, it won a Western Heritage Award for best non-fiction work from the National Cowboy & Western Museum in Oklahoma City and best historical illustrated book from the Western History Association.

Does the beautiful story end here?
Far from it! I’m proud to show my collection at the musée des Confluences: it’s a huge honor for a small private collector to exhibit in a major public museum. If we got there, it’s thanks to research and a bit of luck, too. This group of objects is the collector’s Holy Grail because it’s very well documented. It’s certainly the world’s largest and best-documented collection of Native American objects connected with the Wild West Show. I’m trying to do more, but it’s not easy. What I’m looking for most actively are documents, especially pictures. I’m currently talking to someone who has two albums with 72 photos of "my Native Americans", which I hope to be able to buy soon. It would make a great Christmas gift! Beyond that, I need to do something with the collection to make sure it’s preserved intact. I’m thinking of giving it to an institution: this story deserves to be told and shown.

The Curtain Rises on a Drawing by Paul Cézanne