A painting by the great Jean-Honoré Fragonard was discovered by Mr. Petit, in Épernay, and the Cabinet Turquin. This Philosopher has not been seen since 1779, and gets spring off to a spanking start. 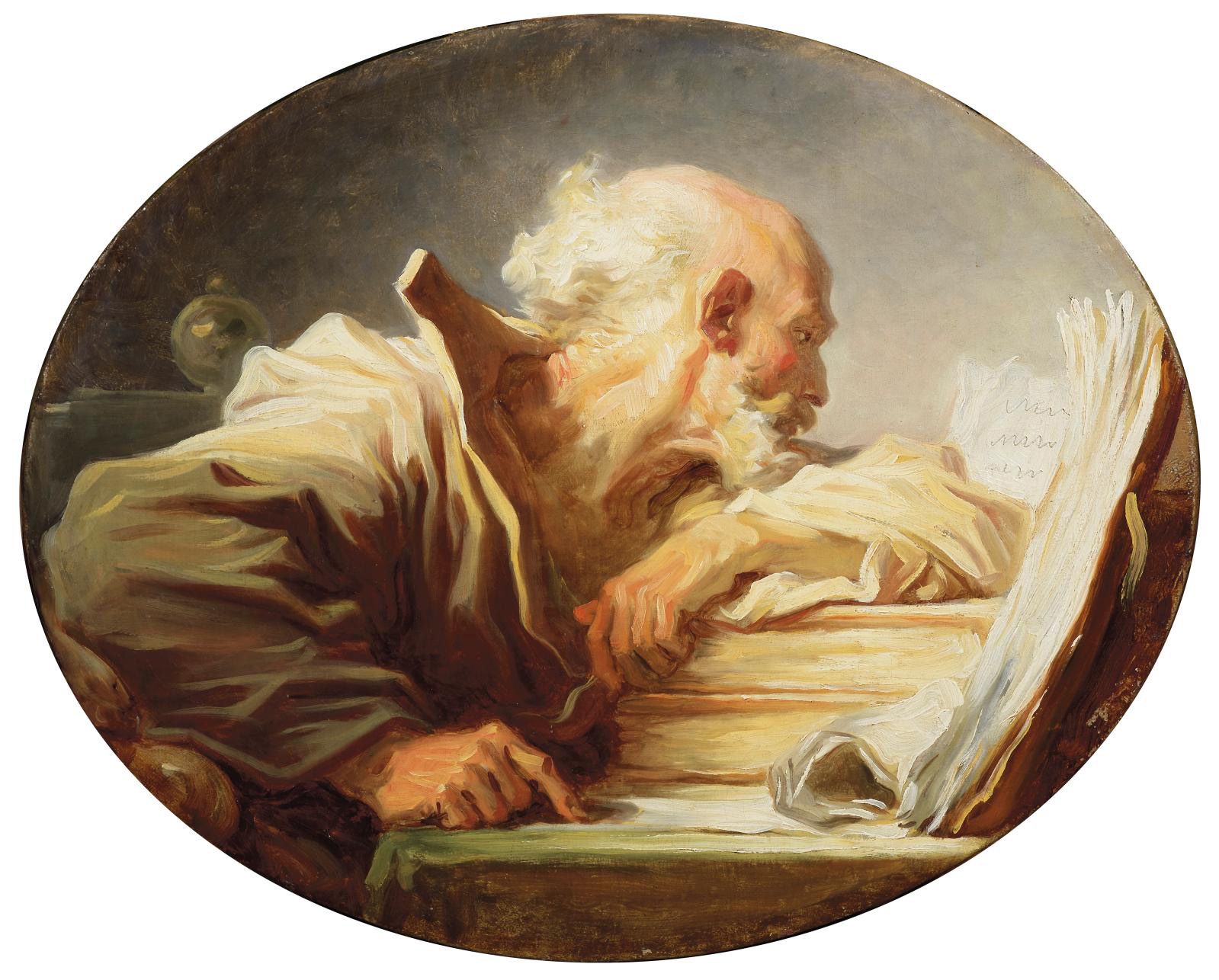 Many still remember the morning of March 4, 1998, at the Hôtel Drouot, when a famous "eagle eye" of the Quai Voltaire recognized Fragonard's yellow in an extremely dirty canvas hanging from a half-broken frame. He immediately made the connection with a sketch by Saint-Aubin in the margin of the 1776 Verrier catalog, picked up the phone to inform the powers that be, obtained a veto in a matter of seconds—budget no obstacle—and this sale with no catalog went down as an international event a few hours later. Fragonard's Saint Pierre pénitent (Saint Peter the Penitent), which fetched FF8 million, thus made a majestic comeback after an absence of 222 years. It took 240 years for the old man here to show his face again...

All hope of finding him had died. Although the dealer and art historian Georges Wildenstein gave the work an independent entry in his catalog of Fragonard's paintings in 1960, his successors readily confused it with the Hamburg painting. A "Saint Jerome Reading, Full of Verve" by Fragonard is described by the miniaturist Pierre Adolphe Hall in his "List of oil, pastel, gouache, watercolor and miniature paintings making up my collection, with the prices they have cost me, 1778, May 10". The list, published by Villot in 1867, did not include measurements. The following year, an oval painting 24 by 18 inches (64 cm wide by 48 cm high) appeared in the so-called "engraver of Ghent's" sale. Depicting "a bald philosopher with a white beard; he is seated, and has his eyes fixed on a large book; the touch is bold and generous; the wise and skillful hand of its creator is recognizable in this piece", it perplexed many a specialist trying to identify it. However, Burton Fredericksen recently swept aside all confusion about this 1779 sale by proving that Pierre Adolphe Hall was the principal seller, as an "A" appeared in the margin of the copy of the catalog (now in The Hague) by the works he had mentioned in his list the previous year. So there is no longer any call to distinguish the 1778 from the 1779 painting, let alone see in the 1779 description the Hamburg Kunsthalle's Philosopher Reading (59 x 72.2 cm/23.2 x 28.4 in), the only known oval painting by Fragonard matching the subject. The reappearance of this "new" philosopher thus changes the game, especially as the format seems much more consistent.

The date of the work is clear. At the same time as his "Figures of Fantasy", Fragonard was also working on a group of old men paying tribute to Tiepolo's aged, turbaned sages. These "flavorsome" paintings, to quote the catalog of Boucher's son-in-law's post-mortem sale in 1770, are all bravura pieces executed in a very short time with all the fiery energy of a Rembrandt or a Frans Hals. The Goncourt brothers were often wrong, but it must be admitted that they produced unrivaled dynamic descriptions of the "virtuoso sketcher": "Fragonard went further than anyone else in this quickfire painting that captures an impression of things and pitches them onto the canvas like instant images. In this vein, we have some truly amazing feats, marvels and figures that reveal him as a phenomenal fa presto artist."

The Intense Culmination of a Transient Situation
Fragonard's virtuosity and rapid, energetic "way of doing" all reflect an irrepressible need to paint and draw. If he had not been a painter, he would have been a sculptor. Here he turns around his figure, conceived in the round with an incomparable sense of light, and handles the generous material as a sculptor would clay. The presence of his fingerprints is certainly significant, evidence of his sheer pleasure and joy in this spirited confrontation with color, going back over it on occasion by reversing his brush to apply three small griffoni with the handle. He voluptuously models the twirling forms—what marvelous lightness and skill has gone into the folds of the garment—and illuminates his subject with extraordinarily vibrant energy. The work embodies his fervent delight and elation in painting: that is certain. But we should not be deceived: this remarkable, magical intoxication is in no way a spontaneous or haphazard impulse, but the result of mature reflection and a culture full of subtle allusions aimed at a highly cultivated society.

Fragonard captures an instant. His aesthetics dictate that this precise point in time has its own singular pictorial eloquence, and expresses the intense culmination of a transient situation. While the "Hamburg Philosopher" discovers a thought or an image in a state of near amazement, this one, with breathtaking wisdom and serenity, checks his writings page by page—the first two or three leaves are rolled up. Through Fragonard's use of different shades of yellow, the figure becomes one with the books and the manuscript. The desire and striving for authenticity forming one of the main pillars of 18th-century thought conveyed here through this work on color, enable him, in one stroke, to express the endless quest for knowledge the Age of Enlightenment and the Encyclopedia alike. Essentially, this is one of the most pregnant images of the artist's time. We have been deprived of it for over 200 years—but the wrong has now been righted.

A Princess of Royal Blood Glorified by Jean-Marc Nattier
Newsfeed
See all news
Paris: Open House at the Père Lachaise Workshops
Preemption: Romanelli's "Justice" Is Heading the Musée du Grand Siècle
A Diamond Cross Pendant Fetches €673,100 at Drouot
London: Will the "Portrait of Omai" Enter the Collection of the National Portrait Gallery?
Not to be missed
Spotlight