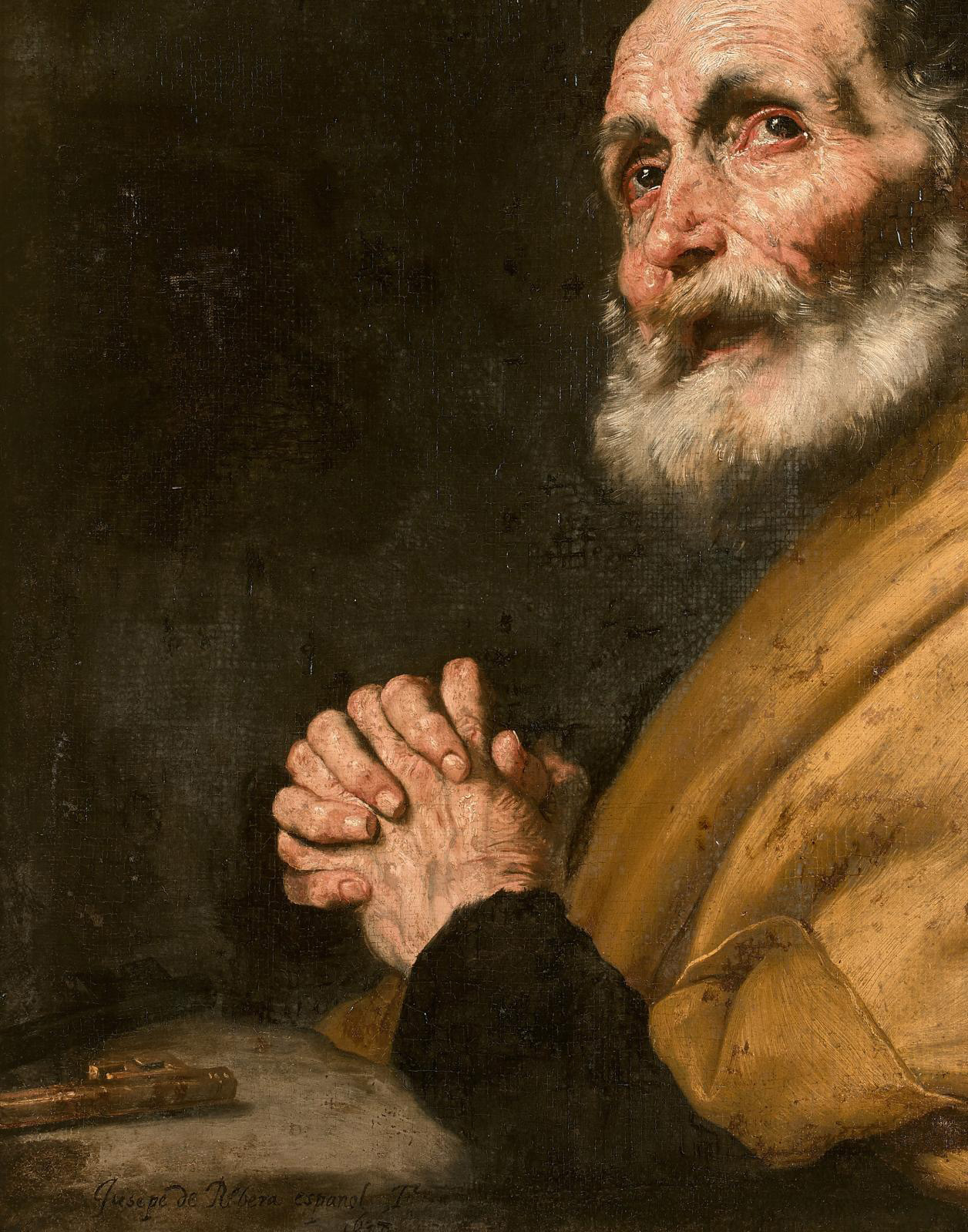 Rediscoveries are legion, but those that are already established works are rare. This painting is signed, certainly, but above all, it is listed. In the volume published in 2019 in honor of Nicola Spinosa, Francesco Petrucci, curator of the Chigi Palace in Ariccia, gave a precise list of the Neapolitan works in the Chigi Collection. One was a Saint Peter, described in detail in the inventory made in the early 1670s at the Palazzo Chigi ai Santi Apostoli, the Roman residence designed by Bernini for Cardinal Flavio Chigi, then in his 1692 inventory, and finally in that of his cousin, Agostino Chigi in 1698. So here it is, as proved by a wax seal on a fragment of the original frame, removed by a restorer some fifty years ago and preserved to good effect.

We are in familiar territory. Flavio Chigi, Bernini's patron, appears on the tapestry of the "History of the King", The Audience given by Louis XIV to Monsignor Cardinal Chigi at Fontainebleau on July 29, 1664. The story is famous. After the "Corsican guard affair" (when a page of the French ambassador in Rome, Charles de Créquy, was murdered by a papal guard), the King of France seized Avignon and the County of Venaissin in reprisal and demanded an apology from the pope. Flavio Chigi, Alexander VII's nephew, gave the king The Heroic Battle (Paris, Louvre Museum) by Salvator Rosa, one of his protégé painters, and also brought with him works by Leonardo, Il Borgognone, Titian, Pietro da Cortona, Guercino, Guido Reni and Agostino Carracci. Flavio Chigi, a keen lover of theatre, philosophy and antiquity, had already acquired land in Ariccia, where Bernini designed the palace we know today and where the pope's nephew kept portraits of the 36 most beautiful women in Rome. The cardinal lived in grand style in this Holy City. In his Casino alle Quatre Fontane, he and his sister-in-law Maria Virginia Borghese staged the famous 1668 gastronomic banquet in honor of Caterina Rospigliosi, to celebrate the political union of the two families a year after Clement IX Rospigliosi ascended the throne at St Peter.'s This lover of good food, handsome flesh and painting had a fondness for Ribera, and owned up to seven paintings by the artist.

A Piece of the Ribera Puzzle
The Penitent Saint Peter was known through a copy, possibly by the studio, now in the Musée des Beaux-Arts in Carcassonne. Another autograph version with some variants (especially in the angle of the head), which was copied many times, is in the Soumaya Museum in Mexico City. Nicola Spinosa had dated this to 1630-1631, but it must now be placed later in the chronology since everything suggests that the far more spectacular painting in the Chigi collection is the prototype. A very similar Saint Peter, but with his face tilted to the left, is also in the Hermitage Museum in Saint Petersburg. All of them belong to what the specialist describes as the painter's "neo-Venetian shift", when he abandoned the naturalism of his early years and tuned into the new artistic styles being explored in Rome, Genoa and Palermo. In 1638, Ribera was invited to decorate the nave of the Charterhouse of San Martino in Naples, for which he had painted a Pietà the previous year. That year he also produced his Portrait of a Musician, now in the Toledo Museum of Art (Ohio), The Old Usurer (Prado Museum, Madrid) and most importantly, a series of saints in which, using the same remarkable economy of means, he focused attention on the emotion of his figures, now all in movement, whereas his philosophers and saints of the previous decades had been posed.

Ribera also stood out for his spectacular play with sensuous material. Guillaume Kientz draws particular attention here to "the iridescence of his yellow", "the trace of the brush that digs furrows, captures the light and makes play with it," "the long brushstrokes giv[ing] an impetus that contrasts with the tighter rendering of wrinkles in the face and hands." The director of the Hispanic Society in New York points out that "while in Rome his apostles and saints seemed to be portraits of street models, in Naples Ribera developed a catalog of types. Riberesque figures in terms of both style and features filled his compositions and helped to establish canons that had a direct and lasting impact on not only Neapolitan but also Spanish painting." French painting, too, we might add, for when we look at this Penitent Saint Peter, it is hard not to think of Fragonard's old men—in particular the "new" Philosophe lisant (Philosopher Reading).

In the same sale, lovers of Neapolitan painting will also be delighted to see a Saint Jerome Writing by the Master of the Pau Supper at Emmaus, whose corpus has now been identified by Gianni Papi and Giuseppe Porzio as by the young Filippo Vitale.

A Murillo Painting Hiding in France Since 1764
Newsfeed
See all news
Is Battersea Power Station Now a Playground for the Super Rich?
Colorado Artists Unite to Advocate for Missing and Murdered Indigenous People
Tourist Denied A With Meeting Pope Francis Smashes 2 Antique Statues
Digital Illustrator, Grzegorz Rutkowski, is Bigger Than Picasso on AI Platforms
Not to be missed
Spotlight