Fabrizio Moretti, the secretary of the International Antiques Biennial in Florence, has opened a new gallery in London, where he lives. It specializes in the early Renaissance in Italy and gold backgrounds. 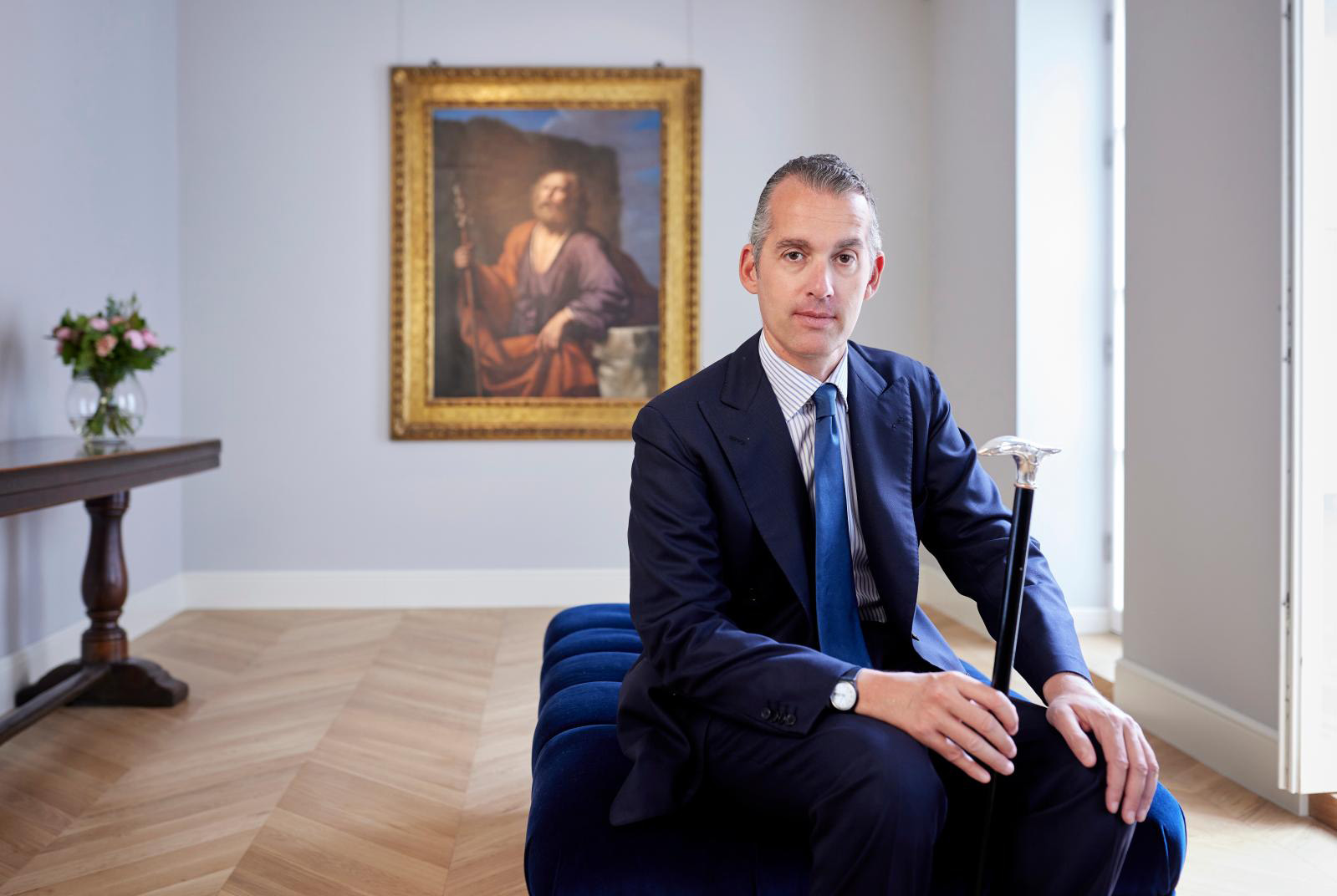 Florence-born Fabrizio Moretti, the most British of Italian art dealers, is always unflappable and never lets go of the silver knob on his walking stick that supports his graceful silhouette, which always fitted into perfectly cut suits. But it is his work, not his elegance, that says London. On July 1, Mr. Moretti opened a new, 800m2 (8,611 ft2) gallery stretching out over two 17th-century buildings at 12-13 Duke Street in Mayfair during London Art Week. “Brexit may have scared off some colleagues to the continent, but it didn't change anything,” says the gallerist, who opened his first address abroad in 2004. “For the moment, London remains the world’s irreplaceable art center, both old and contemporary art. The new gallery is my most beautiful space and I want it to become a reference for museum directors, exhibition curators and high-end collectors. That’s why Letizia Treves (editor’s note: art historian and curator of the National Gallery’s 2020 “Artemisia Gentileschi” show) joined me for this project. London is a crossroads where you meet the art world’s most important people”.

The Paternal Turf
Mr. Moretti’s home port is Florence, where he was born on December 6, 1976. His mother, Kathleen Simonis, is British, and his father is a famous Renaissance art dealer who transmitted his passion to him. The younger Moretti’s other devouring passion is equestrian sports, but a bad fall kept the outstanding rider from competing in horse shows. His talent was destined to be expressed on his father's turf without ever competing with him or being influenced by his tastes. “He had given me complete freedom and in any case retired when I was 17,” says the gallerist. “I studied the humanities and started working for one of my father’s art dealer friends before starting to write exhibition catalogs. At 22, I opened my gallery, focusing on 14th to 16th-century Italian paintings, especially those with gold backgrounds.” success, and the desire to develop his activity abroad was immediate. However, Mr. Moretti was hobbled by excessive red tape, which admittedly protects Italian heritage but makes it particularly difficult to export works. He moved to London in 2004, New York in 2007 and Monaco in 2017. His continuous participation in London’s Frieze Art Fair and Maastricht’s TEFAF helped him master all the intricacies of a market where he quickly made his mark. He sat on their executive boards and since 2014 has been secretary general of the International Antiques Biennial in Florence—the old art market’s most prestigious event in Italy.

Want to receive news and updates about auctions?
Sign up for our newsletter
Della Robbia, Cimabue and Caravaggio, to Name a Few
Wealthy collectors are not Mr. Moretti’s only clients. He has sold many paintings to the world’s leading museums, including several by Beato Angelico to the Uffizi, Guido Cagnacci to New York’s Metropolitan Museum, Artemisia Gentileschi to London’s National Gallery, Andrea della Robbia to the Abu Dhabi Louvre and Canaletto to the Getty Museum in Los Angeles. “Selling to museums is deeply rewarding because they are the elite of the art world,” he says, “but the thrill of selling to a private collector is doubled by the pleasure of knowing that the work might come up on the market again one day.” Mr. Moretti experienced that excitement on October 27, 2019, when Christ Mocked by the Tuscan master Cimabue fetched €24.18M at the Actéon auction house in Senlis. Estimated between four and six million euros, the painting was found in Compiègne in the kitchen of a woman in her nineties. The result was the highest price ever paid for a work by an Italian early Renaissance artist, making the small poplar wood panel (20 x 26 cm/7.87 x 10.23 in) the world’s eighth-most expensive Old Master painting. The sale also managed to crack Mr. Moretti’s legendary composure. “I cried tears of joy,” he recalls. The art dealer acquired Christ Mocked on behalf of two collectors before it could be declared a National Treasure. He certainly also stifled tears of frustration when in April 2021, at the last minute, the Spanish government blocked the sale of The Crown of Thorns, lot 229 in the catalog of Madrid’s Ansorena Auction House, whose starting price was €1,500. Mr. Moretti was in the room. “For me, there was no doubt. The brilliance of the torso, the three-dimensionality of the three figures staggered in an almost cinematographic sort of fade-out, the color of Christ’s mantle, the painting’s dimensions: this was an Ecce Homo by Caravaggio, one of the most stunning discoveries in recent years. I immediately flew to Madrid to buy and resell it. The painting might be worth at least €200M and museums like the Getty in Los Angeles already seemed interested.”

Observing and Evolving
"Interest” and “passion” are one and the same for Mr. Moretti as well as most of his clients. Old Masters is a niche market with a limited number of buyers and works. “The motivation in our sector is more romantic,” he says. “We play a chess game where speculation plays almost no role, unlike in contemporary art, which is bought as an investment." However, he admits that the Old Master art are not totally exempt, observing a strong polarization of supply accentuated in the past two decades by the financial crisis and the Covid-19 pandemic. “The middle market, which could satisfy certain well-heeled buyers and ushered in the golden age of the 1980s and 1990s, has disappeared, crushed between works of very high value and more affordable ones. Collectors now want unfindable great names, while previously they sought minor artists. The anthropological upheaval we’re going through is to blame. The education system is in crisis. Young collectors are less and less cultivated and losing interest in old art, without which the true value of contemporary art cannot be appreciated.” Mr. Moretti’s blunt observations of the changes underway does not mean that he disregards or neglects them. He has invested in NFTs, a market, according to him, that will continue growing and structuring itself. Although he remains deeply attached to the tangible character of art, his London and Monaco galleries will be present in the metaverse. But his horizons are in the real world. "The major international art events have gradually killed off private galleries, whose model remains relevant because they alone can offer the highest quality in relation to market demand,” he says. And while his heart beats in London, he is looking toward Asia. “Why not open a gallery in Shanghai?” he jokes. “If I were 20, I’d jump at the chance and try to raise the Asian public’s awareness of old European art.”