Labeled an art center of national interest in 2020, the Espace de l'Art Concret, in Mouans-Sartoux, in Provence, is celebrating its 30th anniversary a year late. Its director looks back on a project born of the passion of two artists and collectors: Sybil Albers-Barrier and Gottfried Honegger. 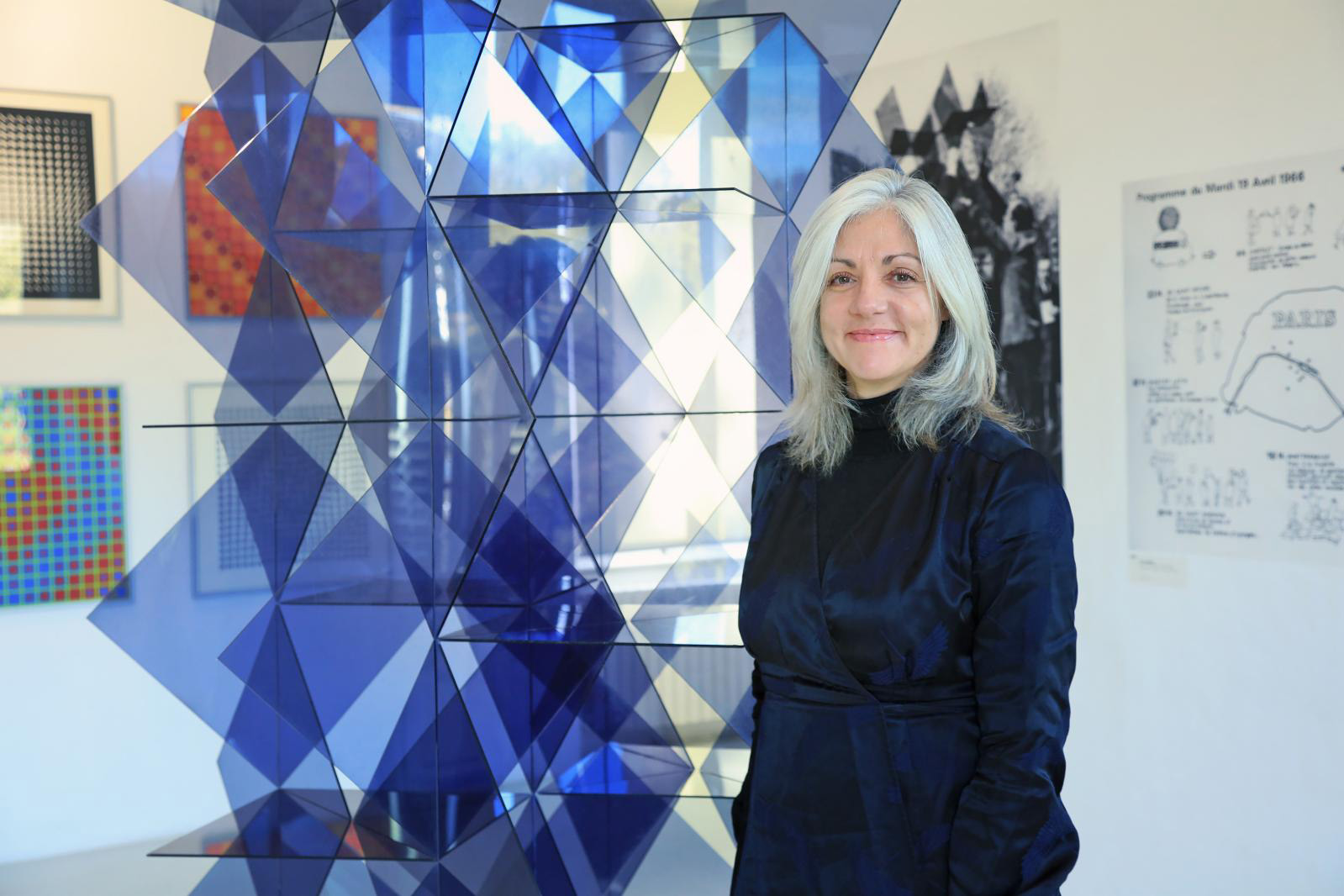 How would you describe the Espace de l'Art Concret (EAC)?
This place is rather a rare bird in France because it is an art center holding a collection dedicated to geometric abstraction, conceptual and minimal art, which was given to the State in 2000 by its founders, Gottfried Honegger and Sybil Albers, after ten years of activity. Since then, we have been managing a collection that belongs to the Centre National des Arts Plastiques and is on loan at the Espace de l'Art Concret. This particularity has changed our role: beyond our support for contemporary creation, we are also involved in conservation, development and dissemination, as well as our increasingly important educational action. For the past 20 years, artist's residencies have also provided opportunities to shed light on a particular aspect of the collection. In 2018, Katrin Ströbel, for example, was interested in reassessing the place of women in the art concret movement, with a particular focus on Dadamaino's work.

This brings to mind Vera Molnár, whom you are currently exhibiting. Why did women play such a small role in the movement?
It must be said that there are very few in the circle of influence represented by the Albers-Honegger collection, apart from Aurelie Nemours, Marcelle Cahn and Dadamaino, to mention a few. At 97, Vera Molnár really doesn't enjoy the recognition she deserves in France, given the importance of her work as a pioneer of digital art. When I asked Gottfried Honegger why he hadn't bought some of her works at the time, he said he regretted having missed out. Our temporary exhibitions compensate in some way for this lack of representation and are also a chance to collaborate with other institutions, like the Musée des Beaux-Arts in Rennes, which is hosting an exhibition on Vera Molnár next fall.

How would you define art concret?
It was mentioned for the first time in the interwar period and proclaimed the objectivity and autonomy of a visual language with no reference to external reality. Opposing both figurative and abstract art, it broke with the process involving the progressive abstraction of aspects of the real world and built its language on the exclusive use of visual elements, forms, surfaces and colors to express a clear geometrical principle.

What were the main stages in the EAC's development?
In 1990, it was set up on the second floor of the Château de Mouans. Eight years later, it was expanded with the education workshops designed by architect Marc Barani, and in 2004, with a tower-shaped building designed by Swiss architects Annette Gigon and Mike Guyer. This has five levels displaying the Albers-Honegger donation with its 700 works, classified as a national treasure. It has since been swelled by donations from Aurelie Nemours, Gilbert Brownstone, Lanfranco Bombelli Tiravanti and Emmanuel, and gifts from other artists. The last section concerns the park of the château, which was redesigned as part of a public commission assigned to Gilles Clément, in collaboration with François Navarro.

How does this hybrid place function as both art center and museum?
We are a non-profit association, and although the buildings belong to the city, we are not under its exclusive supervision. The board of fifteen members includes three representatives from the State, two from the City, one from the Region, one from the Department, two from the beneficiaries, and two people from civil society. We regularly loan out our collection, but many are not aware of its public status or our keen wish to spread the word. We have created links of proximity and interest with institutions in the region—the Maeght Foundation in Saint-Paul-de-Vence, the Mamac in Nice and the FRAC PACA in Marseille—and further afield, the Camille Graeser Foundation, the Haus Konstruktiv in Zurich and the Fine Arts Museum in La Chaux-de-Fonds. In the coming years, the challenge will be to develop further relationships with other institutions so that we can share scientific thinking and give our collection and projects a higher profile.

Does the exhibition with the Lambert Collection (donated by gallery owner Yvon Lambert to the French State, now on show in Avignon) contribute to this search for visibility?
Yes. There is also a link because both collections are supported by collectors and both resulted from a donation and belong to the Centre National des Arts Plastiques (National Center of the Visual Arts). The Lambert Collection will shed its own particular light on ours in a second phase, at the Hôtel de Caumont in Avignon.

At the EAC, how do you orient the subject matter?
I reinterpret the themes of six iconic events at the art center based on contrasts and oppositions. For example, "Voir et s'asseoir" ("Seeing and Sitting") in 1991, which highlighted our furniture collection in relation to art works, and "Le cri et la raison" ("The Scream and Reason") in 1992, which compared expressionist works by Robert Combas, Andres Serrano and Douglas Gordon with more geometrical works by Aurelie Nemours and Gottfried Honegger. Beyond this fresh look at the exhibitions, a game of mirrors between the two groups will also be evident in the rooms. The Albers-Honegger and Lambert collections were started almost simultaneously in the late Sixties and early Seventies, and reflect artistic movements of the time like minimal and conceptual art. It's interesting to present in the same exhibition artists like Combas and Jean-Michel Basquiat, whose work is light-years from the philosophy of our collection, and artists common to both collections like Daniel Buren, Niele Toroni, Donald Judd and Carl Andre.

How many visitors do you receive each year?
On average, 20,000—which is a respectable number, but not enough for us. Mouans-Sartoux is a small town of 10,000, which has no TGV or airport. In addition, the region has gained greatly in terms of artistic proposals over the last decade in a wide range of places like art centers, galleries and private foundations, thus offering a wide choice to the public.

Indulge Yourself at the Exhibition "Drouot Déco"
Newsfeed
See all news
San Francisco: New Bernice Bing Exhibition
Art Basel Miami is Shaping Up to Be a Memorable Edition
Mexico: Dealer Mariane Ibrahim to Open Gallery
Auction: Marilyn Monroe Is Once Again in the Spotlight
Not to be missed
Interviews

A well-known advisor in the microcosm of contemporary art, Laurence...