A little over two months after opening, the National Museum of Norway, designed by German architect Klaus Schuwerk, is a hit. A million visitors to this magnetic, diverse and ambitious place are expected by the end of the year. 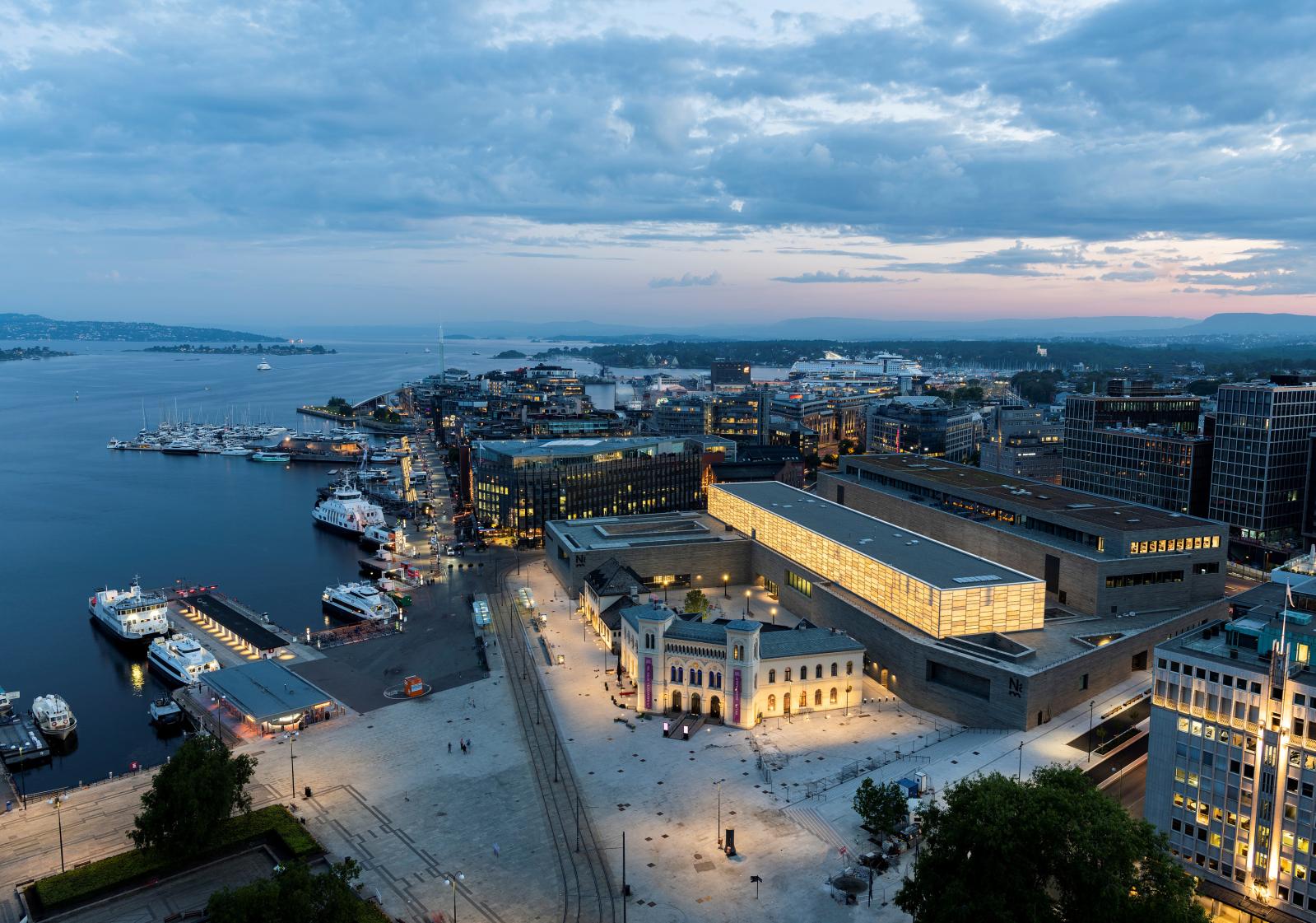 the new National Museum of Art, Architecture and Design in Norway and its Light Hall.
Photo Borre Hostland

the new National Museum of Art, Architecture and Design in Norway and its Light Hall.
Photo Borre Hostland

It’s phenomenal. Oslo is in the middle of continuous change. In less than ten years, the city has become an international artistic and cultural epicenter. Its main museums are now clustered around the port, across from the fjord. Set amidst sparkling waters, the complex is spectacular. Visiting each museum is like being on a pilgrimage combining culture and nature. The route starts on the city's heights at Ekebergparken, a park featuring a contemporary sculpture garden created in 2013. Below, an aluminum-clad 13-story tower with iridescent highlights designed by Spanish architect Juan Herreros has punctuated the landscape since 2021. This is the Edvard Munch Museum, which houses 26,000 works by the world-famous painter of The Scream. It overlooks the neighboring opera house, an equally outstanding, iceberg-shaped building designed by the Snøhetta architectural firm in 2008.

The city hall, a functionalist style building designed by Norwegian architects Arnstein Arneberg (1882-1961) and Magnus Poulsson (1881-1958), is closer to the National Museum, which opened on June 11. A real masterpiece, the gray schist and marbled glass building is monumental yet subdued at the same time. Some say too subdued. They should take another look: the second story attracts the eye like a magnet. The 130-meter-long (42.6 ft) glass façades enclose what is called the Light Hall and wonderfully dialogues with the intense natural light of the North. While it looks enigmatic from the outside, the Light Hall is actually a nearly 2,400-square-meter (25,833 sq ft) temporary exhibition space.

An Ambitious Project
In 2008, the Norwegian government decided to build a new National Museum on the site of Vestbanetomten, which leads to the banks of the Aker Brygge, a harbor area that ranks among Oslo’s tourist hotspots. The €650 M project was completed in less than eight years. With an area of 54,600 square meters (587,709 sq ft), including 13,000 sq. meters (139,930 sq ft) for exhibitions, it is one of Europe’s largest museums. The permanent collection of about 400,000 objects is housed in 85 rooms. The merger of five institutions accounts for these impressive figures: the National Gallery, founded in 1836; the Museum of Decorative Arts and Design, which dates from 1876; the Riksutstillinger (1953), intended for traveling exhibitions; the National Architecture Museum (1975); and the Museum of Contemporary Art (1988).

Visitors walk into a huge hall with clearly indicated entrances to the various departments, most of which are at the front of the building on the fjord side. The permanent collection spreads out over two floors, arranged in chronological and thematic order. The 6,500 works on display trace the history of world art from antiquity to the present day. The muted, comfortable, functional interior features display cases, benches and wall panels designed by Guicciardini & Magni Architetti and made by Goppion in Milan.

A Universalist Approach
Long successions of rooms take visitors from ancient sculptures to reconstructed period rooms, decorative arts, paintings, sculptures, design, architectural models, textiles and fashion. Major works on the second floor, which has about 30 rooms, include busts of Roman emperors; the famous Baldishol tapestry, woven between 1040 and 1190 and found in a wooden church near Nes, in Southern Norway; icons from the Novgorod School; and Chinese Ming ceramics. The universalist approach is exciting and especially convincing in its attempt to compare cultures and production methods without imposing a hierarchy. However, patriotism is not altogether left out: the first floor ends with works by Per Spook and Peter Dundas, Norwegian designers of international stature. On the second floor, 54 rooms feature other treasures, but mainly paintings and sculptures by a wide array of artists, from Allaert Van Everdingen to Ilya Kabakov, Sol Le Witt, Manet, Monet, Renoir, Morisot, Picasso, Matisse and the Nordic masters Eckersberg, Zorn and Schjerfbeck. Government subsidies, benefactors, the Friends of the Museum Association and bequests from Olaf Shou and Christian Langaard have allowed the institution to acquire works since 1837.

The museum embraces all of Norwegian art, including works by Sami artists—notably John Savio, Annelise Josefsen, Máret Ánne Sara—who until recently were marginalized. All the great names are there, from Romantics Johan Christian Dahl, Peder Balke, Adolph Tidemand and Hans Gude, who painted Wedding Procession on the Hardangerfjord together (1848), to open-air painter Frits Thaulow and Naturalist Christian Krohg with his politically charged Albertine in the Police Doctor's Anteroom (1887). The survey includes the Expressionist Munch, of course, Symbolist Harald Sohlberg, Neo-romantic Harriet Backer, students of Matisse such as Per Krohg, Axel Revold, Henrik Sørensen and Jean Heiberg, 21st-century flagship artists Anna-Eva Bergman, Per Inge Bjørlo and Irma Salo Jæger and architect Sverre Fehn.

A Dense Program
The opening exhibition, "I Call It Art", showcases famous and lesser-known artists living in Norway. In the first half of 2023, the museum will feature an impressive program focusing on foreign artists past and present: France’s Laure Prouvost, England’s Grayson Perry, Franco-American Louise Bourgeois and the Italian design team of FormaFantasma (Andrea Trimarchi and Simone Farresin). They will be followed in 2024 by Frida Kahlo, Mark Rothko and the Swedish Sámi artist Britta Margareta Marakatt-Labba.

The museum has implemented a gender parity policy for Norwegian artists in every discipline and strives to boost their profile abroad. Until December, "East of the Sun and West of the Moon" pays tribute to Erik Theodor Werenskiold and Theodor Kittelsen, who brilliantly illustrated fairy tales collected in the late 19th century by Peter Christen Asbjørnsen and Jørgen Moe. An exhibition next year will feature painters Anna-Eva Bergman, Harriet Backer and Thorvald Hellesen, while 2024 will be devoted to Else Hagen and Anne Katrine Dolven and 2025 to architect Wenche Selmer.

The museum declined to disclose its financial resources, but they seem bottomless. From September 2022 to 2025, it will host several thematic exhibitions, one more exciting than the next: "Piranesi and the Modern", "The Oslo Architecture Triennial", "From Bruegel to Rubens" and "Dragons and Logs: Architecture around 1900". "Modern Gothic" will have works by Albrecht Dürer and Lucas Cranach the Elder dialoguing with those of Munch, Emile Nolde, Gallen-Kallela and sculptor Käthe Kollwitz. The project stems from a collaboration with Helsinki’s Ateneum Museum and the Alte Nationalgalerie in Berlin. The guest curator will be Juliet Simpson, art history professor at Coventry University. The days of Oslo’s cramped, inadequate first museums are apparently over. A new era is proudly beginning with neither taboos nor an inferiority complex.

WORTH KNOWING
“I Call It Art", to September 11, 2022, and "East of the Sun and West of the Moon", to December 30, 2022,
National Museum of Art, Architecture and Design in Norway, Oslo.
www.nasjonalmuseet.no